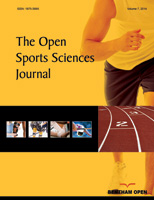 During soccer-specific movements, the strength of knee extensors and flexors is of great importance and achieving certain strength ratios between the two has been identified as an important parameter for reducing the risk of soft tissue injuries around the knee.

The aim of the study was to evaluate changes in isokinetic strength of the knee flexors and extensors and their strength ratios in elite adolescent soccer players.

Before and after 10 weeks of standard pre-season soccer training with progressive eccentric hamstring exercises, the players (n=18; age 17.1±0.4 years) participated in isokinetic testing to assess concentric and eccentric peak torque at 60°·s-1.

The results of the study indicate that pre-season training induced suboptimal changes in the isokinetic strength of the knee flexors and extensors in elite adolescent soccer players. However, the lack of injuries combined with an apparent lack of preparedness explained by slow velocity isokinetic testing indicates that future research should investigate other forms of strength testing to determine soccer-specific preparedness such as isokinetic dynamometry at higher speeds (i.e. 180°.s-1 or 240°.s-1) and traditional weight-room testing such as 1RM tests.