The renin is a key performer in the renin–angiotensin system, and it offers a resource for the beneficial action of hypertension and heart malfunction. The keto piperazine based renin inhibitors have shown greater potential and good biavaibility.

The renin inhibitory activity (IC50) was considered as biological activity. Dragon software, version 5.5 was used for calculation of physicochemical parameters. Sequential MLR (multiple linear regression) is carried out to create quantitative structure–activity relationship models, which were again evaluated in support of statistical significance and analytical capacity by inner and exterior validation.

The renin–angiotensin–aldosterone system (RAAS) is a key controller of blood pressure; it has a reno-protective function and a very significant position in the vascular reaction to the damage [1Berl T. Review: renal protection by inhibition of the renin-angiotensin-aldosterone system. J Renin Angiotensin Aldosterone Syst 2009; 10(1): 1-8.
[http://dx.doi.org/10.1177/1470320309102747] [PMID: 19286752] ]. Renin is aspartic protease, which consists of one of the four key classes of peptide cleave enzymes [2Lindsay KB, Skrydstrup T. Formal total synthesis of the potent renin inhibitor aliskiren: application of a SmI2-promoted acyl-like radical coupling. J Org Chem 2006; 71(13): 4766-77.
[http://dx.doi.org/10.1021/jo060296c] [PMID: 16776501] ]. It is concealed by the nephron in feedback to reduce circulation level and blood pressure. Renin cleaves the substrate angiotensinogen to provide the stationary angiotensin-I. Angiotensin converting enzymes convert Angiotensin-I to the pro-hypertensive agent angiotensin receptor blockers. The renin is an input performer in the renin–angiotensin structure, and its operation offers a resource used for the beneficial action of hypertension and heart malfunction.

A total of 80 piperazine and keto piperazine based renin inhibitors were included in Quantitative structure–activity relationship study as accounted in Table 1 [13Leon AJ. Piperazine derivative Renin inhibitors. United States patent US 20,040,214,832., 2004.]. IC50 (µM) values changed in logarithmic (M) values, which were used for the regression studies.

calculate values of various descriptors intended for the compounds

The Z score method was adopted for the finding of outliers. Z score can be explaining as an absolute difference between the value of the model and the activity field, divided by the square root of the mean square error of the data set. Any compound having a Z score higher than 2.5, during generation of a particular QSAR model, is measured as an outlier.

In current study authors tried to develop a Quantitative structure–activity relationship model to clarify the correlation between physicochemical parameters and renin inhibitors. A data set of 80 piperazine and keto piperazine based renin inhibitors was used in the present study.

Several equations were raised when data set subjected to sequential multiple linear regression analysis. Out of these the most statistically significant equation was regarded as the best model.

The statistical parameters for this model are presented in Table 3. The model presented above was considered as the best model due to its overall predictivity. The inter correlation between few descriptors was found to be high (Table 4), which could be owing to synergistically interacting descriptors. Furthermore, the multicollinearity arising from utilization of correlated descriptors is not a serious problem as assumed often. There are several examples of cases where pairs of highly correlated, descriptors generated the highly significant regression equations [20Patel JR, Prajapati LM. Predictive QSAR modeling on tetrahydropyrimidine-2-one derivatives as HIV-1 protease enzyme inhibitors. Med Chem Res 2013; 22(6): 2795-801.
[http://dx.doi.org/10.1007/s00044-012-0275-8] -24Prajapati LM, Parmar VK, Patel MJ, Patel JR. Development of QSAR model for indoyl aryl sulfone derivatives as reverse transcriptase inhibitors. Der Pharma Chemica 2011; 3(6): 53-61.].

Correlation among structural descriptors and with the activity.

The model displays a good (R) of 0.920 between the descriptors Sv, nDB, nO for rennin binding affinity. The squared (R2) of 0.846 indicates 84.6 % of the variance in the biological activity. This model also illustrates significance level more than 95% with F value =95.465, a low standard deviation of estimation 0.578, establish the accuracy of the model. The stability of the model evaluated by leave-one-out method is literally superior (Q2 > 0.6) suggesting the effectiveness of model for consequential predictions. The robustness of model was shown by magnitude of the R2bt (0.852), which was close to conventional R20.846). Additional help in this regard was found from the small values of the cross-validation parameters SPRESS and SDEP. The predicted R2 value of the test sets was 0.821, representing brilliant predictive capacity of the model. The calculated, predicted and observed values of biological activity are exposed in Table 5 and Table 6 respectively. The association between predicted activity (LOO) and observed of the training and test set is shown in Fig. (1 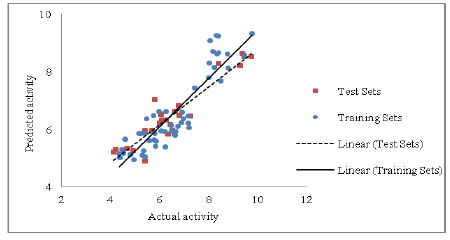 
The QSAR study revealed that Sv and nDB descriptors have positive involvement to the renin inhibitory activity while nO has negative contribution to the renin inhibitory activity. All the three descriptors are 0D-constitutional indices, which are independent from molecular connectivity and conformations [25Prajapati LM, Patel JR, Parmar VK. Descriptors requirement for QSAR analysis of pyrazolo-triazolo-pyrimidine derivative as human A3 receptor antagonists: design of novel furan derivatives and validation by docking. Med Chem Res 2014; 23(5): 2554-63.
[http://dx.doi.org/10.1007/s00044-013-0849-0] ]. The predominant positive effect of Sv can be seen by observing the most potent compounds (compound no. 18 and 62-65). All these compounds have benzo-oxazine moiety with ester or ether side chain or tetrahydro quinoline with amide side chain, which provide bulkiness to molecule as shown in Fig. (2


There are hydrophobic and hydrophilic amino acids both in the renin molecule. The hydrophilic amino acids are found outside the molecule, while the hydrophobic amino acids tends to be more on the inner side. The hydrophobic amino acids form the active site, a large hydrophobic pocket which can cover a molecule with minimum seven residues. Hydrogen bonding is the prime link between a renin and the ligand [26Matter H, Scheiper B, Steinhagen H, Böcskei Z, Fleury V, McCort G. Structure-based design and optimization of potent renin inhibitors on 5- or 7-azaindole-scaffolds. Bioorg Med Chem Lett 2011; 21(18): 5487-92.
[http://dx.doi.org/10.1016/j.bmcl.2011.06.112] [PMID: 21840215] , 27Yuan J, Simpson RD, Zhao W, et al. Biphenyl/diphenyl ether renin inhibitors: filling the S1 pocket of renin via the S3 pocket. Bioorg Med Chem Lett 2011; 21(16): 4836-43.
[http://dx.doi.org/10.1016/j.bmcl.2011.06.043] [PMID: 21741239] ]. For efficient and specific binding, the receptor cavity, in most cases, must be tightly filled with the interacting ligand. The increased van der Waals volumes could be helping the drug to place the drug residue in close proximate with amino acids in the hydrophobic pocket. The least potent compounds (compound no. 34, 39, 47, 49) are free from bulkiness provided by benzo-oxazine moiety or quinoline rings in Fig. (2

). Positive contribution of nDB indicates that introduction of extra aromatic/heterocyclic ring or doubly bonded hetero atom increases the binding affinity. It is clearly seen that all the most potent compounds have extra one or two carbonyl group either as an ester or an amide. The little negative effect of descriptor nO is due to replacement of ether linkage between piperazine and benzoxazine ring, with thioether in most potent compounds (compound no. 62 and 63).

A developed QSAR model for piperazines and keto piperazines was found to be robust and accurate. This model can be used for designing the novel renin enzyme inhibitors in future.