The discrete BFKL formalism which accounts for the running of the coupling and incorporates information about the phase of the oscillations at small transverse momentum, arising from the infrared properties of QCD, leads to a QCD pomeron consisting of a set of discrete Regge poles. Here we discuss under what circumstances this discrete pomeron leads to an amplitude which matched the prediction of a DGLAP analysis in the double leading logarithm limit.

The BFKL formalism [1(a) Balitsky II, Lipatov LN. The pomeranchuk singularity in quantum chromodynamics Sov J Nucl Phys 1978; 28: 822-9.; (b) Kuraev EA, Lipatov LN, Fadin VS. Multi-reggeon processes in the Yang-Mills theory Sov Phys JETP 1976; 44: 443-50.; (c) Fadin VS, Kuraev EA, Lipatov LN. On the pomeranchuk singularity in asymptotically free theories Phys Lett B 1975; 60: 50-2.] (in the case of zero momentum transfer) considers an amplitude, A(y,t) , for the forward scattering of a gluon with transverse momentum, , with rapidity gap y, which can be treated in terms of its Mellin transform

where C represents a contour taken to the right of any singularities of the Mellin transform function Aω(t). The purely perturbative BFKL formalism generates a Mellin transform function with a cut along the real axis in the ω-plane. However, it has been shown [2Lipatov LN. The bare pomeron in quantum chromodynamics Sov Phys JETP 1986; 63: 904-12.] that if the strong coupling runs with the transverse momentum, t, a phase-matching boundary condition is automatically imposed at a value, tc, of t where the t -dependence of Aω(t) changes from an oscillatory function to a decaying one. If, moreover, one assumes that the infrared properties of QCD impose a further constraint on the phase of these oscillations at some small value of transverse momentum, then the two constraints can only be simultaneously satisfied for a discrete set, ωn, of ω, and the singularity structure of Aω(t) becomes a set of poles, akin to Regge poles. In such cases the amplitude A(y,t) may be written

The positions of the poles ωn as well as their residues, depend not only on the infrared phases, selected by the infrared properties of QCD, but also on the precise running of the coupling. In this way, the discrete BFKL formalism acts as a communicator between high and low energy scales and the predictions of these amplitudes with large rapidity gaps are affected by physics beyond the Standard Model (BSM) even at thresholds which are considerably higher than the energies at which such amplitudes are considered. In a recent paper [3(a) Kowalski H, Lipatov LN, Ross DA. BFKL evolution as a communicator between small and large energy scales Phys Part Nucl 2013; 44: 547-67.; (b) Kowalski H, Lipatov LN, Ross DA, Watt G. Using HERA data to determine the infrared behaviour of the BFKL amplitude Eur Phys J C 2010; 70: 983-98.; (c) Kowalski H, Lipatov LN, Ross DA, Watt G. The new HERA data and the determination of the infrared behaviour of the BFKL amplitude Nucl Phys A 2011; 854: 45-56.] we have suggested that the quality of the fit of low-x structure functions at HERA is significantly improved by the presence of a supersymmmetry threshold at around 10 TeV.

This immediately poses the question as to how the results from the discrete BFKL formalism can match those of a DGLAP analysis [4(a) Altarelli G, Parisi G. Asymptotic freedom in Parton Language Nucl Phys B 1977; 126: 298-331.; (b) Dokshitzer YL. Calculation of the structure functions for deep inelastic scattering and e+ e- annihilation by perturbation theory in quantum chromodynamics Sov Phys JETP 1977; 46: 641-53.; (c) Gribov VN, Lipatov LN. Deep inelastic e p in perturbation theory Scattering Sov Nucl Phys 1972; 15: 438-50.] in the double leading-logarithm (DLL) limit where both y and t are large, for which the function Aω(t) obeys the DGLAP equation

which is a solution to eq.(3) and the inverse Mellin transform (1) is dominated by a saddle-point at

and is solved in terms of a universal (i.e. process independent) Green function, Gω(t,t') which obeys the equation

This Green function is only uniquely defined once certain boundary conditions are imposed. The first of these is the requirement that for physically sensible results

There must also be a condition on the Green function for small t,(t') which is imposed by the infrared properties of QCD.

The kernel, K0(t,t') may be expressed in terms of its Fourier transform

For simplicity, we start with a simplified model in which the characteristic function is a quadratic function of v, i.e.

and writing the leading order running coupling as

so that it may be expressed in terms of Airy functions Ai(zω(t)) and Bi(zω(t)), where

This Green function oscillates if t<a/(ωβ0) whereas for t>a/ωβ0, Ai decreases, whereas Bi increases. Thus a Green function, which is finite as t(t')→∞ may be written as

However, this is not unique. A more general solution whch satisfies the ultraviolet boundary conditions is

The coefficint cω encodes the infrared properties of QCD and thereby determines the behaviour of the Green function for small t(t').

This has poles whenever Ø(ω)=nπ and these are the Regge poles of the BFKL pomeron. determined by the phase of the oscillatory part of the Green function at small t.

This means that the Green function can be written in terms of a the discrete eigenfunctions, fω(t) of the BFKL operator, αs(t)K0(t,t') with eigenvalues ωn as

The sum generates the discrete poles of the BFKL pomeron but the analytic remainder is crucial for the matching of the t - dependence of the large rapidity-gap amplitudes to DGLAP in the DLL limit.

In the case of the real BFKL characteristic function

where vω(t) is the solution to

and tc is the value of t at which vω(tc)=0. Note that this value of tc depends in the exact nature of the running of the coupling and is therefore sensitive to any thresholds for BSM physics - even for very large values of such thresholds.

For sufficiently large t, vω(t) may be approximated by

and the Airy function, Ai, approximates to

where ФP(t) is the impact factor that describes the coupling of the QCD pomeron to the proton and is the only process-dependent factor.

The integral over ω goes over a contour C taken to the right of all the poles of Gω (See Fig. 1 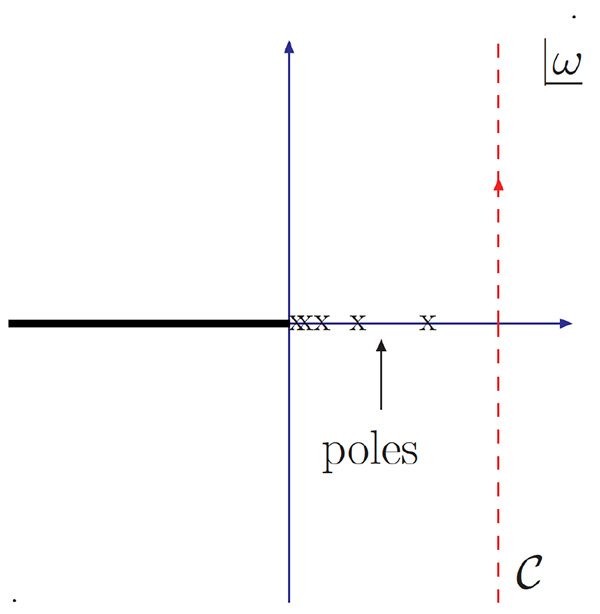 For sufficiently large t, this saddle-point lies to the right of all the poles of Gω (as shown in Fig. 2 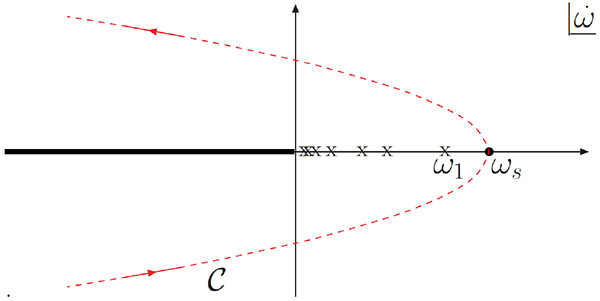 and the contour may be deformed without crossing a singularity, such that the saddle-point approximation is valid and yields

For large t for which the saddle-point is given by (5), we recover the DGLAP expression on the DLL limit.

The discrete poles affect the overall normalization of the unintegrated gluon density, but not its t -dependence.

However, if t is not sufficiently large then this saddle-point lies to the left of one or more of the poles of Gω (as sown in Fig. 3 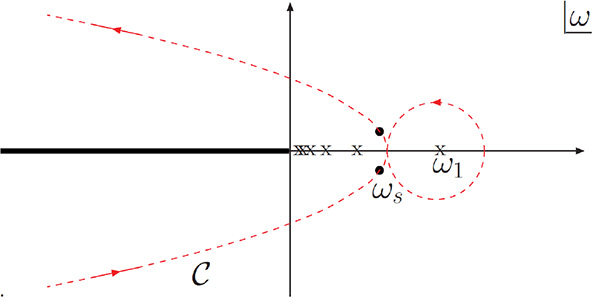 ) and so the saddle-point approximation must be supplemented by the contribution from the contour surrounding these poles, giving rise to an expression for the unintegrated gluon density

The contribution from the poles, which does not, in any way, match the DGLAP expression dominates at sufficiently low x. Therefore the DLL limit of DGLAP is not a good approximation in this region of t.