We describe the implementation of the optical coherence interferometry (OCT) technique in the dynamic measurement of the deformation of polymers. The experimental set-up of the interferometer system and the signal processing used are also described. Theories and methods for measuring polymer film thickness are presented and the results are shown. In this work, the technique does not account for the determination of the refractive index.The study found that the dynamic estimation of the thickness of thin polymer films is possible and very accurate.

In this paper, we investigate the application of this technique for dynamic detection of deformation in polymers used in arterial prostheses with variations of 1 mm and a resolution better than 1 μm and at the same time obtain the change in thickness.

The motivation for this work is to develop a system that will allow precise measurement of dynamic profiles and the thickness of arteries in prostheses. Fast Fourier transform (FFT) in the analysis of the image signal interference is applied to show how this can improve resolution, dynamic range and noise reduction.

The main idea is to use the interference signals produced by reflections from the different sides of the sample and the reference mirror.

The phase of interference signal obtained by the Fourier transform, which determines variations in the thickness and the variation of the position of each face of the sample to be deformed.

The experimental set-up used for the interferometer is the Michelson type shown in Fig. (1 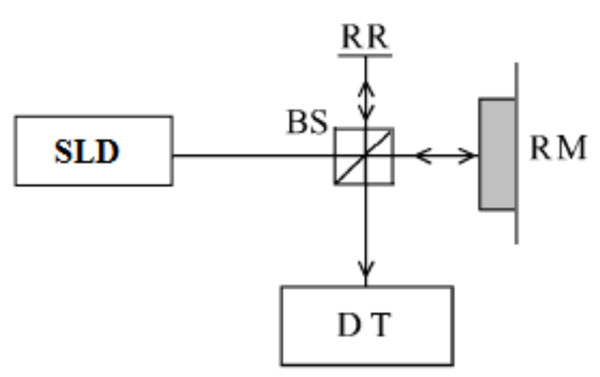 
In one arm of the interferometer the sample to be measured is placed (RM in Fig. 1

) a reference surface is positioned, in this case a mirror (New Focus 5103).

Light reflected in each arm generates an interference signal, which in the phase encodes optical path difference (OPD) between the two arms.

The interference signal is input to the detection system (TD). This system is a spectrometer with a diffraction grid with 1200 lines per millimetre and a CCD sensor with 640 x 480 pixels, which form the image of interference with a sample rate of 1 ms.

The description of the function of light intensity dependent on the OPD is determined by Eq. (1) [12Jackson JD. Classical electrodynamics NCY: Jhon Wiley and Sons. Wiley 1975.]:

We consider now a non-monochromatic source with a Gaussian spectrum:

where k is the wave vector and Δk is the spectral width of the source.

Experimental and simulated results shown in this paper correspond to a superluminescent diode with a central wavelength λo= 800 nm and a spectral width ∆λ= 20 nm.

where β is the visibility or modulation depth and a is the reference reflectivity defined as:

We define FI(x) as the Fourier transform of I(k) with x the conjugate variable. 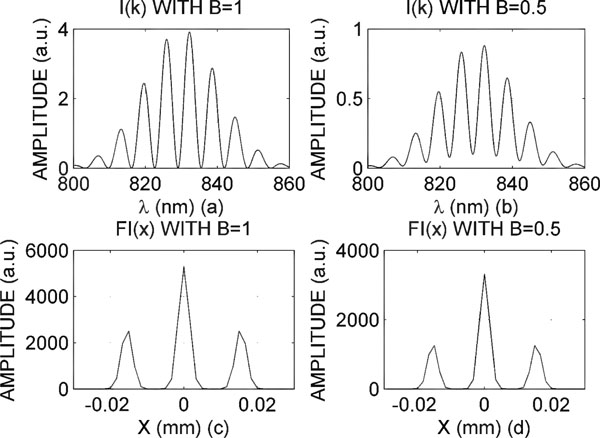 The square module of FI(k) is shown in graphics (c) and (d).

The two lateral Gaussian peaks correspond to the second and third term of Eq. (5) and their centres are the ± value.

To measure absolute distances it is necessary to carry out a calibration of the system. To do this the sample is replaced by a mirror.

A typical calibration curve is represented in Fig. (3 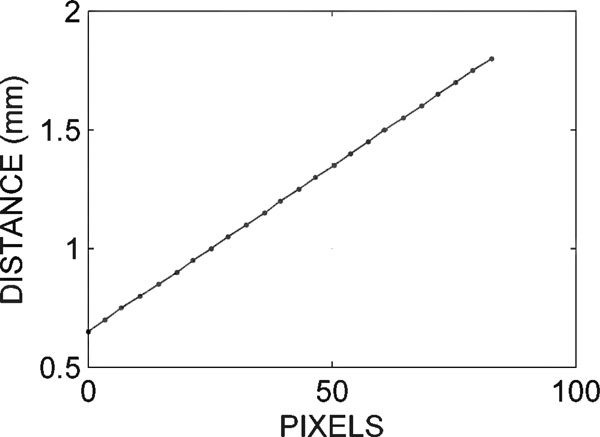 ). The corresponding relation is:

where Äx is the distance in mm and F is the corresponding centre position of the interference peak (in pixel units).

The experimental set-up is similar to that shown in Fig. (1

), except for the sample arm, where the sample is placed in a ring allowing it can apply a normal force to produce the desired deformation.

The light source is a superluminescent diode (Hamamatsu L8414-04 -SLD with power light: 3mw @ 800 nm). In the reference arm is an attenuator system to control the visibility (β).

The deformation is produced by acoustic action through a speaker. This achieves control over the frequency of movement obtained with an Agilent 33220A signal generator.

When the sample is in stationary state, it is not suffering from any deformation, as shown in Fig. (4

When normal force is applied, the sample is deformed, as in Fig. (4

The first supposition is that D1 and D2 are equal. This supposition is not true, because the thickness changes when a force is applied, as in Fig. (6

Where D1 and D2 are no longer equal, D3 being the same distance in Fig. (5

The proposal is to measure the deformation produced on each interface of the sample and the change in thickness in a single measurement. 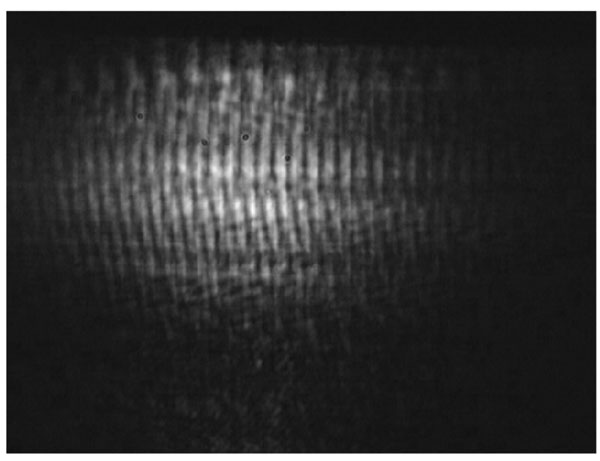 ) shows the image obtained with the OCT technique (optical coherence interferometry), when the sample is in stationary state.

Through analysis of the image, one can obtain the thickness of the sample and distances on the faces of the sample in the mirror reference, as shown in Fig. (8a 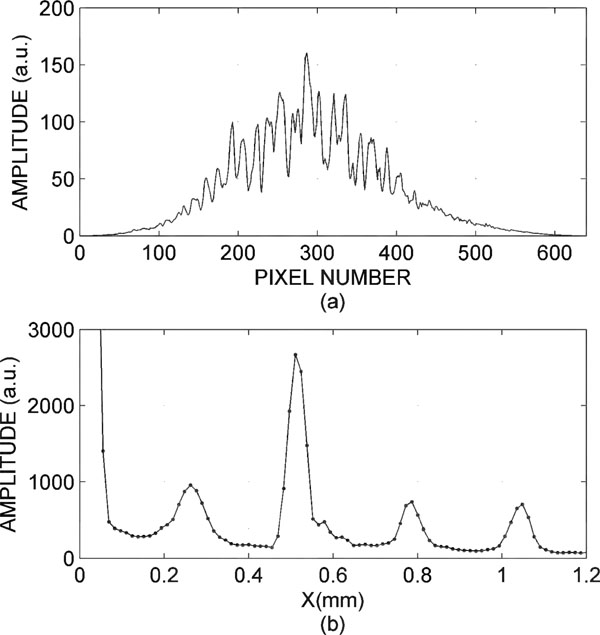 The strain produced by the acoustic wave requires the sample to be moved from its equilibrium position and changes its thickness.

Dynamic measurement is performed by capturing images with a sampling time of 1 ms.

As the thickness varies, the measured interference signals allow us to obtain the distance of deformation D3 and D2, indicating how the sample was deformed. 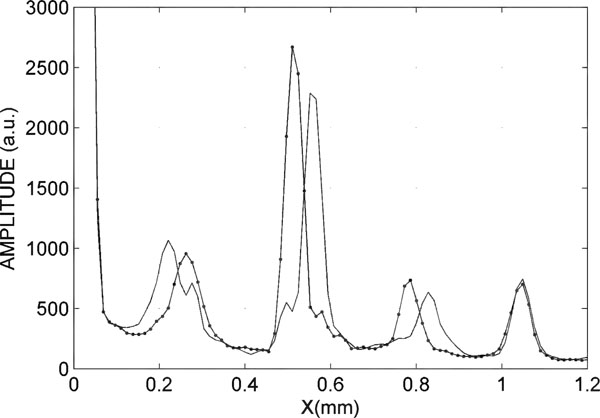 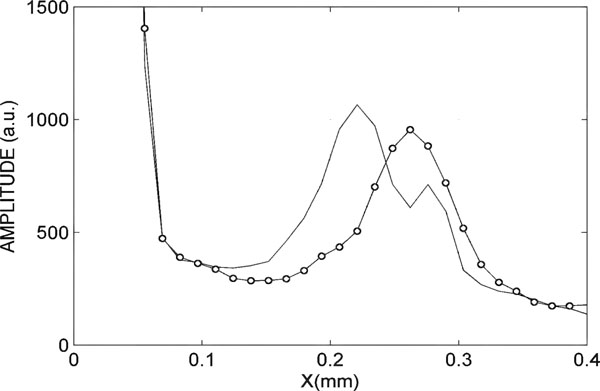 It should be noted that the change of thickness is small compared with the deformation of the sample. Dynamic measurement of thickness is interesting because it allows to determine the elastic behaviour of the material under study.

We have shown that the technique of interferometry broadband allows the study of dynamics in semi-transparent materials, constant forces being applied or varying time. It has been observed that effects of variations in time force the deformation of each side of the sample. The maximum sampling rate is limited by the response of the detector. Semi-transparent material additionally permits small changes in the thickness of the sample.

Real-time measurement of thickness change is of great interest, because it allows us to study the drying of paints and varnishes and solvent evaporation.

We can see that each interface of the sample has a different deformation. This implies that the interface on which the force is applied suffers greater deformation.

The accuracy of this system is 0.50 μm. The dynamic range of the system, in our case 10 µm to 2 mm, can be adjusted according to the application.