A Review of HIV and Surgery in Africa

HIV has a significant impact on surgery in Africa. Its’ influence has spanned a period of about 30 years. In the 1980s' Africa experienced a rise in the national prevalence of HIV spreading across East Africa through Southern Africa, and reaching peak prevalence in the Southern African region. These prevalence levels have affected four key areas of surgical practice; namely patient care, practice of surgery, surgical pathologies, the practitioner and more recently prevention.

The surgical patient is more likely to be HIV positive in Africa, than elsewhere in the world. The patients are also more likely to have co infection with Hepatitis C or B and are unlikely to be aware of his or her HIV status. Surgical patients are also more likely to have impaired liver and renal function at the time of presentation. Therefore, HIV has affected the pattern of surgical pathologies, by influencing disease presentation, diagnosis, management and outcomes. It has also influenced the surgeon by increasing occupational risk and management of that risk. Recently in an ironic change of roles, surgery has impacted HIV prevention through the role of male circumcision as a significant tool in HIV prevention, which has traditionally focused on behavioural interventions.

The story of surgery and HIV continues to unfold on the continent. Ultimately presenting a challenge which requires innovation, dedication and hard work in the already resource limited environments of Africa.

The decline in T4 lymphocytes leads to a failure of cellular immunity which increases the virulence of commensal organisms in the immune incompetent host. This has led to an increase in infective and inflammatory condition in surgical patients, including multifocal abscesses, Fournier’s gangrene, vasculitis, aneurysms, septic arthritis, prostatitis and cystitis [21Bowa K, Malyangu E, Wood C, Angelleti P. A pilot study to compare HIV status and cervical and penile pathology among couples attending the urology unit at UTH. Zambia Med J 2010; 27(2): 84-8., 22Kapatamoyo B, Andrews B, Bowa K. Association of HIV with breast abscess and altered microbial susceptibility. Med J Zambia 2010; 37(2): 58-63.
[PMID: 23170038] ].

The Practice of Surgery

The advent of HIV has influenced surgical practice across the continent. This has been seen in three main areas (Fig. 2 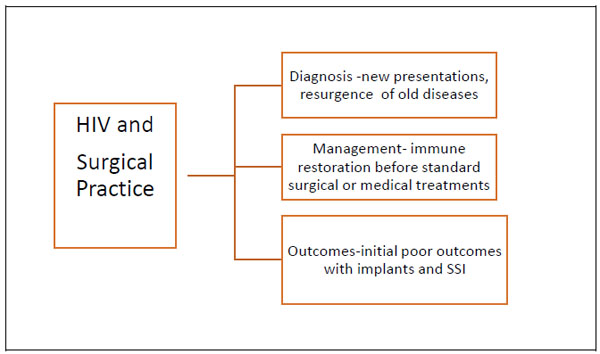 HIV infection has changed surgical practice by altering the presentation of surgical diseases. This has created challenges in the early diagnosis of diseases and has seen uncommon diseases being seen commonly, or common diseases presenting in uncommon ways. This was especially so in the era before HAART treatment was commonly available.

Some very indolent diseases have been re-invigorated to present in very aggressive fashions. Infective and inflammatory conditions have also increased. Of particular note has been an increase in surgical sepsis arising from infective foci in the female genital tract, the pleura, the large joints and the anorectal area. Other surgical complications include pyomyositis, deep seated abscesses and perianal inflammatory pathologies.

In the early days of the epidemic, the surgeon faced many challenges in the insertion of implants especially in fields like orthopaedics. Many patients in stages 3 and 4 of HIV disease had rejected metal implants for internal fixation of fractures. Subsequently the response to prosthesis has been better with the advent of HAART treatment.

Organ transplantation is uncommon in Africa, but the general policy has been to avoid organ transplant in patients who are HIV positive.

In patients with HIV associated malignancies such as Kaposi’s Sarcoma, initial treatment focused on anticancer drugs with very high mortalities resulting. However with the advent of HAART the role of oncological drugs in the treatment of KS has been reversed. The treatment of HIV related sepsis by intensive care with multiple antibiotics has been overtaken by earlier treatment with HAART and restoration of better immune function [30Elem B, Ranjan P. Impact of immunodeficiency virus (HIV) on Fournier’s gangrene: observations in Zambia. Ann R Coll Surg Engl 1995; 77(4): 283-6.
[PMID: 7574321] -33Elem B, Patil PS. Renal tuberculosis in Zambia: observation on 900 consecutive autopsies. Med J Zambia 1984; 18(1): 5-7.
[PMID: 6534035] ].

For post operative patients, initial experience was of an increase in post-operative morbidity and high prevalence of surgical site infection (SSI). However with an overall improvement in medical management SSI infection prevalence among HIV patients has been shown to be similar to seronegative patients.

The management of HIV patient in emergency settings particularly in trauma has posed a special challenge. Many patients are undiagnosed and have to receive surgical care in an emergency setting without the prior advantage of HAART treatment. Studies have shown, that now, with stabilisation of the HIV pandemic the emergency care outcome has not differed significantly between the two groups [34Saltzman DJ, Williams RA, Gelfand DV, Wilson SE. The surgeon and AIDS: twenty years later. Arch Surg 2005; 140(10): 961-7.
[http://dx.doi.org/10.1001/archsurg.140.10.961] [PMID: 16230546] -36Crabtree KL, Wojcicki JM, Minhas V, et al. Risk factors for early childhood infection of human herpesvirus-8 in Zambian children: the role of early childhood feeding practices. Cancer Epidemiol Biomarkers Prev 2014; 23(2): 300-8.
[http://dx.doi.org/10.1158/1055-9965.EPI-13-0730] [PMID: 24296855] ].

With the increased burden of surgical disease which has come with HIV infection, there has been an increased pressure on surgical services. This has placed stress on an already overstretched surgical work force. There has been an attempt to innovatively address this challenge by a number of strategies including task shifting, task sharing and increased training of surgical specialists [37Lavy C, Tindall A, Steinlechner C, Mkandawire N, Chimangeni S. Surgery in Malawi - a national survey of activity in rural and urban hospitals. Ann R Coll Surg Engl 2007; 89(7): 722-4.
[http://dx.doi.org/10.1308/003588407X209329] [PMID: 17959015] -39Chalya PL, Ssentongo R, Kakande I. HIV seroprevalence and its effect on outcome of moderate to severe burn injuries: A Ugandan experience. J Trauma Manag Outcomes 2011; 5(1): 8.
[http://dx.doi.org/10.1186/1752-2897-5-8] [PMID: 21658212] ].

Many Surgeons and health workers practicing surgery in Africa have been affected by HIV. This is because there is a high prevalence of HIV in the population they work with and consequently there is a high HIV prevalence among patients seeking surgical services. In studies done in Africa the prevalence of HIV in surgical patients was found to range between 15-40%. The WHO places the occupational risk of HIV at 0.3%, this is significantly higher in Africa [40Anon. Guidelines on Post Exposure Prophylaxis for HIV Recommendations for a Public Health Approach. Geneva: World Health Organization 2014.].

According to a report from Zambia, comparing the risk of HIV acquisition among surgeons in developed countries to those in developing countries, surgeons practicing in Africa have a 15 fold increased occupation risk of HIV. The study showed that the risk in Europe was 0.1% over 5 years while that in Zambia 1.5% [41Consten EC, van Lanschot JJ, Henny PC, Tinnemans JG, van der Meer JT. A prospective study on the risk of exposure to HIV during surgery in Zambia. AIDS 1995; 9(6): 585-8.
[http://dx.doi.org/10.1097/00002030-199506000-00009] [PMID: 7662197] , 42Gumodoka B, Favot I, Berege ZA, Dolmans WM. Occupational exposure to the risk of HIV infection among health care workers in Mwanza Region, United Republic of Tanzania. WHO Bull OMS 1997; 75(2): 133-40.]. Other studies in Africa attest to this increased risk both because of the high HIV prevalence, poor adherence to universal precautions due to resource limitation and relatively lower levels of safer surgical practices such as endoscopic /laparoscopy surgery.

It is ironic that surgical practice in Africa which has been so heavily affected by HIV, should itself provide one of the potential prevention strategies. Therefore in discussing the effect of HIV on surgery in Africa, it would not be complete without a discussion on the effect of surgery on the HIV pandemic in Africa.

The surgical pathologies seen are of infections, inflammations and malignancies in various body systems. In particular there has been a notable increase in deep seated abscesses in unusual sites such as the chest cavity, the brain, the pelvis and the perineum. Surgical forms of extra pulmonary tuberculosis have emerged such as TB of the spine, kidney, abdomen and testis.

Other opportunistic infections such as cytomegalovirus(CMV) have been associated with retinitis and cystitis. Mucosal cancers have increased remarkably under the influence of human papilloma virus. These include cancer of the penis, anus, larynx and cervix. Other viruses such as Herpes 8 virus have been associated with Kaposi’s sarcoma, a new variant of the old indolent KS disease.

These pathologies have affected specialised surgical treatments such as insertion of prosthesis, implants and organ transplantation. In spite of earlier fears that HIV would affect surgical outcomes, it has become clear that with HAART treatment, there is no significant difference.

The high HIV prevalence of surgical patients has increased the occupational risk of practitioners up to 15 fold. In an environment of limited human resources this has added to the pressure placed on surgical services in Africa. Some innovations using minimally invasive techniques in managing surgical patients have emerged as a result of this.

The increased levels of HAART treatment have helped to ameliorate some of the surgical diseases of HIV infection. In this environment has come an additional surgical intervention in the prevention of HIV transmission, which builds on existing interventions. Male circumcision as an intervention has the potential to reduce HIV incidence in Africa by 37%. Though challenges remain in its implementation, it presents an area of promise in HIV prevention.