In this paper, geometric nonlinear analysis of pitched roof frames was carried out by the stiffness matrix method using stability functions.

This study contributes to a better knowledge of the stability of pitched roof frames, not braced, and therefore of the efficiency in their dimensioning.

At first, the argument of the stability functions was set as 0.01. The stiffness matrix of the frame has been assembled, as well as the nodal load vector of the frame. The boundary conditions (support restraint and wind bracing restraint) were introduced for the reduction of this matrix and the nodal load vector. At this stage, the determinant of the reduced stiffness matrix and the reduced nodal displacement vector are calculated. The argument of the stability functions is incremented by 0.01 and the operations are repeated until the determinant of the reduced stiffness matrix changes sign. The argument of the iteration preceding the sign change of the determinant and corresponding to its positive value is taken and refined by a process described in the paper. The buckling loads of the frame members are determined at this stage.

The analysis focused on four frames; the obtained results show that the increase in the inclination of the crossbar makes it possible to take full advantage of the “arch effect”. Arch effect is due to the presence of crossbars which have a linear arch shape. Furthermore, the angle as well as the length ratio, between the crossbar and post, influence critical load value.


* Address Correspondence to this author at the Laboratory of Applied Energetics and Mechanics (LEMA), University of Abomey-Calavi, Abomey-Calavi, Benin; Tel: +22997114820; E-mail: marianos24@yahoo.fr

The geometric nonlinear analysis of pitched roof frames will be made by the stiffness matrix method using stability functions. Geometric nonlinear analysis of frames is a problem of elastic instability. Although the structure is in the elastic range, the effects of large displacements (large deformations) modify the geometry of the structure; which renders inapplicable the theory of linear elasticity. Examples of these phenomena of instability are buckling, local buckling and lateral buckling [1J. Morel, Calcul des structures métalliques selon l’eurocode 3., Eyrolles: Paris, .].

Stability analysis in solid mechanics began with Euler's solution of buckling of an elastic column (Euler, 1744). Most basic linear elastic problems of structural stability were solved by the end of the 19th century, although further solutions have been appearing as new structural types were being introduced. The twentieth century has witnessed a great expansion of the stability theory into nonlinear behavior, caused either by large deflections or by nonlinearity of the constitutive law of the material [2Z.P. Bažant, "Structural stability", Int. J. Solids Struct., vol. 37, pp. 55-67.
[http://dx.doi.org/10.1016/S0020-7683(99)00078-5] ].


Arches carry most of their loads by developing compressive stresses within the arch itself and therefore in the past were frequently constructed using materials of high compressive strength and low tensile strength such as masonry. In addition to bridges, arches are used to support roofs. They may be constructed in a variety of geometries; they may be semicircular, parabolic or even linear where the members comprising the arch are straight. Today arches are usually made of steel or of reinforced or prestressed concrete and can support both tensile as well as compressive loads. They are used to support bridge decks and roofs and vary in span from a few metres in a roof support system to several hundred metres in bridges.

Previous research on the stability of pitched roof frames used analytical approaches. As can be seen from the literature, very few analytical studies have been conducted on the stability of this type of frame. This is in part due to the mathematical difficulties that may be involved in the solution of the associated boundary-value problem, imagine that we are faced with the problem of solving a large set of simultaneous differential equations along with a large number of continuity conditions and boundary conditions. It is true that the mathematical difficulties encountered in the analytical study of pitched roof frames can be greatly eased through the use of numerical approaches, such as the stiffness matrix method, along with the support of modern high-performance computers.

The aim of the study is to find the critical loads of the frame members. The determinant of the reduced stiffness matrix of the frame, as well as the argument of the stability functions, are used to determine these critical loads. A computer program is used to carry out the various operations.

This paper is devoted to calculating the critical load of pitched roof frames made up of straight members. The posts of the frame, which are vertical, rise continuously from the foundation to the top of the structure. The posts of the first storey can be of different lengths. The crossbars make an angle α with the horizontal. The bars are connected to the nodes, which are considered non-deformable, by rigid assemblies. The feet of the posts are fixed in a rigid manner to the foundation.

The external forces considered in the present study are such that, before the loss of stability, the members undergo only axial compression (or traction). For example, Fig. (1

) shows such a system of forces. Here, the loads are only concentrated loads applied to the nodes, acting in the axes of the posts and crossbars.

To make the analysis of frames easier and systematic, it is useful to introduce some non-dimensional parameters Table 1 concerning the geometry, the loading and the support conditions (stiffness of the posts feet). These parameters are as follows:

They reflect on the one hand, the ratios that exist between the inertias (RI), the lengths (RL), the axial forces (RN) of the posts and crossbars and, on the other hand, the relative stiffness of the posts feet, calculated in relation to the characteristics of the posts themselves (S) [8N. Silvestre, and D. Camotim, "Etude sur la stabilité des portiques à traverse brisée", Construction métallique, , vol. 4, pp. 5-20.].

This study is based on the following assumptions:

In addition, the elastic length variations due to axial forces are neglected. All the nodes of a crossbar thus have the same transverse displacement.

Nonlinear analysis of structures can be formulated using Fig. (2


The stiffness matrix ([ki] in local coordinate system) and that of rotation transformation, [Ti], of a member << i >> are modified during the increase of the axial load. However, in this study, [Ti] is assumed unaffected.

{fi} is the nodal load vector of the member; Pi, Vi and Mi respectively represent axial force, shear force and bending moment at node i.

{di} is the vector of nodal deformations of the member; ui, vi and θi respectively represent axial displacement, lateral displacement and rotation at node i.

E is YOUNG’s modulus of elasticity of the member material, A, the cross-sectional area of a member, I, the moment of inertia of a section, L, the length of a member; φ(υ) and η(υ) are the stability functions.

The stability functions [9I.A. Karnovsky, and O. Lebed, Advanced methods of structural analysis, vol. 68, Springer, London,Dordrecht Heidelberg.: New York, no. 8, p. 593.
[http://dx.doi.org/10.1007/978-1-4419-1047-9] ] of the members (equation 3) cannot be calculated because the axial forces acting on them are unknown. An iterative method is used to overcome this difficulty. One starts by calculating these functions using as load argument υ = 0.01.

The following steps should be implemented for the linear analysis of the stability of a frame:

5. FLOWCHART OF THE COMPUTER PROGRAM

The algorithm required for the linear analysis of stability of pitched roof frames (by stiffness matrix method) is represented in the form of a flowchart Fig. (3 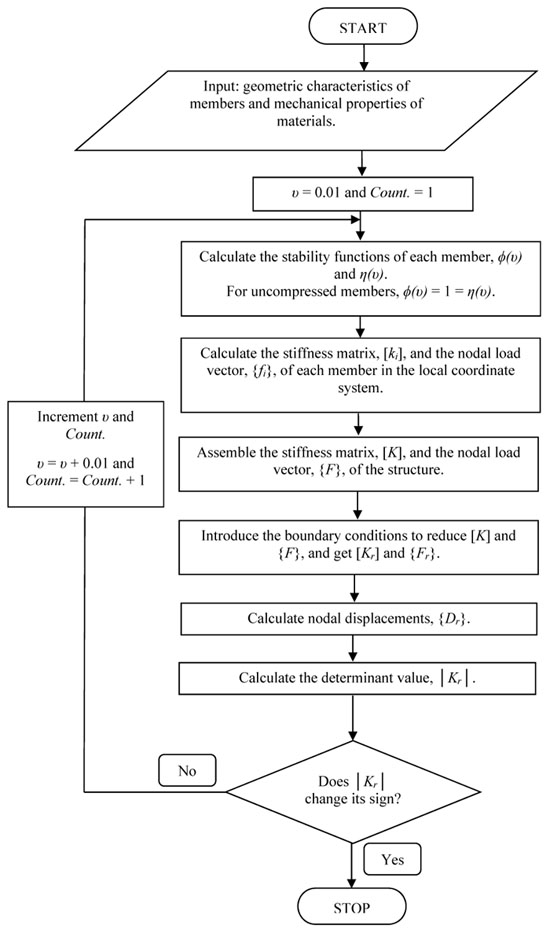 ) showing the important tasks to be performed.


This algorithm is based on the stiffness matrix method. The data input of the program is the geometric characteristics of members and mechanical properties of materials. The displacements, the determinant and the axial forces of the members will be determined for each argument υ, until │Kr│ changed sign.

Let's start with a digital application for a basic construction. Let us study the stability of the simple symmetrical frame and symmetrically loaded shown in Fig. (1a

The following Table 2 presents the computation of the determinant │Kr│ and the nodal displacements {Dr} of the frame, for increasing values ​​of υ:

Table 2
Determinant and nodal displacements of the frame 1.

The reduced stiffness matrix of the frame, [Kr], is a function of the load because of the geometrical non-linearity; this is used as a stability criterion:

The following Table 3 presents the calculation of some characteristics of the frame:

Table 3
Critical parameters of the frame 1.

The following Table 4 presents the computation of the determinant │Kr│ and the nodal displacements {Dr} of the frame, for increasing values ​​of υ:

Table 4
Determinant and nodal displacements of the frame 2.

The following Table 5 presents the calculation of some characteristics of the frame:

Table 5
Critical parameters of the frame 2.

The following Table 6 presents the computation of the determinant │Kr│ and the nodal displacements {Dr} of the frame, for increasing values ​​of υ:

Table 6
Determinant and nodal displacements of the frame 3.

The following Table 7 presents the calculation of some characteristics of the frame:

Table 7
Critical parameters of the frame 3.

The following Table 8 presents the computation of the determinant │Kr│ and the nodal displacements {Dr} of the frame, for increasing values ​​of υ:

Table 8
Determinant and nodal displacements of the frame 4.

The following Table 9 presents the calculation of some characteristics of the frame:

Table 9
Critical parameters of the frame 4.

7. ANALYSIS OF THE RESULTS 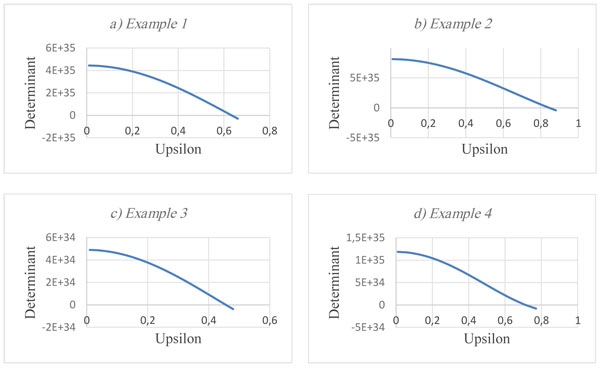 ) shows the variation of the determinant of reduced stiffness matrix of the structure according to the upsilon argument for the four previously studied structures.

Analysis of the table reveals that the cross member is more compressed than the post (RN > 1) when RL > 2; when RL is fixed, increasing the inclination of the crossbar (α) increases the value of the critical load Ncr (lower sensitivity to elastic instability phenomena); on the other hand, when α is fixed, the increase in the length ratio, RL, reduces the value of the critical load Ncr (high sensitivity to the phenomena of elastic instability).

An important event observed during the analysis was that starting from the first iteration, i.e. “υ = 0.01”, the determinant │Kr│ was positive until υcr Fig. (4

); which reflects the stability of the structure for loads N < Ncr. Furthermore, the determinant decreased and the displacements converged to infinity (the structure went into an elastically unstable condition) until υcr.

The analysis focused on four frames; the obtained results show that the increase in the inclination of the crossbar (α) makes it possible to take full advantage of the “arch effect”, and that the angle α as well as the length ratio, RL, influence the value of the critical load, Ncr.

"We greatly appreciate the efficient, professional and rapid processing of our paper by your team. The editors are so kind and professional to send us the reviewers' feedback in time. Those comments were all valuable and very helpful for us in revising and improving our paper."