Fig. (6) Brefeldin which induces ER stress increases the Con A binding of Tip60 A) After treatment of brefeldin to HEK293 cell in the indicated time and concentration, Tip60 glycosylation, the glycosylation of Tip60 which was detected by Con A bead (upper lane). For the control, each sample was immunoblotted with Tip60Ab (bottom lane). Result shown is one of five repeated experiments. B) The relative quantification of Tip60 glycosylation increase with brefeldin treatment is shown by image analysis with the Fuji Image Quant software. The relative arbitrary unit to the maximum value on the specific time in each brefeldin treatment concentration (indicated above) was shown. 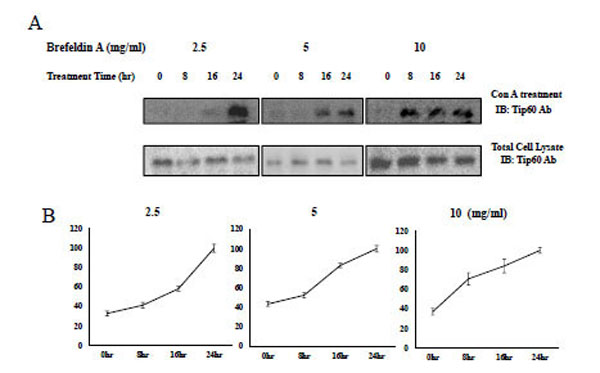