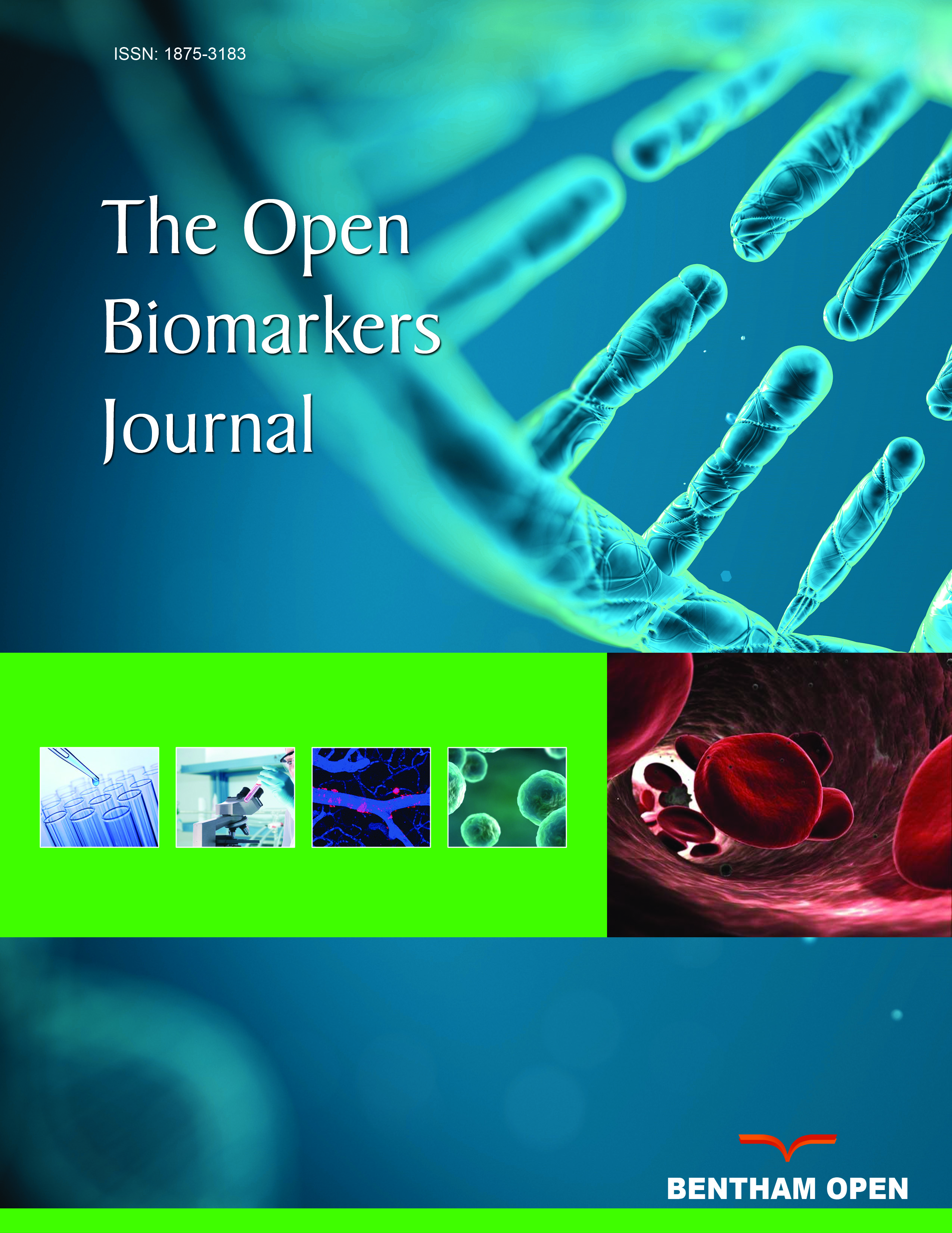 Echinochrome (Ech) is the active ingredient in the Histochrome drug, which possesses strong antioxidant, hypolipidemic and hypoglycemic activity.

The present work aimed to characterize the malformations induced by moderate and high dose of Ech during pregnancy.

The high dose of Ech caused a significant decrease in the number of embryos, uteri weight, body weight gain, placenta weight, and embryo weight and length. Also, the high dose led to a significant increase in serum AST, ALT, ALP, urea and uric acid of mothers.

Our findings revealed the first teratogenic effects of high dose Ech. The teratogenic mechanism of Ech works through induction of the hypoglycemic condition in pregnant rats.

During November 2017, sea urchins (Paracentrotus lividus) were collected from the Mediterranean coast of Alexandria, Egypt. After collection, the samples were carefully cleaned with seawater to remove sand and overgrowing organisms and then transferred to the laboratory packed in the icebox.

Ech pigment was extracted according to the method adopted by Amarowicz et al. [13Amarowicz R, Synowiecki J, Shahidi F. Sephadex LH-20 separation of pigments from shells of red sea urchin (Strongylocentrotus franciscanus). Food Chem 1994; 51: 227-9.
[http://dx.doi.org/10.1016/0308-8146(94)90262-3] ] with some modifications. The shells and spines were cleaned with a stream of cold water after the removal of internal organs. Then, the samples were air-dried at 4°C for 2 days in the dark. Dried samples were hand crushed and then coarsely powdered with a grinder. Thereafter, five grams of dried sample was gradually hydrolyzed with 10 mL of 6 M HCl. After hydrolysis, Ech pigment was extracted 3 times with 10 ml of diethyl ether. The collected ether layer was washed by adding NaCl (5%) until the acid almost removed. Finally, the ether solution containing pigments dried over anhydrous sodium sulfate and the solvent was evaporated under reduced pressure. Ech pigment was stored at -30°C in the dark until use [14KUWAHARA, R. et al. Antioxidant property of polyhydroxylated naphthoquinone pigments from shells of purple sea urchin Anthocidaris crassispina. Technology, v. 42, n. 7, p. 1296-1300, 2009 ].

Experimental protocols and procedures used in this study were approved by Cairo University, Faculty of Science, Institutional Animal Care and Use Committee (IACUC) (Egypt) (CUIF718). All the experimental procedures were carried out under international guidelines for the care and use of laboratory animals.

After one week of acclimatization, mating between males and females (1: 2) was done. The presence of sperm in the vaginal lavage will be considered day 0 of gestation.

At day 20, the animals were euthanized and the blood samples were collected for biochemical analysis. For embryo: morphological malformation was observed.

Values were expressed as means ±SE. The comparisons within the groups were made using one-way Analysis of Variance (ANOVA) with Duncan post hoc test used to compare the group means. P<0.05 was considered statistically significant. SPSS, for Windows (version 15.0) was used for the statistical analysis.

According to the data recorded in Table 3, non-significant change was noticed in kidney function makers after the administration of a low dose of Ech. While significant increases (p<0.05) were observed in the levels of urea, creatinine and uric acid at a high dose of Ech. 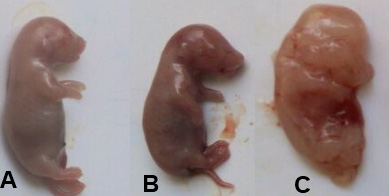 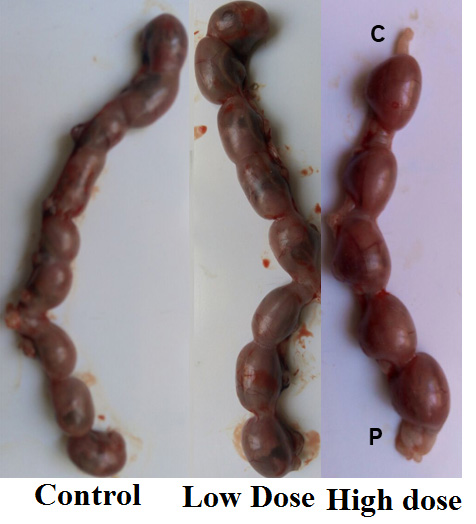 The high dose of Ech caused an increase in urea concentration, which is related to the activation of the urea cycle to consume increase in amino acids produced from protein catabolism [26Mohamed A. Physiological effects of three Different Rodent Beddings in Egypt 2018.]. Our results showed that the high dose of Ech increases the level of creatinine. This is due to the activation of creatinine kinase enzyme during hypoglycemia which is primarily because of damage in muscle [27JEVRIć-CAUSEVIć, A.; MALENICA , M.; DUJIć , T. Creatine kinase activity in patients with diabetes mellitus type I and type II. Bosn J Basic Med Sci, v. 6, n. 3, p. 5-9, 2006 ].

Our findings revealed the first teratogenic effects of a high dose of Ech. The teratogenic mechanism of Ech works through the induction of the hypoglycemic condition in pregnant rats.

The experimental protocols and procedures used in this study were approved by Cairo University, Faculty of Science, Institutional Animal Care and Use Committee (IACUC) Egypt (CUIF718).

No humans were used in this research.The reported experiments were in accordance with the standards set forth in the 8th Edition of Guide for the Care and Use of Laboratory Animals (http://grants.nih.gov/grants/olaw /Guide-for-thecare-and-use-of-laboratory-animals.pdf) published by the National Academy of Sciences, The National Academics Press, Washington DC, United States of America.