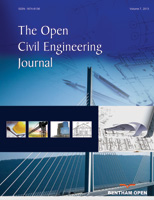 Finally the computed values of midspan deflection for tested beams are achieved.

The problem of reinforcement corrosion in concrete structures is quite outstanding in the coastal and island areas. There are numerous examples of premature destruction of buildings, bridges and ports due to corrosion. Every year, the cost for rehabilitating aging structures is surprisingly high all over the world, which leaded to huge economic losses [1K.F. Dunker, and B.G. Rabbat, "Why America’s bridges are crumbling", Sci. Am., vol. 3, pp. 66-72, 1993.
[http://dx.doi.org/10.1038/scientificamerican0393-66] ].

In recent decades, fiber reinforced polymer (FRP), a kind of promising new structural material, has been widely used in civil engineering due to its light weight, high strength, corrosion resistance and other advantages [2J.E. Hall, and J.T. Mottram, "Combined FRP reinforcement and permanent formwork for concrete members", J. Compos. Constr., vol. 2, no. 2, pp. 78-86, 1998.
[http://dx.doi.org/10.1061/(ASCE)1090-0268(1998)2:2(78)] -9P. Feng, X.Z. Lu, and L.P. Ye, Application of Fiber Reinforced Polymer in Construction: Experiment, Theory and Methodology, China Architecture Industry Press: Beijing, 2011.]. This study represents one part of a research project concerning the environmental durability of a new type of hybrid beam. It comprises RC beam combined with a U-shaped GFRP pultruded profile which providing tensile reinforcement, permanent formwork and corrosion resistance for the system. Six beams are tested under three points loading. Five of them are hybrid beams and the rest one is a control RC beam. The moment-curvature curves of all tested beams are obtained based on the experimental study. The change characteristics of flexural stiffness for tested beams are analyzed and the short-term flexural stiffness formula is derived in this paper.

For the convenience of adjustment to the cross section size of beam, an L-shaped GFRP pultruded profile was first fabricated, then two L-shaped profiles were connected with GFRP bar to form a U-shaped profile. To ensure an efficient section, composite action between the GFRP permanent formwork and the concrete is essential. So the mechanical bond is provided with some T-up-stands on the GFRP internal surface which was covered with a curing epoxy mortar, as shown in Fig. (1 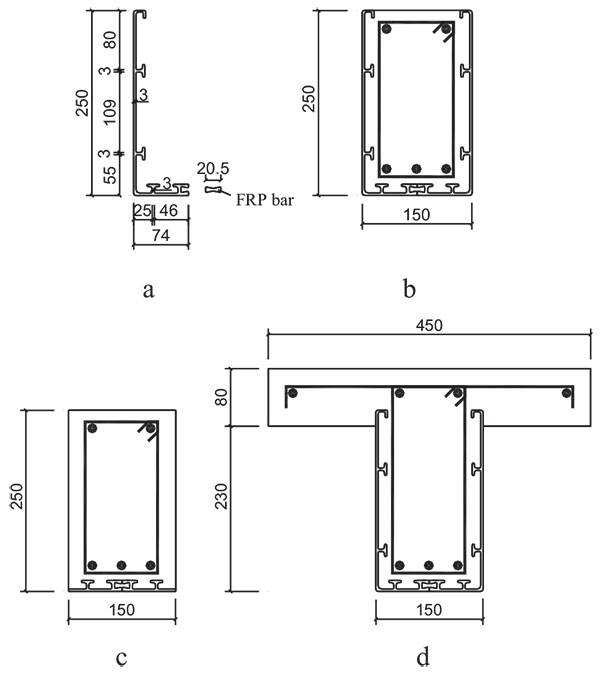 For the limitation of space, the moment-curvature curve of the tested beam TB is only shown in Fig. (2 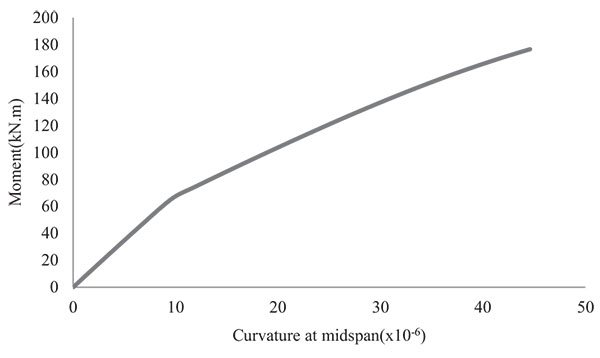 
3.2. The Change Characteristics of Flexural Stiffness

From the moment-curvature curve shown in Fig. (2

), it can be seen that both moment-curvature relation and flexural stiffness of hybrid beam change along with the increase of bending moment, and it can be divided into three stages:

(1) Stage I: It was stage I from the initial loading to the cracking of concrete in which the beam behaves elastically while the relationship between moment and curvature was nearly linearity.

(2) Stage II: It was stage II from the cracking of concrete to the yield of tensile steel. The moment-curvature curve appeared a turning. The curvature increased fast while the flexural stiffness decreased with the increase of bending moment.

(3) Stage III: It was stage III after the yield of tensile steel. The moment-curvature curve appeared a second turning. Flexural stiffness continued to decrease while the curvature increased further.

3.3. The Calculation of Flexural Stiffness

Based on tests and for the sake of simplicity the following basic assumptions are made in the derivation of short-term flexural stiffness for hybrid beams:

Based on the above assumptions, the derivation of short-term flexural stiffness for hybrid beam is shown as follows [10L.P. Ye, Concrete Structures, Tsinghua University Press: Beijing, 2006.]:

The lower flange area of GFRP profile is converted to the steel area according to the strength equivalent principle.


By equilibrium of forces at the cracked section we have:

From the above equations we have:

By the relationship between mean strain and cracked section strain, namely

, combined with Eq.(2) and (5), the mean strain in tensile steel and extreme compressive fiber of concrete can be obtained by

is a compound coefficient of mean strain in the extreme compressive fiber of concrete.

For T-section with compressive flange shown in Fig. (4

), by equilibrium of forces we have:

is the strengthen coefficient for compressive flange.

, the expression for flexural stiffness Bs under bending moment Mk is:

σsk— tensile stress in steel under the short-term bending moment, which is calculated by Eq.(5).

3.4. The Calculation of Midspan Deflections

All the hybrid beams were tested under three points loading, so the midspan deflections of which under short-term moment can be taken as follows:

The theoretical values of midspan deflections for hybrid beam can be calculated by using the above formula. The comparison between tested values and computed values is shown ​in Table 2. During serviceability state, the short-term moment Mk of hybrid beams was generally in stage II of moment-curvature curve, so Mk in Table 2 should be taken as the moment My when the steel yielded.

It can be seen from the Table 2 that the tested​ values agree quite well with the computed values.

Table 2
Comparison between the measured value and computed value of midspan deflections for tested beams.