Fig. (3) In vitro nisin release assay from liposome-encapsulated nisin. Liposome-encapsulated nisin was incubated in 10 mM sodium citrate (pH 7.0) containing 0.01% Triton X-100 at 37°C. At the appropriate incubation periods, amounts of nisin released into the supernatant at 10,000×g for 10 min were quantitated. The levels of nisin are expressed as the cumulative percentage release. The maximum value was defined as 100% release. Symbols indicate the lipid formulations of liposomes. The assays were performed in triplicates at each time point, and the bars represent the standard deviation of sample means. * P < 0.05 compared with the group of DPPC-encapsulated nisin. 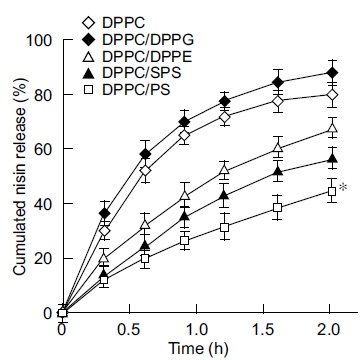