Different light curing units are used for polymerization of composite resins. The aim of this study was to evaluate the degree of conversion (DC) and temperature rise in hybrid and low shrinkage composite resins cured by LED and Argon Laser curing lights.

DC was measured using FTIR spectroscopy. For measuring temperature rise, composite resin samples were placed in Teflon molds and cured from the top. The thermocouple under samples recorded the temperature rise. After initial radiation and specimens reaching the ambient temperature, reirradiation was done and temperature was recorded again. Both temperature rise and DC data submitted to one-way ANOVA and Tukey-HSD tests (5% significance).

Degree of conversion (DC) is one of the most important factors in clinical performance of dental composite resins. Optimal physical, mechanical and biological properties of composite resins are related to a higher DC that per se is due to the total emitted light energy from the LCUs with proper wavelength in accordance with the photoinitiator of the composite resin [16]. Although higher light intensity causes higher DC resulting in better physical properties of the composite resin, it also generates more shrinkage stress that can lead to increased microleakage. Therefore, attempts must be made to minimize temperature rise and achieve an acceptable DC during composite resin polymerization in order to avoid any thermal damage to the pulp, achieve optimal properties of the restorative material and decrease shrinkage stress [17Luis Felipe J. Schneider. Shrinkage stresses generated during resin-composite applications: A review. J Dental Biomech Vol. 2010, Article ID 131630, 14 pages.].

Therefore, the aim of this study was to investigate the temperature rise and DC of two types of composite resins (methacrylate based and silorane based) cured with different LCUs.

In this experimental study, two LCUs were evaluated: Ultralume2 (Ultradent, USA) and Bluephase 16i (Ivoclar Vivadent, Lichtenstein). Argon laser (Melles, USA) was another curing light used in this study. Filtek Z250 (3M-ESPE) and Filtek P90 (3M-ESPE) shade A2 composite resins were selected. The characteristics of LCUs and composite resins are listed in Tables 1 and 2.

Five samples were prepared for each combination of composite resin and LCU in Teflon molds with 4 mm diameter and 2 mm thickness. The top surface of samples was covered with celluloid strip with 0.3 mm thickness. Then, the light guide of the curing units was placed parallel to the sample surface in contact with the strip. Curing was done according to the manufacturer's instruction which was 40s for Ultralume2 and Argon laser and 10s for Bluephase16i. Temperature rise during the photopolymerization of the composite resin was measured and shown in monitor screen using a K-type thermocouple fixed under the specimens and connected to the thermometer (Fig. 1


A thermocouple, a data logger and a computer were used for measuring and recording data. The thermocouple measured the sample’s temperature during the test and data logger processed data for saving in the computer.

For measurement of DC, a small amount of composite resin was placed between two polyethylene films that had no interference with the wavelengths absorbed by resins and was then pressed to form a very thin film and the absorbance peaks of uncured samples were quantified with FTIR (Equinox 55,Bruker, Germany) (Fig. 2 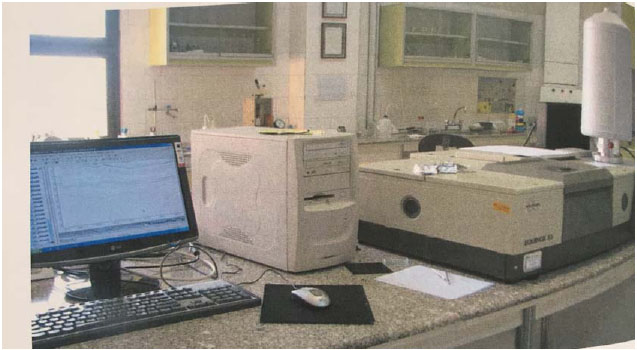 ). Afterwards, the peaks for cured samples were obtained. For each composite resin and LCU, 3 samples were prepared.

The results were analyzed and compared using two-way ANOVA. Because of significant interaction between composite resins and curing unites, one-way ANOVA followed by the Tukey-HSD test at the significant level of 0.05 were done.

T1 was significantly different in various composite resins and LCUs. It was higher in P90 than in Z250 (p-value=0.001) and lower in laser than other curing lights. The two diode LCUs had no significant difference with each other in this regard (Graph 1).

T2 was not significantly different in various composite resins; but, it was significantly lower in laser LCU compared to other curing lights. The two diode LCUs had no significant difference with each other in this respect (Graph 2).


T3 was significantly different in various composite resins and was higher in P90 than in Z250, but no significant difference was found between different LCUs in this regard.

Tmax was not significantly different in various composite resins or different LCUs.

Mean values and standard deviations of T1, T2, T3 and Tmax are presented in Table 3.

DC was the same in different resin-based composites and LCUs. It means that neither the type of composite resin nor the LCU had any significant effect on DC. Mean values and standard deviations of samples’ DC are demonstrated in Table 4.

Our findings are similar to those reported by Rostelli in 2008. In his study, argon laser and LED curing lights had no statistically significant difference in terms of temperature rise and DC in Z250 composite resin. This similarity was claimed to be due to the equal energy density of both light sources [19Rastelli DP. Jacomassi. Degree of conversion and temperature increaseof a composite resin light cured with an Argon laser and Blue LED. Laser Phys 2008; 18(12): 1570-5.
[http://dx.doi.org/10.1134/S1054660X0812030X] ].

In the mentioned study, the DC was measured shortly after the curing and was found to be the same in both composite resins. If the DC had been measured at the time intervals, different results might have been obtained.

Rostelli measured the DC at different time intervals and observed no significant difference between LED and argon laser at different depths. Hence, for both curing lights, the polymerization was sufficient up to 2mm thickness and the DC of Z250 composite resin samples was adequate. However, polymerization was insufficient in areas deeper than 2mm [19Rastelli DP. Jacomassi. Degree of conversion and temperature increaseof a composite resin light cured with an Argon laser and Blue LED. Laser Phys 2008; 18(12): 1570-5.
[http://dx.doi.org/10.1134/S1054660X0812030X] ].

The overall (T1) and polymerization temperature rise in silorane-based composite resins (P90) can be due to the ring-opening cationic reaction of oxirane and siloxane molecules. This reaction takes place in oxirane molecule [21Boaro LC, Gonçalves F, Guimarães TC, Ferracane JL, Versluis A, Braga RR. Polymerization stress, shrinkage and elastic modulus of current low-shrinkage restorative composites. Dent Mater 2010; 26(12): 1144-50.
[http://dx.doi.org/10.1016/j.dental.2010.08.003] [PMID: 20832850] ]. Optical pyrometry studies show that the cationic ring-opening polymerization reaction is an exothermic reaction that increases the temperature up to 100 degrees above the room temperature. Also, the amount of generated heat by the cationic polymerization is related directly to the number of photoinitiators [22Weinmann W, Thalacker C, Guggenberger R. Siloranes in dental composites. Dent Mater 2005; 21(1): 68-74.
[http://dx.doi.org/10.1016/j.dental.2004.10.007] [PMID: 15681004] ]. This finding is in accord with the results of Vesna Miletic study in 2009 who measured the temperature rise due to silorane, ormocer and methacrylate-based composite resin polymerization.

Our findings however, were not in agreement with those of Tabatabaei et al, in 2009, who demonstrated that the temperature rise due to the curing units was influenced by the type of composite resin. They used Filtek Supreme (Nanofill) and Tetric Ceram (Hybrid) composite resins in their study which were different from ours. Their finding may be attributed to the difference in opacity and scattering of the light passing through the composite resin used by them [25Tabtabei M, Motevasselian F. Evaluation of temperature rise and DC in two composites using various curing units. Dental Faculty, Tehran University of Medical Science 2007.]. Considering the results of the current study, it seemed that the two composite resins, P90 and Z250 acted similarly in terms of light scattering and transmission.

In none of the LCUs, the composite resin had any significant effect on Tmax. In both types of composite resins with all the LCUs, maximum temperature rise occurred during the first seconds of irradiation and then dropped.

In Tabatabie’s study, type of composite resin played a significant role in reaching the maximum temperature during the curing process. That is to say, it took longer for Filtek Supreme (Nanofill composite resin) to reach its maximum temperature as compared with Tetric Ceram(Hybrid).This can be explained by the slower polymerization process of Filtek Supreme due to the smaller size of nanofillers and higher effective surface. Therefore, as the polymerization rate slows down, it takes longer for the temperature to reach its maximum level [25Tabtabei M, Motevasselian F. Evaluation of temperature rise and DC in two composites using various curing units. Dental Faculty, Tehran University of Medical Science 2007.].

The degree of conversion and temperature rise by the use of High Powered LED, LED and Argon laser curing lights were analyzed in P90 and Z250 composite resins. The obtained results were as follows: