Influence of Operator's Experience on the Shaping Ability of Protaper Universal and Waveone Systems: A Comparative Study on Simulated Root Canals

To assess the influence of operator experience on: shaping and centering ability, mean preparation time and presence of canal aberrations of ProTaper Universal and WaveOne systems on simulated root canals.

WaveOne system produced a lower amount of canal aberrations both in the hand of expert than inexpert operators. However, a WaveOne instrument breakage occurred in the hands of an inexperienced operator. No differences have been found in the evaluation of shaping ability with both systematics. Operator’s experience doesn't influence the shaping ability of ProTaper and WaveOne systems.

Experience factor could influence the centering ability in the use of both the systematics. However, WaveOne Primary reduce the mean preparation time and the presence of canal aberrations.

A number of 15, S-shaped ISO 15 0.02 taper endo training blocks (Dentsply Maillefer), were assigned to each group for a total of 60. Although these samples presenting qualitative differences with teeth, they represent a valid tool for in vitro evaluations because they permit an easier standardization and comparison of different shaping methods [11Lim KC, Webber J. The validity of simulated root canals for the investigation of the prepared root canal shape. Int Endod J 1985; 18(4): 240-6.
[http://dx.doi.org/10.1111/j.1365-2591.1985.tb00450.x] [PMID: 3865899] ]. Groups 1 and 2 were shaped by an expert operator, postgraduate in endodontics with more of ten years experience, while, an inexperienced operator, a student in the last year of study, with poor endodontic experience performed shaping in Groups 3-4 [12Mandel E, Adib-Yazdi M, Benhamou LM, Lachkar T, Mesgouez C, Sobel M. Rotary Ni-Ti profile systems for preparing curved canals in resin blocks: influence of operator on instrument breakage. Int Endod J 1999; 32(6): 436-43.
[http://dx.doi.org/10.1046/j.1365-2591.1999.00239.x] [PMID: 10709491] ]. A first survey of canals has been made with # 10 K file to assess the working length (WL), after that the glide path was achieved with PathFile 1, 2, and 3 (Dentsply Maillefer) at the WL. Subsequently, samples in groups 1 and 3 were shaped with ProTaper system (S1-S2-F1-F2), whilst groups 2 and 4 were shaped with WaveOne Primary reciprocating file in order to have in each method a tip size of 0.25 mm [13Berutti E, Chiandussi G, Paolino DS, et al. Canal shaping with WaveOne Primary reciprocating files and ProTaper system: a comparative study. J Endod 2002; 38(4): 505-9.]. A dedicated shaping program has been used for the utilization of each single file with parameters suggested by manufacturers (X-Smart; Dentsply Maillefer). Before use, each instrument was lubricated with Glyde (Dentsply Maillefer), whilst a rinse with 2.5% NaOCl was made after the use of each instrument. A set of new instruments was used for the shaping of each resin block. The preparation time has been recorded for each simulated canal from the end of glide path to the reaching the WL with the final file.

Pre- and post- instrumentation images were recorded with a digital camera (Canon 1100D, Tokyo Japan, ISO 100, f 18, 1/60 s) at a fixed points and magnification. To decrease movements during shooting photo has been used an at distance activation command, and the camera was mounted on a stable support. Furthermore, reference points were placed on the specimens to facilitate the subsequent superimposition. This last one has been carried out with the use of dedicated imaging software (GIMP 2.8, Free Software Foundation, Boston, USA). After that, superimposed images have been loaded on Autocad 2013 (Autodesk Inc, San Rafael, USA) software to perform shaping analysis (Fig. 1 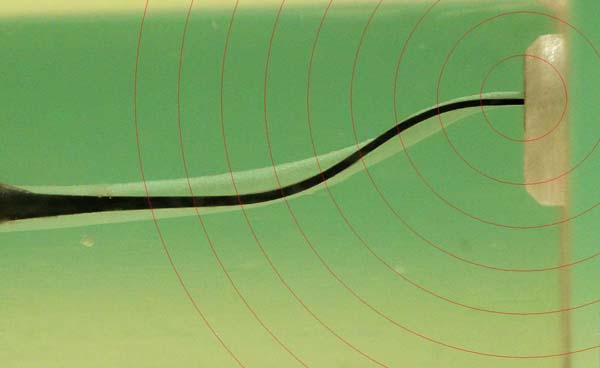 ). Amount of resin removed from the inner and outer aspect of the canal has been recorded at 1 to 9 mm (1 mm for each step) from the apex for a total of 18 measurements for each canal (Fig. 1

Presence of canal aberrations has been evaluated according to the parameters of Thompson and Dummer [16Thompson SA, Dummer PM. Shaping ability of Hero 642 rotary nickel-titanium instruments in simulated root canals: Part 1. Int Endod J 2000; 33(3): 248-54.
[http://dx.doi.org/10.1046/j.1365-2591.2000.00287.x] [PMID: 11307443] ] by a third operator blinded for this study. Thanks to photographic evaluation has been recorded the possible presence of: elbow, apical zip, perforation and danger zone. In addition, we evaluated if experience factor could increase the rate of instrument fracture when using ProTaper or WaveOne systems.

The mean preparation time, employed with the use of the two systematic, for each group has been reported in Table 1. According with these data, WaveOne system determines a reduction of time of shaping both in expert than in inexpert operator compared with ProTaper system.

The results of canal aberrations are summarized in Table 2. ProTaper groups showed a higher tendency to produce canal aberrations than WaveOne groups. However, an event of instrument breakage was found only in Group 4, while this event has not been reported in the remaining groups.

Table 1
Mean preparation time have been expressed as mean +/- standard deviations. Data are expressed in seconds. 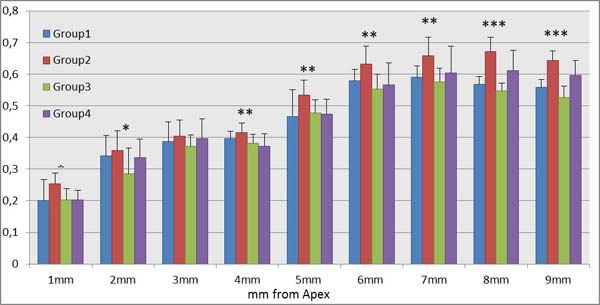 ). From the graph it can see that the experienced operator tends to shape more the apical area (1 to 3 mm from the apex) respect to the inexpert operator. The difference is significant regarding use of systematic WaveOne (p < 0,05)

The centering ability was evaluated between groups and reported in Fig. (3 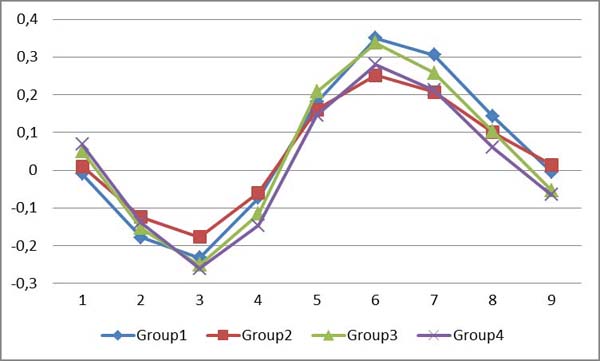 ). The difference was statistically significant only at levels 3 and 4 from the apex. At these levels the experience factor has allowed to obtain a better centering with both systematic. We noticed that WaveOne got skill centering best of systematic ProTaper, but the differences are not significant report in the apical part of the canal.

The shaping of the root canal system is one of the most important steps in endodontics, in order to create a path suitable for the subsequent action of irrigants. Niti alloy allows a simpler and easier action thanks to its elastic properties. A lot of instrumentation techniques have been developed providing clinicians various options for a correct root canal shaping. These systems differ among themselves for: cutting section, instruments' number, subtype of Niti alloy and dynamics of motion. However poor studies have evaluated the influence of operator experience on the shaping ability of different Niti systems [17Capar ID, Arslan H. A review of instrumentation kinematics of engine-driven nickel titanium instruments. Int Endod J 2015.
[PMID: 25630977] ]. For this reason we performed a comparison of a multistep rotational system (ProTaper) with a single-file reciprocating system (WaveOne) in the hands of operators with different experience. In this study we evaluated the shaping and centering ability, presence of canal aberrations and time of preparation on simulated root canals. Simulated root canals allow a direct visualization and represent a valid tool for comparative analysis [11Lim KC, Webber J. The validity of simulated root canals for the investigation of the prepared root canal shape. Int Endod J 1985; 18(4): 240-6.
[http://dx.doi.org/10.1111/j.1365-2591.1985.tb00450.x] [PMID: 3865899] ]. Results of our analysis revealed a reduction of time of preparation with WaveOne single file both in expert and inexpert operator. In addition, single file reciprocating system strongly reduce the possibility of canal aberrations (Group 3 vs Group 4), these data accord to others authors about a lower presence of aberrations and cracks using reciprocating than rotational systems [18Kansal R, Rajput A, Talwar S, Roongta R, Verma M. Assessment of dentinal damage during canal preparation using reciprocating and rotary files. J Endod 2014; 40(9): 1443-6.
[http://dx.doi.org/10.1016/j.joen.2014.02.015] [PMID: 25146029] ]. However, one instrument breakage occurred in the WaveOne inexpert group, this is in contrast with the results of previously studies in which no instrument breakage occurred with the use of reciprocating WaveOne file [19Generali L, Righi E, Todesca MV, Consolo U. Canal shaping with WaveOne reciprocating files: influence of operator experience on instrument breakage and canal preparation time. Odontology / Soc Nippon Dental Uni 2014; 102(2): 217-2.
[http://dx.doi.org/10.1007/s10266-013-0118-1] ]. Analysis on centering ability was performed after photographic superimposition, our data showed no differences between groups with the same experience factor rate. These results accord to previously study in which no differences have been found between centering abilities of ProTaper and WaveOne systems [20McRay B, Cox TC, Cohenca N, Johnson JD, Paranjpe A. A micro-computed tomography-based comparison of the canal transportation and centering ability of ProTaper Universal rotary and WaveOne reciprocating files. Quintessence Int 2014; 45(2): 101-8.
[PMID: 24389561] ]. However, comparing these parameters with Tukey test, we found a statistically difference in centering ability (p < 0,05) between groups 2 and 4 at 3-4 mm from the apex. Evaluating the amount of resin removed showed no difference in the shaping ability with ProTaper System suggesting no influence of operator experience in the management of this systematic. In the comparison of WaveOne groups with different experience statistically significant difference has been found in the use of this system from 4 to 9 mm. Data revealed that inexperienced operator tends to less prepare the apical portion of the canal (1 to 3 mm), because of a worse respect of WL, while he performed an higher amount of shaping in the coronal aspect (7 to 9 mm), probably due to execution of brushing movements.

Under the conditions and limitations of this study, operator’s experience doesn't influence the shaping ability of ProTaper and WaveOne systems. Experience factor could influence the centering ability in the use of both the systematics at the apical portion (3-4 mm). However, WaveOne system reduced the mean preparation time and the presence of canal aberrations. In addition, instrument breakage might occurred as a result of improper use of WaveOne file in the hands of an inexperienced operator, for these reasons, performing a glyde-path could help clinicians to reduce iatrogenic errors.