A patient presented with left parotid gland swelling after using chlorhexidine mouthwash for three days following sinus augmentation on the contralateral side of the maxilla. Diagnosis of parotid gland swelling due to rinsing with chlorhexidine was formulated after anamnesis, clinical examination, radiographs and ultrasound of the gland excluded other pathological conditions. The patient was subsequently advised to stop rinsing. However, on the evening of the same day, swelling increased and the patient presented to an emergency department where a single intravenous dose of methylprednisolone was administered.

Although unilateral or bilateral parotid gland swelling related to the use of chlorhexidine mouthwash is an uncommon adverse event, it must be suspected after other organic or infective conditions have been excluded. The precise pathogenic mechanism has not yet been determined and further studies should be carried out to better understand the pathophysiology of this uncommon phenomenon.

Unilateral or bilateral parotid gland swelling is also a reported side effect of chlorhexidine mouthwash [3Addy M, Moran J. Clinical periodontology and implant dentistry 2008; 744-65.]. Chlorhexidine, a bis-biguanide cationic antiseptic active against Gram-positive and Gram-negative bacteria, has been widely used in medical practice since its introduction in 1954 as an antiseptic cream and has been successfully used in dentistry since the 1970s and considered the gold standard for antimicrobial mouthwashes [4Flötra L, Gjermo P, Rölla G, Waerhaug J. Side effects of chlorhexidine mouth washes. Scand J Dent Res 1971; 79(2): 119-25.
[PMID: 5280246] ].

The patient underwent thorough clinical and instrumental examination. Swelling was evident in the left parotid region with no sign of inflammation (redness, fever, or pain) and in absence of any other symptom. All teeth on the left side were asymptomatic, with no sign of acute inflammation or infection. Clear saliva flowed from the Stenone duct after squeeze maneuvers on the left parotid gland. A panoramic radiograph and ultrasound examination of the gland were performed to exclude other pathological conditions, confirming the presence of edema and hyperemia of the gland (characterized by increased blood flow revealed by colour Doppler ultrasound, (Fig. 2 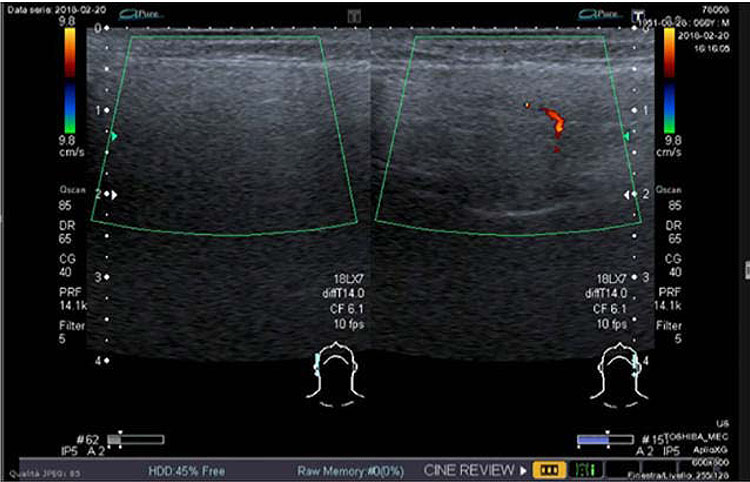 )), with no other organic alteration. Therefore, a diagnosis of parotid gland swelling due to chlorhexidine rinsing was formulated. The patient was advised to stop rinsing immediately and his condition was monitored over the following days. On the evening of the same day swelling increased and the patient presented at an emergency department where a single dose of intravenous methylprednisolone (40 mg) was administered, without suspending antibiotic therapy. The patient had never previously experienced similar adverse events.


After seven days, at suture removal, parotid swelling had decreased significantly and the patient reported no other signs or symptoms. Healing of the surgical wound (contralateral side) was uneventful.

Three weeks later, the patient presented at the follow-up appointment with no sign of swelling and complete remission of symptoms.

In differential diagnosis, infective etiology was excluded due to the administration of broad-spectrum antibiotic therapy and absence of typical signs of inflammation or infection such as pain, fever or altered salivary flow (in either quantity or quality).-The allergic reaction was excluded due to delayed onset of swelling and its unilateral localization. No salivary duct stones or masses were found and all diagnostic tests resulted negative. No trauma was reported by the patient and iatrogenic etiology related to the recent surgery (pneumoparotid, anesthesia) was excluded as sinus augmentation was performed on the opposite side. No bad habits (alcoholism, eating disorders, bruxism or gum chewing) were referred and all other possible diseases were excluded after analysis of the patient's medical history.

An alternative explanation is that chlorhexidine may reduce natural resistance of the mucous membranes to viral infection. Bacteriostatic effect of this mouthwash and its precipitating action on salivary mucins covering the oral mucosa reduces the bacterial load and may alter the oral environment [4Flötra L, Gjermo P, Rölla G, Waerhaug J. Side effects of chlorhexidine mouth washes. Scand J Dent Res 1971; 79(2): 119-25.
[PMID: 5280246] ]. However, parotid gland swelling in this case report arose after three days of chlorhexidine use which is too short a treatment period to cause deep alterations of the oral environment. Therefore, parotid swelling following the use of chlorhexidine mouthwash here described is possibly the result of the rinsing procedure itself. A complete explanation, however, remains unavailable.

Parotid gland swelling, although very uncommon, is a possible side effect of chlorhexidine mouthwash when other organic or infective conditions have been excluded. The correct clinical and instrumental examination should be performed in order to evaluate every possible pathological condition related to parotid swelling. Even if the pathophysiological mechanism has still not yet been clearly determined, the patient showed a good response to corticosteroid administration. Parotid gland edema as a side effect of chlorhexidine mouthwash should be considered in the differential diagnosis of acute swelling of the parotid gland and in appropriate preventive and therapeutic strategy.

No animals/humans were used for studies that are the basis of this study.

Informed consent was obtained from the patient prior to being enrolled in the study.

The Authors wish to acknowledge Dr. Gabriele Bazzocchi for the execution and interpretation of ultrasound examination.