Evaluation of Effect of Low-Dose Methotrexate on Osseointegration of Implants: A Biomechanical Study on Dogs

Methotrexate (MTX) is an immunosuppressive drug, widely used in inflammatory disturbances including rheumatoid arthritis. However, there is no consensus regarding the effect of MTX on implant osseointegration.

The purpose of this experimental study was to investigate the effect of low dose MTX on Bone-Implant Contact (BIC) of dogs.

Six mandibular premolar teeth (bilateral) of 8 mature dogs were extracted. After 3 months of healing, 6 implants (bone level, resorbable blast media surface) were inserted into the mandible of each dog (3 in each side). Dogs were randomly divided into a study group (receiving 2.5 mg/week MTX orally, 3 times per week for 4 weeks) and a control group each containing 4 dogs. In the 1st week, postoperative BIC was evaluated in 4 dogs, two from each group. In the 4th week, reverse torque and BIC were evaluated in the remaining 4 dogs. Data were analyzed with two-way ANOVA test for 95% confidence interval.

The reverse torque test of the 4th week, showed a satisfying osseointegration. Histopathologic evaluation revealed that the BIC was significantly higher in the control group in comparison to the MTX group in the 1st and 4th week. In addition, the BIC of both groups were significantly increased in the 4th week in comparison to the 1st week in both groups.

MTX has the potential to interfere with osseointegration process.

Dental implants are the current replacement for missing teeth. Direct bone formation on the surface of implants, later termed as Osseointegration, was first introduced by the experiments conducted by Branemark et al. in the late 1960s. Comprehensively, osseointegration is a direct structural and functional connection between bone and the surface

The first stage of Osseointegration which happens immediately after the implant insertion, is inflammation and extension of fibrin clot around the screw. The second stage is the attachment of osteoblasts to the surface of dental implant leading to a series of complex bone remodeling processes including osseointegration and bone resorption. The last stage is the formation of a close relation between bone and implant connected by collagenous filaments providing the long-term function of dental implant [3Tan N, Liu X, Cai Y, et al. The influence of direct laser metal sintering implants on the early stages of osseointegration in diabetic mini-pigs. Int J Nanomedicine 2017; 12: 5433-42.
[http://dx.doi.org/10.2147/IJN.S138615] [PMID: 28814861] ].

Rheumatoid Arthritis (RA) is a chronic systemic disease, primarily of the joints, marked by inflammatory changes in the synovial membranes and articular structures, widespread fibrinoid degeneration of the collagen fibers in mesenchymal tissues, and by atrophy and rarefaction of bony structures. Methotrexate (MTX) is an immunosuppressive drug which is widely prescribed in patients with rheumatoid arthritis. It also eliminates the inflammation reaction which is the first stage of osseointegration [10Sakakura CE, Marcantonio E Jr, Wenzel A, Scaf G. Influence of cyclosporin A on quality of bone around integrated dental implants: A radiographic study in rabbits. Clin Oral Implants Res 2007; 18(1): 34-9.
[http://dx.doi.org/10.1111/j.1600-0501.2006.01253.x] [PMID: 17224021] -15Cranney AB, McKendry RJ, Wells GA, et al. The effect of low dose methotrexate on bone density. J Rheumatol 2001; 28(11): 2395-9.
[PMID: 11708409] ]. However, Carvas et al. found no deleterious effect of MTX on osseointegration of implants inserted in the tibia of a rabbit model [16Carvas JB, Pereira RMR, Bonfá E, et al. No deleterious effect of low dose methotrexate on titanium implant osseointegration in a rabbit model. Clinics (São Paulo) 2011; 66(6): 1055-9.
[http://dx.doi.org/10.1590/S1807-59322011000600023] [PMID: 21808875] ].

This study was conducted in accordance with the Animal Welfare Act and the Guide for the Care and Use of Laboratory Animals. Ethical clearance was obtained from the Ethics Committee of Isfahan University.

Domesticated, having rabies, uncontrollable behavior with the risk of animal injury, life-threatening situation during the study.

This was an experimental study to evaluate the effectiveness of low-dose Methotrexate on osseointegration of dental implants on dogs.

Healthy dogs without rabies were collected and received rabies vaccine 2 weeks prior to the surgery.

The administered general anesthesia was Acepromazine 1% (0.2 cc/kg), Ketamine 10% (10 mg/kg), and Atropine (0.04 mg/kg) (IV) and was maintained using Halothane. After providing general anesthesia, a full thickness flap elevated to the mandibular premolar region. Second, third and fourth premolar teeth of each side were sectioned through an atraumatic extraction procedure and excised using a peristome. 4-0 non-absorbable suture was used.

Same general anesthesia protocol was performed after 3 months for the 2nd surgery procedure. The night before surgery dogs received 20000 IU of Penicillin and Streptomycin (1g/10kg) to provide 4 days of antibiotic coverage; after 4 days, another antibiotic regimen administrated to maintain the coverage until the 8th day. At this stage, a crestal incision was made at either side of mandibular premolar region and three identical implants with 4.1 mm diameter and 10 mm length (bone level, Resorbable Blast Media surface, DENTIS Korea) were placed straightforward, up to 1 mm in depth on the superior border of the alveolar bone, with more than 35-N insertion torque (each dog receiving 6 implants). Flaps were sutured with non-absorbable suture and the implants were maintained to heal to submerge.

To evaluate osseointegration in dental implants in the study group and the control group, BIC in the 1st and the 4th week, and reverse torque in the 4th week was measured.

In this study, a blind operator measured the reverse torque applying a 75 Ncm counterclockwise force using rachet. This technique is highly destructive and could solely be used in animal models.

Implants were excised by a trephine drill (size: 10 mm) and were maintained in 10% formalin solution. Specimens were mounted on resin blocks and sectioned (Accutom 50, Stuers, Copenhagen) to a thickness of 50 μm. Sections were stained with H&E staining technique. Stained sectioned were observed with a light microscope at 40× magnitude to measure the BIC. The BIC percentage was calculated for both sides of the implant on each of the 2 central sections obtained from each implant, using the actual BIC length as the numerator and the actual measured implant length of the implant as the denominator. Using Photoshop software version 7.0 (San Jose, CA, USA), 40× magnification images of the profile of the implant were obtained to reevaluate the BIC in samples. This profile image was then superimposed onto the surrounding bone. Two fields of bone, adjacent to the implant surface, one on each side of the implant, were acquired at 40× magnification. The implant profile was superimposed on the blank bone image of 3 locations: 150, 500, and 1,000 µm lateral to the original implant surface profiles. Then, the actual bone-implant contact (BIC %) was measured along each of the 3 superimposed implant interfaces and a mean BIC% was calculated. 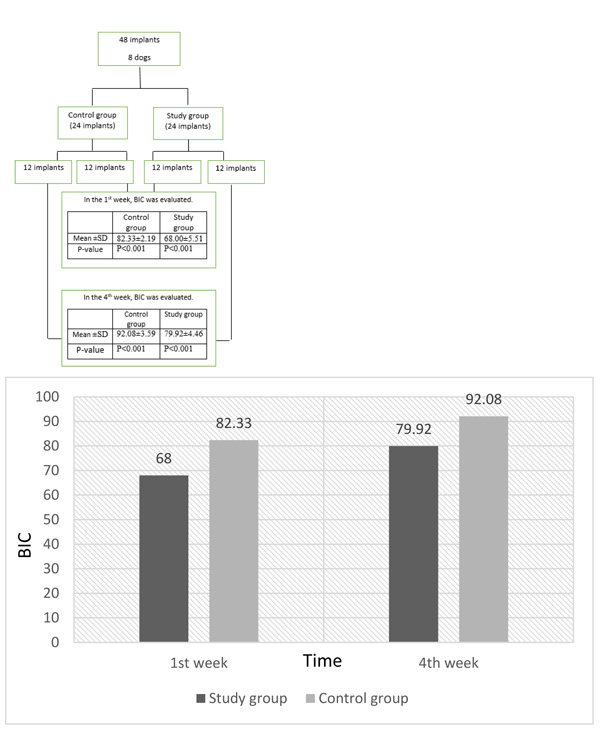 
Histological evaluation showed that in study and control groups, newly formed bone was woven in the 1st week and lamellar in the 4th week (Fig. 1A 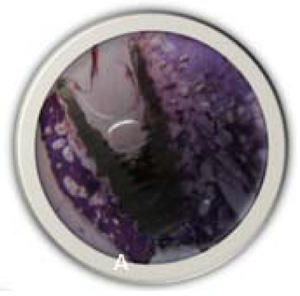 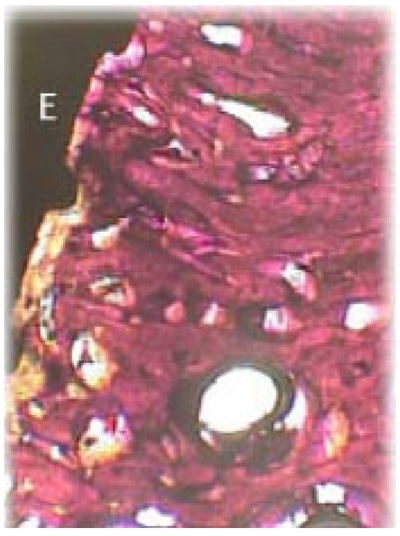 
The reverse torque of 75 Ncm was evaluated in the 4th week and all of the implants in both groups of study and control showed a satisfying osseointegration with the surrounding bone.

The purpose of the current study was to evaluate the short-term effects of low-dose MTX treatment for the osseointegration of dental implants in canine models.

The most effective treatment for RA is Methotrexate (MTX), the safest Disease-Modifying Antirheumatic Drug (DMARD). Other DMARDs and biologic agents can be added to MTX in order to achieve an optimal therapeutic effect. High-dose MTX inhibits the differentiation of osteoblastic cells resulting to suppression of bone formation. However, low-dose MTX has a bone-protecting effect by suppressing osteoclasts. Inhibition of Dihydrofolate Reductase (DHFR), Thymidylate Synthase, and Aminoimidazole Carboxamide Ribonucleotide Transformylase (AICART) by MTX leads to extracellular accumulation of adenosine which inhibits T-cell activation and eliminates inflammatory reaction. As the first stage of osseointegration consists of an inflammatory reaction, MTX have the potential to interfere the osseointegration process [11McInnes IB, Schett G. Pathogenetic insights from the treatment of rheumatoid arthritis. Lancet 2017; 389(10086): 2328-37.
[http://dx.doi.org/10.1016/S0140-6736(17)31472-1] [PMID: 28612747] -15Cranney AB, McKendry RJ, Wells GA, et al. The effect of low dose methotrexate on bone density. J Rheumatol 2001; 28(11): 2395-9.
[PMID: 11708409] ,].

Carvas et al. [16Carvas JB, Pereira RMR, Bonfá E, et al. No deleterious effect of low dose methotrexate on titanium implant osseointegration in a rabbit model. Clinics (São Paulo) 2011; 66(6): 1055-9.
[http://dx.doi.org/10.1590/S1807-59322011000600023] [PMID: 21808875] ] evaluated the osseointegratiom process in a rabbit model during an 18-week period. Groups of 6-8 rabbits were treated with saline, methotrexate, glucocorticoid, or methotrexate plus glucocorticoid and received implants after 6 weeks. Bone cortical thickness, total bone area around implant and BIC were measured. They found no tortious effect of MTX on the osseointegration rate which could be masked at this time. The alveolar bone of a canine model jaw has higher proximity to the humans, hence, in the present study, dogs were chosen and the BIC was evaluated in 1st and 4th week.

The difference in the results of the in-vitro studies demonstrates the possibility of osseointegration being affected by different biological mechanisms that need to be further evaluated.

The results of the current study reject the null hypothesis and reveals that BIC was increased in 1st and 4th week and it was higher in 4th week compared to the 1st week. It was significantly lower in MTX group in comparison to control group. Since the bone formed around dental implants during the 1st week isn’t mature and the osseointegration is n’t complete, the microscopic findings also showed woven bone formation. However, after 4 weeks, all of the samples revealed lamellar bone around the implants which explains the increment in BIC during the 4th week compared to the 1st week. Although the BIC in MTX group was different to the control group in the 4th week, the osseointegration was satisfying in both the groups after 4 weeks.

Further researches are needed to determine whether short term and long-term use of MTX can clinically interfere with the implant success rate in human with rheumatoid arthritis.

The effects of MTX on osseointegration was investigated in our study without the presence of inflammatory diseases i.e. rheumatoid arthritis which reduce the ability to adopt the results for a human model. While this can be counted as a weak point of the study design, it can also be assumed as a strong point because the changes in the osseointegration process were literally related to the use of MTX. Another limitation of this study was assessing the short-term effects of MTX, the results may be different in long-term evaluations.

In conclusion, with limitations of the present study, low-dose MTX has the potential to interfere with the osseointegration process which could be regarded as its side effect in patients with rheumatoid arthritis in the need of implant treatment.

Ethical clearance was obtained from the Ethics Committee of Isfahan University.

No humans were used for studies that are the basis of this research. This study was conducted in accordance with the Animal Welfare Act and the Guide for the Care and Use of Laboratory Animals.