Pyogenic granuloma tissues were enzymatically digested and the resulting single cells were cultured. Then, the cultured cells differentiated into adipocytes and osteoblasts cells. Flow cytometry analyses were performed on markers such as CD 90, CD 73, CD105, CD 45 and CD14. Other features were also analyzed including the effect of colony formation and potentials of differentiation into adipocytes and osteoblasts.

The cells derived from pyogenic granuloma tissue formed higher colonies similar to typical spindle-shaped fibroblasts. The cells were positive for mesenchymal markers such as CD 44, CD 271, CD 90, and CD 73, and negative for surface molecules such as CD 14, CD 34 and CD 45. Moreover, they successfully differentiated into adipocytes and osteoblasts.

The cells isolated from pyogenic granuloma could form CFU fibroblastic units expressing an appropriate marker panel of the cell surface antigen and adequate differentiation potential, all of which met the Cell Therapy International Association criteria for the definition of mesenchymal stromal cells. Pyogenic granuloma contains cells with stem cell properties.

Four samples of pyogenic granuloma were collected from the patients referring to Shiraz School of Dentistry. All samples were located on gingiva, and an experienced pathologist confirmed the diagnosis through pathological sections (Fig. 1

). The patients signed an informed consent before being enrolled in the study. The study was in accordance with the Declaration of Helsinki and was approved by the local ethics committee.


The samples of pyogenic granuloma tissue were transferred to PBS-EDTA solution with 1% penicillin/streptomycin and 1% fungizone (both from Gibco/Invitrogen Company, Carlsbad, California, USA). The tissues were broken under sterile conditions by using enzymatic digestion while occasionally shaking for 1 hour in a solution of 3 mg/mL collagenase type 1, and 4 mg/mL dispase type 2 (both from Sigma, St. Louis, Missouri, USA). The resulting single-cell suspension was passed through a 70-micron cell filter (Biosciences BD, San Jose, California, USA) and centrifuged for 10 minutes to remove the supernatant remaining enzymes. The cells were re-suspended in the environment and each sample was separately used for the next steps including evaluation of the potential of colonization or cultivation for further analysis.

The single-cell suspensions were seeded onto cultivation flasks within the α-MEM along with 4 mM GlutaMax, 100 U/ml penicillin, 100 mcg/ml streptomycin and 20% FBS (all from Gibco/Invitrogen). The cells were cultured for 72 hours at 37°C in 5% CO2 and 90% humidity. Then, the free cells and residuals were removed and fresh medium was added to the adherent cells. The medium was changed twice a week until the flask reached 80% confluence. The cells were then released with Trypsin- EDTA (Gibco/Invitrogen) and the second culture was performed. They were passaged three times before they could be used for differentiation analysis or flow cytometry.

To evaluate the efficiency of the derived single-cell colonization (colony-forming unit fibroblast assay [CFU-F]), the primary cells derived from the pyogenic granuloma were cultured on six-chamber plates with the living cell concentration of 1000 cells per ml from the culture medium. The single-cell derived colonies were defined as those units with more than 50 cells.

As formerly mentioned, the third passage cells were collected for adipogenic differentiation and cultured in MesenCult medium along with 10% adipogenic stimulatory supplements (both from STEMCELL Technologies Inc., Vancouver, British Columbia, Canada) with a density of 2×103 cells in a milliliter of medium within the two-chamber cultivation slides according to the manufacturer's instructions. The cells were cultured for 3-4 weeks. Half of the media were changed only when the ambient color turned yellow. When the cells exhibited appropriate morphological changes, they were analyzed by using Oil Red staining (Sigma). In order to perform the staining, the cells were incubated in 4% formalin containing 1% calcium chloride for one hour. The cells were then stained with Oil Red O solution for 10-15 minutes, and in ethanol 70% for one minute; and then, washed with distilled water.

For osteogenic differentiation, the third passage cells were collected and cultured in NH OsteoDiff medium (Miltenyi Biotec GmbH, Bergisch Gladbach, Germany) with a density of 104×3 cells in a milliliter of the medium according to the manufacturer's instructions. The medium was replaced twice a week for three weeks. To verify the differentiation, after suitable morphological changes, the cells were washed with PBS and incubated in methanol for 10 minutes. They were stained with 1.0 M solution of red Alizarin in 25% ammonia water for 24 hours and washed with distilled water.

The pyogenic granuloma-derived cells attached to plates two to five days after the primary culture. These cells reached confluence in 12-21 days, with a proper appearance similar to spindle-shaped fibroblast (Fig. 2A 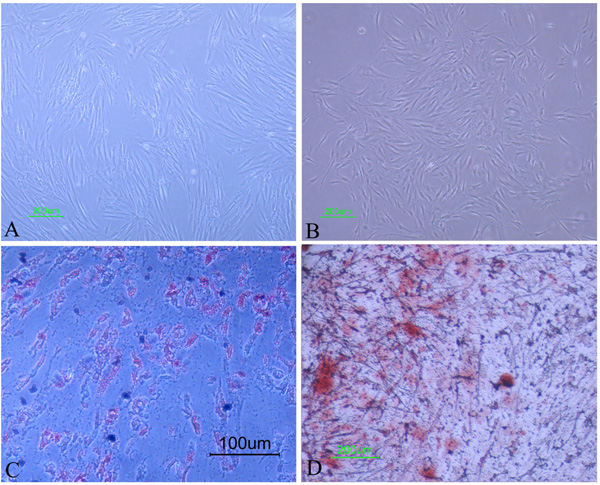 ). They could also successfully form single-cell derived colonies (Fig. 2B

Adipogenic differentiation was confirmed through morphological changes and the corresponding staining. One week after cultivation in adipogenic medium, the cells showed small isolated vacuoles whose number and size increased over time, and all of them were stained with Oil Red O (Fig. 2C

Analysis of the flow cytometry of the cells obtained from cultures of pyogenic granuloma-derived cells showed that the cells were positive for mesenchymal markers such as CD 44, CD 271, CD 90, CD 73, and negative for the surface molecules like CD 14, CD 34 and CD 45. These show a heterogeneous phenotype for CD105 and CD106 (data from one of the samples are shown in Fig. (3 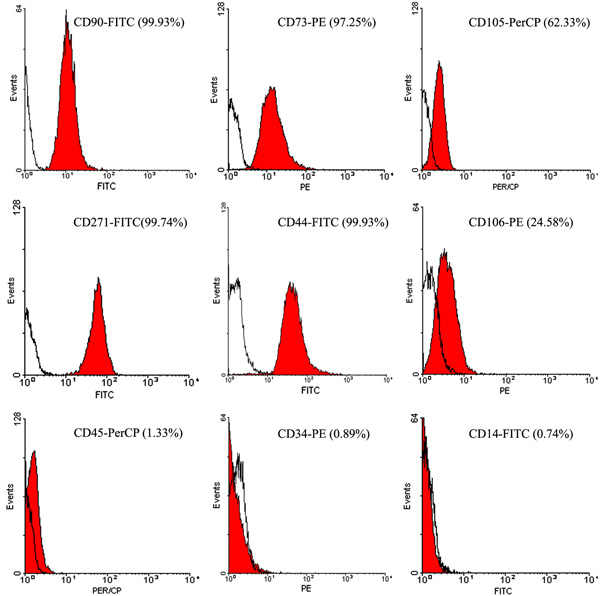 This study evaluated the possibility of stem cell purification from samples of soft tissues pyogenic granuloma of the oral cavity. These tissues were found to contain cells with properties of stem cells.

Among the limitations of clinical use of the stem cells derived from pyogenic granuloma is the increased risk of contamination as the result of being exposed to the contents of oral cavity. To overcome this limitation in this study, antibacterial and antifungal supplements were employed from the very moment of tissue collection up to the final stages of sample preparation.

Based on the findings of this study, it can be concluded that pyogenic granuloma contains cells with the stem cell properties. Further studies in this area are recommended to investigate more practical details about the possibility of clinical use of stem cells isolated from pyogenic granulomas.

The present study was in accordance to the Declaration of Helsinki and was approved by the local ethics committee.

No animals were used in this research. All research procedures followed were in accordance with the ethical standards of the committee responsible for human experimentation (institutional and national), and with the Helsinki Declaration of 1975, as revised in 2008.

Informed consent was obtained from all patients prior to being enrolled in the study..