Comparison of the Stress Strain Capacity between Different Clear Aligners

The rife use of aesthetic appliance in orthodontic treatment requires the study of the properties of the materials they are made of.

The aim of the present study was to evaluate the dimensional stability of clear aligners made of three different materials after the application of in-vivo dynamic stress and in-vitro static stress.

Three different aligners made of different materials (PET-G; PET; SmartTrack®), prepared on the dental arch of the same patient, were tested. For each material, three aligner samples were manufactured: one to be used in-vivo, one to be tested in-vitro, and one to be used as a control.

PET seems to have the lowest percentage of deformation; PET-G and SmartTrack® showed a reduced deformation going from the posterior to the anterior area. The contact with human saliva induces a greater deformation.


* Address correspondence to this author at the Department of Clinical and Experimental Medicine, University of Foggia, Foggia, Via Rovelli, 50, 71100, Italy; Tel: 0881588086; E-mail: michele.laurenziello@unifg.it

The aim of the present study was to evaluate the dimensional stability of CA after two types of stresses: in-vivo stress during 15 days wear-time, and in-vitro compressive strain.

One patient (male, 29 years of age) at the Orthodontic department of University of Foggia was selected and enrolled in the present study. The participant provided written informed consent to be involved in the study. The patient presented a moderate crowding of upper and lower incisors, no prosthetic rehabilitation, no fillings, no oral parafunctions, no Temporo-Mandibular Joint disorders, no periodontal infection and good oral hygiene.

Patient’s impressions were taken with Polyvinilsylossane material and sent to three different CA manufacturers to obtain a clinical setup and a set of aligners. This allowed to obtain three different sets of CA made of different materials: the SmartTrack® (Align Technology), PET-G, and PET. No attachments were used to increase the aligner’s stability. The thermoforming procedures in the present study were performed under the respective manufacturer’s recommended conditions, and all the aligners had the same thickness of 0.8 mm. The first aligner of each set was programmed as a passive aligner, without any tooth movement. Three copies of the first aligner were requested to each manufacturer, to have three samples of each material: One to be used in-vivo, one to be tested in-vitro, and one to be used as a control.

One aligner of each material was worn by the patients for 15 days, 22 hours per day. A wash-out period of two-weeks was used between each use with different CA of a different manufacturer. The patient was instructed to wear the aligner for the recommended time, and to remove it during meals, during oral-hygiene procedures, and during the assumption of any liquids except water. The aligners were cleaned using only cold water and a soft toothbrush.

An additional set of patient’s impressions was used to produce a dental cast used for in-vitro testing. Dental casts were poured on a custom-made resin base, designed to be easily secured to the Instron machine (Fig. 1 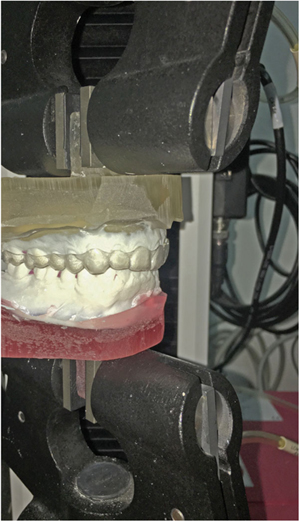 
One CA of each material was set on the dental cast, then the casts were settled into occlusion and secured to an Instron 3343 universal testing machine with a loading cell of 1kN. A compressive force of 50N was applied (Fig. 2 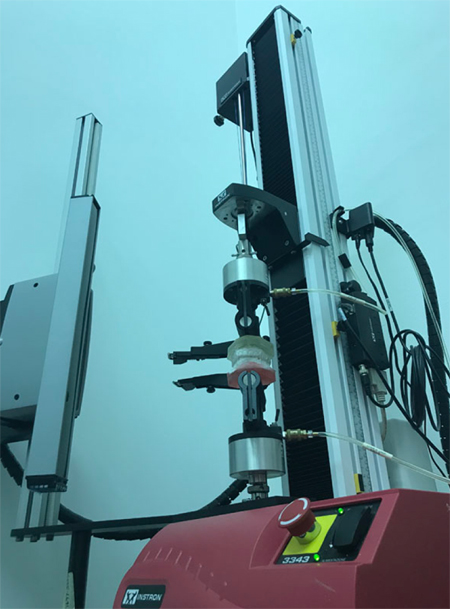 ) during a 6 seconds increase, then applied constantly for 15 minutes (Fig. 3 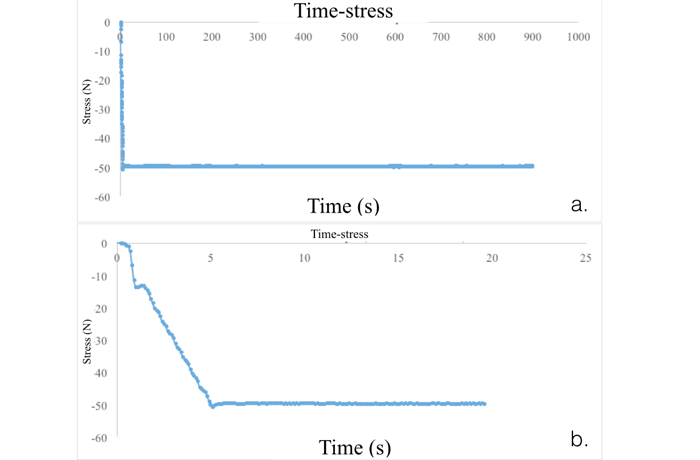 At the end of the test, the tested and control aligners were covered with a 3D scan spray (Helling 3D Spray) then scanned using a laboratory scanner (3 Shape Scanlt Manager tps .Ink, 3Shape, Copenhagen, Denmark).

The scanned aligners were evaluated with a dedicated software (3 Shape Orthoviewer, 3 Shape, Copenhagen, Denmark). Two points were identified on right and left first molar (posterior area), first premolar (middle area), and canine (anterior area): vestibular apical point of dental crown, defined as “base of the tooth point” (BoT point), and the intersection point of vertical and horizontal axis, defined “facial axis point” (FA point). The authors measured the distance between right and left BoT points on first molar, first premolar, and canine, and the distance between right and left FA points for the same teeth (Fig. 4

). These measurements were used to compare the dimensional stability of CA after in-vivo dynamic stress and in-vitro static stress within each material, and between different CA materials. To have a summary value for every material, the distances at the anterior, middle, and posterior parts for both in-vivo and in-vitro tested aligners were pooled and mean and standard deviation were calculated. 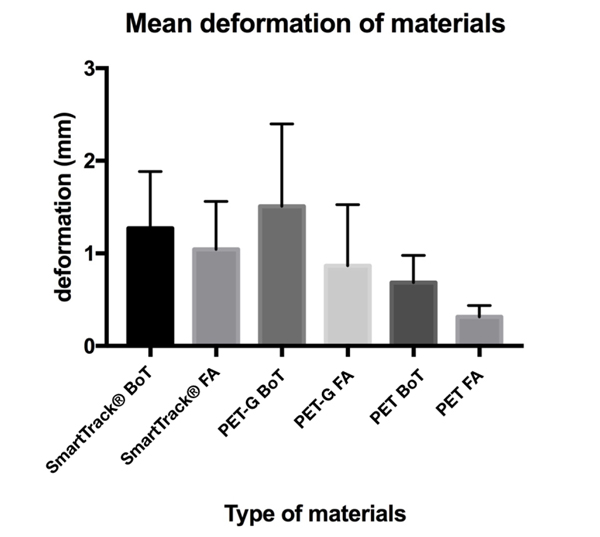 ). The difference was higher in the posterior part than the anterior part. SmartTrack® showed higher deformations than the PET in the static and dynamic test. PET-G had less deformation in the anterior area than the other materials. Examining the summary values of each material, in general PET showed the smallest deformation, followed by SmartTrack® and PET-G (Tables 4 and 5).

Table 3
Static and Dynamic evaluation of the differentials obtained on tested materials.

The dental movement may not be adequate for three reasons: the lack of patient’s compliance, the planning of an excessive amount of dental movement, the inadequate transfer of the dental movement from the aligners to the tooth [24Schott TC, Göz G. Color fading of the blue compliance indicator encapsulated in removable clear Invisalign Teen® aligners. Angle Orthod 2011; 81(2): 185-91.
[http://dx.doi.org/10.2319/052610-288.1] [PMID: 21208067] ].

The efficacy of the aligner treatment may be also influenced by the deformation of the CA during the 15 days treatment period. In the present paper, the authors evaluated the CA structure deformation following in-vivo stress (the patient worn the CA for 15 days) and in-vitro static stress with a force of 50 N for 15 minutes. The deformation was evaluated at the posterior part of the CA (i.e. at the first molars of BoT point and FA point), in the middle part (i.e. at the first premolars of BoT point and FA point) and in the anterior part (i.e. at the canine of BoT point and FA point). The best performance evaluated was that of the Polyethylenterephthalat (PET). All materials presented a reduction of deformation passing from the posterior part to the anterior part both at the BoT point and FA point. The mean deformation at the BoT point was of 1.27 mm (SmartTrack®), 1.51 mm (PET-G) and 0.68 mm (PET); at the FA point, the mean deformation was of 1.04 mm (Sma-rtTrack®), 0.87 mm (PET-G) and 0.31 mm (PET). Barbagallo et al., suggest that the deformation of the CA is related to a possible change in the mechanical properties of the aligner foils due to hygroscopic expansion caused by the presence of saliva and the different elastic rebound behavior of the displacement teeth due to their elastic anchorage to the Periodontal Ligament (PDL) [31Barbagallo LJ, Shen G, Jones AS, Swain MV, Petocz P, Darendeliler MA. A novel pressure film approach for determining the force imparted by clear removable thermoplastic appliances. Ann Biomed Eng 2008; 36(2): 335-41.
[http://dx.doi.org/10.1007/s10439-007-9424-5] [PMID: 1808 5439] ]. The present experimental setup allowed to isolate the effects of the oral cavity environment (i.e. the oral temperature and the saliva adsorption) from the effects of pure mechanical stress (i.e. the effects of biting force, simulated by an Instron machine).

Investigations about aligners must continue to find the best compromise between chemical properties, mechanical properties, aesthetics, and patient comfort. The balance between mechanics and aesthetics must also increase the reliability of these intraoral devices in order to improve the predictability of dental movement. In this research, the authors have shown that:

The participant provided written informed consent to be involved in the study.