The Association between Reported Dental Pain Symptoms and Increased BMI in Indonesia: Evidence From The Indonesian Family Life Survey

The objective of the current study was to evaluate the association of overweight/obesity to be the predictor of the occurrence of dental pain.

Data from the Indonesian Family Life Survey (IFLS) from five consecutive survey waves (1993, 1997, 2000, 2007 and 2014) that involved more than 30.000 participants and their offsprings that were grouped into three different age categories (0-4.9 years old; 5-19.9 years old; and 20-49.9 years old) were gathered and analyzed for Odds Ratio (OR) and Confidence Interval (CI). Trends of childhood overweight/obesity, the occurrence of dental pain, as well as the likelihood of individuals with childhood overweight/obesity to develop dental pain were analyzed by using STATA Data Analysis and Statistical Software version 13.

The results of the current study revealed that all age groups exhibited an increase in numbers when it comes to the prevalence of overweight/obesity from the first wave (in 1993) up to the latest wave (in 2014). It was also revealed that those who were in the 0-4.9 years old age group, were those who were more likely to develop dental pain (OR:1.12; 95% CI: 0.84-1.5; p:0.44).

Despite the wave to wave variation, overweight/obesity has the potential to be associated with future dental problems, with dental pain in particular.

IFLS is one of the nationally-representative surveys conducted in Indonesia. Starting in the year 1993 (wave 1), this survey sampled 13 out of the 27 provinces in Indonesia with more than 30.000 participants involved. The next waves (that involved two generations) were conducted in years 1997, 2000, 2007, and 2014, aiming to trace the same families/individuals and their off-springs from wave 1 (1993). More complete and detailed information regarding the sampling method and sample collection have been published in previous papers [35Frankenberg E, Karoly LA, Gertler P, Peterson CE, Wesley D. The 1993 Indonesian Family Life Survey: Overview and Field Report 1995.-38Rachmi CN, Agho KE, Li M, Baur LA. Stunting, underweight and overweight in children aged 2.0-4.9 years in Indonesia: prevalence trends and associated risk factors. PLoS One 2016; 11(5)e0154756
[http://dx.doi.org/10.1371/journal.pone.0154756] [PMID: 27167973] ]. In summary, the survey was conducted in 1993 using stratified random sampling to find the respondent. The survey itself comprised of questionnaires and followed by anthropometric measurements. The methods used in each following wave were similar to the one in 1993.

The data collected in the questionnaires were recorded in seven books which covered different ranges of information from individual-level information (age, sex, relationship with household head, anthropometric measures, etc.), household-level information (location of the house, economic and non-economic measures, etc.) as well as community-level information such as facilities in the area. In regards to dental pain questions (also known as toothache), this particular question was asked under the “Acute Morbidity” section. Participants were asked whether they have or had experienced toothache for the last four weeks (one question). All health-related measurements were performed by trained nurses. All of the data from the 5 waves have been publicly released. In this research, we combined all the related information from different books in each wave. One of the strengths of the IFLS is its high re-contact rate (the number of the same participants being re-contacted for the subsequent wave), as every subsequent wave can re-contact more than 90% of households and individuals from wave 1 [35Frankenberg E, Karoly LA, Gertler P, Peterson CE, Wesley D. The 1993 Indonesian Family Life Survey: Overview and Field Report 1995.-37Serrato C, Melnick G. The Indonesian family life survey overview and descriptive analysis. Santa Monica, California: RAND 1995. Contract No.: DRU-1191-AID].

All analyses were performed using STATA Data Analysis and Statistical Software version 13 [44Corp S. STATA statistical software: Release 13 2014.]. We conducted frequency tabulations to describe distributions. The results are presented as numbers and prevalence in percent. The odds ratio of overweight/ obese children having toothache within the last four weeks was computed by dividing the probability of having toothache symptoms in overweight/ obese children to the probability of non-overweight (healthy weight and underweight combined) children. Significance level (p-value) was set at < 0.05.

The current study analyzed the data based on three different age groups and five waves. The first analysis revealed that there was an increase in trends when it comes to being overweight (Table 2). For example, for the 0 to 4.9 years old (children) age group, despite the growing number of those who considered being healthily weighted, yet, there was a growing percentage (18.10%, 2014) of those who were in the overweight category. When all three categories were compared, the highest growth percentage for the overweight category occurred in the 20 to 49.9 years old (adults) age group, whereas the percentage increased as much as 18.59% (15.93% in 1993 up to 34.52% in 2014).

The next analysis performed was on those in every age group that complained about dental pain in the last four weeks of the survey period (Table 3). In line with the increasing trend of being overweight, this part of the analysis showed that, as the year progressed, more people complained about experiencing dental pain. There was a decrease in percentage in all age groups in the fourth wave (2007), but the percentage went right back up for all age categories in 2014, with the highest percentage exhibited by those in the children and adolescents (5 to 19.9 years old) age group.

When the two variables were associated (Table 4), it showed that the 5 to 19.9 years old (children adolescent) age group had the highest percentage of individuals complaining of dental pain as compared to those who did not by the fifth wave of the survey period (the year 2014). In regard to the complaint of dental pain, it is interesting to note that in 2007, every age category showed a decrease as compared to the previous wave (the year 2000), and has an increase in percentage in the fifth wave (the year 2014). 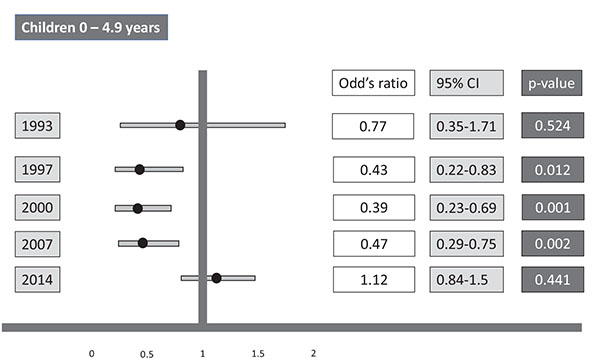 Table 3
Percentage of children, adolescents, and adults with toothache symptoms within the last 4 weeks (number, percentage).

Table 4
Number of children, adolescents, and adults with toothache symptoms within the last 4 weeks based on weight status (number, percentage). 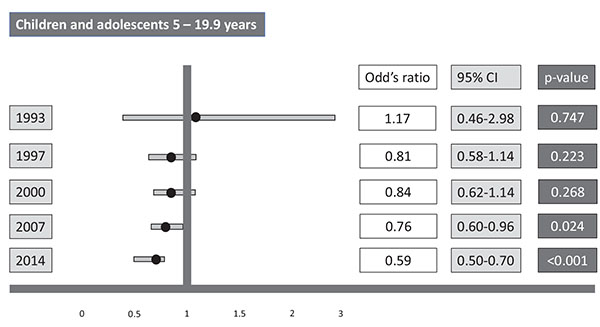 The last analysis of the current study was the odds ratio for those who were in 20 to 49.9 years old (Adult) age group and overweight, having dental pain as compared to individuals who were in this age group without being overweight (Fig. 3 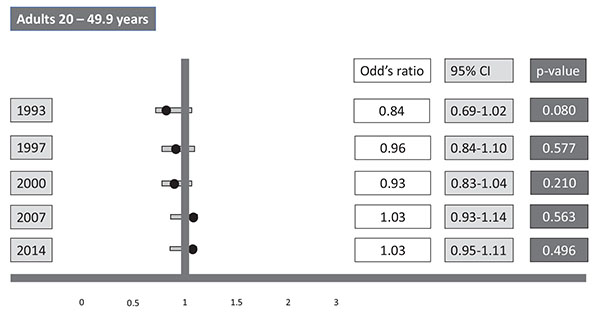 To conclude, despite the age-related variation, overweight/obesity has the potential to be the predictor for the occurrence of dental problems with dental pain symptoms in particular.

The data supporting the findings of the article are available at the RAND Corporation website and can be downloaded through the following link: http://www.rand.org/ labor/FLS/IFLS.html.