To assess the cervical spine derangement among working dentists using MRI in order to establish a relationship between job parameters and cervical derangement changes.

A cross-sectional study was carried out at the MRI unit of Al-Sader Medical city of Al Najaf health directorate from June 2015 to December 2016. The involved 43 working dentist volunteers of varying age and sex, who underwent an MRI of their cervical spine.

Intervertebral Discs (IVD) degeneration was the most frequent finding, followed by IVD herniation.


* Address correspondence to this author at the Dept of OMF Surgery, Faculty of Dentistry, The Islamic University, Najaf, Iraq; E-mail: kufa54@gmail.com

The development of various diagnostic techniques like MRI has been a prime encouragement for researchers to look into such cervical changes among medical professionals. This is because MRI is very safe, non-invasive, and highly sensitive for detecting changes in the skeletal structures like Cervical Spondylotic Changes (CSC), in both symptomatic and asymptomatic patients. Thus, MRI can detect early stages of disc degeneration and has been a preferred method of choice in assessing disc integrity in clinically symptomatic individuals [3Tirgar A, Javanshir K, Talebian A, Amini F, Parhiz A. Musculoskeletal disorders among a group of Iranian general dental practitioners. J Back Musculoskeletal Rehabil 2015; 28(4): 755-9.
[http://dx.doi.org/10.3233/BMR-140579] [PMID: 25547232] , 4Alexopoulos EC, Stathi IC, Charizani F. Prevalence of musculoskeletal disorders in dentists. BMC Musculoskelet Disord 2004; 5: 16.
[http://dx.doi.org/10.1186/1471-2474-5-16] [PMID: 15189564] , 10Rafie F, Zamani Jam A, Shahravan A, Raoof M, Eskandarizadeh A. Prevalence of upper extremity musculoskeletal disorders in dentists: Symptoms and risk factors J Environ Public Health 2015; 2015].

1.1. Anatomy of the Cervical Spine

Cervical spines constitute the upper segment of the vertebral column which extends from base of the skull to the thorax. There are seven vertebrae, namely C1- C7, with the primary function of skull support and brain and spinal cord maintenance in their relative positions [22Martini F OW, Garrison CW, et al. Fundamentals of anatomy & physiology. Prentice Hall College Div ISBN (0130172928) ].

Decrease in the T2 signal of IVD is age-related. It predisposes to CSC in the discs such as loss in disc height, disc herniation, and annular tears as compared to normal aging discs [12Scott E, Forseen M, Neil M, Borden MD. Imaging Anatomy of the Human Spine: demosMEDICAL 2016.].

3. Instability of spine with arthritis,

4. Hypertrophy of joint capsule, and

Thus, the study aims at assessing the cervical spine derangement among dental professionals using MRI in order to establish a relationship between job parameters and cervical derangement changes.

A cross-sectional study was carried out at the MRI unit of Al-Sader Medical city of Al Najaf health directorate during an 18 months period, i.e. June - 2015 to December -2016. This involved 43 working dentist volunteers of varying age and sex, who underwent an MRI of their cervical spine (Fig. 1

All the volunteers gave their consent to participate in this study and completed a questionnaire prior to the MRI investigation. The questionnaire included details like their name, gender, weight, height, years of work, hours of daily work, work posture, previous medical history of trauma in the cervical region, previous MRI investigations, any systemic disease(s) or any problem(s) interfering with the MRI test (Fig. 1

Any working dentist was included in this study whether they had symptoms or not. The symptoms included neck pain, upper limb radiculopathy, headache, trouble walking, etc.

Anyone who underwent previous surgery or significant trauma to the cervical spine or who contraindicated to MRI reports were excluded from the study.

All volunteer dentists were examined by Philips, Achieva, 1.5 tesla model 2010 MRI machine. The examination was done in the supine position with the RF coil under the neck. The protocols used were: sagittal T1W image, which is produced using a spin-echo (SE) sequence. This included a short echo time (TE < 30 ms), short repetition time (TR 300-700 ms), axial and Sagittal T2 weighting with a repetition time (TR 2000-3000 ms) and long echo time (TE 80 ms). All the results were reviewed by specialists in Diagnostic Radiology, experts in cervical changes and neuro-imaging.

Table 1
Volunteers and their medical history.

The data collected from the questionnaires stated that 13 professionals had more than 20 years of experience, followed by 9 having 16-20 years of experience, 5 having 11-15 years, 13 having 6-10 years, and 3 having <=5 years of experience. Out of this, 26 professionals worked 4-6 h per day and 5 worked more than 6 h a day. The specialty, posture of work, and other additional things have been clearly stated in Table 2. The table data stated that the maximum respondents were general dental practitioners (20 of them). of 43 respondents, 33 had twisted work posture, and around 81.4% of respondents used suntem chair type.

Osteophytes were considered to be any osseous protrusion from the vertebral body outside its normal borders in anterior or posterior directions. The posterior part was divided into central or paracentral osteophytes, which were observed in T1W and T2W images in axial and sagittal views.

Disc herniation was considered as any protrusion of non-osseous disc material beyond borders of the endplate of the adjacent vertebral body, and classified as follows: 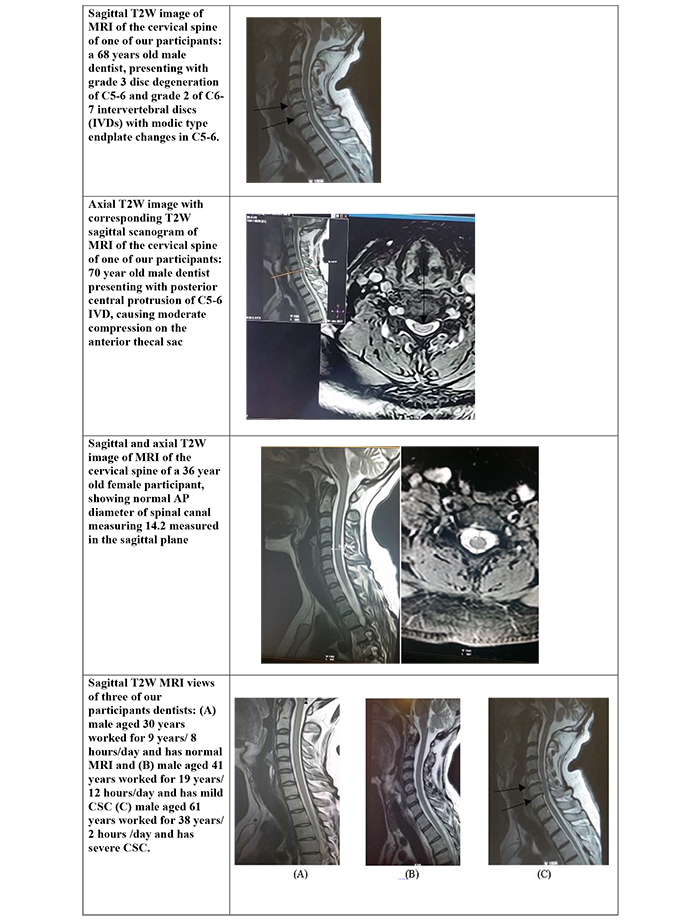 Twenty-seven (62.8%) respondents showed at least a single positive MRI change and 16 (37.3%) showed normal MRI. Positive MRI findings are mainly seen in males accounting for 17 (39.5%) participants, while females were 10 (23.2%). Negative findings were also more common in males than in females (Fig 3

). All the findings were due to degenerative disc disease.

(2) Gender showed no significant correlation with CSC, although some CSCs were seen more frequently in males (8 of them showed herniation plus disc degeneration), but it did not reach values to be statistically significant (P value= 0.6).

(3) Also, CSCs were seen more frequently in participants who worked in twisted posture but it did not reach values to be statistically significant.

But after adjustment of age, gender, and body mass index, there was no correlation between years of work and MRI changes, which stated that the changes could be due to the ageing process rather than dental work as shown in this study (Appendix C). There was no statistically significant correlation between symptoms and MRI changes as shown in Table 7. No significant correlation was found between CSC and work posture, type of dental chair or presence or absence of assistants and the details have been presented in Appendices D-G.

Table 5
Correlation between MRI changes and daily hours of work.

Table 6
Correlation between different MRI findings and years of work.

Table 7
Correlation between MRI findings with symptomatic and asymptomatic participants.

This study considered is the first study using MRI to detect cervical changes among working dentists. We could not find any previous similar imaging studies which did an MRI on dental professionals to compare with. However, many clinical studies revealed that MSDs are common among dentists. They have a higher incidence of work-related MSDs than workers of other occupations [1Huang CC, Kuo PJ, Hsu CC, et al. Risk for cervical herniated intervertebral disc in dentists: a nationwide population-based study. BMC Musculoskelet Disord 2019; 20(1): 189.
[http://dx.doi.org/10.1186/s12891-019-2559-3] [PMID: 31054566] -7Dajpratham P, Ploypetch T, Kiattavorncharoen S, Boonsiriseth K. Prevalence and associated factors of musculoskeletal pain among the dental personnel in a dental school. Journal of the Medical Association of Thailand = Chotmaihet thangphaet 2010; 93(6): 714-21.] . .Neck pain and upper limb numbness are the most common symptoms and occur in more than 85% of dentists after they start working [15Ohlendorf D, Erbe C, Hauck I, et al. Kinematic analysis of work-related musculoskeletal loading of trunk among dentists in Germany. BMC Musculoskelet Disord 2016; 17(1): 427.
[http://dx.doi.org/10.1186/s12891-016-1288-0] [PMID: 27756271] ]

Many dentists or faciomaxillary surgeons, if not all of them, blame their routine dental work as the main cause of their neck pain and/or radiculopathy, which are relatively common symptoms among the dentists. Many of the dentists may seek multiple sick leaves, changing jobs, or even retirement due to ill health. In the latter case, MSDs are the most common causative factor accounting for 55% of all ill-health retirements [9Brown J, Burke F, Macdonald E, Gilmour H, Hill K, Morris A, et al. Dental practitioners and ill health retirement: causes, outcomes and re-employment. British dental journal 2010; 209(5): E7-.
[http://dx.doi.org/10.1038/sj.bdj.2010.813] , 18Hodacova L, Sustova Z, Cermakova E, Kapitan M, Smejkalova J. Self-reported risk factors related to the most frequent musculoskeletal complaints among Czech dentists. Ind Health 2015; 53(1): 48-55.
[http://dx.doi.org/10.2486/indhealth.2013-0141] [PMID: 25327296] ].

MRI of cervical spines derangement among working dentists was found to be positive (86%) and all of the changes were related to cervical spine spondylosis. The most common finding is disc degeneration followed by disc herniation. The frequency of CSC distributed by levels, i.e. from the most to the least severe levels: C5-6, C4-5, C3-4, and C6-7. There was no statistically significant correlation between symptoms and MRI findings of CSC disc degeneration with and without disc herniation, which significantly increased with an increase in the age in the case of symptomatic as well as asymptomatic participants. There was no overall statistically significant correlation between gender and CSC, whether in symptomatic or asymptomatic participants.

CSC was seen to be significantly correlated with BMI and family history of CSC. No statistically significant correlation was found between years of work and daily hours of work with CSC; however, this result may not reflect the reality, because of the small sample size in this study, which involved more younger participants that responded. No significant correlation was found between CSC and work posture, type of dental chair, or the presence or absence of assistants.

The Current Study Recommends the Following:

(2) The authors encourage further studies with a larger sample size.

The research has been done according to the approval of the health authority in Najaf hospital, Iraq.

Written informed consent was obtained from each participant prior to the study.

The authors confirm that the data supporting the findings of this study are available within the article.

We appreciate the hard work of Dr Fatimeh Shimirty and Dr Haider Al Muaala for their assistance in collecting the data and reviewing the study.

APPENDIX A
Questionnairs and consent form.

APPENDIX C
Correlation of MRI findings with years of work and daily dental work hours, after adjustment for age, gender and BMI, showing no significant correlations.

APPENDIX E
Correlation of type of dental chair with CSC.

APPENDIX F
Correlation of the presence of dental assistant with CSC