Oral health affects the general health and quality of life of an individual. It has been well documented that the absence of family support influences the general and oral health of children. Factors that lead to the development of a disease are likely to have their roots in a complex chain of environmental events that may have begun years before the disease occurs. The purpose of this study was to examine the prevalence of dental caries and assess treatment needs of the orphans of Riyadh City, Saudi Arabia

This cross-sectional study included 238 orphaned children aged 6 to 18 years. Clinical examination was conducted by two doctors, and oral findings were recorded according to the World Health Organization (WHO) oral health assessment form (1997). The data collected was analyzed using SPSS 21.0.

Results of our study indicate that orphan children have low utilization of preventive and therapeutic oral health services. Urgent attention is required to plan a comprehensive dental health-care program to improve their oral health status.

Parents are the primary caretakers of a child. They take care of their children by protecting them from hazards and teach them honesty, courtesy, respect, generosity, and love. Unfortunately, there are many children underprivileged from their parents’ care either one of them or both of them. The United Nations International Children’s Fund and global part-

ners define an orphan as a child under 18 years of age who has lost one or both parents for any cause of death. By this definition, due to wars, natural disasters, infections, and other causes, there are nearly 140 million orphans living in the world today [1United Nations International Children’s Emergency Fund (UNICEF) (UNICEF): Orphans. 2019. Available from https://www.unicef.org /media/orphans, 2SOS Children’s Villages. Children’s Statistics Available from: https://www.sos-usa.org /our-impact/focus-areas/advocacy-movement-building/childrens-statistics] . According to the Ministry of Labor and Social Development in Saudi Arabia, in 2015, there were 1145 orphans in Riyadh, a region of Saudi Arabia [3Ministry of labor and social development. Available from:. https://mlsd.gov.sa /en/reports2003.].

The level of oral diseases in the community is influenced by the environment, individual’s lifestyles, behaviors, and socioeconomic factors [10Surgeon general's report on oral health in america. National institute of dental and craniofacial research Available from: https://www.nidcr.nih.gov /research/data-statistics/surgeon-general]. Despite improvements in oral health with newer technology and materials, the global problem persists. Oral disease is particularly more prevalent among underprivileged groups, and orphans are considered a high-risk group [11Orphans consider as high risk . Available from: https://www.sos childrensvillages.org/getmedia/384bc38a-62aa-4c2a-9563-a5ecc61b6a77/SOS-Child-at-risk-report-web.pdf, 12Al-Meedani LA, Al-Dlaigan YH. Prevalence of dental caries and associated social risk factors among preschool children in Riyadh, Saudi Arabia. Pak J Med Sci 2016; 32(2): 452-6.]. According to the Social Affairs Ministry of Saudi Arabia, there are 12,000 orphans among a population of 28 million [3Ministry of labor and social development. Available from:. https://mlsd.gov.sa /en/reports2003.]. The orphans represent 3% of the total population of children in Saudi Arabia. Although orphans contribute to 2% of the world’s population, studies regarding their oral health status are scarce. To the fullest of our knowledge, there has been no previous study addressing the issue of oral health of orphans in Riyadh, Saudi Arabia. This study aimed to assess the prevalence of dental caries in orphaned children in Riyadh, Saudi Arabia. Our study will provide insight regarding dental health in orphans, which is a significant issue, so that the government and the private sector can be aware of this issue and so that programs addressing this issue can be developed.

A descriptive cross-sectional study was conducted to assess the prevalence of dental caries and to assess the treatment need among orphans in Riyadh, Saudi Arabia. This study was approved by the ethical committee of Riyadh Elm University (IRB approval: FIRP/2018/156).Approval was taken from Insan Orphanages center (Fig. 1 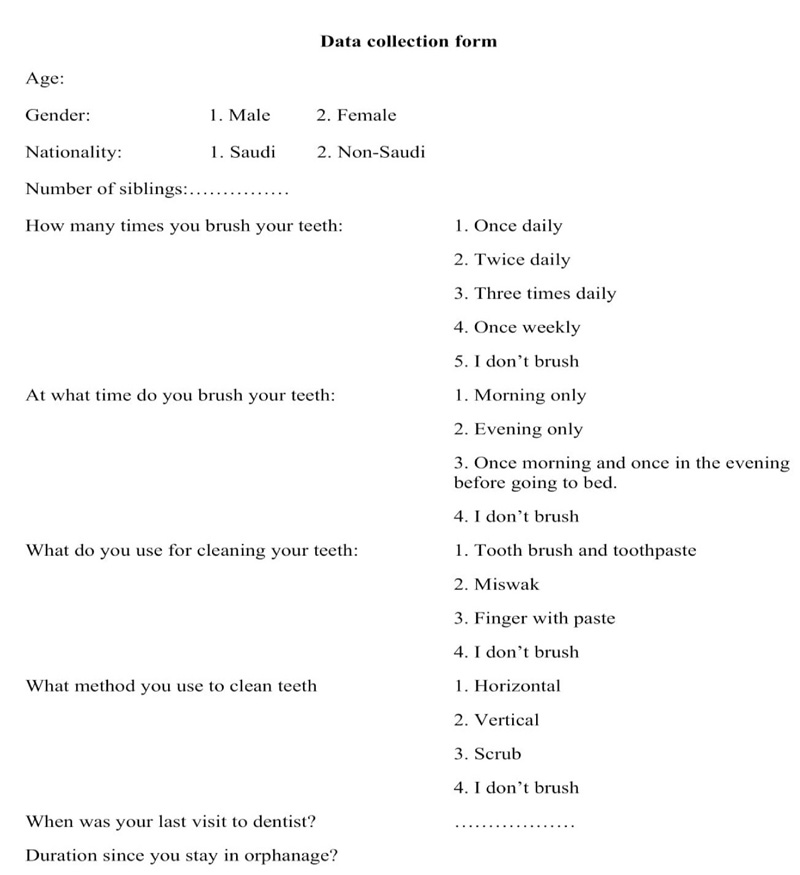 ). By considering the prevalence rate of dental caries to be 90%, the sample size required was 238 at 95% confidence level and 5% confidence interval. Participants were randomly selected and a total of 238 orphans were included, divided as 177 (74%) male orphans and 61(26%) female orphans. We included orphans aged 6 to 18 years and orphans who were willing to participate and cooperate. 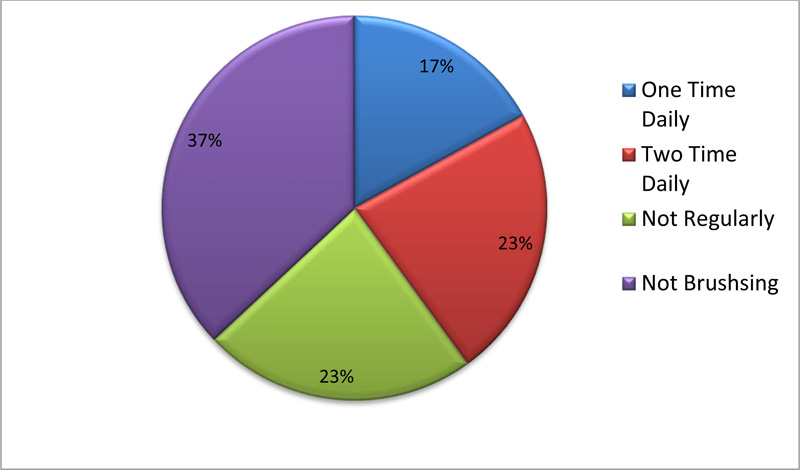 ). The respondents were asked questions on basic knowledge, such as frequency of brushing, technique of brushing, and methods and aid used for cleaning oral cavity. We added a question about the use of miswak as a method for taking care of oral health. Miswak is a traditional chewing stick prepared from the roots, twigs, or stem of Salvadora persica tree and has been used in the country as a natural method for tooth cleaning. A number of scientific studies have demonstrated that miswak (Salvadora persica) possesses antibacterial, anti-fungal, anti-viral, anti-cariogenic, and anti-plaque properties [15Haque MM, Alsareii SA. A review of the therapeutic effects of using miswak (Salvadora Persica) on oral health. Saudi Med J 2015; 36(5): 530-43.
[http://dx.doi.org/10.15537/smj.2015.5.10785] [PMID: 25935172] ]. The Simplified Oral Hygiene Index (OHI-S) by Greene and Vermillion [16Green JG, Vermillion JR, Di Nicoló R, et al. The simplified oral hygiene index. J Am Dent Assoc 1964 Jan; 68(1): 7-13.
[http://dx.doi.org/10.14219/jada.archive.1964.0034] ] was used and included a debris index, calculus index, plaque index, and gingival index. Each of these indexes is based on numerical determinations representing the amount of debris or calculus found on the preselected tooth surfaces. The examination was performed by using the Disposable Examination Kit.

The data were analyzed using SPSS version 21. Mean and standard deviations were calculated to express the mean Decayed Missing Filled Surface DMFS values. The chi-squared test was used to assess associations between treatment needs and various risk factors including lifestyle and social support, oral hygiene practice, utilization of a toothbrush, a toothpaste, and dental floss, and frequency of visits to dentists. Specific statistical testswere used including (Spearman’s rho, Mann-Whitney U) .A p < 0.05 was considered statistically significant. 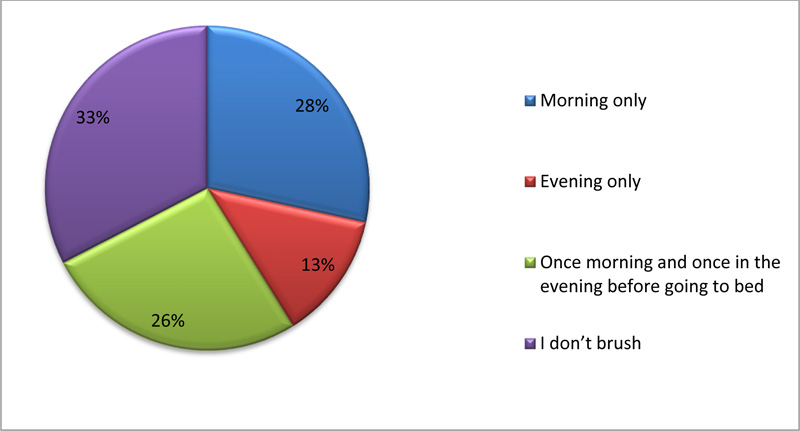 ), which indicate that the participants were highly susceptible to dental caries. 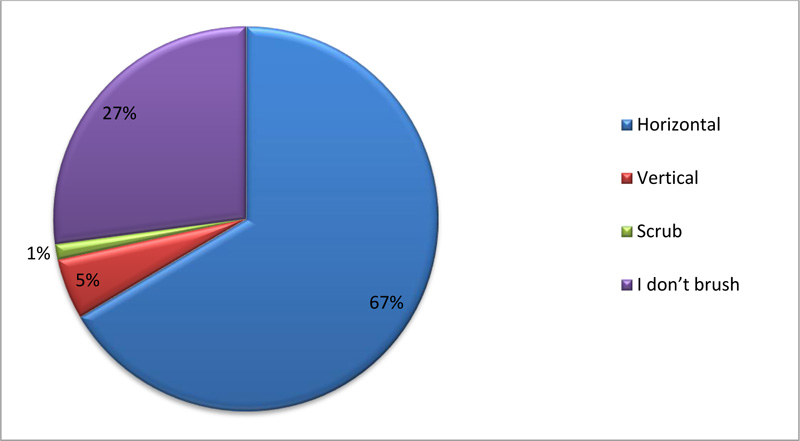 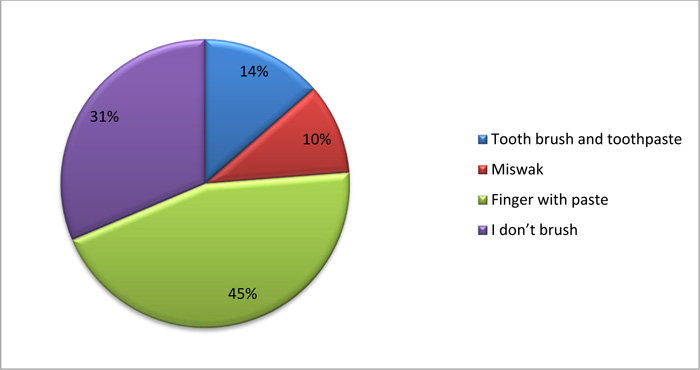 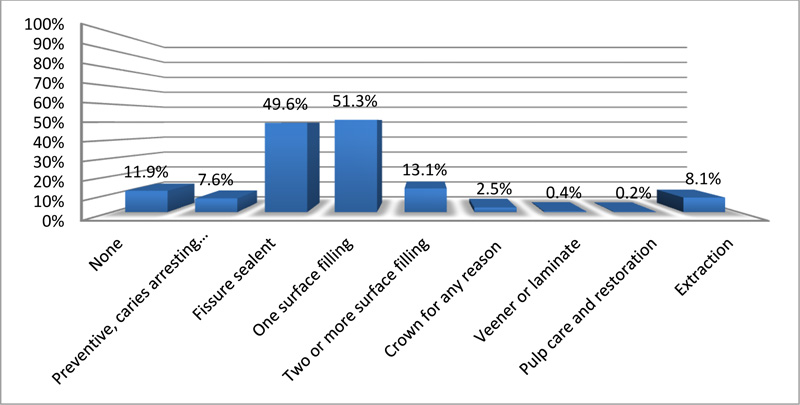 Nowadays,, parents face many difficulties in controlling their children from consuming candies and beverages that effect their oral health. In contrast for those whose don’t have their parents with them, there is no one to make sure of children’s oral health, resulting in increased consumption of candies and beverages which cause more caries as reported in a study by Caneppele TM, Jeronymo RD [17Caneppele TMF, Jeronymo RDI, Di Nicoló R, et al. Di Nicoló, Rebeca, Araújo, Maria Amélia Máximo de, & Soares, Luís Eduardo Silva. In Vitro assessment of dentin erosion after immersion in acidic beverages: surface profile analysis and energy-dispersive X-ray fluorescence spectrometry study Brazilian Dental Journal 2012; 23(4): 373-8.
[http://dx.doi.org/10.14219/jada.archive.1964.0034] ] , in their study that done on one hundred standardized dentin slabs obtained from bovine incisor roots which study effect beverage on teeth, result shows increase of erosion on roots dentin which mean more caries which show why we have high consideration about consumption of beverages, candies, sweet etc.

The mean record of DMFS was 8.40±4.19.Previously, Alsadhan [18Al-Jobair AM, Al-Sadhan SA, Al-Faifi AA, Andijani RI, Al-Motlag SK. Medical and dental health status of orphan children in central Saudi Arabia. Saudi Med J 2013; 34(5): 531-6.
[PMID: 23677271] ,19Alsadhan S. Dental caries prevalence among 12-14 year-old schoolchildren in Riyadh: A 14 year follow-up study of the Oral Health Survey of Saudi Arabia Phase I. Saudi Dent J 2006; 2006: 18.] reported that the DMFS value ofmale schoolchildren aged 12-14 years was 7.20 ± 3.89. Our results showed that the DMFS value of male orphans was 8.04±4.44 which is higher than the that shown in Alsadhan study which seems realistic due to loss of their parents. The caries prevalence in our study participants was 96.6%, which is higher when compared to a previous study conducted by Aldosari [20AlDosari A M, Wyne A H, Akpata ES, Khan N B. Caries prevalence and its relation to water fluoride levels among schoolchildren in Central Province of Saudi Arabia
[http://dx.doi.org/10.1111/j.1875-595X.2004.tb00299.x] ], which reported that caries prevalence among intermediate schoolchildren was 92.3%.

The majority of the participants needed preventive care followed by fissure sealant, one surface filling, two surface filling, pulp therapy, malocclusion correction, and extractions. Out of 238 participants, only 3.4% showed good oral health care. These figures were compared with a study by Khare et al. [22Khare V, Koshy A, Rani P, Srilatha S, Kapse S, Agrawal A. Prevalence of dental caries and treatment needs among the orphan children and adolescents of Udaipur district, Rajasthan, India J Contemp Dent Pract 2012; 1;13(2): 182-7.], where 26.2% of the participants required one surface filling which was lower than our study being 51.3%.18.3% required two or more surface fillings which was higher than the result achieved in our study being 13.1%.8.1% of the partipants in our study had teeth requiring extraction,compared to 5.2% reported in the study by Khare et al study. Finally, acidic environment that result from eating high sugar content food and drinks that mainly found in sweets, beverages, etc. can effect even restoration, study done by poggio, violo, mirando [23Poggio C, Viola M, Mirando M, Chiesa M, Beltrami R, Colombo M. Microhardness of different esthetic restorative materials: Evaluation and comparison after exposure to acidic drink. Dent Res J (Isfahan) 2018; 15(3): 166-72.
[http://dx.doi.org/10.4103/1735-3327.231863] [PMID: 29922334] ] focused on effect of beverage on some types of restoration, in their study they used thirty specimens of each esthetic restorative material., their results shows the effect of acidic environment on restorations (Needs to be rephrased).

In our research, there are limitations; firstthe data collected for habits and practices may be limited. Secondly, there were some difficulties faced in achieving a balance between the number of male and female orphans due to refusal from some females to participate which influenced the result of the research. Third, the data on oral health knowledge, attitudes, and practices of orphan children with regard to consumption of sugary foods and drinks are very scarce. Due to this fact, and a comparison with a non-orphan population consider one of the limitation in our study, this research can used as reference in future researches.

Death or absence of one or both parents can lead to bad oral health of children. Thus, orphaned children are vulnerable and are potentially at an increased risk for poor health. This study shows that there is a great need for implementing preventive measures among orphaned children living under special circumstances. This research is the first study of its kind conducted in Saudi Arabia and there were no prior study conducted in Saudi Arabia. It has been observed that the oral health of orphans was poor and this community has low utilization of preventive or therapeutic oral health services. Prevention programs targeting dental caries such as sealant programs and fluoride programs should be started soon as possible for this population. In the future, orphans should be considered a priority group when formulating plans for oral health care.

TO and BS and AS performed the examination on the children, KA and did the research design, AA and made the structured questionnaire construction in English and translated to Arabic. RD performed the data analysis, AA and TO were major contributors in writing the manuscript. All authors read and approved on the final manuscript

No animals were used in this study. All humans research procedures followed were in accordance with the guidelines of the Declaration of Helsinki of 1975, as revised in 2008.

Informed consent approval letter was given by Ensan, the Charity Committee for Orphans Care

AVAILABILITY OF DATA AND MATERIAL

The data that support the findings of this study are available from the corresponding author, [A.A], upon reasonable request.

We would like to thank all the head of Ensan the Charity Committee for Orphans Care, caretakers of orphanages and all the children who participated in the study. for their cooperation.