The study aimed to investigate the surface chemistry and topography of commercially available laser-modified titanium implants, together with evaluating the cell morphology and cell adhesion of human fetal osteoblast (hFOB) seeded onto the same implants.

Six (6) samples of commercially available laser-modified titanium implants were investigated. These implants were manufactured by two different companies. Three (3) implants were made from commercially pure grade 4 Titanium (Brand X); and three were made from grade 5 Ti6Al4V (Brand Y). The surface topography of these implants was analyzed by scanning electron microscope (SEM) and the surface chemistry was evaluated with electron dispersive x-ray spectroscopy(EDS). Human fetal osteoblasts were seeded onto the implant fixtures to investigate the biocompatibility and adhesion.

Brand X displayed dark areas under SEM while it was rarely found on brand Y. These dark areas were consistent with their organic matter. The hFOB cell experiments revealed cell adhesion with filopodia on Brand X samples which is consistent with cell maturation. The cells on Brand Y were morphologically round and lacked projections, one sample was devoid of any noticeable cells under SEM. Cell adhesion was observed early at 48 hrs in laser-irradiated titanium fixtures from both the brands.

The presence of organic impurities in Brand X should not be overlooked because disruption of the osseointegration process may occur due to the rejection of the biomaterial in an in-vivo model. Nevertheless, there was insufficient evidence to link implant failure directly with carbon contaminated implant surfaces. Further studies to determine the toxicity of Vanadium from Ti6Al4V in an in-vivo environment should indicate the reason for different cell maturation.

The success of dental implants hinges on an integral phenomenon where direct contact between bone and an implanted biomaterial occurs, this event is termed as osseointe gration. The current consensus supports the use of titanium implants with rough surfaces for more predictable peri-implant bone adhesion [1Wennerberg A, Albrektsson T. On implant surfaces: a review of current knowledge and opinions. Int J Oral Maxillofac Implants 2010; 25(1): 63-74.
[PMID: 20209188] ]. With this knowledge, dental implant manufacturers either use subtractive and/or additive methods to optimize the surface characteristics of titanium implants. Subtractive methods include machining, anodization, Sandblasted Large grit acid etching (SLA) and laser irradiation. Additive methods involve coating the surface of the implant with materials such as titanium plasma, hydroxyapatite, calcium phosphate or bone morphogenic protein. Apart from laser irradiation, all of the above-mentioned surface modification methods could potentially introduce foreign elements to the implant surface during the manufacturing process. Laser irradiation is a clean and economical option because the lack of direct contact with the titanium fixture during the surface modifying process could ensure a contaminant-free product [2Tavares HS, Faeda R, Carlos G, Guastaldi FPS, Oliveira N. J Osseointegration 2009; 1: 25-31.].

Due to the lack of information regarding commercially available LM titanium implants and the reaction of hFOB to LM titanium surfaces, the aims of this study were to:

All the samples were in sterilized packages and opened only during sample analysis. To examine the surface morphology and chemistry of the implants, a scanning electron microscope with EDS (JSM 5410LV, JEOL, Tokyo, Japan) was used. Three (3) samples from each brand were analyzed under SEM and EDS. The visualization of the surface was performed at three sections, coronal, middle and apical sections in each one of the implants. The samples were placed on carbon discs for fixation and then inside the microscope chamber under vacuum conditions. EDS was used for qualitative and quantitative elemental analysis, and random spots were selected and analyzed.

All implants were cleaned and degreased with ethanol at different concentrations and sterilized in an autoclave at 134°C for 15 min. Each implant was then placed horizontally in a 6-well culture plate. The cells were seeded at a density of 100,000 cells per implant using a micropipette. After 48 hrs, the implants were removed from incubation and fixed with cold 4% glutaraldehyde in Dulbecco’s phosphate-buffered saline (DPBS) for 2 days. Then, implants were dehydrated in different concentrations of ethanol and were coated with gold for SEM analysis.

) under SEM, which appeared to be indicative of organic elements. Carbon appears darker than titanium in the material viewed by the contrast image because carbon atoms have fewer electrons.


At x5000, the typical morphology of lasered surfaces is clear; the spherical structures with microcracks were the result of rapid melting (Fig. 2

) and cooling of the metal immediately after laser. EDS results displayed oxygen, titanium and small amounts of carbon in all 3 samples (Fig. 3

). The presence of carbon is consistent with the dark areas.

All brand Y samples were relatively clean and displayed no distinct dark areas under SEM (Fig. 4 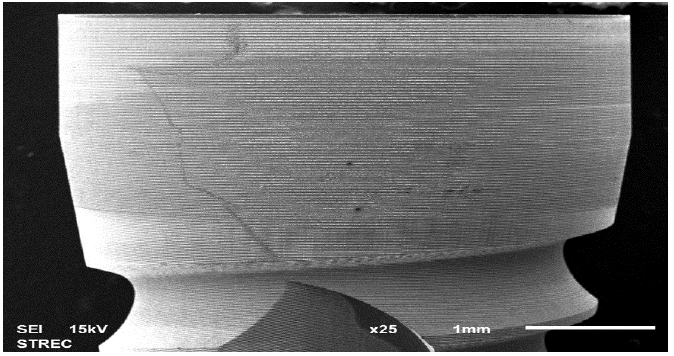 ). This could be indicative of a cleaner packaging process post-laser-irradiation. At x2000, symmetrical rods and spheres could be visualized (Fig. 5

). EDS results showed oxygen, titanium, aluminum and vanadium with a small amount of carbon in all 3 samples of brand Y (Fig. 6 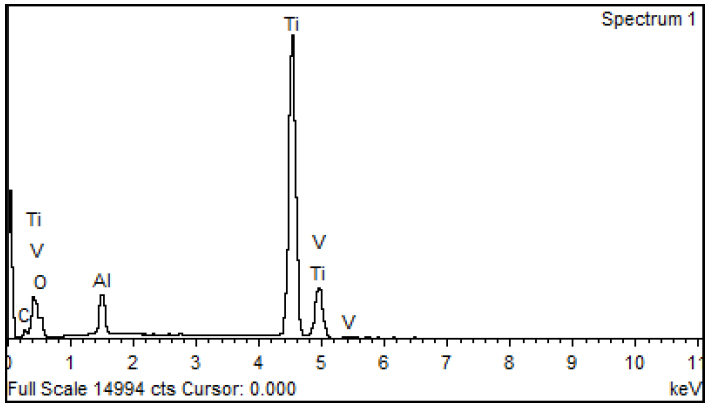 ). The EDS results clearly showed the presence of vanadium ions which have been postulated to be non-biocompatible. The chemical composition (atomic %) of 2 brand samples is demonstrated in Table 1 (Mean ± SD).

This experiment was a descriptive analysis with the help of images. After 48 hrs, all 6 samples were visualized under SEM; a startling finding was the lack of mature cells on brand Y surfaces. One sample of brand Y displayed zero cell adherence, while the other 2 brand Y samples displayed cells that were rounded and had short processes (Figs. 7a 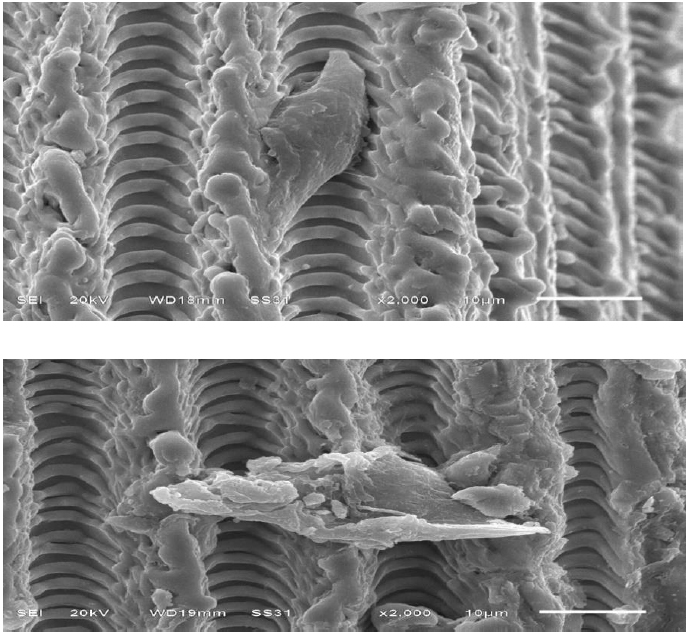 ). The short processes of osteoblast cells displayed lack of maturation at 48 hrs. Although brand Y samples were free of contaminants, the overall lack of mature cell adhesion after 48hrs could indicate the need for a longer duration for cells to mature on titanium alloys. The presence of impurities in the form of organic debris on brand X surfaces showed no impact on cell adhesion experiments. Brand X implant samples displayed good cell maturation with filopodia (Fig. 8 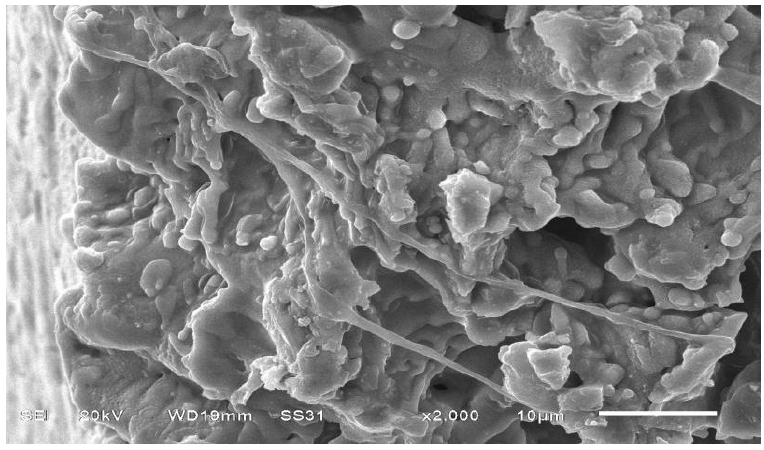 ). The filopodia show a single osteoblast cell maturing and attachment of its arms to further sites on the implants and cell attachment with filopodia in different directions, even in the presence of darker areas, which are probably organic debris (Fig. 9 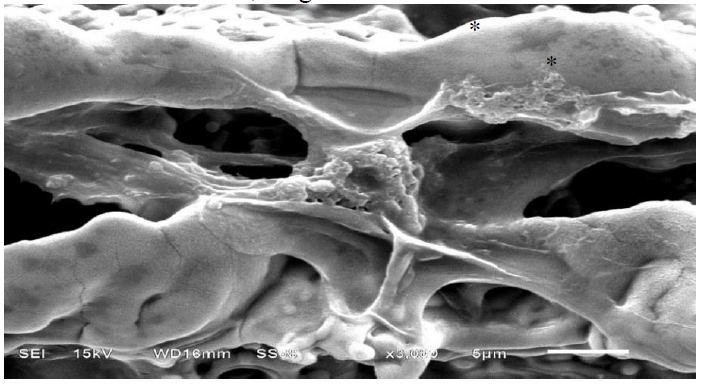 Osseointegration is regarded as an essential indicator of success in oral rehabilitation with dental implants. Osseointegration is a dynamic process that involves multivariate factors that determine the direct union of bone with a biomaterial without concomitant unfavorable events such as marginal bone loss or peri-implantitis. Therefore, titanium should not be considered inert when used as an implant material, instead in an ideal scenario, after insertion into bone, it triggers a foreign body reaction which causes mild chronic inflammation, that is resolved with time by the formation of a dense bone, engulfing the implant (osseointegration) [13Albrektsson T, Dahlin C, Jemt T, Sennerby L, Turri A, Wennerberg A. Is marginal bone loss around oral implants the result of a provoked foreign body reaction? Clin Implant Dent Relat Res 2014; 16(2): 155-65.
[http://dx.doi.org/10.1111/cid.12142] [PMID: 24004092] ]. With this in mind, we can hypothesize that the introduction of additional foreign elements, whether organic or inorganic could disrupt the foreign body equilibrium, thereby, inducing more osteoclastic activity with minimal osteoblasts during bone remodeling.


The impurities on the surface of titanium implants could occur due to residual elements generated by the surface alteration process [10Wang M, Chen T, Lu S, et al. Osteogenic Comparison on Selective Laser Melting Printed and Sandblasting-Acid-Etching Ti Substrates for Customized Implant Applications. Sci AdvMate 2017; 9: 1947-2935.
[http://dx.doi.org/10.1166/sam.2017.3012] ] or organic contamination from the packaging of dental implants [11Duddeck D, Maghaireh H, Faber FJ, Neugebauer J. SEM surface analyses of 120 sterile-packed implants. Clin Implant Dent Relat Res 2014; 16(6): 817-26.
[PMID: 23527899] ]. These contaminants could disrupt the healing of the implant to bone interface, thus delaying osseointegration or causing early marginal bone loss. Therefore, quality control during the manufacturing and packaging of commercially available dental implants should be monitored carefully. Brand X samples in our study displayed dark areas under SEM which is indicative of organic impurities. A likely source of the organic debris found on brand X implants could be from the contact of the implant surface with plastic elements during the packaging process. Although the organic matter on the implant surface did not hinder cell adhesion in this study, the in-vitro state of the cells here does not represent the actual process of healing following implantation of a biomaterial. The in-vitro environment discounts the presence of inflammatory and immunomodulatory events.

In this experiment, the 48 hrs incubation period post-seeding of hFOB onto the implants produced good adhesion and cell maturation on brand X implant samples. A longer incubation period could have produced better cell adhesion or cell maturation on brand Y samples. Longer hFOB incubation periods (7days and 15days) with lasered zirconia implants were reported to produce cells with filopodia after 7days, while intercellular contacts, which converged into a single layer that adhered onto the surface of the implants, were observed after 15 days [16Delgado-Ruíz RA, Gomez Moreno G, Aguilar-Salvatierra A, Markovic A, Mate-Sánchez JE, Calvo-Guirado JL. Human fetal osteoblast behavior on zirconia dental implants and zirconia disks with microstructured surfaces. An experimental in vitro study Clin Oral Implants Res 2016; 27(11): e144-53.
[http://dx.doi.org/10.1111/clr.12585] [PMID: 25809053] ].

Another potential reason for the lack of mature attachment could be simply due to the perceived shallower depth between each groove on the brand Y implants. This highlights a limitation of this research because a quantitative value of the roughness of each implant was not assessed. The use of a confocal microscope or digital profilometer could give a quantitative value of the micro-roughness average of each implant.

Laser-modified titanium implants have the potential for increasing the chances of successful osseointegration. The brand X implant samples that displayed human fetal osteoblast with filopodia infer the possibility of successful osseointegration. Although, the results in our study showed that cell adhesion is possible after 48 hrs in laser-modified titanium, there are some limitations such as the low sample size and lack of statistical analysis to make a definitive conclusion. Additionally, the main reason for the lack of cell maturity and cell adhesion in brand Y samples remains unanswerable, further studies to determine the toxicity of vanadium from Ti6Al4V in an in-vivo environment and titanium alloys lasered to a similar roughness of brand X should indicate the reason for the disparity between the two implant brands. The presence of organic impurities in brand X samples should not be overlooked despite good cell adhesion results. Impurities on the surface of titanium implants could potentially be hazardous in an in-vivo model resulting in the disruption of the osseointegration process by the rejection of the biomaterial. Nonetheless, there is currently insufficient evidence to link implant failure directly to carbon contaminated implant surfaces.

ETHICS APPROVAL AND CONSENT TO PARTI-CIPATE

The data that support the findings of this study are available from the corresponding author, [DS], upon reasonable request.