Predictive Role of p53 Protein as a Single Marker or Associated with ki67 Antigen in Oral Leukoplakia: A Retrospective Longitudinal Study

Oral leukoplakia (OL) is the most common potentially malignant lesion of the oral cavity. Immunohistochemical analysis of p53 and Ki67 proteins is a simple and inexpensive method widely used in non-dysplastic OLs to reveal lesions predicted to develop oral cancer. The present longitudinal study evaluated the predictive role of p53 and Ki67 proteins alone or in combination in a group of OLs without dysplasia followed for many years. Seventy-seven OL patients referred to our Department between January 2006 and October 2013 underwent histochemical analysis of p53 and Ki67 expression. OLs were considered at high risk in the presence of either high p53 expression (>20%), or low/normal p53 expression associated with high Ki67 expression (Ki67/p53 ratio >3). Seven OLs evolved to OSCC during the follow-up period. Three cases had p53 overexpression, while four had a high Ki67/p53 ratio. Statistical significance was reached when samples with p53 overexpression were combined with samples with high Ki67/p53 ratio (Chi square 5.3; p<0.02). The combined immunohistochemical expression of p53 and Ki67 proteins could be a useful and simple molecular marker for early detection of non-dysplastic OLs at risk of developing oral cancer.

Head and Neck cancer is the sixth leading cancer worldwide, with more than 500,000 cases diagnosed every year. The vast majority of head and neck cancers are oral squamous cell carcinomas (OSCCs) that arise from the epithelial lining of the oral cavity, including the tongue and lips [1Ferlay J, Shin HR, Bray F, Forman D, Mathers C, Parkin DM. Estimates of worldwide burden of cancer in 2008: GLOBOCAN 2008. Int J Cancer 2010; 127: 2893-917.].

In a previous cross-sectional study, we found that “normal” or reduced p53 expression, when combined with high Ki67 protein expression as an immunohistochemical marker of proliferating cells, demonstrated a higher predictive power than when taken alone [14Montebugnoli L, Felicetti L, Gissi DB , et al. Predictive Role of p53 Protein as a Single Marker or Associated to Ki67 Antigen in Oral Carcinogenesis. Open Dent J 2008; 2: 24-9.]. The rationale was that normal cells undergoing increased proliferation due to factors such inflammation, trauma, etc. usually accumulate p53 protein that is considered a physiologic response safeguarding epithelial growth. It follows that the finding of high Ki67 values associated with normal or low p53 values (high Ki67/p53 ratio) may suggest an impaired p53 production as a consequence of TP53 gene damage. The results of that study showed that samples with high p53 scores considered together with samples with normal p53 but elevated Ki67/p53 (increased mitotic/apoptosis ratio) included 93% of OSCC and 81% of OLs with moderate or severe dysplasia.

The aim of the present longitudinal study was to follow a population of patients with an initial diagnosis of OL without signs of dysplasia to determine whether p53 alone or combined with Ki67 could have a predictive power to detect non-dysplastic OLs that developed to OSCC.

The study cohort comprised 77 OL patients referred to the Department of Biomedical and Neuromotor Sciences, Section of Oral Sciences, University of Bologna, Bologna (Italy) between January 2006 and October 2013. Of the 77 patients, 34 were males and 43 females aged 26-95 years mean 61.6 ± 13.8. Eight OLs were on the cheek, five on the tongue, 19 in the gum, three on the hard palate, and one on the lip. Sixty OLs appeared as white homogeneous lesions, while 17 OLs were white or white/red inhomogeneous lesions. All samples underwent histological and immunohistochemical analysis and a minimum follow-up of 12 months was available.

Immunostaining was performed on 2 µm thick sections serially cut from the selected blocks. The following antibodies were employed: monoclonal anti-Ki67 (Dako, Denmark, clone MB-1 diluted 1:200) and monoclonal anti-p53 (Dako, clone p53, diluted 1:50). Processing was performed in an automatic stainer (Autostainer, Ventana, USA). All the cases contained an internal control as basal cells of the oral epithelium show nuclear positivity for the two markers under study. Negative controls consisted in omitting the primary antibody. Counting the percentage of positive nuclei in 400 consecutive epithelial cells of selected areas representative of the lesion gave a semi quantitative evaluation of the immunohistochemical results.

Patients’ age, sex, smoking behavior, site, clinical appearance, p53 overexpression, and high Ki67/p53 ratio were analyzed for their relationship with risk of progression to OSCC during follow-up. The Cox proportional hazards method with forward selection was used as multivariate survival analysis. Time was defined as the period between diagnosis and the target event or last follow-up. P values <.05 were considered statistically significant in all analyses.

Features of the study population.

) shows a 77-year-old non-smoking female who initially presented a non-homogeneous leukoplakia of the marginal tongue without signs of dysplasia but with high p53 expression (50%) at immunohistochemical analysis; 36 months later she developed OSCC.

The results of the Cox proportional hazards method showed that the only significance was reached when samples with p53 overexpression were combined with samples with a high Ki67/p53 ratio (Chi square 5.3; p<0.02) (Fig. 4 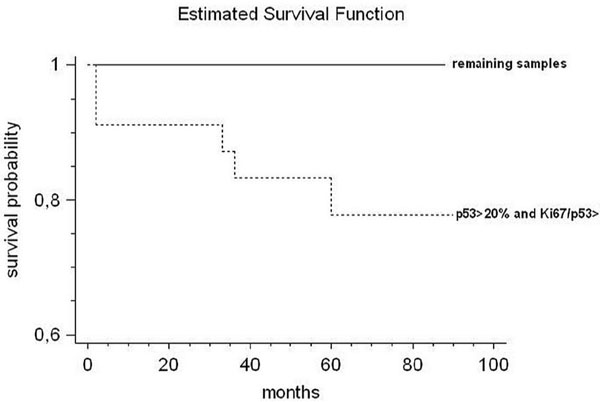 Visioli et al. analyzed p53 and p21 protein expression in non-dysplastic leukoplakias with different epithelial alterations (acanthosis, hyperkeratosis and acanthosis combined with hyperkeratosis), and in dysplastic leukoplakias. The results showed high p53 expression in both groups without any significant between groups difference [31Visioli F, Lauxen IS, Filho SM, Rados PV. Expression of the cell cycle regulation proteins p53 and p21WAF1 in different types of non-dysplastic leukoplakias. J Appl Oral Sci 2012; 20: 369-75.]. They concluded that all OLs must be considered potentially malignant disorders irrespective of the presence or not of dysplasia, and patients should be kept under regular long-term clinical follow-up.

In the present longitudinal study, three out of seven OLs that evolved to OSCC showed high p53 values at the first examination, although 16 OLs with p53 overexpression did not progress to OSCC and four OLs with “normal” p53 expression did evolve to OSCC. These data do not allow p53 overexpression alone to be taken as a variable statistically associated with OSCC progression, at least in a small sample

In conclusion, our results suggest that OLs may be considered potentially malignant lesions even in the absence of histological dysplasia. Overexpression of p53 protein alone did not identify all OLs that subsequently developed to OSCC, whereas the combination of p53 and Ki67 expression did. The combined immunohistochemical expression of p53 and Ki67 proteins could represent a simple and inexpensive molecular marker for early detection of potentially malignant lesions at risk of developing OSCC. These data need to be confirmed in future studies with a longer follow-up involving a larger number of patients with non-dysplastic OLs.

The authors declare no financial support or commercial association, current and within the past five years, that might pose a potential, perceived, or real conflict of interest.