In periodontal regenerative therapy, stable periodontal attachment, including cementum and Sharpey’s fibers, should be a guide for reforming the instrumented root surface. However, it is difficult to achieve these objectives due to rapid junctional epithelium downgrowth, which prevents the formation of periodontal attachment [1Listgarten MA. Electron microscopic features of the newly formed epithelial attachment after gingival surgery. J Perio-dont Res 1967; 2: 46.]. Even if epithelial tissue does not invade the root surface after healing, many cases show gingival tissue adaptation without periodontal attachment apparatus [2Nyman S, Karring T, Lindhe J, Plantén S. Healing following implantation of periodontitis-affected roots into gingival con-nective tissue. J Clin Periodontol 1980; 7: 394-401.]. Therefore, compatibility between the root surface and regenerated periodontal tissue is required for a predictable regenerative procedure.

Collagen hydrogel was prepared from atelocollagen derived from calf skin dermis (Koken, Tokyo, Japan). Atelocollagen solution was stirred with 1 M HCl and stored at 10°C for 3 days. Subsequently, 1 mM L(+)-ascorbic acid and 0.1 mM CuCl2 were added to this solution, which was then adjusted to a final concentration of 1.5% to prepare collagen hydrogel (Fig. 1A 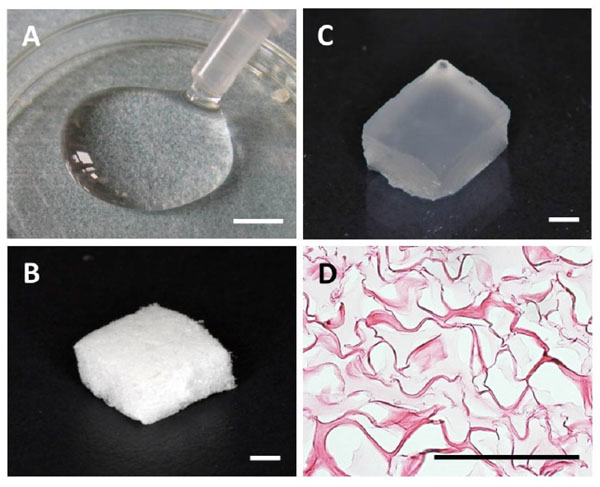 
Collagen sponge was provided by Olympus Terumo Biomaterials (Tokyo, Japan). Collagen sponge was prepared as follows. Atelocollagen in a dilute HCl solution was neutralized by adding concentrated phosphate buffer in NaCl to a final concentration of 0.1% collagen, 30 mM Na2HPO4 and 0.1 M NaCl. This collagen solution was incubated at 37°C for 4 hours. The resulting fibrous precipitate was referred to as fibrillar collagen (FC). Heat-denatured collagen (HAC) was prepared from atelocollagen in a dilute HCl solution by heating at 60°C for 30 minutes. A composite of FC and HAC was prepared by mixing the two at a ratio of 9:1 (w/w), respectively. This composite material was adjusted to a final concentration of 4% and made into the form of a sponge by lyophilization at -30°C. This sponge was dehydrothermally cross-linked at 110°C for 2 hours and used as a collagen sponge. In this study, 36 pieces of collagen sponge (5 ( 3 ( 3 mm) were used (Fig. 1B

). For morphological analysis, collagen hydrogel scaffold was fixed in 10% buffered formalin and embedded in paraffin. Sections (6 μm) were prepared, stained with hematoxylin and eosin (HE) and examined by light microscopy.

Mandibular first and third premolars were extracted before experimental surgery, and extraction sites were allowed to heal for 8 weeks. Following reflection of the buccal and lingual muco-gingival flaps with partial thickness, periosteum was removed from alveolar bone. Thirty-six one-wall infrabony defects (depth: 5 mm; width: 3 mm) were surgically created in the mesial and distal aspects of the mandibular second premolars, and the mesial aspect of the mandibular fourth premolars (Fig. 2A 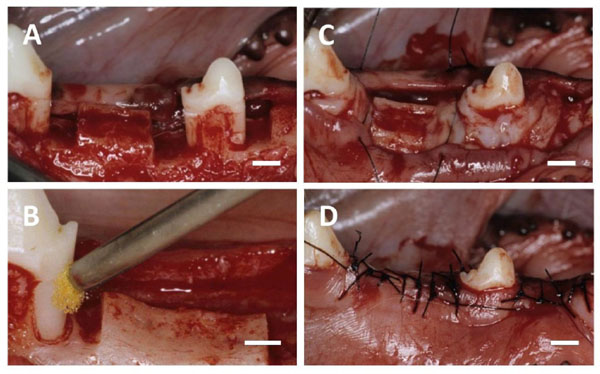 ). The root surface facing the defect was planed to remove cementum. Reference notches indicating the cemento-enamel junction and bottom of the defect were prepared on root surfaces. The denuded root surface was demineralized with 24% EDTA (pH 7.0) for 3 minutes and washed with saline. Subsequently, defects were randomly assigned to four groups. In the BMP/Col group, 25 μl of recombinant human BMP-2 solution (loading dose; 1 µg/µl) was applied to the root surface (Fig. 2B

), and the defect was filled with collagen hydrogel scaffold (Fig. 2C

). In the BMP or Col group, BMP-2 coating was performed or the defect was filled with collagen hydrogel scaffold. In the control, neither conditioning nor implantation was performed. The flap was repositioned and securely sutured (Surgilon; Tyco Healthcare Japan, Tokyo, Japan; Fig. 2D

Animals were euthanized using an overdose of sodium pentobarbital (0.5 ml/kg, Somnopentyl, Kyoritsu, Tokyo, Japan) following general anesthesia with medetomidine hydrochloride and butorphanol tartrate. Specimens were collected from the wound at 4 weeks post-surgery. Tissue blocks, including teeth, bone and soft tissue, were fixed in 10% buffered formalin, decalcified in 10% formic-citric acid, and embedded along the mesial-distal plane in paraffin wax. Sections (6 μm thick) were serially prepared and stained with hematoxylin-eosin (HE) and Masson’s trichrome.

Three stained sections were taken; one was approximately from the center of the root, and the other two were 180 µm from either side of the center. The following nine histomorphometric measurements (Fig. 3 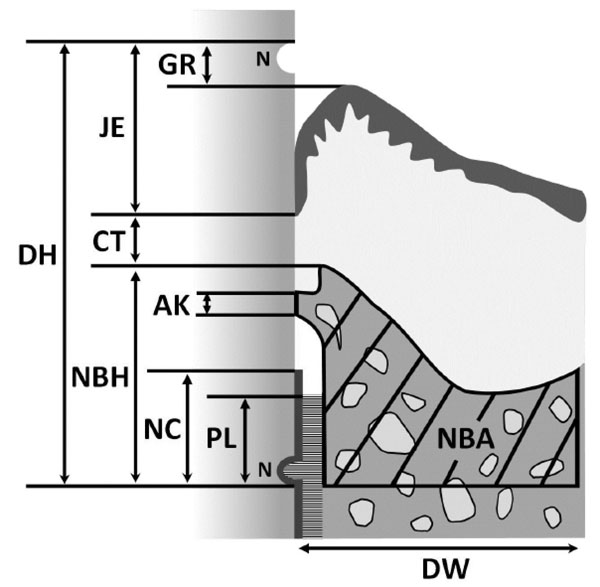 1. Defect height: distance between the apical notch and the cemento-enamel junction.

2. Defect width: length of the bottom of the osseous defect.

3. New cementum: distance between the apical notch and the coronal extension of the newly formed cementum-like tissue on the root surface.

We also counted the frequency of ankylosis, epithelium downgrowth and gingival recession in each group.

The means and standard deviations of each parameter were calculated for four groups. Differences between the groups were analyzed using Scheffé test. P-values ( 0.05 were considered to be statistically significant. All statistical procedures were performed using a software package (DR.SPSS 11.0; SPSS Japan, Tokyo, Japan).

On microscopy, collagen hydrogel was present as an amorphous structure and had fully penetrated into the collagen sponge (Fig. 1D

Due to pulp tissue exposure during the creation of bone defects in the surgical procedure, two specimens were excluded from this study. Otherwise, postoperative healing was uneventful in all dogs. 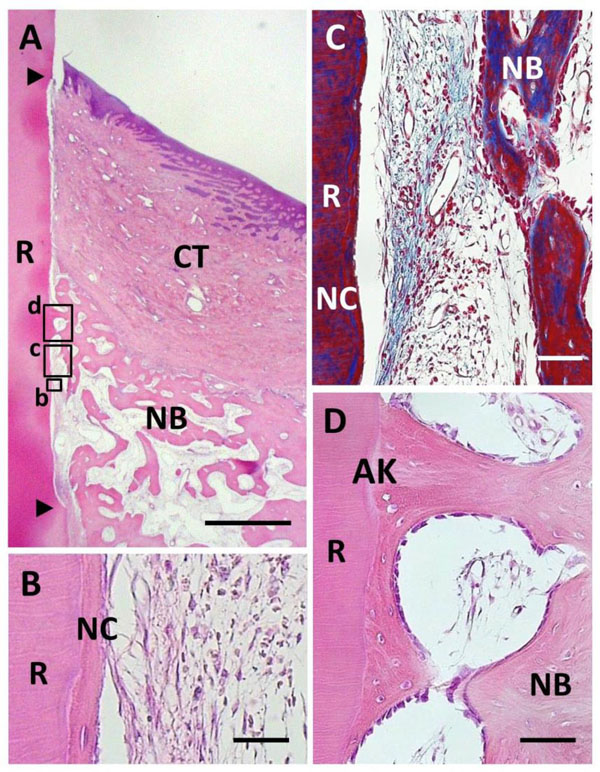 ). Cementum-like tissue was covered with cementoblastic cells; however, Sharpey’s fibers associated with periodontal ligament formation were not observed. In addition, cells and extracellular matrix were poorly distributed in the interface between new alveolar bone and cementum-like tissue. Masson’s staining clearly indicated the lack of fibrous tissue along the root surface (Fig. 4C

Following collagen hydrogel application, periodontal healing was observed; however, there were some differences between the Col and BMP groups (Fig. 5A 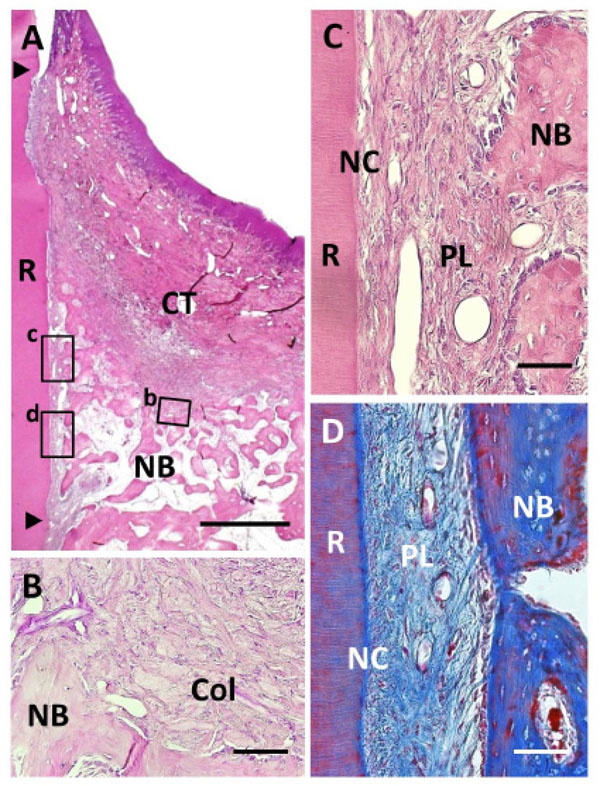 ). In contrast to the BMP group, cementum-like tissue appeared as a thin layer and with an unclear cement line. Periodontal ligaments were reformed and well-stained as the collagen-rich layer (Fig. 5D

). Sharpey’s fibers inserting into both the new cementum-like tissue and alveolar bone were observed, indicating that functionally oriented periodontal ligament tissue was reestablished. Ankylosis was rarely observed when compared to the BMP group. In the coronal portion, gingival connective tissue attached to the root surface. Some residual collagen hydrogel scaffold was observed around the new alveolar bone, fractionated by newly formed connective tissue (Fig. 5B

). As a result, fibroblastic and osteoblastic cells had proliferated on the inner side of the collagen hydrogel material. Few inflammatory cells were also seen around the residual collagen scaffold. Gingival recession was mild, similar to that of the BMP group. 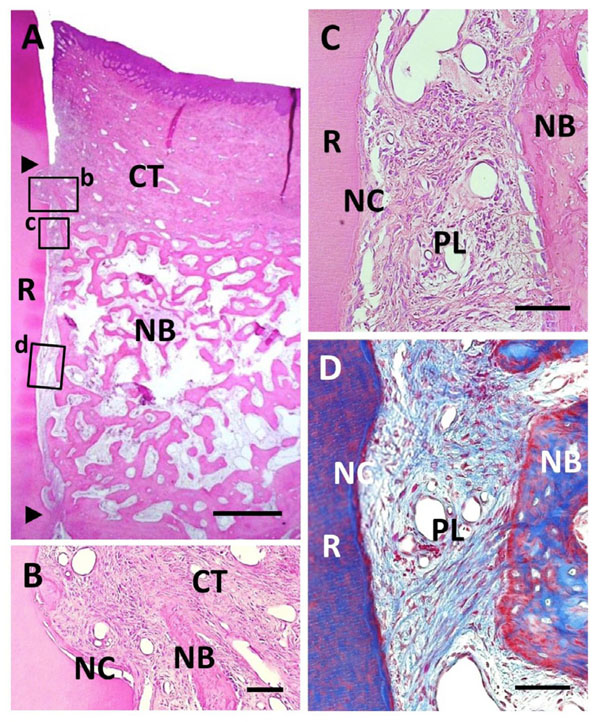 ). Considerable new alveolar bone occupied the periodontal defect space. New bone was composed of narrow trabeculae including osteoblasts and osteocytes. Thick, cellular cementum-like tissue was frequently evident on the BMP-applied root surface, even in the coronal portion (Fig. 6B

). Cementum-like tissue was lined with cementoblastic cells and showed Sharpey’s fiber insertion. Despite BMP loading, fiber-rich periodontal ligaments were reestablished, in contrast to specimens in the BMP group (Fig. 6C

marked alveolar bone formation was observed along the BMP-modified root surface, ankylosis was reduced when compared with the BMP group. Residual collagen hydrogel scaffolds were rarely seen in the defect, suggesting that the scaffold exhibited high degradability. Regulation of epithelial downgrowth and gingival recession was favorable.

Bioactivity for reconstruction of periodontal attachment was not stimulated in control specimens. Newly formed connective tissues composed of infiltrating fibroblastic cells and blood vessels filled the defect in most areas (Fig. 7A 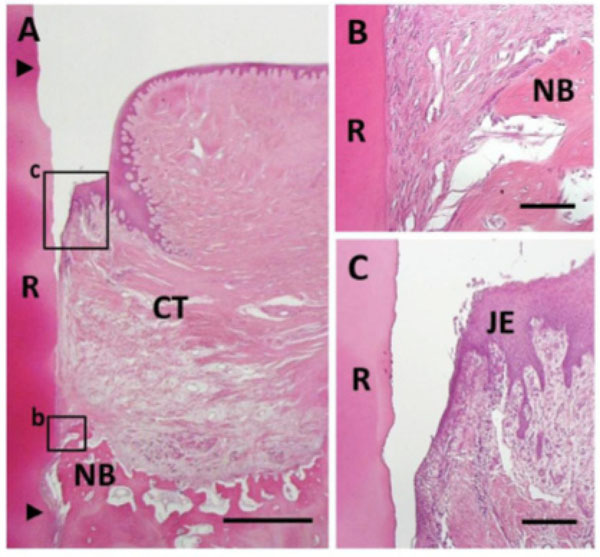 ). Formation of alveolar bone, cementum and periodontal ligament were limited only in the apical portion of the defect (Fig. 7B

). No ankylosis or root resorption was observed. In the coronal portion, there was no evidence of cementum or periodontal ligament formation, and gingival tissue adhesion was seen. Epithelial downgrowth and gingival recession were frequently observed (Fig. 7C

The degree of periodontal healing in one-wall infrabony defects is presented in Table 1. There were no significant differences among mean defect height and width in each group. Combination therapy using BMP and collagen hydrogel scaffold facilitated periodontal healing, as compared to the use of each alone. In specimens in the BMP/Col group, cementum-like tissue and periodontal ligaments associated with stable periodontal attachment showed significant reconstruction when compared to the control and BMP groups. In the Col group, periodontal attachment was stimulated; however, its levels in the BMP/Col group were approximately 1.5-fold greater than in the Col group. In the BMP group, significantly more cementum-like tissue was observed when compared to the control group, but periodontal ligament formation was not accelerated.

Bone conducting parameters showed that BMP and collagen hydrogel application greatly promoted formation of alveolar bone. The bone forming effects in the BMP/Col group were the most active of all groups. We also found greater new bone height and area in the BMP and Col groups as compared to controls; however, the BMP group frequently showed ankylosis. The frequency of abnormal healing, including ankylosis, epithelial downgrowth and gingival recession, is shown in Table 2. Ankylosis was evident in six defect sites in the BMP group, suggesting that periodontal healing was unpredictable in BMP coating therapy. Specimens receiving collagen hydrogel scaffold demonstrated a little bone adhesion, regardless of root surface modification by BMP. Accordingly, hydrated collagen application clearly suppressed BMP-related ankylosis.

There were no significant differences in junctional epithelium and gingival recession among the groups. However, the BMP-treated group tended to show decreased epithelial downgrowth. In addition, experimental groups showed a low frequency of gingival recession.

We assumed that the key to regulation of ankylosis and predictable periodontal attachment is localizing BMP and its cell source in the defect. Several studies have designed methods for BMP localization, i.e., instrumented root surfaces are fully covered with biomaterials having no BMP and defects are filled with BMP-loaded materials, in an effort to separate BMP effects from the root and to prevent populating of osteoblastic cells around the root surface [17Saito E, Saito A, Kawanami M. Favorable healing following space creation in rhBMP-2-induced periodontal regeneration of horizontal circumferential defects in dogs with experi-mental periodontitis. J Periodontol 2003; 74: 1808-5.]. In contrast, this examination applied BMP to the root surface and not to the periodontal defect in anticipation of the proliferation of periodontal ligament cells throughout the defect. Subsequently, proliferating periodontal cells should be attached to the BMP-modified root surface and then form hard tissues on the root. The results of this study showed that periodontal ligaments with cementum-like tissue are favorably re-established on BMP-applied root surfaces and that ankylosis is rarely observed. According to these results, we believe that BMP modification with a sufficient population of periodontal cells specifically inhibited the occurrence of ankylosis.

We established a combination method using root surface modification with BMP and collagen hydrogel scaffold implantation to rebuild periodontal attachment. Single use of BMP produces severe ankylosis and limited reconstruction of the periodontal ligament. BMP application together with hydrated collagen scaffold provided new periodontal attachment including cementum-like tissue, periodontal ligament and alveolar bone. Our study also confirmed that BMP-related ankylosis disappears with implantation of the collagen hydrogel. The combination method presented in this study will be useful for guiding predictable periodontal healing in advanced periodontitis.

We are grateful to Dr. Masaru Henmi, PhD, and our colleagues for their assistance. We would also like to thank Olympus Terumo Biomaterials Corp. for providing the FC-HAC and Astellas Pharma Inc. for providing BMP-2. This work was supported by JPSP KAKENHI Grant Number 22791916 and 23792266.