Quality of Life in Fibromyalgia Patients with Craniomandibular Disorders

Fibromyalgia (FM) is a rheumatic disease which affects fibrous tissues and muscles; it is characterized by chronic pain and it is often associated with craniomandibular disorders (CMD). 31 patients were assessed from March 2012 to October 2012 through the administration of specific questionnaires and following neurologic and gnatologic assessment. A relevant corre-lation between FM and CMD emerges from the present study, as 80.6% of our patients report CMD symptoms with high prevalence of myofascial pain (84%). Multivariate regression analysis revealed that the patients in the present study did not differ in score of quality of life questionnaires from patients with fibromyalgia. The neuropathic pain diagnostic question-naire (DN4) scores were positively affected by belonging to group II of Research Diagnostic Criteria of Temporomandibular Disorders (RDC/ TDM) classification, suggesting the possibility of a neuropathic component in chronic pain in this CMD group, as already speculated in our study on the correlation between burning mouth syndrome and CMD and by other au-thors in studies on chronic low back pain. However, further clinic and instrumental studies are needed in order to test this as-sumption.

Fibromyalgia (FM), according to the American College of Rheumatology (ACR) [1Wolfe F, Smythe HA, Yunus M , et al. The American College of Rheumatology 1990, Criteria for the Classification of Fi-bromyalgia.Report of the Multicenter Criteria Committe. Arthitis Rheum 1990; 33: 160-72.] “is a chronic musculoskeletal pain syndrome of unknown etiology, characterized by widespread pain for more than 3 months and tenderness in at least 11 tender point sites out of 18”.

Other symptoms are physical and mental tiredness, insomnia and neuropsychological problems[1Wolfe F, Smythe HA, Yunus M , et al. The American College of Rheumatology 1990, Criteria for the Classification of Fi-bromyalgia.Report of the Multicenter Criteria Committe. Arthitis Rheum 1990; 33: 160-72.].

The causes of FM are unknown, although it is generally agreed that the persistence of musculoskeletal pain is due to the so called ‘mechanism of central sensitization’ [4Staud R, Rodriguez ME. Mechanisms of disease pain in fi-bromyalgia syndrome. Nat Clin Pract Rheumatol 2006; 2: 90-8.-6Woolf CJ. Central sensitization: implications for the diagnosis and treatment of pain. Pain 2011; 152: S2-S15.]. De Tommaso [7De Tommaso M, Federici A, Serpino C , et al. Clinical features of headache patients with fibromyalgia comorbidity. J Head-ache Pain 2011; 12: 629-38.] defined central sensitization as “a phenomenon present in any type of pain, nociceptive or neuropathic, where a noxious stimulus, able to recruit the C and A-delta sensory fibers, reduces in a short times the pain threshold in the primarily involved areas, a phenomenon known as hyperalgesia, while in the adjacent zones any mechanical input becomes painful, as an effect of the so-called “allodynia”.

- 1b: myofascial pain with limited opening;

- 2a: disk displacement with reduction;

- 2b: disk displacement without reduction, with limited opening;

The aim of our work was to determine the prevalence of CMD among patients with FM and CMD, classifying craniomandibular symptoms within the Dworkin and LeResche’s subgroups. FM syndrome and CMD are both chronic diseases and different authors studied the effects of chronic pain on the quality of life among patients affected by this [19Kempen GI, Ormel J, Brilman EI, Relyved J. Adaptive re-sponses among.Dutch elderly the impact of eight chronic medical conditions on health-related quality of life. Am J Pub-lic Health 1997; 87: 34-44., 20Schlenk EA, Erlen JA, Dunbar-Jacob J , et al. Health-related quality of life in chronic disorders a comparison across stud-ies using the MOS SF-36. Qual Life Res 1998; 7(1): 57-65.].

Gijsen et al. [21Gijsen R, Hoeymans N, Schellevis FG , et al. Causes and con-sequences of comorbidity A review. J Clin Epidemiol 2001; 54(7): 661-74.] claimed that “longitudinal studies suggest that the cumulative effect of comorbid conditions is not simply additive: certain combinations of diseases may have a greater effect on quality of life than others”. Therefore the second aim of our study was to determine the burden of CMD symptoms on quality of life among FM patients, testing the hypothesis according to which fibromyalgia subjects affected by craniomandibular disorders have poorer quality of life than fibromyalgia patient without CMD.

This study was completed between March and October 2012 at the Neurophysiopathology of Pain Unit, Bari University Hospital. All the participants filled in an informed consent form; the Ethics Committee of the Policlinico General Hospital approved this study. Of the 100 patients examined in the above mentioned facility, reporting chronic pain not ascribable to any pathology, 55 received a fibromyalgia diagnosis. Of these 55 patients, 31 were willing to undergo a gnatologic visit and to fill in questionnaires aiming at the assessment of their quality of life (Fig. 1 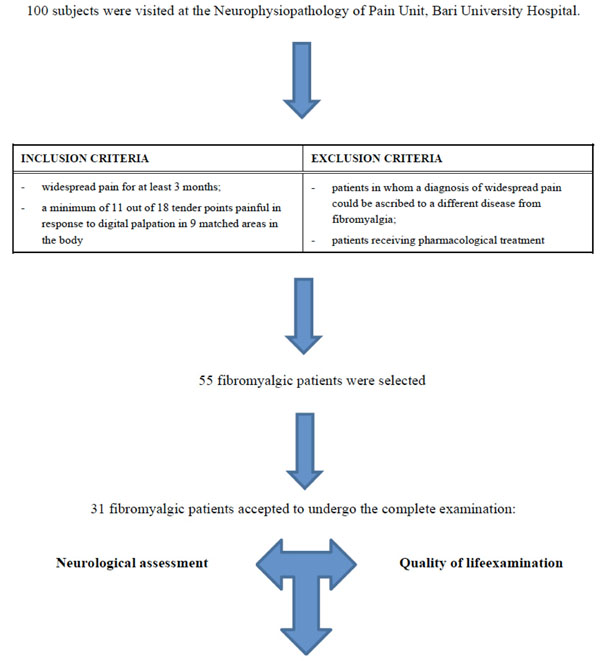 For each sample component age, gender and profession. pain severity and frequency information were measured and reported. A neurological examination was carried out followed by a clinical-gnatologic assessment verifying the presence of widespread pain also on the orofacial region level and the presence of CMD signs and symptoms. In the first examination, the quality of life of fibromyalgia patients was measured using various instruments.

FIQ, according to Burckardt et al. [25Burckardt CS, Clark SR, Bennett RM. The Fibromyalgia Im-pact Questionnaire development and validation. J Rheumatol 1991; 18: 728-33.], “is a self-reported instrument that measures the current health status of the FM patient”; it includes 13 items assessing the difficulty in performing common, everyday life activities, general health, working activity and 7 items assessing the intensity/severity of symptom on a VAS scale from 0 to10.

The final score may vary from a minimum of 0 to a maximum of 100 (higher scores represent a higher impact of the disease on the patient’s quality of life) [25Burckardt CS, Clark SR, Bennett RM. The Fibromyalgia Im-pact Questionnaire development and validation. J Rheumatol 1991; 18: 728-33.].

In the present study we adopted a 0-70 simplified score system that includes only 7 items assessing the intensity/severity of symptom (with 70 indicating greater impairment).

For each of the selected patients a file was filled in, it included demographic variables, pain duration at t0, psychological tests (SF-36 ISF, SF-36 ISM, FIQ), VAS score, DN 4 Questionnaire outcomes, number of tender points, pain frequency and location, parafunctions, CMD group to which the patient was assigned in accordance with the RDC/TDM classification. The files were then put in a database created with File Marker Pro software and analyzed with STATA MP11 software. The quantitative variables were expressed as means ± standard deviation; qualitative variables as proportions. As to assess the effect of age, gender, pain duration at t0, VAS, tender point, pain frequency and location, presence of parafunctions, CMD group on the outcomes of psychometric tests about the quality of life, multivariate regression models were set. For all the used tests a value of P < 0.05 was considered substantial.

In 25 FM patients (80.6%) symptoms and signs of craniomandibular disorders were observed. 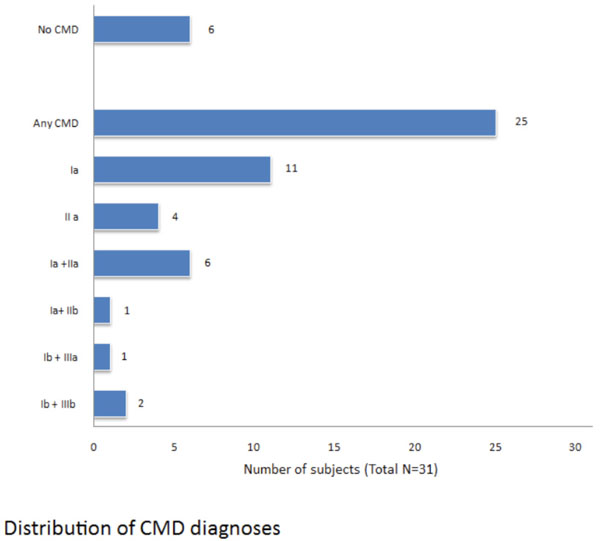 ) we reported the distribution of craniomandibular disorders diagnosis according the RDC/TMD classification Summarizing, a muscular disorder is present in 21 patients (84%), a disc dislocation in 11 patients (44%), inflammatory and degenerative joint disorders in 3 patients (12%). In 40% of cases we have a combined diagnosis.

Descriptive statistics were performed to summarize sample characteristics in Table 1.

Results of comparison between FM patients with CMD and FM subjects without any symptoms Differences between groups are significant at p<0.05. N.S.: Not significative.

In Table 2 are presented the results of a comparison of quality of life assessment between FM patients affected by craniomandibular disorders and FM subjects without any symptoms.

As we note, quality of life scores for all domains of the SF-36 were similar between patients groups.

Our results suggest that craniomandibular disorders are pervasive among the FM population, as 80.6% of our patients report CMD symptoms with high prevalence of myofascial pain (84%), alone or associated to disc dislocation or to arthralgia. These results are consistent with Plesh et al. [11Plesh O, Wolfe F, Lane N. The relationship between fibrom-yalgia and temporomandibular disorders prevalence and symptom severity. J Rheumatol 1996; 11: 1948-52.] who reported that 75% of subjects with FM suffered from muscle-related CMD.

Myofascial pain in the masticatory muscles is a significant component in fibromyalgia according several authors.

According to these authors, there is a strong evidence of central sensitization in myofascial pain, “including decreased pain threshold by various nociceptive stimuli at sites remote from painful areas, accentuated nociceptive spinal flexion reflex and augmented cortical activation by functional magnetic resonance imaging” [18Yunus MB. The prevalence of fibromyalgia in other chronic pain conditions. Pain Res Treat 2012; 2012: 584573.].

The second aim of our study was to determine the burden of CMD symptoms on quality of life among patients with FM.

Several studies suggest that certain combinations of comorbid conditions may have a greater effect on quality of life than others [21Gijsen R, Hoeymans N, Schellevis FG , et al. Causes and con-sequences of comorbidity A review. J Clin Epidemiol 2001; 54(7): 661-74.]. In our study, the quality of life scores were similar in fibromyalgia patients with or without CMD: FM totally contributed to the physical and mental disability in affected individuals that we examined. Also Marcus et al. [30Marcus DA, Bernstein C, Rudy TE. Fibromyalgia and head-ache an epidemiological study supporting migraine as part of the fibromyalgia syndrome. Clin Rheumatol 2005; 24: 595-601.] in their epidemiological study on fibromyalgia and headache found that migraine did not affect the perception fibromyalgic patients had of their disease. Hoffman and Dukes [31Hoffman DL, Dukes EM. The health status burden of people with fibromyalgia a review of studies that assessed health status with the SF-36 or the SF-12. Int J Clin Pract 2008; 62: 115-26.], in an article on the health status of patients with fibromyalgia examined the extent to which FM contributed to the overall health status burden of patients with and without a specific concurrent condition and they found that “while health status in general population deteriorated in conjunction with the number of pain condition present, FM had a remarkably consistent pattern of health status impairment even that it occurred alone”.

In other words, patients with FM are already so burdened by their condition that the introduction of an additional pain condition (as masticatory muscle pain in our patients) does not affect their health related quality of life (HRQoL) [32Wagner JS, DiBonaventura M, Chandran AB, Cappelleri C. The association of sleep difficulties with health-related quality of life among patients with fibromyalgia. BMC Musculoskelet Disord 2012; 13: 199-207.].

Limitations of this study are the small sample size and that all health status data were based on self-report. Further clinic and instrumental analysis (such as a standardized protocol of quantitative sensory testing and laser-evoked potentials) are needed in order to test the hypothesis of a neuropathic component of pain due to craniomandibular disorders.

The results of the present study suggest the existence of a close association between FM and CMD. A high percentage of FM patients (80.6%) indeed resulted to be positive to at least one RDC/TMD diagnosis.

We therefore suggest to subject FM patients to a gnatologic assessment in order to complete their diagnostic situation.

On the other hand the dentist should be able to perform a differential diagnosis between localized or systemic muscle disorders, as to better handle patients with orofacial pain. In fact, once identified, TMD patients who have co-morbid conditions such as fibromyalgia, can best be treated by an interdisciplinary team of clinicians.