The capacity to sample otoliths of fish from commercial, recreational, artisanal or subsistence catches can be constrained if the dissection process results in alterations to their external appearance and thus reduces its value and/or shelf life. There can also be significant biases incorporated into the collection of otolith samples if access is only granted relative to the size of the fish (i.e. if smaller fish are sold whole). To reduce such limitations, we herein describe a rapid and simple method of lateral otolith extraction that maintains the integrity of the fish product, and thus reduces potential biases in sample collection for age structure data. Representative sampling is an important consideration for the collection of age structure data when it is intended to be used in fisheries stock assessments.

Sagittal otoliths of fish are currently regarded as the primary structure for obtaining reliable estimates of their age [1Campana SE. Accuracy, precision and quality control in age determination, including a review of the use and abuse of age validation methods. J Fish Biol 2001; 59: 197-242.
[http://dx.doi.org/10.1111/j.1095-8649.2001.tb00127.x] ]. Deriving estimates of mortality from age structure data for an exploited population of fish is an integral part of determining their sustainable harvest through quantitative stock assessments. To improve the accuracy of stock assessment estimates it is vital that the collection of age structure data be representative of the temporal and spatial distribution of fishing catch and/or effort. Considering fish population monitoring studies are usually constrained by funding and resources, collections of otoliths rely on the assistance of fishers to allow scientists to perform fish dissections on their valued catches. Such access is often restricted due to the sampling process resulting in alterations to the fish’s external appearance and/or exposing internal structures to the external environment, subsequently reducing their value and shelf life (e.g. [2Schneidervin RW, Hubert WA. A rapid technique for otolith removal from Salmonoids and Castostomids. N Am J Fish Manage 1986; 6: 287.
[http://dx.doi.org/10.1577/1548-8659(1986)6<287:ARTFOR>2.0.CO;2] ]). In order to reduce bias in age structure data during sampling access to catches needs to be maximised. This can be achieved through a rapid technique of otolith extraction that maintains the appearance and quality of sampled fish, which would thus overcome many factors that may prevent access for dissections prior to size-based grading (e.g. filleting of larger fish, selling of smaller fish whole), which reduces the potential for sampling bias.

Sagittal otoliths are located within the otic capsule that forms the ventral, posterior portion of the cranium. The otic capsule is made up predominantly of the exoccipital, basioccipital and parasphenoid bones (Fig. 1b 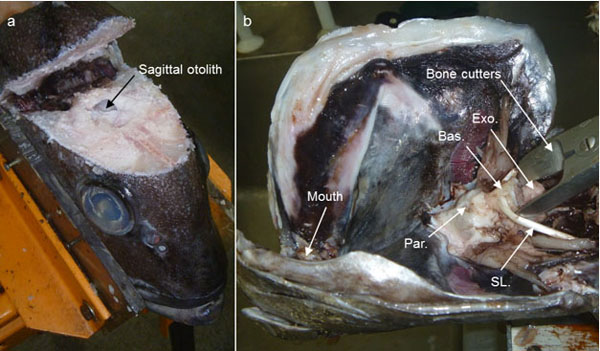 ). Sagittal otoliths are most commonly extracted either 1) dorsally by opening the cranium using a sawing device, or 2) ventrally by removing the gills to expose the otic capsule which can be levered opened using bone cutters or scissors (Fig. 1

), [3Secor DH, Dean JM, Laban EH. Manual for otolith removal and preparation for microstructural examination: Electric Power Research Institute and Belle W. Columbia, S.C: Baruch Institute for Marine Biology and Coastal Research 1991.].However, both these extraction methods require significant alterations to the physical appearance of the fish, which can reduce the value of the fish and subsequently limit access to catches for scientific dissections.


The lateral extraction of sagittal otoliths proposed in this study offers a quick and relatively much less invasive technique, that accesses the otic capsule (i.e. the ventral, posterior portion of the cranium) by going under the operculum. A headlamp is recommended to illuminate the gill cavity underneath the operculum. A small incision is made through the cartilage at the dorsal junction of the first few gill arches and the parasphenoid process (Fig. 2a 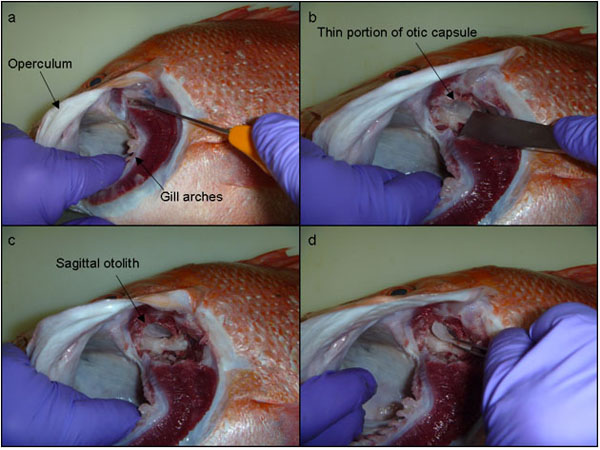 ). These first few gill arches can then be shifted aside slightly and a knife/chisel used to scrape away the membranous tissue to expose the lateral aspect of the otic capsule (Fig. 2b

). With the tip of a surgical-grade chisel (generally 20-25 mm blade width) the lateral portion of the basioccipital bone of the otic capsule can be shaved off (Fig. 2b

). This lateral portion of the basioccipital bone is relatively thin in most fish and can generally be shaved off with little effort. Once this portion of bone is removed the sagittal otolith is obvious (Fig. 2c

Logistic support for this study was provided by the Department of Fisheries (Western Australia). The authors would like to thank Doug Gibson (commercial fisher) and the fish processing staff at Sealanes (Fremantle, Western Australia) for allowing access to fish for dissections.