Do You Eat or Not? Predation Behaviour of European Catfish (Silurus glanis) Toward Live Bait on a Hook

We filmed and analysed, in natural and field conditions, behaviours of large-bodied European catfish (Silurus glanis) individuals (body size ranging from 80 to 220 cm) exposed to a hook baited with 20 cm-long Carassius spp. Among a total of 95 individuals observed, 80 % of the catfish clearly demonstrated interest in the bait but attacks were performed only 25 % of the time and only 12.5 % of fish were hooked. More than half of the individuals (55 %) were observed swimming toward the bait and then turning around or tasting it without performing any attacks. These observations showed that individual fish motivation and behaviour are important factors in determining whether European catfish are attracted to bait and eventually hooked.

The European catfish is very popular with anglers because of the large body size -it is the largest European freshwater fish [14Stone R. Aquatic ecology. The last of the leviathans. Science 2007; 316(5832): 1684-8.
[http://dx.doi.org/10.1126/science.316.5832.1684] [PMID: 17588909] ]. The European catfish is also a relevant model to perform observations in natural conditions. Here, we describe the behaviour of European catfish and measure their responses to a baited using video cameras and hooked live bait.

Thirteen fishing trials (1.5-hour long) were conducted in the Dordogne River (southwest France, coordinates 44°85’56” N, 0°56’55”E) from 15 August to 25 September2013 in the late morning (between 11 am and 3 pm) by the same experienced angler (PV). A Fishing trial consisted of in longline fishing with a boat along river transects using a single hook and live bait. The Dordogne River is public domain with free access for anglers with a fishing license.

Water temperature (25.7 °C ± 3.2 SD) and current (mean discharge 108 m3 s-1 ± 17 SD) were stable during trial periods. Observations were performed in a large stretch of the river (mean length = 30 km, mean width = 80 m) to decrease the probability of encountering the same individual from another trial. Individual natural marks (e.g., pectoral fin injury) were used to discriminate among individuals and avoid pseudo replication during the trials. In total 103 European catfish individuals were observed on the 17 h of video footages. Footages that did not accurately describe catfish behaviour or allow an estimate of catfish body size were not analysed. In addition, catfish individuals with body size below 80 cm were excluded from the analysis to ensure that every observed individual was able to ingest the bait [17Wysujack K, Mehner T. Can feeding of European catfish prevent cyprinids from reaching a size refuge? Ecol Freshwat Fish 2005; 14: 87-95.
[http://dx.doi.org/10.1111/j.1600-0633.2004.00081.x] ].

Five fish behaviours were defined from the video analysis and used to characterise catfish reactions in front of the bait (see movie S1):

We compared body size between individuals that exhibited different fish behaviours using non-parametric tests (Kruskal-Wallis test and Mann-Whitney test). The direction from which the bait was tasted or ingested (front, behind, or sides) was determined for each catfish individual. We also measured and compared the time between catfish appearance in the field of the camera and catfish action, i.e., tasting the bait (first occurrence) or ingesting the bait. Statistical analyses were conducted using R software.

). The remaining 24 individuals (25 %) that bit the bait, rejected it and swam away, while the other half ingested the bait. Among these 12 hooked fish, the angler caught 6. These results also confirm that European catfish is not only a nocturnal predator but can be also active across diurnal periods in rivers, see also [18Slavík O, Horký P, Bartoš L, Kolářová J, Randák T. Diurnal and seasonal behaviour of adult and juvenile European catfish as determined by radio-telemetry in the River Berounka, Czech Republic. J Fish Biol 2007; 71: 104-14.
[http://dx.doi.org/10.1111/j.1095-8649.2007.01471.x] ]. 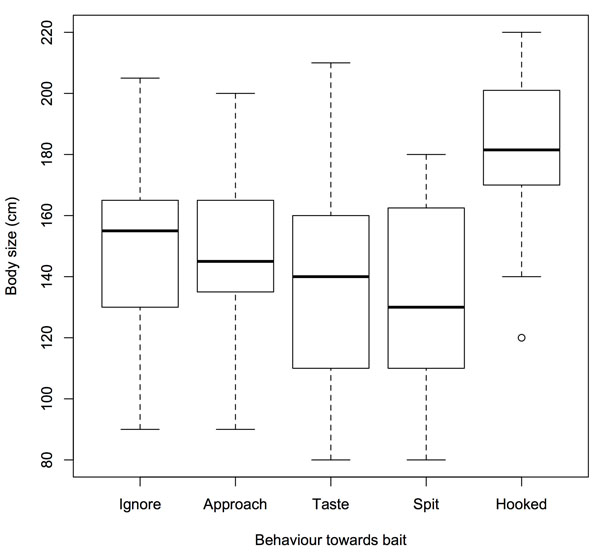 ). Other behaviour comparisons in body size were not significant.


Tasting the bait was the most frequently observed behaviour and was decomposed into two patterns: catfish individuals tasted the bait with flexible cartilaginous barbs (31 %), whereas other (69 %) tasted the bait with upper jaw and fleshy lips exhibiting a typical slow-sliding movement on the bait (Fig. 3 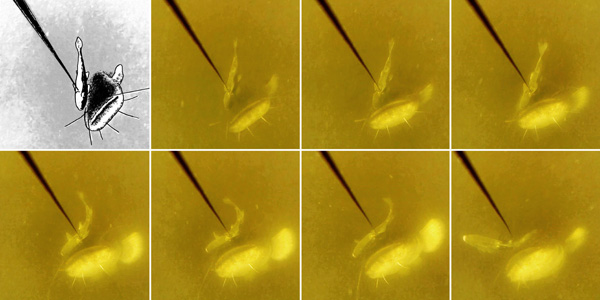 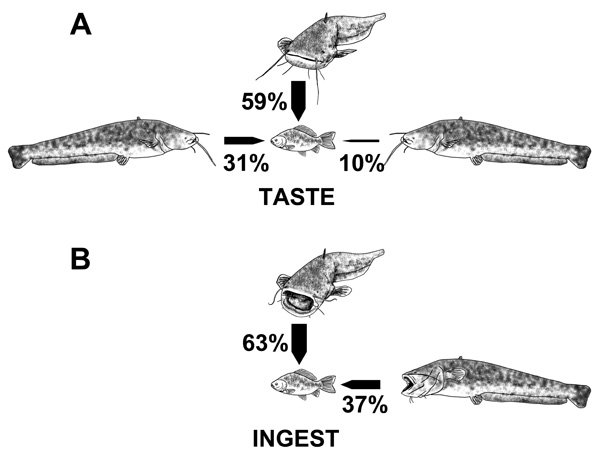 Though 76 catfish individuals demonstrated a clear interest in live bait, the experienced angler only caught 6 catfish, and failed in capturing 6 others that were hooked. The low of hooked individuals demonstrated that attracting fish does not mean catching fish, suggesting that fish motivation and behaviour are determinants to consider among factors that encourage catfish to ingest bait. Among the 76 individuals which demonstrated interest toward live bait, 52 ‘curious’ catfish individuals, but suspicious, approached the bait or even tasted it without biting it, using their fleshy lips and barbels to explore it. The others exhibited rapid attack behaviour, but in 50 % of observations, catfish spit the baited hook after ingesting it, probably because of their high gustatory and mechanosensory systems [24Kasumyan AO, Døving KB. Taste preferences in fishes. Fish Fish 2003; 4: 289-347.
[http://dx.doi.org/10.1046/j.1467-2979.2003.00121.x] ]. Catfish individuals exhibiting this attack behaviour displayed a large range of body sizes (80 - 220 cm). Though bait size was unlikely to influence body size of catfish individuals approaching, tasting or ingesting the bait, individuals spitting bait were smaller than hooked individuals. Having a smaller mouth may increase the probability of coming into contact with the hook, thus triggering an aversive avoidance reaction from the fish.

Supplementary material is available on the publishers Web site along with the published article.

The authors would like to thanks N. Guillerault and Dr. David J. Jude for their useful comments in the previous version of this manuscript.