Several nontuberculous mycobacteria (NTM) were previously isolated from diverse environments such as water, soil, sewage, food and animals. Some of these NTM are now known to be opportunistic pathogens of humans.

The main purpose of the study was to identify NTM isolates stored at the National Microbiology Reference Laboratory (NMRL) and were previously isolated from humans during a national tuberculosis (TB) survey.

Pure NTM cultures already isolated from human sputum samples during the national TB survey were retrieved from the NMRL and used for this study. DNA was extracted from the samples and 16S ribosomal RNA gene amplified by polymerase chain reaction. The amplicons were sequenced and bioinformatics tools were used to identify the NTM species.

The study emphasizes the importance of identifying species of NTM in Zimbabwe. Future studies need to ascertain their true diversity and clinical relevance.

Nontuberculous mycobacteria (NTM) include all mycobacteria species that do not belong to Mycobacterium tuberculosis (Mtb). They are a heterogeneous group of bacteria that are ubiquitously distributed in diverse environments such as water, sewage, soil, air, dust, food, animals and humans [1Falkinham JO III. Environmental sources of nontuberculous mycobacteria. Clin Chest Med 2015; 36(1): 35-41.
[http://dx.doi.org/10.1016/j.ccm.2014.10.003] [PMID: 25676517] , 2Hruska K, Kaevska M. Mycobacteria in water, soil, plants and air. Vet Med (Praha) 2012; 57: 623-79.]. To date, more than 150 species of NTM have so far been identified, but most of them are still poorly characterized and their clinical relevance is poorly understood.

The research design was an observational study in which NTM samples previously isolated from humans throughout Zimbabwe during a national TB survey were used. The samples were already stored at the National Microbiology Reference Laboratory. These samples were collected during the national TB survey that was carried out by the Ministry of Health and Child Care of Zimbabwe in 2014. During sample collection, all adult subjects gave their verbal informed consent for inclusion before they participated in the study. Sputum samples were collected from participating subjects after consenting. Two methods were used to screen for participants who were enrolled into the study, a questionnaire and chest X-Ray. From the questionnaire data, anyone with a cough of any duration was recruited into the study. With the chest X-ray, any abnormality consistent with TB was also considered as an entry point into the study. Two sputum samples, spot and morning, were collected from each of the participants and sent to the NMRL under cold chain conditions for processing. The two sputum samples from each participant were processed for TB culture and inoculated onto solid media, Lowensen Jensen (LJ) media (Becton Dickson Microbiology Systems, USA) and liquid media, Mycobacterial Growth Indicator Tube (MGIT) (Becton Dickson Microbiology Systems, USA). LJ culture tubes were incubated at 37°C while MGIT tubes were incubated in the BACTEC MGIT 960 machine and growth monitored. Once growth was observed on LJ and the BACTEC MGIT 960 Flagged positive, samples were stained with Ziehl Neelsen stain. If acid fast bacilli were present, the isolates were tested for presence of Mycobacterium tuberculosis (Mtb) bacteria using a rapid identification kit for Mtb, the MPT64 Ag kit (Standard Diagnostics, Korea) according to manufacturer’s recommendations. Positive results indicated presence of Mtb while negative results indicated the NTM. However to prove they were NTM, the isolates were further tested for growth in presence of paranitrobenzoic acid and their ability to grow at different temperatures, 25°C, 37°C and 45°C. Cultures were stored in liquid media at -80 oC until DNA extraction.

To prepare DNA extracts, 1ml of bacteria grown in liquid media was collected and centrifuged (with centrifuge with aerosol tight rotor) for 15 min at 10 000g. The supernatant was discarded and 100 µl sample lysis buffer (Hain Lifescience, Germany) added. The pellet was resuspended in the buffer and incubated at 95°C in a heat-block. After incubation for 5 mins, 100 ul of sample neutralization buffer (Hain Lifescience, Germany) was added and the mixture briefly vortexed. The extract was centrifuged for 5 mins at maximum speed in a centrifuge with aerosol tight rotor. The supernatant (DNA extract) was transferred into new tube and stored at -20°C until polymerase chain reaction of the 16S rRNA gene.

The 5'-end of the 16S rRNA gene of genus Mycobacterium was amplified by polymerase chain reaction as previously described [9Padya L, Chin’ombe N, Magwenzi M, Mbanga J, Ruhanya V, Nziramasanga P. Molecular identification of mycobacterium species of public health importance in cattle in Zimbabwe by 16S rRNA gene sequencing. Open Microbiol J 2015; 9: 38-42.
[PMID: 26668660] ]. The Mycobacterium-specific forward primer, 5′-CCT GCA CTT CGG GAT AAG CCT G -3′, and reverse primer, 5′-CAA CGC GAC AAA CCA CCT ACG A -3′ were used for the polymerase chain reaction. The following cycling program was used for amplification: initial denaturation of 5 minutes at 95°C followed by 35 amplification cycles of 30 seconds at 95°C, 30 seconds at 55°C, and 45 seconds at 72°C, and ending with a final extension step of 7 minutes at 72°C. PCR products (10 ul) from the samples that amplified well and with a gel band of approximately 460 bp were sent for sequencing at Inqaba Biotechnical Industries, South Africa. Only the forward primer was used for the sequencing of the amplicons. DNA sequences were analyzed using Geneious Basic program (Biomatters, USA) and the Basic Local Alignment Search Tool (BLAST) programs. The different NTM species were identified using Geneious Basic program which compared our sequences with those in the Genbanks. Phylogenetic trees were also constructed using the Geneious Basic program.

In the Zimbabwe National TB prevalence survey of 2014, a total of 963 NTM samples were isolated from the participants and stored at the National Microbiology Reference Laboratory in Harare. In this study, we retrieved 99 of the 963 isolates for speciation using 16S ribosequencing molecular method. 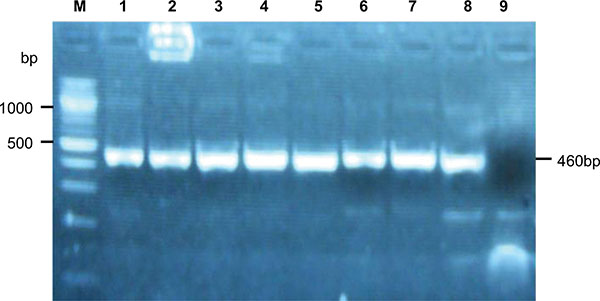 ). An expected DNA band of approximately 460 bp was observed on agarose gel for most samples. Out of the 99 samples, 94 showed successful amplification of the ribosomal RNA gene. Of these 94 amplicons, 90 were sequenced. Bioinformatic analysis was performed on 81 of the NTM samples that showed perfect sequence results. 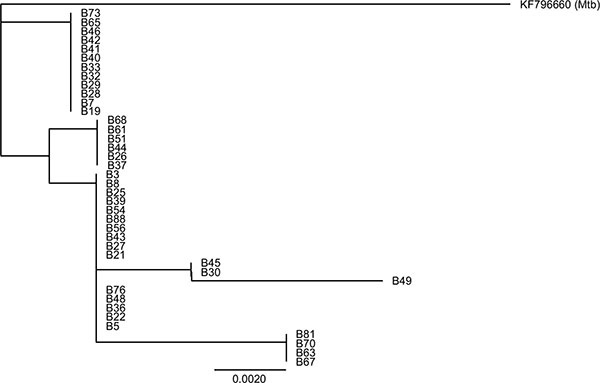 Identification of species of NTM by 16S ribosequencing (n = 81). 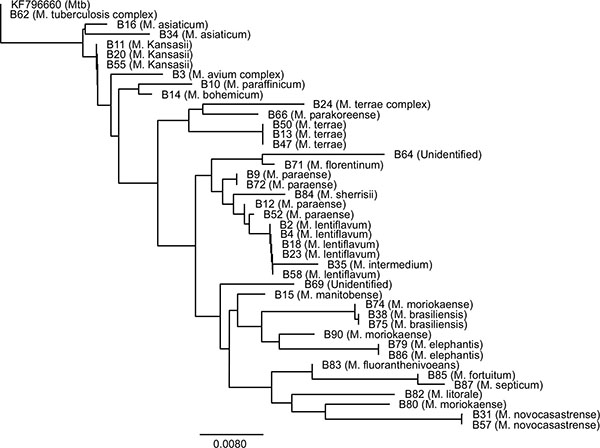 The study highlighted the importance of identifying species of NTM in Zimbabwe. The MAC species were found to be the most common NTM in humans during the national TB survey in Zimbabwe. Further studies are necessary to ascertain the true prevalence and clinical relevance of NTM species in the Zimbabwe especially in people with HIV/AIDS. Further studies are also necessary to establish the sources of human infections by NTM.