Staphylococcus aureus is a leading cause of food poisoning resulting from the consumption of contaminated food with staphylococcal enterotoxins. Raw meat is a good medium for the survival and spread of drug-resistant S. aureus.

To look for the prevalence of drug-resistant S. aureus in Addis Ababa abattoir enterprise.

A cross-sectional study was conducted from November 2013 to April 2014 in Addis Ababa abattoir enterprise. A total of 185 swab samples were collected from the carcasses of sheep, goat and slaughtering materials such as workers’ clothes, vehicles, knives and hands. Isolation and identification of S. aureus were conducted using the conventional culture methods and signatory tests. Antimicrobial sensitivity was conducted using standard methods.

The present study indicated that the quality of slaughtered sheep carcasses was more contaminated by S. aureus as compared to goat carcasses, during slaughtering, processing, handling and transportation. The presence of MDR strain in the carcasses demonstrates that there is a growing need to control antimicrobial resistance in sheep and goat carcasses.

Foodborne diseases often follow the consumption of contaminated food such as meat from infected animals or carcasses contaminated with pathogenic bacteria such as S. aureus. The majority of these microorganisms result from contamination occurring at the slaughterhouse [1Jevons MP. Celbenin-resistant staphylococci. BMJ 1961; 1: 124-5.
[http://dx.doi.org/10.1136/bmj.1.5219.124-a] ], where conventional veterinary inspection cannot detect the presence of these bacteria on apparently healthy looking carcasses [2Brown MH, Gill CO, Hollingsworth J, et al. The role of microbiological testing in systems for assuring the safety of beef. Int J Food Microbiol 2000; 62(1-2): 7-16.
[http://dx.doi.org/10.1016/S0168-1605(00)00408-6] [PMID: 11139 024] ].

Meat is not only highly susceptible to spoilage, but also frequently implicated in the spread of foodborne diseases. Contaminated raw meat is one of the main sources of foodborne diseases, whereby all potentially edible tissues are subjected to contamination from a variety of sources [3Bhandare SG, Sherikar AT, Paturkar AM, Waskar VS, Zende RJ. A comparison of microbial contamination on sheep/goat CARCASSES in modern Indian abattoir and traditional meat shops. Food Control 2007; 18: 854-8.
[http://dx.doi.org/10.1016/j.foodcont.2006.04.012] ].

AST was carried out on confirmed S. aureus using disc diffusion method according to CLSI [8Clinical and laboratory standard institute, CLSI Performance standard for antimicrobial susceptibility testing 2017. 27th informational supplement]. Briefly, each of the S. aureus isolates was inoculated into 5ml of trypton soya broth (Oxoid, UK) and incubated at 37°C until the suspension turbidity was equivalent to a 0.5 MacFarland standard as measured by turbidity meter before they were tested. The bacterial suspension was subsequently inoculated onto Mueller-Hinton agar plates (Oxoid, UK) and spread over the surface with sterile cotton swabs on a wooden applicator stick.

Antibiotic-impregnated discs were applied to the surface of inoculated plates by hand using sterile forceps. The discs were not closer than 15mm to the edge of the plate and they were 24mm apart from each other. The plates were incubated inverted aerobically for 18-24 hours at 37°C. Finally, the diameters of the zone inhibition around the discs were measured using a transparent ruler according to CLSI guideline [8Clinical and laboratory standard institute, CLSI Performance standard for antimicrobial susceptibility testing 2017. 27th informational supplement].

The antimicrobials used indicate gentamicin, kanamycin and chloramphenicol were the most effective antibiotics whereby 100%, 96.7% and 91.8% of the strains were sensitive respectively. Penicillin G, ampicillin, clindamycin and ceftriaxone have showed very poor activity on many isolates, whereby only 13.1%, 19.7%, 27.9% and 32.8% of the isolates were sensitive, respectively. Vancomycin resistance was not observed. Table 2 illustrates the rate of antibiotic resistance among commonly isolated bacteria.

Multidrug Resistance (MDR) is defined as a single isolate resistant to three or more unique antimicrobial classes. About 21(34.4%) of the strains were resistant to three or more classes of antibiotics. From which 17(27.8%), 3(5%) and 1(1.6%) of the isolates showed resistance to three, four and five classes of antibiotics respectively. The most frequent multidrug resistance pattern was AMP, CRO, FOX, CHL as shown in Table 3 (Fig. 1 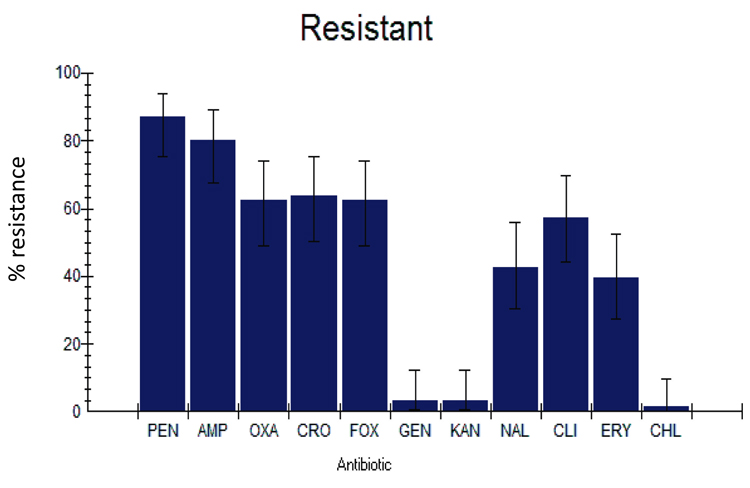 In the present study, 21 (34.4%) S. aureus strain showed multidrug resistance whereby the most common one was resistance primarily to ampicilin, ceftriaxone, clindamycin, cefoxitin. This could be due to the inappropriate use and misuse of β-lactam and other antibiotics as a means of treatment and thereby the development of resistance. This finding is lower in MDR resistance with the finding in a study [10Abebe M, Daniel A, Yimtubezinash W, Genene T. Identification and antimicrobial susceptibility of S. aureus isolated from sheep carcass, goat carcass and isolated from milk samples of dairy cows and nasal swabs of farm workers in selected dairy farms around Addis Ababa, Ethiopia. Afr J Microbiol Res 2013; 7(27): 3501-10.] which reported 45% of S. aureus strains had resistance to three and more of the tested antimicrobials which is much lower than the study which is 90% done in Jimma [11Fish D, Piscitelli S, Danziger L. A review of antibiotic classes and patient characteristics in 173 studies, pharmacy therapy 1995; 15: 279-91.]. Based on the result of this study vancomycin, chloramphenicol, gentamicin, and kanamycin were effective against S. aureus and this is in agreement with the findings of other investigators [1Jevons MP. Celbenin-resistant staphylococci. BMJ 1961; 1: 124-5.
[http://dx.doi.org/10.1136/bmj.1.5219.124-a] ].

The microbial population and dynamics of foodborne pathogens (S. aureus, Salmonella, Escherichia coli, and others) that comes in contact with fresh meat during slaughtering, dressing and processing present a challenging problem to the meat industry. The condition of the animals prior to slaughter, sanitary condition of the slaughtering environment, and slaughtering materials also contribute to transmission of S. aureus through meat and butchers. The occurrence of S. aureus in raw meat is of high importance where raw meat is eaten as a cultural food. Moreover, the presence of 75.4% MDR strain demonstrates the fast-growing strain of S. aureus which will become a threat to the public. Thus, it requires a strong and strict implementation of GMP up to the food handlers.

I thank all the staff of the public health and clinical microbiology laboratory for their help and collaboration in the development of this study. I also extend my gratitude to Addis Ababa Abattoir staff, who have collaborated and contributed to the collection of samples.