The decline in microbial quality of drinking water may be attributed to many factors among which the presence of biofilm within the distribution system is the major cause of contamination. Drinking water distribution systems provide an oligotrophic environment, for post-treatment recovery and regrowth of microorganisms including the opportunistic Nontuberculosis Mycobacterium (NTM).

The aim was to look for opportunistic non tuberculosis mycobacterium and indicator organisms of fecal contamination from biofilm in drinking water distribution pipeline from selected sites of Addis Ababa.

A total of 40 biofilm samples were collected from two sub-cities of Addis Ababa. Biofilm samples were taken from the inner surfaces of the get valve and water meter. For the detection of E. coli and E. faecalis, diluted biofilm samples were filtered, then it was incubated on respective culture media. For non-tuberculosis mycobacterium, the homogenized biofilm sediment was processed using the standard SD bio line method, whereby, The processed sediment was inoculated to appropriate solid and liquid culture media. The DNA extraction was conducted by chemical lysis followed by PCR amplification, from the grown colonies on LJ media (Löwenstein–Jensen). The identification of Mycobacterium species was performed by reverse hybridization using a membrane strip and an enzymatic color reaction.

From the total biofilm samples, 14 out of 40 (35%) were positive for mycobacteria species. M. gordonea was the most prevalent specie of Mycobacterium, whereby 8/14 (57.1%) of the isolates were from this species followed by M. fortuitum 1/14 (7.14%). About (35.7%) 5/14 of the genus Mycobaterium were unidentified species. Indicator organisms of fecal contamination (E. coli and E. faecalis) were found in 3/40(7.5%) and 6/40(15%) respectively. There was no statistically significant association between nontuberculosis mycobacterium and the indicator organisms at p value of 0.01.

The study has highlighted that the occurrence of NTM in drinking water distribution in a significant proportion. M. gordonae was found to be the most dominant species of nontuberculosis mycobacterium found in the distribution line biofilm samples.

The aim of this study was to look for opportunistic NTM and other indicator organisms (E.coli, E.faecalis) of fecal contamination and their association with biofilm in distribution pipeline from selected sites of Addis Ababa.

A total of 40 biofilm samples were collected from two sub-cities of Addis Ababa. The biofilm sample was taken from the inner surfaces of the faucets of the get valve and strainer/filter of water meter depending on the suitability for taking a sample using a sterile cotton-tipped swab moistened in 1ml sterile normal saline solutions. The area of biofilm removed in this way was approximately 1cm2. Collected samples were transported to the laboratory in an ice box and analyzed within 12 to 18 hr. From the total biofilm samples, 10 were taken from the strainer/water filter of the water meter, 27 from the get valve and 3 from the tanker or reservoir.

Biofilm samples were dispersed by vigorous vortexing in sterile physiological saline water. The homogenized samples were analyzed to determine the detection of E. coli, E. faecalis and mycobacterium spp.

The homogenized swab samples were diluted in peptone water filtered using cellulose membrane 0.45µm. The filtered membrane was transferred onto Tryptone Soya Agar (BBL) plates using sterile forceps and incubated for 4 h at 37°C. After 4 hrs of incubation, the membrane was transferred to Tryptic Bile Agar (BBL) at 44°C for 16-24 hr incubation. Finally, an indole test was done with the addition of 1-2 drops of James reagent on the colonies grown on the membrane.

2.1.4. Culture and Identification of NTM

Colonies of mycobacterium grown on LJ were prepared by suspending a loopful of the bacteria in 1 ml distilled water before extraction. For DNA extraction, the GenoLyse® kit and 500 micro liters of liquid culture was used. DNA extraction was performed by chemical lysis followed by heating to 95 °C for 5 min, centrifuged at 13400 g for 5 min and the supernatant was used for the assay. All the reagents needed for amplification were included in the Amplification Mixes A and B. After thawing, it was spin down AM-A and AM-B briefly and was mixed carefully by pipetting up and down in a room free from contaminating DNA. The DNA solution was added in a separate working area. Hybridization was performed by manually washing in an automated shaking water bath which was prewarmed at 45°C. The solutions HYB and STR were prewarmed to 37-45°C before use and were mixed. Using a suitable tube, the solutions were diluted to Conjugate Concentrate (CON-C, orange) and Substrate Concentrate (SUB-C, yellow) 1:100 with the respective buffer, It was mixed well and bring to room temperature. For each strip, 10 µl concentrate was added to 1 ml of the respective buffer to dilute CON-C before each use. After a final washing step, strips were air-dried and fixed on a paper; only bands whose intensities were as strong as or stronger than the universal control line were considered Mycobacterium CM VER 2.0 [10GenoType Mycobacterium CM VER 2.0. Hain Lifescience GmbH. https://www.hain-lifescience.de]. 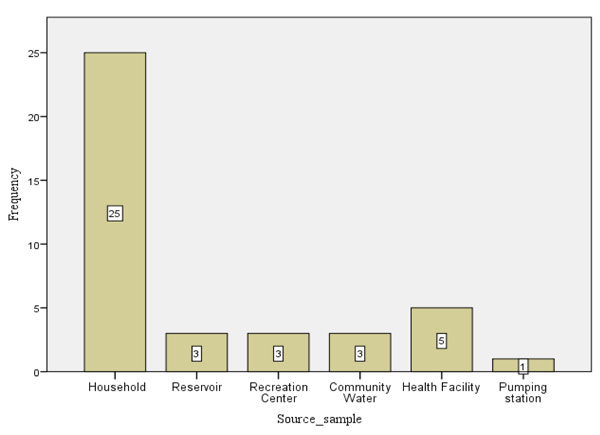 Table 1
Isolates of NTM from the collected Biofilm samples.

In general, out of the total 40 biofilm samples collected, positive isolates of mycobacterium species were found in 14(35%). There was a significant variation between the two sub-cities in terms of the occurrence of NTM which was 2/14 (14.3%) and 12/14 (85.0%) in the other sub-city. The majority of Mycobacterium 8/40 (20%) species were isolated from a household.

Among the isolates of NTM, M.gordonae was the most abundant species isolated 6/14(43%). There was only one species of M. fortuitum which was isolated from the household, the rest 3 mycobacterium were unidentified species.

Out of the total biofilm samples collected, 6/40(15%) were positive for E. faecalis. The distribution of the isolated E. faecalis by the source is shown in Table 3. 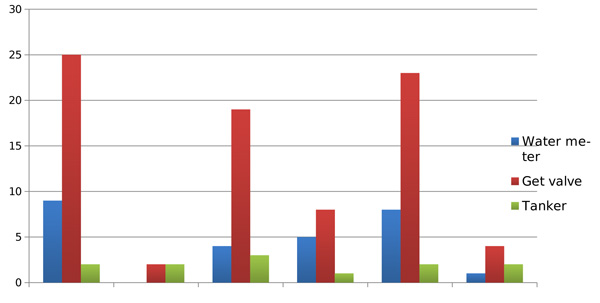 A significant percent of pathogen exists in a viable but noncultivable state, unable to grow on artificial growth media but alive and capable of renewed activity, and therefore being hygienically relevant [12Ashbolt NJ. Microbial contamination of drinking water and disease outcomes in developing regions. Toxicology 2004; 198(1-3): 229-38.
[http://dx.doi.org/10.1016/j.tox.2004.01.030] [PMID: 15138046] ]. Different literatures suggest that [11Griffith DE, Aksamit T, Brown-Elliott BA, et al. An official ATS/IDSA statement: diagnosis, treatment, and prevention of nontuberculous mycobacterial diseases. Am J Respir Crit Care Med 2007; 175(4): 367-416.
[http://dx.doi.org/10.1164/rccm.200604-571ST] [PMID: 17277290] ] in drinking water systems, the high majority of bacteria, estimated to be 95%, are located attached to the surfaces of pipelines, in the form of biofilm. While only 5% are found in the water phase (sessile phase) and detected by sampling as commonly used for quality control.

Biofilm samples taken from tankers or reservoir were highly predicted to have more pathogens as compared to samples taken from the get valve and water meter. It can be assumed as water is kept for a period of time, there is always an environment for the formation of biofilm, its survival and multiplication of microorganisms.

In a similar study but from drinking water it was found that M. gordonea was one of the dominant species isolated among the other species of NTM [15Covert TC, Rodgers MR, Reyes AL, Stelma GN Jr. Occurrence of nontuberculous mycobacteria in environmental samples. Appl Environ Microbiol 1999; 65(6): 2492-6.
[PMID: 10347032] ].

The protocol and methods employed were reviewed and approved by the Institutional Review Board, Faculty of medicine, Mansoura University, Mansoura, Egypt.

Informed consent was obtained from all the participants.