There is a growing appreciation of the potential value for routine screening for the presence of HPV not only for cervical specimens but also from oral cavity. The purpose of this study was to develop and clinically evaluate a single-tube seminested PCR assay for the detection of HPV. Several parameters such as PCR primers, primer annealing temperature, the number of PCR cycles and concentration of PCR components were optimized. The assay was evaluated using HPV inserts of type 6, 11, 16, 18, 31, 33, 38 and 51. Evaluation of seminested PCR assay was performed with cervical scrapings from 30 patients and buccal swabs from 30 head and neck cancer patients and results were compared with those of two-tube nested PCR. The results were found to be comparable with a total of 60% (36/60) of samples being positive for HPV using the single-tube assay, while 62% (37/60) positivity was found with two-tube PCR assay. We succeeded in developing a single-tube seminested PCR method for HPV DNA detection which is easier than the conventional nested PCR and can be further evaluated as a potential screening tool for detecting HPV in oral and cervical regions. 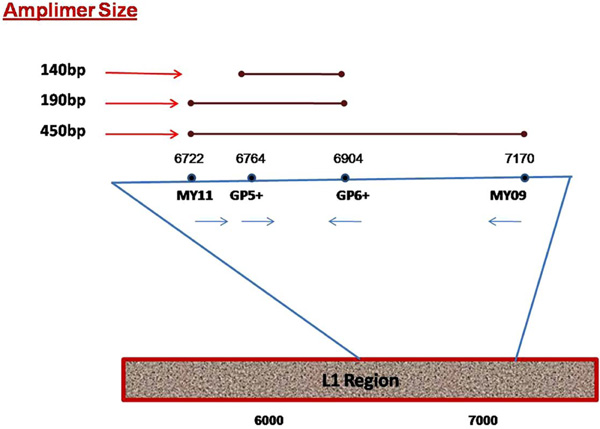 Optimization of the PCR was done on several parameters such as annealing temperatures of MY09/11 and MY11/ GP6+ primer pairs, concentration of MY09,11 and GP6+ primers, MgCl2, Taq polymerase and number of cycles for first and second round PCR, to obtain best results with HPV plasmid DNA.

For this assay optimized amounts of reagents (primers MY09, MY11, GP6+; MgCl2; Taq polymerase), dNTPs, buffer and sample DNA were made up to 20 µl total reaction volume. PCR was performed at optimized annealing temperatures and number of cycles on HPV plasmid mix. Sensitivity of the assay was also determined.

Informed consent was obtained from the participants before proceeding for sample collection. The study was approved by Human Research and Ethics Committee, Universiti Sains Malaysia (FWA Reg. No: 007718).

Cervical scrapings from 30 patients were obtained from Obstetrics and Gynecology clinics of Hospital Universiti Sains Malaysia (Table 1). Two swabs were obtained using cytobrush. One of the swabs was used in the preparation of Pap smear for evaluation by pathologists based on Bethesda reporting system, 2001 [16Solomon D, Davey D, Kurman R, et al. The 2001 Bethesda System: terminology for reporting results of cervical cytology JAMA 2002; 287: 2114-9.] while the other was stored in -20oC freezer for further analysis.

Buccal swabs from 30 head and neck cancer patients were collected using sterile EUROTUBO® collection swabs (Table 2). The swab was held against the buccal mucosa and rubbed for 10 seconds at each side and stored in -20oC freezer until further analysis.

DNA was extracted from samples with the QIAamp® DNA Extraction Mini Kit (Qiagen, Germany) according to the manufacturer’s protocol. To check the quality of DNA samples, a 268-base-pair sequence of β-globin gene was amplified as an internal control. PCR was performed on all clinical samples with optimized single-tube seminested and two-tube nested PCR to evaluate its clinical performance.

To obtain this 190bp amplicon in single-tube seminested PCR, optimization with primers MY09, MY11 and GP6+ was done. To allow for the difference in annealing temperatures, the melting temperatures (Tms) of outer and inner primer pairs were established more than 10°C apart. The highest amplification was observed at 53.0°C & 40.0°C for MY09/11 and MY11/GP6+ primer pairs respectively. The substantially higher first round annealing temperature (53°C) prevented the second round primers annealing to the template DNA until the temperature was reduced to 40.0°C at the start of the second round of amplification.

Different combinations of number of cycles were used, i.e. 5 and 30, 10 and 30, 20 and 30, 20 and 20, 30 and 30, for first and second round PCR respectively, to determine the optimum number of cycles. An increase in the first round of PCR cycles resulted in a strong MY09/11 band (450 bp) while an increase in second round cycles resulted in a strong MY11/GP6+ band (190 bp). In order to achieve clearly detectable amplification of the 190 bp product in the shortest overall time without any nonspecific bands, PCR with 10 cycles in the first round followed by 30 cycles for the second round was found to provide the best results.

3.2.. Evaluation of Single-Tube and Two-Tube PCR on HPV Plasmids 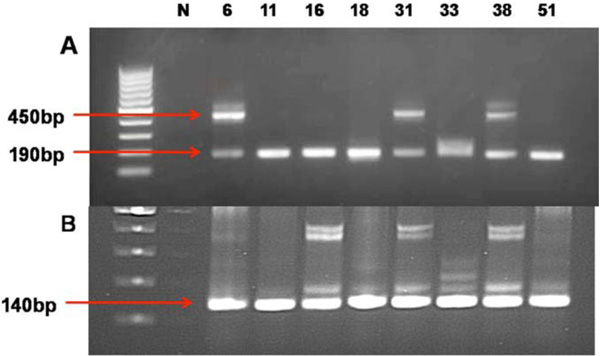 ). Results for two-tube nested PCR are shown in Fig 3B

. The identity of the bands was further confirmed to be that of the HPV-L1 region by sequencing (data not shown). The results of single-tube seminested were comparable with that of two-tube nested using plasmids with HPV genotype inserts. 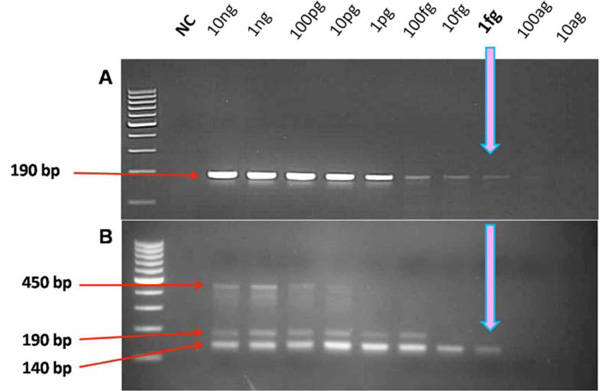 3.3.. Evaluation of Single-Tube and Two-Tube PCR on Clinical Samples

The results of HPV DNA detection in the cervical scrapings and buccal swabs by single-tube seminested and two-tube nested PCR are shown in Table 1 and Table 2 respectively. The results of our assay were comparable with that of two-tube nested PCR. Nineteen cervical swabs (63.3%) and 17 buccal swabs (56.7%) were found to be positive for HPV by single-tube PCR. With two-tube, 18 cervical samples (60%) and 19 buccal samples (63.3%) were positive for HPV. Analysis of the quality of DNA of the two buccal swabs positive by two-tube but negative by single-tube assay revealed low concentration of DNA as compared to other samples. The higher positivity in two-tube could also have been due to false positivity by cross contamination during nested step. In the cervical samples, the concentration of one discordant sample was relatively high as compared to other samples which may have resulted in a false negative result seen in the two-tube assay as explained above. This was a preliminary clinical evaluation of the assay we developed using a relatively small number of samples. We intend to carry out further assessment on more samples to better evaluate the single-tube seminested assay.

In this study, we have described an improved nested amplification system for HPV in which the reagents of both PCR rounds were included in a single tube to eliminate the risk of contamination in two-tube PCR at the nesting step. Further, as designing a system with short final amplification products greatly increases its amplification efficiency [18Baay MF, Quint WG, Koudstaal J, et al. Comprehensive study of several general and type-specific primer pairs for detection of human papillomavirus DNA by PCR in paraffin-embedded cervical carcinomas J Clin Microbiol 1996; 34: 745-.]; single-tube seminested gave the final amplification product of 190 bp which was less than half the size of MY09-MY11 product.

Single-tube seminested PCR was developed and evaluated for the detection of HPV DNA in plasmids with HPV inserts and clinical samples. Preliminary results show that our assay appears to be well suited for detecting HPV in cervical as well as buccal swabs. Further evaluation using larger number of samples is in progress. As this method is rapid, highly sensitive and has minimum cross contamination, it has a potential in screening high-risk patients and epidemiological studies.