Fig. (3) Relative 14C labeling of various phospholipids isolated from transformed strains fed with 14C acetate. Starting from a cell density of 0.1 (OD600) in 20 ml of glucose medium, cells of WTEV, WTPLA2, plbEV and plbPLA2 (as designated in Table 1) were labeled with 30µCi 14C-sodium acetate for 10 hours. Half of culture remained in glucose medium while the other half was induced in galactose medium for 5 hours. The total lipids were extracted and resolved by two dimensional thin layer chromatography and each of the phospholipids was quantified (see Materials and methodology). The proportions of 14C-labeled LysoPtdCho (relative to the total 14C phospholipids) are depicted using the Y axis scale on the right side, while the proportions of other 14C-labeled phospholipids are expressed using the Y axis scale on the left. The results are the means ±S.E of three experiments. 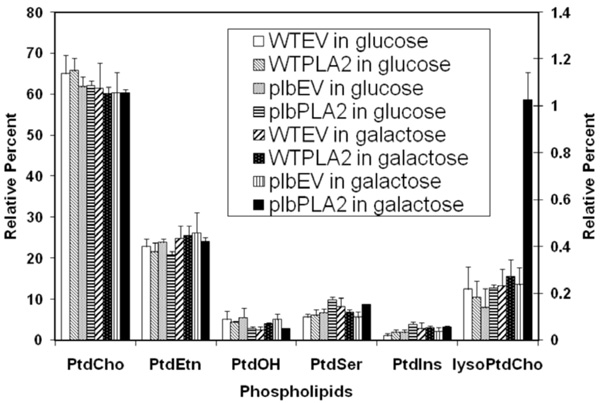