* Address correspondence to this author at the Department of Medical Microbiology, University of Zimbabwe, Harare, Zimbabwe; E-mail: Nyasha.Chinombe@gmail.com

The study was conducted from October 2013 to May 2014 in Zimbabwe, a country in Southern Africa. Fresh cow dung samples were collected around the country from cattle in districts of Bikita, Bindura, Chihota, Chitungwiza, Chivhu, Chiredzi, Chiweshe, Domboshava, Epworth, Goromonzi, Hatcliffe, Karoi, Kuwadzana, Lupane, Masvingo, Mavambara, Mazowe, Mhondoro, Mount Hampden, Mufakose, Musami, Murombedzi, Msengezi, Mvurwi, Norton, Seke, Snake Park, Zvimba and Zvishavane, The cow dung samples were stored at 4 oC before processing. All the samples were first decontaminated using 4% sodium hydroxide before culture to kill all other microorganisms save mycobacteria. One millitre of each of the decontaminated cow dung samples was inoculated on Peizer’s TB solid medium. The cultures were incubated at 37°C and examined daily for up to four weeks until visual colonies were seen. Smears of potential mycobacteria colonies were stained using the Ziehl-Neelsen. Colonies which were AFB positive were purified by subculturing on Peizer’s TB medium. Pure colonies from each culture were kept at -80 °C in 200 µl of distilled water until DNA extraction.

DNA was extracted from Mycobacteria culture isolates using Quick-gDNA™ MicroPrep (Zymo Research Corp, U.S.A) according to manufacturer’s recommendations. Briefly, bacterial isolates previously stored in 200 µl distilled water at -80°C were thawed at room temperature and 800 µl of Genomic Lysis Buffer added. After lysis, the supernatants were transferred to the Zymo- SpinTM columns and centrifuged at 10 000 g for 1 minute. The columns were then washed with 200 µl of DNA Pre-wash buffer, followed by 500 µl of gDNA Wash buffer. The DNA was eluted from the columns using 50 µl of DNA Elution buffer. The extracted Mycobacterium DNA was stored at -20°C until polymerase chain reaction of the 16S rRNA gene.

PCR products with strong bands of the expected size (approximately 460 bp) were selected and sent to Inqaba Biotechnical Industries (South Africa) for sequencing. DNA sequence data (chromatographs and sequences) for all the samples were sent back by email for analysis. DNA sequences were analyzed using the Geneious Basic program (Biomatters, USA) and BLAST programs. Different Mycobacterium species were identified by comparison of the alignment with sequences in the Genbanks.

During the study, a total of 134 cow dung samples were collected from several districts of Zimbabwe (see Fig.(1 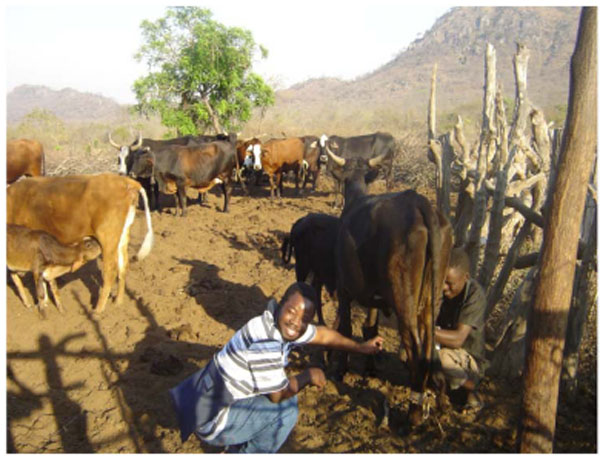 ) for one of the study sites). Out of all the samples (n = 134) that were cultured successfully, only 49 were positive by AFB smear. These were successfully sub-cultured to generate pure isolates. Different colony colours were observed on the Peizer’s TB medium (Fig. 2 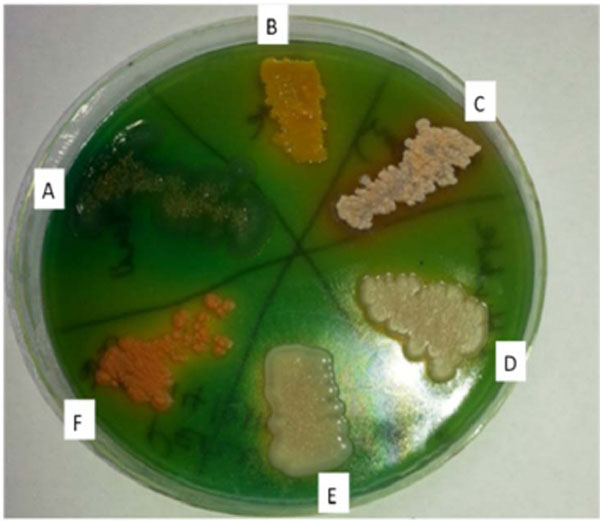 ). The colonies had various types of morphology, with some being smooth, rough, and others shiny (Fig. 2 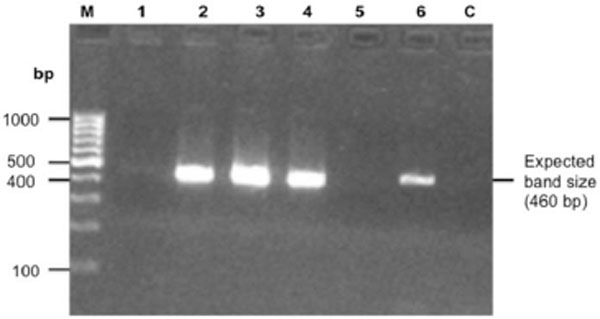 ). There was no amplification in 8 (16%) of the samples. Out of the 41 samples that showed amplification, 26 (63%) had strong PCR bands and were selected for DNA sequencing of the 16S rRNA gene. The 15 samples (37%) with faint bands, though of the expected size, were not sequenced.

DNA sequences of the 26 bacterial isolates were analyzed. A phylogenetic tree was constructed to check the closeness of the sequences (Fig. 4 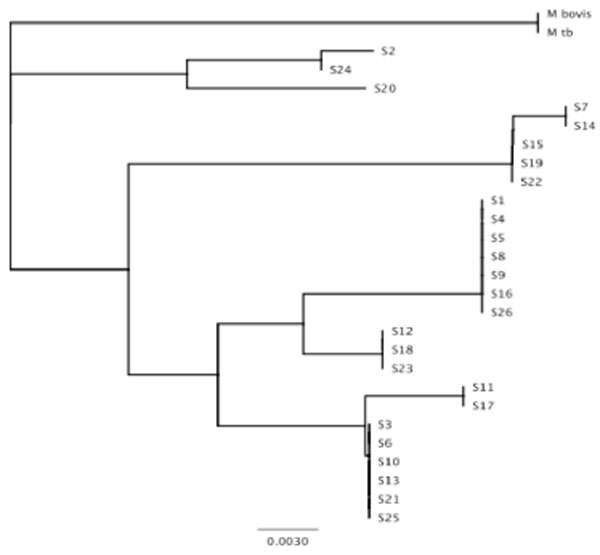 ). The samples were grouped into clusters based on the phylogenetic analysis (Table 1).

Molecular identification of Mycobacterium species (n = 26). The bacterial isolates were grouped into 7 clusters according to phylogenetic data.

) and this poses a high risk of zoonotic transmission of Mycobacterium species. The use of cow dung as floor polish, plastering and cooking is widely practiced in rural Zimbabwe and this can be another source of infection in humans by Mycobacterium species. Humans can also get infected by consuming food products such as milk from infected livestock [8Franco MM, Paes AC, Ribeiro MG, et al. Occurrence of mycobacteria in bovine milk samples from both individual and collective bulk tanks at farms and informal markets in the southeast region of Sao Paulo, Brazil. BMC Vet Res 2013; 9: 85.
[http://dx.doi.org/10.1186/1746-6148-9-85] [PMID: 23618368] ].

The study was supported by the University of Zimbabwe, National University of Science and Technology and Government of Zimbabwe’s Central Veterinary Laboratory. Sequencing of 16S rDNA PCR products was done at Inqaba Biotech, South Africa.