A retrospective analysis of 148 consecutive primary fusions performed with the Acutrak 2 headless compression screw (n=107) or K-wires (n=41) was conducted. Healing was assessed clinically and radiographically at 6 to 8 weeks postoperatively.

In 89% of cases fusion had been achieved at 6 to 8 weeks postoperatively using the headless compression screw. 7 cases healed after 8 weeks. Secondary surgery with screw removal was required in 11 cases due to screw prominence, infection or non-union.

The purpose of this study is to compare KW and HCS for arthrodesis of the DIP of digits 2-5 and the IP of the thumb in regard to time to fusion, fusion rate, complications including infection, revision surgery and non-union.

A retrospective review of patients operated upon between January 2005 and December 2015 with fusion of a DIP or the IP has been included. The only exclusion criterion was prior arthrodesis. Of the 148 patients who met the inclusion criteria, 107 joints were operated upon with Acutrak 2 Headless Compression Screw (A2HCS) arthrodesis (Fig. 1 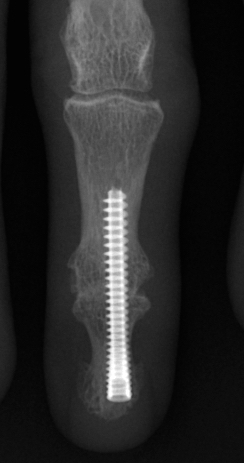 The surgical procedure has previously been described in several other papers. The surgical exposure of the joint was the same whether performing arthrodesis using KW or HCS. We used a dorsal H- or S-shaped skin incision. Subsequently, the tendon was cut, thus exposing the joint. As regards performing KW arthrodesis, we used a technique similar to the one described by Burton et al. [7Burton RI, Margles SW, Lunseth PA. Small-joint arthrodesis in the hand. J Hand Surg Am 1986; 11(5): 678-82.
[http://dx.doi.org/10.1016/S0363-5023(86)80011-9] [PMID: 3760494] ]. As regards performing HCS arthrodesis we used the technique described by Jean-Paul Brutus et al. [8Brutus JP, Palmer AK, Mosher JF, Harley BJ, Loftus JB. Use of a headless compressive screw for distal interphalangeal joint arthrodesis in digits: clinical outcome and review of complications. J Hand Surg Am 2006; 31(1): 85-9.
[http://dx.doi.org/10.1016/j.jhsa.2005.09.009] [PMID: 16443110] ]. Position of the KW arthrodesis was decided upon in agreement with the patient in slight flexion or straight alignment. When performing HCS arthrodesis the position was in always in straight alignment, as flexion is difficult to achieve when using a screw.

A total of 100 patients representing 107 joints were treated with A2HCS. Of these, 95 joints (89%) went on to fusion within 8 weeks postoperatively. Seven joints fused after 8 weeks postoperatively. Total fusion rate was 95%. Five joints did not fuse. Of the 107 joints treated with the A2HCS, 11 joints received revision surgery. Five screws were removed due to prominence of the screw in the pulp of the digit. Four screws were removed due to non-union but later went on to fusion after KW arthrodesis. In one patient, the joint did not fuse but the patient declined any further surgery. Two screws were removed because of infection.

In the present study, arthrodesis using A2HCS resulted in faster fusion compared to KW but there was no difference in the total fusion rate. It has been stated that time to fusion is a key factor in a good arthrodesis [2Moberg E, Henrikson B. Technique for digital arthrodesis. A study of 150 cases. Acta Chir Scand 1960; 118: 331-8.
[PMID: 14423115] ]. The present study suggests that early fusion is achieved more frequently when using A2HCS as compared to KW. To the best of our knowledge, a comparison of KW and a compression screw was last published in 1977 [4Engel J, Tsur H, Farin I. A comparison between K-wire and compression screw fixation after arthodesis of the distal interphalangeal joint. Plast Reconstr Surg 1977; 60(4): 611-4.
[http://dx.doi.org/10.1097/00006534-197710000-00019] [PMID: 909 973] ]. They treated 15 digits in each group and found that earlier mobilisation and return to work was achievable using the compression screw. Due to the relatively small number of joints treated and the fact that they used a headed compression screw, comparison of their results with the present study should be made with some caution.

In the same review, it is also stated that using a compression screw for small joint arthrodesis comprises complications that are solely related to this technique. Thus, screw migration, fracturing of a bone [9Konan S, Das A, Taylor E, Sorene E. Distal interphalangeal joint arthrodesis in extension using a headless compressive screw. Acta Orthop Belg 2013; 79(2): 154-8.
[PMID: 23821966] ] and screw prominence [10Kocak E, Carruthers KH, Kobus RJ. Distal interphalangeal joint arthrodesis with the Herbert headless compression screw: outcomes and complications in 64 consecutively treated joints. Hand (N Y) 2011; 6(1): 56-9.
[http://dx.doi.org/10.1007/s11552-010-9295-3] [PMID: 22379439] ] necessitating further surgery have been reported after the use of headless compression screws. In 2012, Villani et al. [5Villani F, Uribe-Echevarria B, Vaienti L. Distal interphalangeal joint arthrodesis for degenerative osteoarthritis with compression screw: results in 102 digits. J Hand Surg Am 2012; 37(7): 1330-4.
[http://dx.doi.org/10.1016/j.jhsa.2012.02.048] [PMID: 22537584] ] published on a series of 102 digits which all went on to union after treatment with headless compression screws. They stated that a learning curve is related to this technique. Two screws (2%) in that study were removed due to hardware prominence. Out of 19 surgeries performed previously at the same institution, seven screws were removed due to mal-placement of the screw. These cases, however, were excluded because of varying levels of experience amongst surgeons and more surgeons being involved. In our study, five screws (5%) were removed because of screw prominence. All cases were operated upon by experienced surgeons and we did not exclude any cases. Consequently, our relatively high percentage of screw prominence may partly reflect a learning curve for the procedure.

In the present study, KW were removed in 24 joints of a total of 41 procedures. Seventeen of these cases were handled in our outpatient clinic while in seven cases the wires were removed in the theatre. All wires were removed under local anaesthesia. We consider the removal of wires an inherent part of KW arthrodesis. Nonetheless, the removal of wires entails some discomfort to patients, thus being a disadvantage compared to modalities where hardware removal is uncommon. We suggest that future studies report the prevalence of wire removal when performing KW arthrodesis.

Conclusion from this study must be drawn with considerable caution due to the retrospective and non-randomised design. There is a potential for selection bias due to the fact that each surgeon chose a procedure type on an individual basis.

Future randomised studies are needed to overcome this risk of bias and confounding.

This study found fusion to be achieved earlier when using A2HCS compared to using KW. However, total fusion rates were similar. Complication rates were low in both modalities.

No animals/humans were used in this study that are basis of this research.