Chondral injury after arthroscopic meniscal suture repair is rare. We present a case of chondral injury due to the migration of suture after meniscal repair. The aberrant suture that remained temporarily at the medial tibiofemoral joint may have led to the chondral lesion of the femoral medial condyle and the tibial medial plateau at the weight-bearing portion.

An 18-year-old female had complained of right knee pain and a giving way sensation 1 year previously. Her clinical diagnosis was an Anterior Cruciate Ligament (ACL) injury and a lateral meniscus tear. She underwent ACL reconstruction (Fig. 1 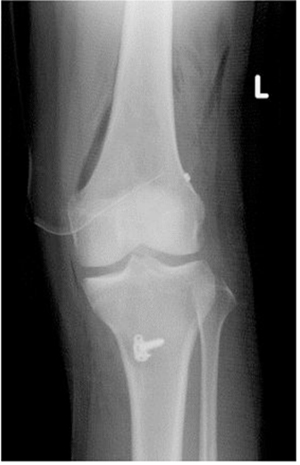 ) and lateral meniscal suturing with nonabsorbable sutures that were knitted into a mesh (Fig. 2 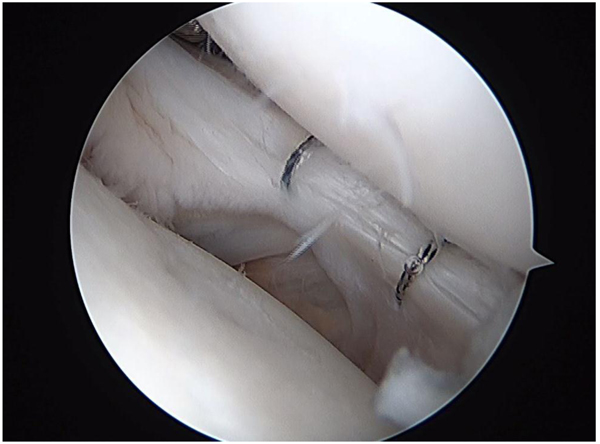 ). After the operation, her knee function was improved.Six months later, she suddenly complained of right knee pain, crepitation, and a giving way sensation.


A physical examination revealed no swelling, effusion, or medial joint line tenderness in the right knee. The range of motion was between 0° and 145°. McMurray tests for medial meniscus were positive. The results of a Lachman test, anterior and posterior drawer tests, and varus and valgus stress tests were normal. The patient had no patellofemoral symptoms. Magnetic Resonance Imaging (MRI) showed a reconstructed ACL and medial meniscus tear and synovial plica in the suprapatellar pouch (Figs. 3A 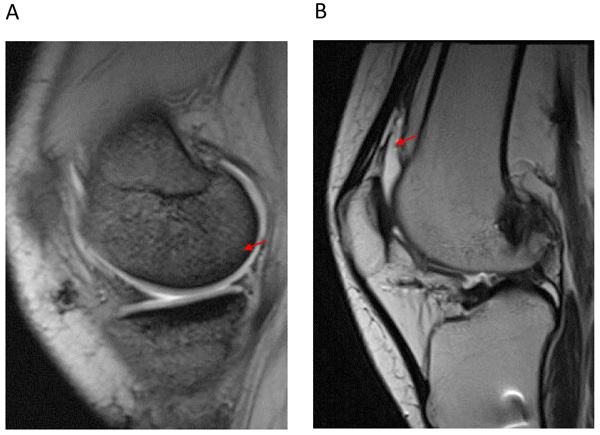 ). There were no bone bruises on the femoral medial condyle or the tibial medial plateau.

Arthroscopy revealed a reconstructed ACL, a tear in the posterior third of the medial meniscus, new synovial plicae, and one suture that was used to repair the lateral meniscus in the suprapatellar pouch. The suture appeared to be connected to synovial plicae (Fig. 4A 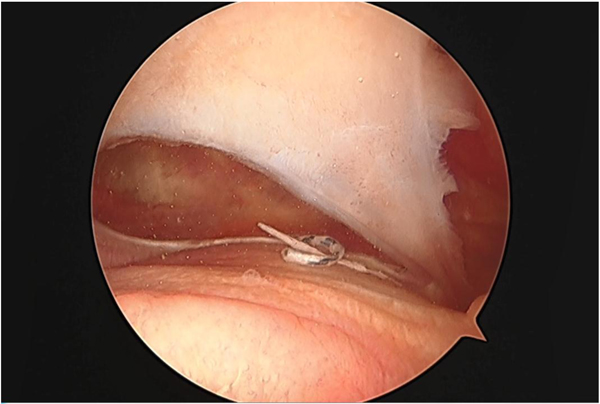 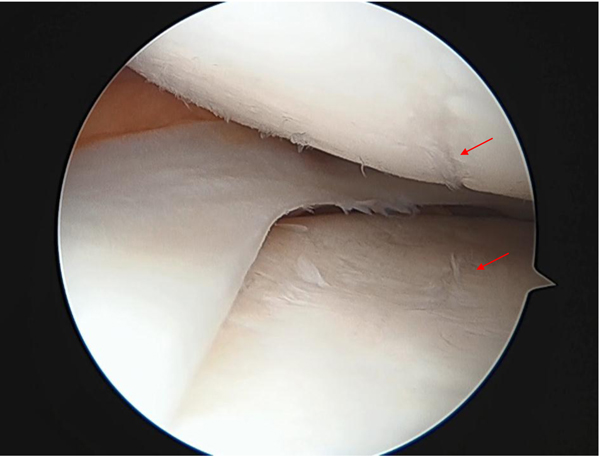 ). In the posterior portion of the lateral meniscus, a horizontal tear remained (Fig. 4C 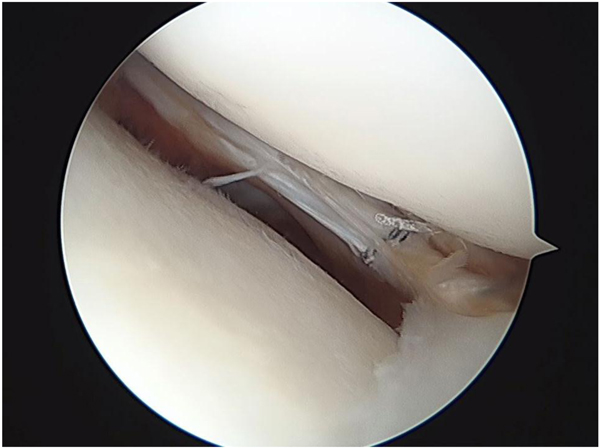 ) . The suture and plica were resected by a punch. The medial meniscal repair was performed with non-absorbable sutures and Fast-Fix adhesive. The horizontally torn posterior third of the lateral meniscus was resutured.

Postoperatively, the patient was kept on a non-weight bearing schedule for 2 weeks, and a range motion was allowed after 2 weeks. Activity was limited for 1 month. The knee crepitation disappeared after surgery, and the patient was able to resume daily activities. The Lysholm knee score was 94.

There are two main methods to treat meniscal tears: menisectomy or meniscal sutures. However, once the menscus has been removed, secondary osteoarthritic changes occur due to the loss of meniscal function, including alterations in load distribution, impact absorption, and articular sliding and stabilization. To repair the meniscal tear, the inside-out, outside-in, and all-inside techniques can be used. We often use the inside-out and all-inside techniques. In the inside-out technique, 2.0 or 0 nonabsorbable sutures are often used. In the all-inside technique, nonabsorbable sutures, meniscus arrows or staples, and bioabsorbable implants are often used. Good-to-excellent results can be expected from the meniscal repair. Johnson reported that 76% of the cases were successful [6Johnson MJ, Lucas GL, Dusek JK, Henning CE. Isolated arthroscopic meniscal repair: a long-term outcome study (more than 10 years). Am J Sports Med 1999; 27(1): 44-9.
[http://dx.doi.org/10.1177/03635465990270011501] [PMID: 9934417] ], and Rubman that 88% were clinically asymptomatic [7Rubman MH, Noyes FR, Barber-Westin SD. Arthroscopic repair of meniscal tears that extend into the avascular zone. A review of 198 single and complex tears. Am J Sports Med 1998; 26(1): 87-95.
[http://dx.doi.org/10.1177/03635465980260013301] [PMID: 94 74408] ]. Reported complications after meniscal repair by the inside-out technique include: infection, arthrofibrosis, nerve injury, vascular injury, and chondral injury [1Small NC. Complications in arthroscopic meniscal surgery. Clin Sports Med 1990; 9(3): 609-17.
[PMID: 2199072] -5Grant JA, Wilde J, Miller BS. Comparison of inside-out and all-inside techniques for the repair of isolated meniscal tears: A systematic review. Am J Sports Med 2011.
[PMID: 21737837] ]. However, chondral injury is a rare complication. Complications involving chondral injury after using biodegradable meniscus arrows have been reported [8Song EK, Lee KB, Yoon TR. Aseptic synovitis after meniscal repair using the biodegradable meniscus arrow. Arthroscopy 2001; 17(1): 77-80.
[http://dx.doi.org/10.1053/jars.2001.7800] [PMID: 11154373] -10Seil R, Rupp S, Dienst M, Mueller B, Bonkhoff H, Kohn DM. Chondral lesions after arthroscopic meniscus repair using meniscus arrows. Arthroscopy 2000; 16(7): E17.
[http://dx.doi.org/10.1053/jars.2000.9244] [PMID: 11027775] ]. Subcutaneous migration of meniscal arrows is a well-documented complication. Chondral injury due to migration inside the knee joint is also a serious complication. On the other hand, chondral injury due to the migration of suture after meniscal repair, as in the present case, has not often been reported. Kelly reported chondral injury after arthroscopic meniscal repair using the outside-in Mulberry knot suture technique [11Kelly JD IV, Ebrahimpour P. Chondral injury and synovitis after arthroscopic meniscal repair using an outside-in mulberry knot suture technique. Arthroscopy 2004; 20(5): e49-52.
[http://dx.doi.org/10.1016/j.arthro.2004.03.022] [PMID: 151 22157] ]. In the present case, we used nonabsorbable sutures that were knitted into a mesh. This suture had a larger contact area in the meniscus than conventionally used sutures. This meniscal suture was made and sold only in Japan. Presently, this meniscal suture kit is not being produced. However, we have used other sutures to repair the meniscal tears. Therefore, it is necessary to be careful to avoid this complication.

To prevent this complication, we consider that it is important to use thinner suture (2.0) and to prevent the knot of the suture from loosening by tying off a few more times and not cutting off the suture so close to the knot.