A 28-year-old female presented with left knee pain, crepitation, gait disturbance and a “giving way” sensation. She had undergone anterior cruciate ligament (ACL) reconstruction at another hospital 12 years back. After the surgery, she had occasional pain, but no giving way or locking sensation in her knee. Her history after the surgery was unremarkable.

Physical examination revealed swelling, effusion and medial joint line tenderness in the left knee. The range of motion was between 10° and 120°. McMurray tests for medial meniscus were positive. The results of posterior drawer tests, and varus and valgus stress tests were normal, but the Lachman test and anterior drawer test were positive. The patient had no patellofemoral symptoms. Magnetic resonance imaging (MRI) demonstrated a reconstructed ACL, medial meniscus tear, and effusion in the suprapatellar pouch (Figs. 1A 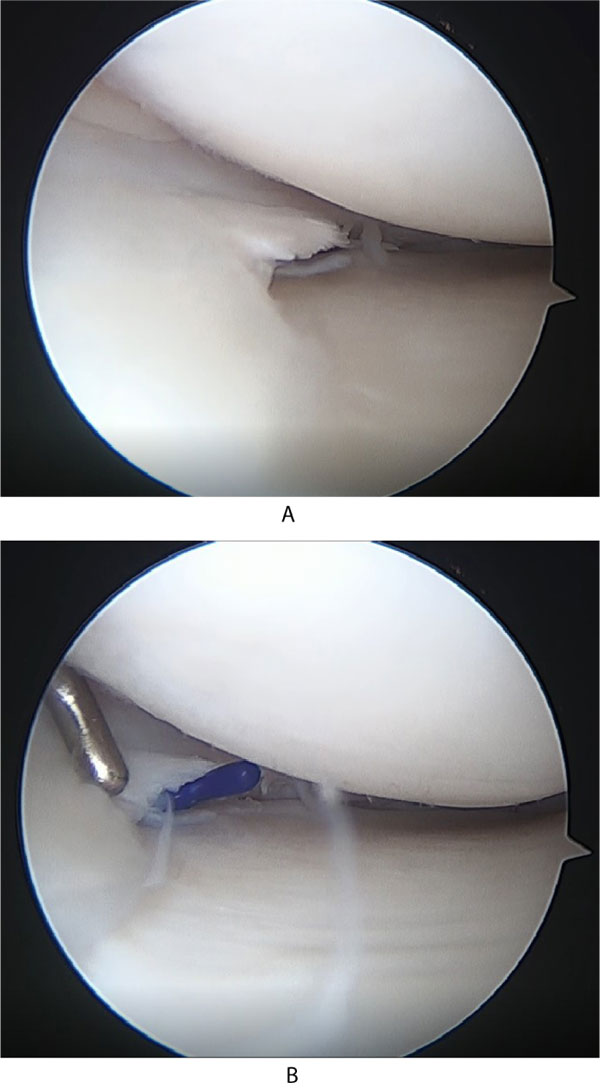 ). The chondral lesion of the femoral medial condyle and the tibial medial plateau were found at the weight-bearing portion. The implant was resected with a punch.

The knee symptoms disappeared immediately after surgery and the patient was able to resume daily activities in a half-year. The Lysholm knee score was 85.

The all-inside meniscal repair technique is a reliable treatment option. The choice of meniscal repair implants may lead to potential complications even in long-term clinical follow-up after ACL reconstruction and combined meniscal repair.

PRISMA Guideline and methodology were followed.

We have obtained consent to publish from the patient.