LCH of the Scapula in a 2-Year-Old Masquerading as an ABC: A Case Report and Literature Review

We describe a unique case of Langerhans Cell Histiocytosis (LCH) arising in the scapula of a 2-year old male child masquerading as an aneurysmal bone cyst (ABC) at clinical presentation and on imaging. Scapular involvement is only occasionally noted in LCH cases. Solitary bone involvement in our patient’s age group is uncommon in LCH without multi-organ involvement. Careful pathologic examination and immunohistochemistry was crucial in establishing this diagnosis due to the presence of a solitary lesion with fluid-fluid levels.

A 2-year-old male child with no significant medical history presented to the pediatrician with 1-month of left shoulder pain, forward positioning of the shoulder, and a protuberant scapula. There was no history of trauma, congenital defects, or other symptoms. Initial radiographs revealed a lytic, expansile, radiolucent scapular body bone lesion (Fig. 1 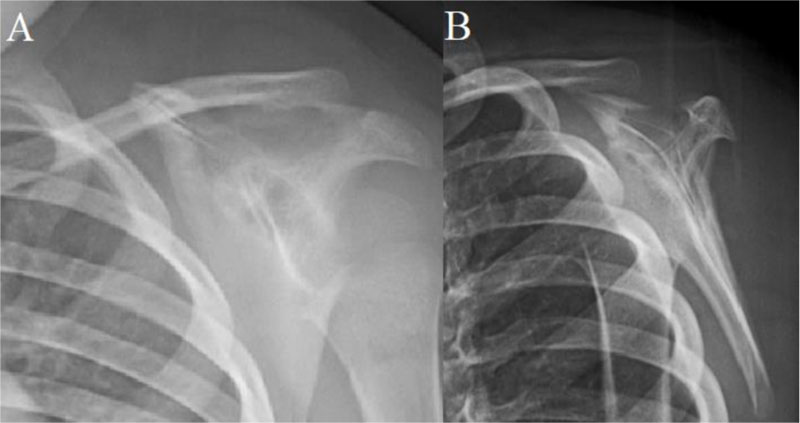 ). After orthopedic oncology consultation, coordination of MRI and open biopsy under a single episode of general anesthesia (GA) was planned [7Haupt R, Minkov M, Astigarraga I, et al. Langerhans cell histiocytosis (LCH): Guidelines for diagnosis, clinical work-up, and treatment for patients till the age of 18 years. Pediatr Blood Cancer 2013; 60(2): 175-84.
[http://dx.doi.org/10.1002/pbc.24367] [PMID: 23109216] ]. MRI with and without Gadolinium revealed the presence of an expansile, multi-loculated, septated lesion involving the scapular body and spine (Fig. 2 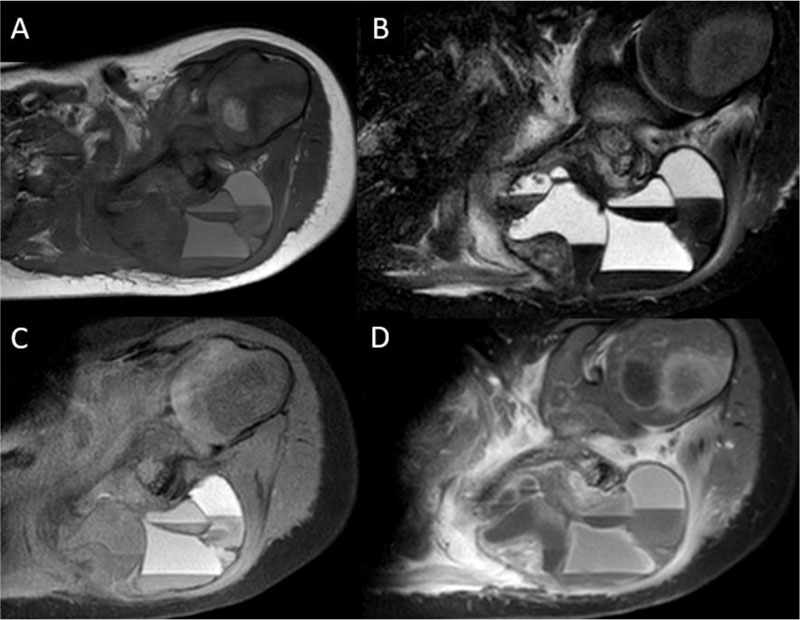 ). Multiple fluid-fluid levels were noted within the lesion, reflecting intralesional blood products. No solid component was apparent on any MRI images. Perilesional intraosseous edema in the surrounding scapula and adjacent periscapular muscles was noted, suggesting either occult pathologic fracture or secondary ABC associated with primary chondroblastoma, LCH, osteoid osteoma/osteoblastoma, or infection [8Yildiz C, Erler K, Atesalp AS, Basbozkurt M. Benign bone tumors in children. Curr Opin Pediatr 2003; 15(1): 58-67.
[http://dx.doi.org/10.1097/00008480-200302000-00010] [PMID: 12544273] ]. Immediately following MRI, the patient was transported to the OR where an open biopsy was planned. Under general anesthesia, fluoroscopy was used to localize the bone lesion and plan the incision. A 3cm incision was made longitudinally over the body of the scapula extending cephalad to the scapular spine and dissection carried down to the bone. A scalpel blade was utilized to enter the almost non-existent outer cortex. A 1 cm diameter window was created for the biopsy. The tissue obtained consisted of multiple fragments of red-brown tissue. Frozen section favored ABC based on the presence of bloody and cystic areas associated with histiocytes, bland fibroblasts, osteoclast-like giant cells, and hemosiderin deposition (Fig. 3A 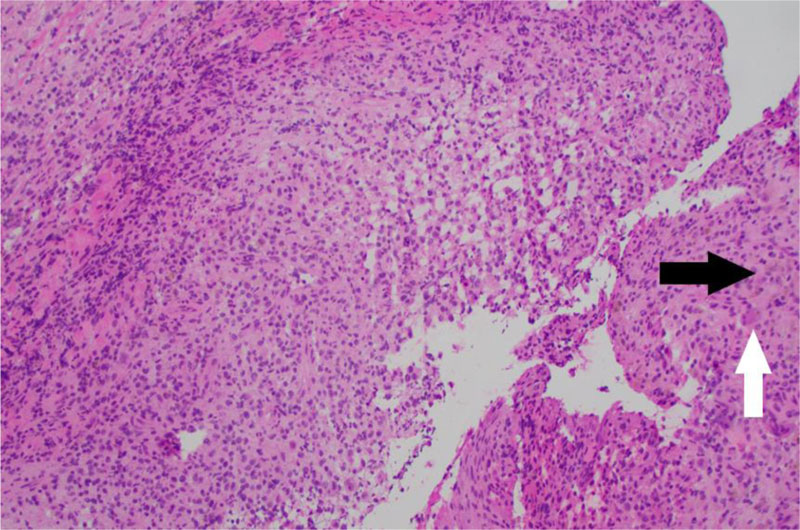 ). The incision was then extended and the entire lesion was completely curetted, leaving only a rim of bone around the native scapula. A high speed bur was used to further extend the margins around the lesion to ensure it was entirely removed. During intralesional curettage, the gross appearance was again felt to be consistent with ABC given the findings of blood-filled pools separated by septations. The resulting defect was filled with synthetic bone filler (Cerament, BoneSupport, Inc) and defect filling was confirmed fluoroscopically . 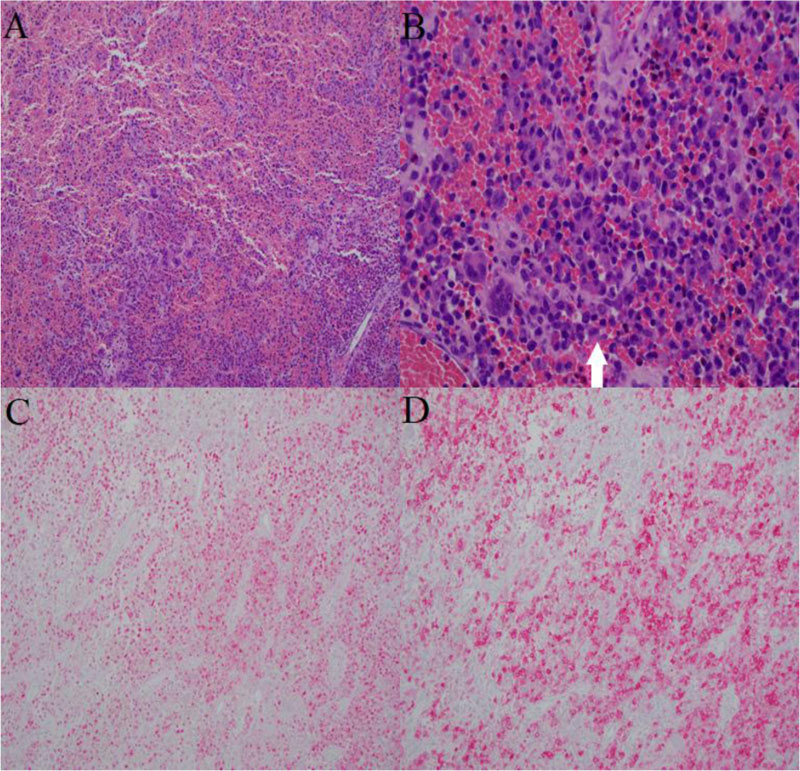 Subsequent evaluation by Pediatric Oncology included staging with skeletal survey and laboratory work. All imaging and laboratory analysis suggested no additional LCH. Observation was elected going forward. At three months post-operation, the patient had no pain, was participating unrestricted in all activities, and had regained full active range of shoulder motion without local tenderness or masses. Three-month scapular radiographs showed graft material incorporation without any recurrence (Fig. 5 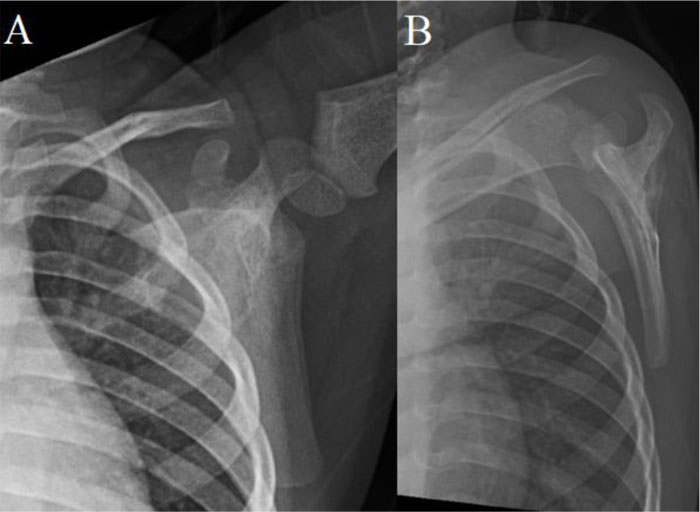 Table I
Bone Lesions with Fluid-Fluid Levels on MRI.

Table 2
Mnemonic for Musculoskeletal Lesions with Fluid-Fluid Levels on MRI.

Only the final histology review provided a firm diagnosis of LCH. The change in diagnosis was based upon morphologic identification of the characteristic Langerhans cells confirmed by expression of CD1a and S100. In retrospect, the tissue fragments on the frozen section slides with the loose Langerhans cell histiocytic clusters admixed with osteoclast-like giant cells and hemosiderin deposition were originally misinterpreted at the time of the frozen section evaluation as being fibrous septae with bland fibroblasts and osteoclast-like giant cells similar to those seen in ABC. Both frozen section artifacts and the unusual presence of intra-tumoral blood-filled cystic spaces played a significant role in misinterpretation at the time of the frozen section evaluation. The presence of blood lakes within the tumor ultimately explained the fluid-fluid levels and septations noted on MRI.

Other reports of similar presentations are rare. Only two cases have been reported. One 8-year-old girl was discovered to have an occipital bump. MRI showed an expansile, destructive, and lytic mass located with multiple fluid-filled levels favoring an ABC as in our case. However, upon excision and biopsy, the characteristic features of LCH were found. [45Krishnan C. Langerhans cell histiocytosis masquerading as aneurysmal bone cyst. J Clin Oncol 2011; 29(24): e688-90.
[http://dx.doi.org/10.1200/JCO.2011.35.5875] [PMID: 21709198] ] The second report involved a 2-year-old male patient with ABC secondary to LCH, and on the occiput. [46Roncaroli F, Consales A, Galassi E, Bernardi B, Valeri B. Occipital aneurysmal bone cyst secondary to eosinophilic granuloma. Pediatr Neurosurg 2001; 35(2): 103-6.
[http://dx.doi.org/10.1159/000050399] [PMID: 11549922] ] Thus, the current report is the first documented instance of LCH masquerading as an ABC outside of the skull. In conclusion, we present an unusual case of LCH with extensive hemorrhage mimicking primary ABC on imaging modalities. Hemorrhagic LCH is an entity that should be considered in the differential diagnosis of bone lesions with fluid-fluid levels. Pathologic examination and a thorough immunohistochemical workup play a vital role in establishing this rare and challenging diagnosis.

We have obtained consent to publish from the patient.

CARE guidelines have been used for conducting this research.