As the adolescents lack necessary social and communicational skills, the present study aimed to educate to say ‘no’ to reject high-risk suggestions through the use of role play model.

In a field trial, 145 female students using randomized sampling were selected in Arak. The checklist made for saying ‘no’ was completed before, immediately and two months after the intervention for students. The study was conducted based on the skill of saying ‘no’ through role-play training method. Data were analyzed by descriptive and inferential statistical tests through SPSS.

The mean scores of skills of saying ‘no’ to reject high risk suggestions showed a significant difference among the subjects before, immediately and two months after intervention (respectively p=0.000, p=0.009)

The results indicate that the educational interventions of preventive behaviors are necessary for students to improve their skill of saying ‘no’. 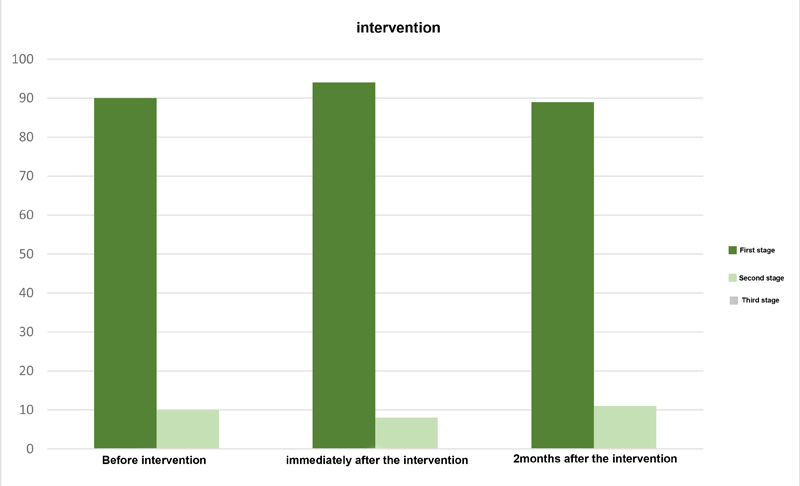 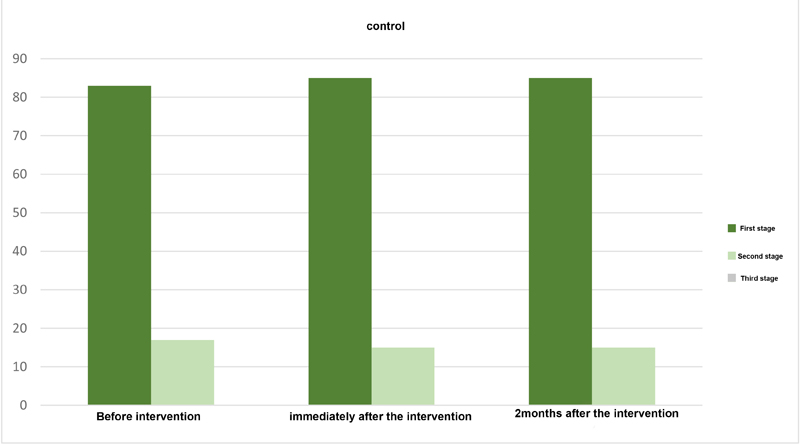 ). The assessment was mainly done in the first time of the role-play and none of the research units was evaluated for the third time.

Table 1
Mean and Standard deviation scores of saying "no" skill between the intervention and the control group before, immediately and two months after the intervention.

Moreover, the results of Nichols et al. with the aim of determining the ability to reject, showed that providing logical and detailed discussions for the rejection strategy was effective. The results of the above studies are consistent with ours in relation to the lack of ability to say "no" because the training led to the increased skill of saying "no" in the mentioned researches and the present research [32Nichols T BS, Graber J, Brooks-Gunn J, et al. Refusal skills ability: An examination of adolescent perceptions of effectiveness. Department of public health education university north caronila 2010; 31(3): 127-37.]. The above studies were consistent with the results of the present study. It seems that due to the fact that the skills of saying "no" were trained in detail with the participation of students in the present study and that the students learned the skill to say "no" fully and effectively with all the four components using the role-playing method in groups of 2, 3 or 4, the role-play of each student was discussed by the group and its strengths were enhanced to fully and effectively utilize the skills, leading to an increase in this skill in the case group. In the control group, this skill has increased, which seems to be due to various reasons, including the use of mass media particularly radio and television, family and school education, personal experiences, students' curiosity and exchange of views with each other. Besides, despite the fact that the case and control groups were randomly selected from two schools in one area similar in terms of cultural, economic, and social context without significant difference in demographic information, the parents’ level of education in the control group was higher than the case group and the number of children in the case group was more than the control group. Considering the random sampling method, the existence of a significant difference between the parents' education and the number of children in families of research units in the case group was out of control of the researcher. The results of this study also showed that there was no significant intergroup difference in pretest between case and control groups in terms of saying "no" skill and that the score of saying "no" was higher in the control group. In the stage immediately and two months after the intervention, the score of saying "no" skill in the case group had a higher score, which implies the effectiveness of the training. Another case is that to reduce the observation error by the researcher, the role-playing assessment was performed in three stages. Based on the results presented in Figs. (1

), the majority of students have done role-playing in the first performance. This possibility of evaluation during the three steps eliminates the error of the evaluator, which emphasizes the accuracy of information obtained.

When a person is worth by oneself, can take on an active role in the social group more than others to freely and effectively express what they want and they resist the belief pressure of others, using training methods such as role-playing where a new behavior is expected, this active role is likely to be provided and will affect the skill of rejecting risky suggestions among students, and this educational method can be easily implemented and applied as a preventive and therapeutic strategy in educational centers for children and adolescents. Considering that the follow-up period of the effect of this intervention method is short, it is suggested that the present study be pursued with more sessions and that the continuation of training, i.e., the repetition of education be done in different intervals as a supportive step for more efficiency.

ETHICS APPROVAL AND CONSORT TO PARTICIPATE

The study was approved by the ethical committee of Isfahan University of Medical Sciences, Iran with approval No. 328960.

Informed consent was obtained from all individual participants included in the study.

The data that support the findings of this study are available from [Isfahan University of Medical Sciences]. Restrictions apply to the availability of these data,.

This article is part of a research project number 389260 of Isfahan University of Medical Sciences that supported this project.

This article has been taken from a part of the thesis approved by the Deputy Minister for Research and Technology, Isfahan University of Medical Sciences whose sampling was conducted in Arak.