The translationally controlled tumor protein (TCTP) was originally found in tumor tissue, and later found in other tissues. Initially, TCTP was considered a kind of growth-associated protein. Recent studies have shown that TCTP has many biological functions.

We constructed a yeast expression vector containing the CsTCTP1 gene. The CsTCTP1 coding sequence was inserted into a pGBKT7 vector as a bait protein and then transformed into the Y2HGold yeast stain.

We found that CsTCTP1 protein had no cytotoxic effect and could not be self-activated. The constructed bait expression vector can be used in the subsequent yeast two - hybrid detection system.

Protein - protein interactions is an important way to reveal the new role of the proteins. Yeast two-hybrid is a common method for protein interaction screening. Y2HGold yeast stain is a common stain that was used in Yeast two-hybrid system, Y2HGold was constructed of four reporter genes--ADE2, AUR1-C, HIS3 and MEL1 in GAL4 UASs (GAL4 upstream activating sequences) and downstream of the promoter through genetic engineering. GAL4 can specially bind with promoter and activate the downstream reporter gene expression. In this study, the coding sequence of CsTCTP1 was amplified. The PCR product was cloned into the pGBKT7 vector to generate pGBKT7-CsTCTP1, and then the bait vector was transformed into Y2HGold yeast stain. Cytotoxicity and self-activation were detected. On this basis, we can further screen proteins interacting with cucumber TCTP protein by yeast two-hybrid system, building networks of protein interactions, for understanding its role in the cell.

Cucumber seedlings were Jinyan 4th. Cucumber seeds were sterilized with 50% NaClO 15min and 75% ethyl alcohol for 45s. The sterilized seeds were germinated on a solid MS medium in a growth chamber at 24°C with light intensity of 40 lux. Seedlings with two true leaves were carefully transferred into Soil matrix, and then grown in a greenhouse.

Primer pairs were designed using Primer 5.0 software and synthesized by Shanghai Biological Engineering Co., Ltd. The primers used in this study are listed in Table 1.

The Bait Vector Construction and Transformation

Transformation of Y2HGold and Self-Activation Detection

CsTCTP1 gene PCR amplification products and cycle products were detected by 1% agarose gel electrophoresis which showed that the specific fragment was about 500 bp, consistent with that expected (Fig. 1 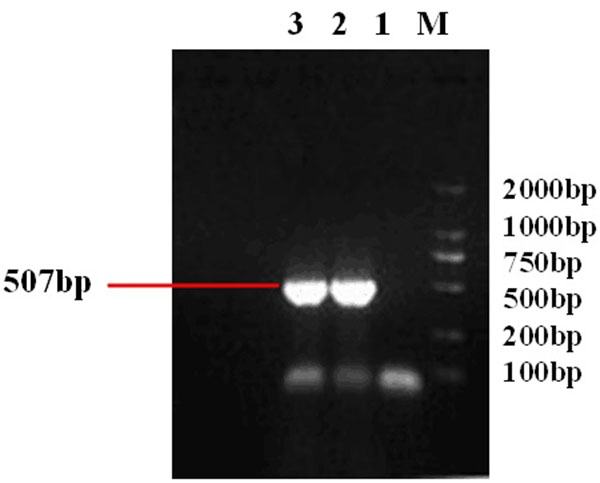 To construct the recombinant bait vector, we recycle the small fragments of pMD18-T-CsTCTP1 and large fragments of pGBKT7 plasmid after double digest with EcoR I and BamH I. The colony PCR products of recombinant plasmid pGBKT7-CsTCTP1via agarose gel electrophoresis analysis showed 507 bp of the target gene band (Fig. 2

). Sequencing results showed that the gene fragments was consistent with the target gene sequence in GenBank (Fig. 3 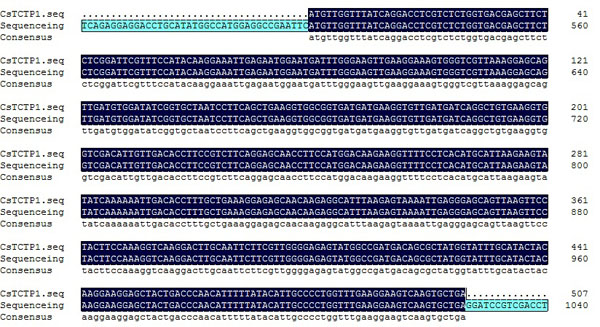 To detect whether CsTCTP1 protein has cytotoxic or self-activation, we transformed pGBKT7-CsTCTP1 bait expression vector into Y2HGold yeast stain, and incubated it in SD/-Trp, SD/-Trp-Leu and SD/-Trp-His-Ade medium at 30°C. The results showed that pGBKT7-CsTCTP1 and pGBKT7 stain could grow on SD/-Trp medium. The yeast growth curve of pGBKT7-CsTCTP1 transformants was the same as pGBKT7 transformants. Both of transformants could not grow on SD/-Trp-Leu and SD/-Trp-His-Ade medium, which indicated that CsTCTP1 protein had no cytotoxic and no self-activation (Figs. 4 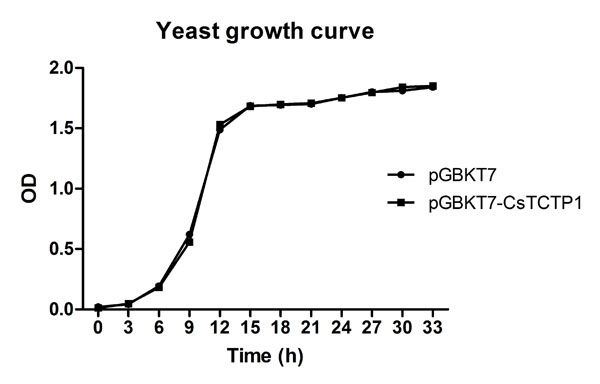 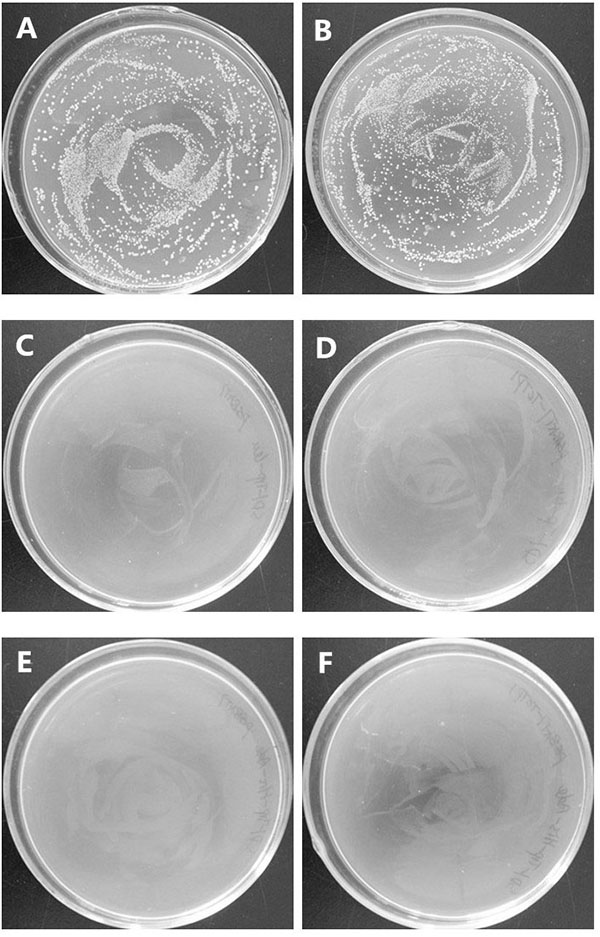 ) which could lay the foundation for screening CsTCTP1 interacting target proteins using the yeast two-hybrid.

Brioudes et al. conducted a positive and negative identification of the TCTP gene of Arabidopsis thaliana. It was proved that TCTP was related to growth, and the TCTP gene of Drosophila was transformed into the transgenic Arabidopsis thaliana knocked out of TCTP gene, its growth rate can be restored, indicating that TCTP gene has the same functions both in plants and animals [19Brioudes F, Thierry AM, Chambrier P, Mollereau B, Bendahmane M. Translationally controlled tumor protein is a conserved mitotic growth integrator in animals and plants. Proc Natl Acad Sci USA 2010; 107(37): 16384-9.
[http://dx.doi.org/10.1073/pnas.1007926107] [PMID: 20736351] ]. A recent study showed that tobacco TCTP protein could interact with ethylene receptor tobacco histidine kinase1 enhancing plant growth through promotion of cell proliferation. Our study found that cucumber TCTP may have important effect on powdery mildew resistance. We are able to detect whether cucumber TCTP protein could interact with other protein to exercise its functions. It has been found that the constructed bait expression vector has no toxicity and self-activating activity and can be used in the further experiments, which would lay a foundation for further studies of TCTP gene function and protein interaction mechanism in plants and animals.

Protein - protein interactions is an important way to study protein function, yeast two-hybrid protein interaction studies is a common method. In this work, the three-reporter gene was used to verify the cytotoxic effect and self-activation of fusion protein in yeast, which induced the false positive in further yeast two hybrid assays. Our study intends to make CsTCTP1 protein as a bait to screen the interaction proteins, and understand how the CsTCTP1 protein exercises their functions.

We have successfully amplified and purified of CsTCTP1 gene in cucumber coding sequence, and constructed the yeast two-hybrid yeast expression vector. The bait vector was successfully transformed to Y2HGold, which has no cytotoxic effect and no self-activation. Our study is a preparation for screening CsTCTP1 interaction proteins by yeast two-hybrid.