Rheumatoid arthritis is a chronic inflammatory autoimmune disease characterized by destruction of the joint cartilage and bone. Endothelial dysfunction (ED) in RA may be related to disease activity. Our objective is to explore serum levels of endothelial cell-specific molecule-1 (ESM-1) as a biomarker for RA disease activity.

A cross-sectional study was carried out and included 83 adult patients with RA, in addition to 20 healthy subjects (age and sex-matched) as a control group. Based on Disease Activity Score in 28 joints (DAS-28), the patient's group was subdivided into four subgroups(remission, mild, moderate and severe disease activity state). The demographic & clinical data, BMI, DAS-28 and Serological assessment [Erythrocyte Sedimentation Rate (ESR), CRP, Rheumatoid Factor (RF) and Anti-Citrullinated Peptide Antibody (ACPA)] were recorded. ESM-1was assayed for all participants.

ESM-1 could be a biomarker for RA disease activity.

Our cross-sectional study was designed to include 83 adult patients with RA from OPC of rheumatology and immunology clinic, Mansoura University hospitals from June to Dec. 2016 (RA patients were identified who satisfied the 2010 ACR diagnostic criteria) [16Aletaha D, Neogi T, Silman AJ, et al. 2010 rheumatoid arthritis classification criteria: An American College of Rheumatology/European League Against Rheumatism collaborative initiative. Ann Rheum Dis 2010; 69(9): 1580-8.
[http://dx.doi.org/10.1136/ard.2010.138461] [PMID: 20699241] ]. Exclusion criteria included the history of cancer, any history of cardiovascular disorders, hematological abnormality, any acute or other infection, a granulomatous chronic disease, Inflammatory Bowel Diseases (IBD), a metabolic disease, other autoimmune disorders, DM and anti-TNF usage (anti-TNF therapy). The study protocol had an approval from the Ethics Committee of the School of Medicine, Mansoura University (R1/16.10.06). The study cohort was divided into four subgroups according to DAS-28 score: 15 patients in remission (ACR/EULAR 2011 remission criteria [17Firestein GS. Evolving concepts of rheumatoid arthritis. Nature 2003; 423(6937): 356-61. View Article: Google Scholar: PubMed/NCBI.
[http://dx.doi.org/10.1038/nature01661] [PMID: 12748655] ] (DAS-28 < 2.6), 15 patients with low disease activity (DAS28: 2.6 --3.2), 38 patients with moderate disease activity (DAS-28: 3.2--5.1) and 15 patients with high disease activity (DAS-28 > 5.1). In addition to 20 age and sex matched healthy subjects, were included as a control group. All demographic & clinical data, BMI, Disease Activity Score in 28 joints (DAS-28) and Serological assessment comprised Erythrocyte Sedimentation Rate (ESR), CRP, Rheumatoid Factor (RF) and Anti-Citrullinated Peptide Antibody (ACPA) were recorded. The Health Assessment Questionnaire Disability Index (HAQ-DI) was consisted of 20 questions regarding the limitations patients experience in performing daily physical activities [18Rau R, Herborn G. A modified version of Larsen’s scoring method to assess radiologic changes in rheumatoid arthritis. J Rheumatol 1995; 22(10): 1976-82.
[PMID: 8992004] ] which were assisted for all patients in the same visit. Patients were asked how difficult it is to perform an activity on a scale of 0 (without any difficulty) to 3 (unable to do). Patients are also asked whether they need assistance or aids for the activity. X-ray scoring for disease activity using the modified version of the Larsen method [19Fries JF, Spitz P, Kraines RG, Holman HR. Measurement of patient outcome in arthritis. Arthritis Rheum 1980; 23(2): 137-45. [PubMed].
[http://dx.doi.org/10.1002/art.1780230202] [PMID: 7362664] ] was evaluated by rheumatologist and radiologist who assessed joint damage on plain films of the hand or wrist taken at the time of the study. This method analyses plain films of eight proximal interphalangeal joints, two interphalangeal thumb joints, 10 metacarpophalangeal joints, and both wrists. The degree of joint damage was rated as follows: grade 0, normal; grade 1, soft tissue swelling, joint space narrowing, and subchondral osteopenia; grade 2, bone erosion with destruction of < 25% of the joint space; grade 3, 26% to 50% joint space destruction; grade 4, 51% to 75% destruction; and grade 5, > 75% destruction of the joint space. The sum of all scores equaled 110 points.

To neutralize the effect of RF antibodies, HeteroBlock (omega Biologicals) reagent was added to the serum samples with positive RF antibody to block and neutralize it (blocking agent) according to manufacturer’s instructions.

Quantification of Human Endothelial Cell-Specific Molecule -1 levels in the sera of all studied subjects was performed by sandwich ELISA technique using a commercially available Enzyme-linked Immunosorbent Assay Kit for Human ESM1 (Cloud-Clone Corp., Wuhan, CHINA). The sera were collected and stored at -20°C to -80°C. All the reagents were brought and the samples were centrifuged again after thawing before the assay. It is recommended that all samples and standards should be assayed in duplicate. 100μL of Standard, Blank, or Sample per well were added. The blank wells were added with Reference Standard & Sample diluent. The plate were covered with sealer. The samples were then incubated for 90 minutes at 37°C. The liquids were then removed from each well, but the sample were not washed. Immediately, 100μL of Biotinylated Detection Ab working solutions were added to each well, then were covered with the Plate sealer. Gently, the plate were tapped to ensure thorough mixing, followed by incubation for 1 hour at 37°C. Each well was aspirated and washed, repeating the process three times. Washing was conducted by filling each well with Wash Buffer (approximately 350μL). After the last wash, remaining Wash Buffer was removed by aspirating or decanting. Add 100μL of HRP Conjugate working solution to each well. Cover with the Plate sealer, followed by incubation for 30 minutes at 37°C. The wash process was repeated for five times as conducted in step 3. 90μL of substrate solution were added to each well and covered with a new Plate sealer, followed by incubation for about 15 minutes at 37°C. The plate were protected from light. 50μL of Stop Solution were added to each well, which turned the color to yellow immediately. The order to add stop solution should be the same as the substrate solution. The Optical Density (OD value) of each well was determined at once, using a micro-plate reader set to 450 nm. Calculation of the results averaged the duplicate readings for each standard and samples, from which the average zero was subtracted from standard optical density. A standard curve was made by plotting the mean OD value for each standard on the y-axis against the concentration on the x-axis and a premium appropriate curve was drawn over the points on the graph. If the samples were diluted, the concentration calculated from the standard curve was multiplied by the dilution factor. The detection range of test was 15.6-1,000pg/ml with a minimum detectable level less than 6.2pg/ml. This assay has high sensitivity and excellent specificity for detection of ESM1. 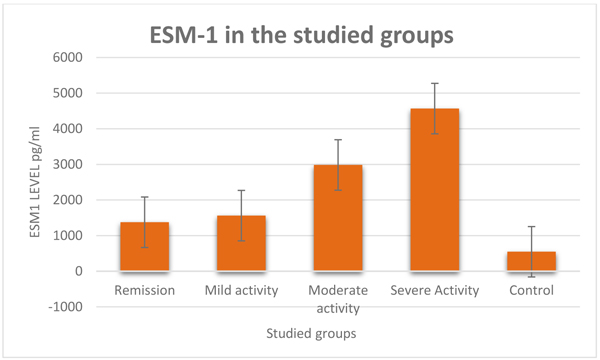 ). Mean level of RF, ACPA, ESR, and CRP were significantly higher in the patients group compared to the control group. As regard gender, age, and BMI, there were no significant difference between both groups Table 1.

Table 1
Demographic, clinical and serological data of the studied groups.

3.1. In the Patient’s Subgroups

In patients with severe disease activity subgroup, compared with patients on remission; serum levels of ESM-1, CRP, ESR, and RF were (P < 0.0001) Fig. (1

Table 2
Demographic, clinical and serological data of the RA subgroups. 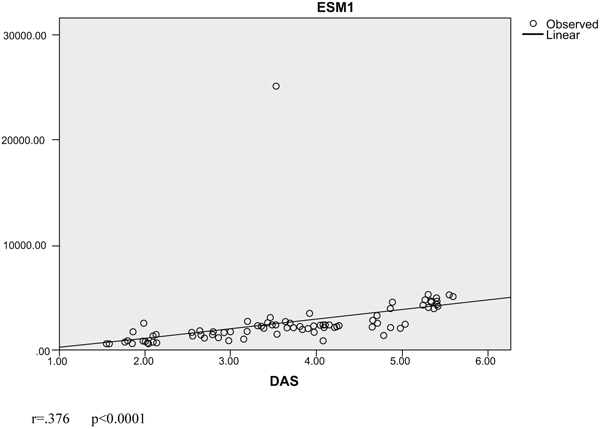 Table 3
Pearson Correlation between ESM-1 and other clinical and serological data in RA patients.

), which supported the link between ESM-1 and RA disease activity and highlighted the possible future use of therapeutic anti- ESM-1 in treatment of RA and management of its activity. Finally, we can concluded that ESM-1could be a biomarker for RA disease activity.

The study was approved from the Ethics Committee of the School of Medicine, Mansoura University (R1/16.10.06).

All patients gave an informed consent when they were enrolled.