Systemic Lupus Erythematosus (SLE) is a chronic multisystemic inflammatory disorder that can present with a wide array of signs and symptoms. Hepatic involvement is commonly limited to a subclinical biochemical transaminitis while clinically significant liver disease is rare. A case of a 22-year-old female who presented with abdominal pain, fevers, arthralgia, and several hepatic hypodense lesions with normal liver function tests is reported in this study. She failed to improve with antibiotics and infectious workup was largely unrevealing. She was found to have a positive ANA, high titers of anti-double-stranded DNA antibody, and was ultimately diagnosed with new-onset SLE with hepatic aseptic micro-abscesses. Her symptoms were self-limiting, and she was later started on a low-dose prednisone taper and hydroxychloroquine. This case demonstrates that hepatic involvement, despite normal liver function tests, should be considered in SLE patients presenting with abdominal pain.

A 22-year-old female presented to the emergency room with abdominal pain and headache. Her symptoms began ten days ago with sharp, non-radiating right upper quadrant abdominal pain that progressively worsened to 7/10 in severity. There was no association with food intake, loss of appetite, diarrhea, nausea, or vomiting. She denied any change in bowel

habits or characteristics. Three days after the onset of pain, she developed several symptoms a sore throat with multiple painful oral ulcers, diffuse arthralgia, non-productive cough, intermittent fevers up to 102° F, and a 15lb weight loss in the last two months. She denied any Raynaud’s phenomenon, joint swelling, or skin changes. She reported a history of occasional painful vaginal ulcers in the past and noticed them a few days prior that seemed to have resolved. She was previously tested for sexually transmitted diseases and was found to be negative for HSV, gonorrhea/chlamydia, and HIV.

Four days before admission, she presented to local urgent care and was diagnosed with an acute viral syndrome. She was started on amoxicillin/clavulanic acid for a possible developing bacterial respiratory infection. Other than an improvement in her oral ulcers, she denied any change in her symptoms and represented to the emergency room for ongoing abdominal pain and a new frontal headache. The headache was constant and minimally responsive to acetaminophen. She had no associated vision/hearing changes, vertigo, auras, and this was not like her baseline migraines.

Her medical history was notable for migraines, as mentioned above, and she had a strong family history of autoimmunity. Her father had Grave’s disease, and mother and maternal aunt had SLE. She was sexually active and used barrier contraception with a monogamous partner. She denied any recent travel, new or undercooked foods, sick contacts, significant smoking, alcohol use, or illicit drug use.

Her initial vital signs were: blood pressure of 115/76 mmHg, heart rate of 75, temperature of 36.8 °C, respiratory rate of 18 breaths/min, and oxygen saturation of 97% on room air. She appeared non-toxic, well-nourished, and well-developed. No oral or genital ulcers were observed. The cardiac and pulmonary exam was unremarkable. An abdominal exam was notable for normoactive bowel sounds and moderate-severe right upper quadrant tenderness without any rebound tenderness, distention, palpable masses, or hepatosplenomegaly. There were no rashes, jaundice, or skin pallor. There was no palpable lymphadenopathy. The musculoskeletal exam was also unremarkable with an intact range of motion and no extremity edema, synovitis, or weakness. There was no palpable nuchal rigidity, and Brudzinski's and Kernig signs were negative. The remainder of the exam was also unremarkable. 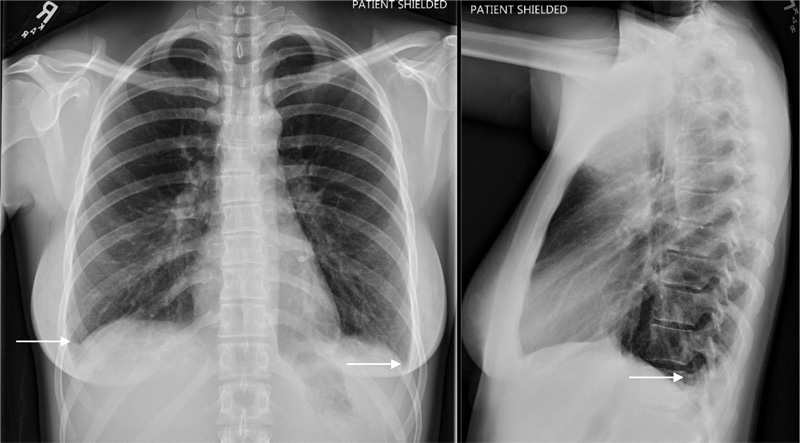 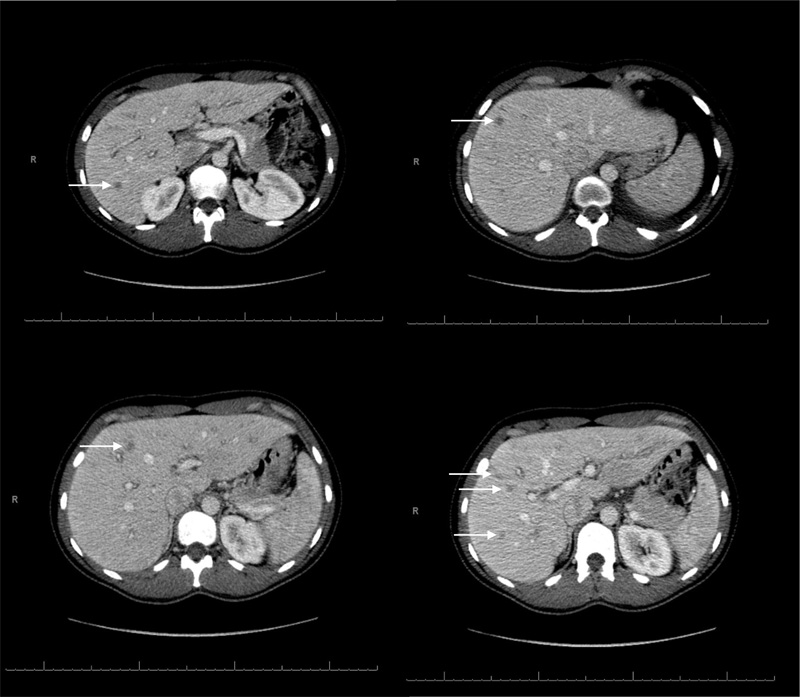 
She was started on broad-spectrum antibiotics with intravenous vancomycin, cefepime, and metronidazole for possible pyogenic vs. amoebic hepatic abscesses. However, she did not improve following three days of IV antibiotics, and her abdominal pain and arthralgia persisted. Based on her strong family history, clinical symptoms, positive anti-dsDNA, positive ANA, low C3, and elevated DRVVT, she was ultimately diagnosed with new-onset SLE. Parenteral corticosteroids were not initially started due to ongoing concern for an underlying infectious process. Her arthralgia, abdominal pain, and fevers started to improve spontaneously with naproxen prior to initiation of parenteral corticosteroids, hence they were not administered, and she was monitored closely. She was discharged on hospital day eight and started on hydroxychloroquine and low-dose prednisone taper as an outpatient with significant clinical improvement.

This case interestingly did not present with a transaminitis. The studies discussed above involved some form of liver function test abnormality consistent with common hepatic findings. This case may have been in its early stages and had not yet reached a point of precipitating a transaminitis, but her serological studies and clinical presentation was consistent with a flare and not a subclinical state suggesting that hepatic involvement may not reflect the underlying stage of SLE.

SLE can be difficult to diagnose due to the variability in presentation, organ system involvement, and seropositivity. Symptoms can be non-specific and serological workup can often only be suggestive. Hepatic involvement should be considered if transaminitis is present and not explained by other more common etiologies such as infectious, ischemic, or local inflammatory. Autoimmune hepatitis (AIH) is often a consideration and was on differential. AIH is thought to have distinct pathophysiology from hepatic involvement in SLE but can present similarly with transaminitis, arthralgia, and constitutional symptoms. Apart from ANA, several different auto-antibodies-notably anti-smooth muscle, anti-actin, anti-SLA/LP, and anti-mitochondrial can be involved in AIH and usually does not involve anti-phospholipid antibodies. Moreover, there are no characteristic imaging findings in AIH, unlike with SLE, as seen in this case. Imaging findings are often unremarkable and do not aid in the diagnosis of AIH. AIH histopathological studies often show abundant plasma and lymphocytic infiltration with necrosis compared to SLE involvement, which tends to have milder inflammation with a paucity of lymphocytes. The prognosis without treatment is poor in AIH and can lead to cirrhosis compared to hepatic involvement in SLE, which can be benign [15Heneghan MA, Yeoman AD, Verma S, Smith AD, Longhi MS. Autoimmune hepatitis. Lancet 2013; 382(9902): 1433-44.
[http://dx.doi.org/10.1016/S0140-6736(12)62163-1] [PMID: 23768844] , 16Hofer H, Oesterreicher C, Wrba F, Ferenci P, Penner E. Centrilobular necrosis in autoimmune hepatitis: A histological feature associated with acute clinical presentation. J Clin Pathol 2006; 59(3): 246-9.
[http://dx.doi.org/10.1136/jcp.2005.029348] [PMID: 16505273] ].

Informed consent was taken from all the participants when they were enrolled.

CARE guidelines have been followed in this study.

The authors have no relevant conflicts of interest or financial supports to disclose. To protect patient privacy, identifying information including names, initials, or hospital rooms are not described in manuscript and figures.