Candida Arthritis after Arthroscopic Arthroplasty in a Patient without Predisposing Factors

Because candidiasis is usually associated with immunosuppression, candida arthritis in an immunocompetent patient is rare. The symptoms of candidiasis are similar to bacterial infections, tuberculosis, and autoimmune diseases. In our patient with no predisposing factors, candida arthritis was initially excluded because the probability of occurrence was low. The patient had no leukocytosis, the acid-fast bacteria (AFB) stain was negative, and the autoimmune antibody screen was negative. After Candida parapsilosis was cultured in the synovial fluid, the patient was treated with amphotericin B (0.7 mg/kg/day) and oral fluconazole (400 mg/day). The treatment was successful and there were no side effects of the medications.

Candida arthritis is a very rare disease. And, most of the cases have been associated with immunosuppressive conditions, such as cancer, AIDS, organ transplantation, chronic renal failure, steroid use, and heroin abuse [1Sili U, Yilmaz M, Ferhanoglu B, Mert A. Candida krusei arthritis in a patient with hematologic malignancy: Successful treatment with voriconazole Clin Infect Dis 2007; 45: 897-.-6Jeragh A, Ahmad S, Naseem J, Khan ZU. Candida lusitaniae arthritis in an intravenous drug user Mycoses 2007; 50: 430-32.]. We present a patient with no predisposing factors who developed right knee arthritis caused by Candida parapsilosis 8 weeks after arthroscopic arthroplasty.

Her medical history was negative for any rheumatoid diseases, cancer, renal diseases, and AIDS. She was a non-smoker, and did not take any steroids, antibiotics, or illegal drugs. On physical examination, the patient had no rashes, lymph node enlargement, or hepatosplenomegaly. The patient’s vital signs were as follows: blood pressure, 130/80 mmHg; heart rate, 88/min; respiratory rate, 20/min; and body temperature, 36.8°C (98.2°F). The patient was alert and oriented, and there were no oral ulcers or erythema. The conjunctivae were not anemic and the sclerae were not icteric. A chest X-Ray showed a normal cardiac silhouette with no signs of pulmonary edema, and an EKG showed a normal sinus rhythm.

On hospital day 2, the radiographs of both knees showed a mottled appearance of the distal femur and proximal tibia and asymmetric joint space narrowing (Fig. 1 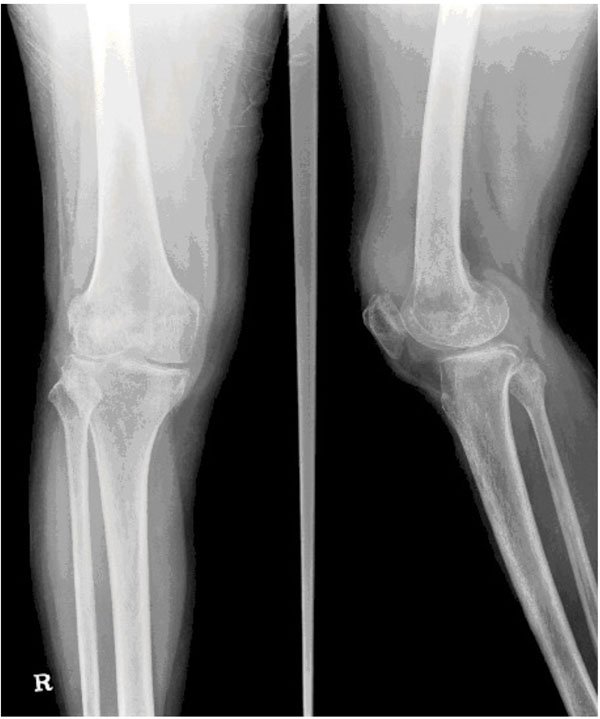 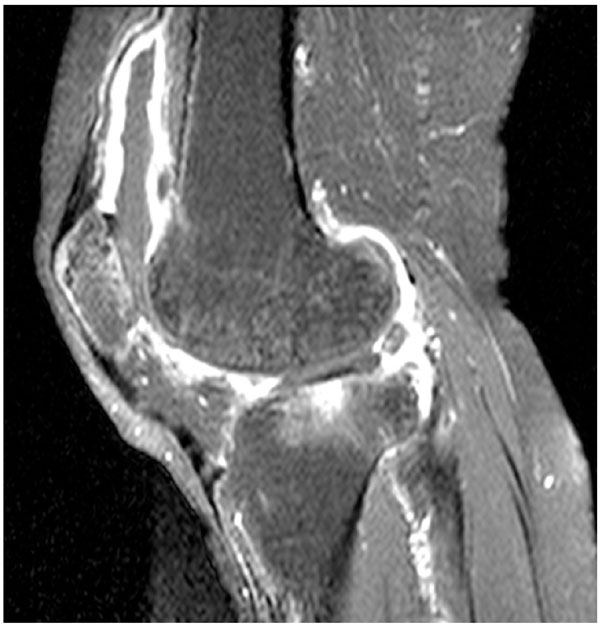 ). Amphotericin B (0.7 mg/kg/day) was given intravenously for 3 weeks. As the pain and swelling of the knee subsided, the amphotericin B was discontinued and oral fluconazole (400 mg/day) was prescribed for 6 months. The last culture of synovial fluid was negative for C. parapsilosis and the patient had no complaints of pain or swelling.

Having osteoarthritis in the right knee for a lengthy period of time, the patient had an arthroplasty without transplantation of prosthesis. There was no evidence of immunosuppression before or after surgery. The arthroscopic arthroplasty was performed under aseptic conditions. It has been reported that knee arthroplasty can cause candida arthritis, yet minimally invasive procedures such as arthroscopy have been not considered as a predisposing factor [10Açikgöz ZC, Sayli U, Avci S, Dogruel H, Gamberzade S. An extremely uncommon infection: Candida glabrata arthritis after total knee arthroplasty Scand J Infect Dis 2002; 34: 394-6.]. Postoperative infections occur in about 0.4% of patients when the arthritis is treated with arthroscopy [11Paul J, Kirchhoff C, Imhoff AB, Hinterwimmer S. Infection after arthroscopy Orthopedics 2008; 37: 1048, 1050-2, 1054-5.].

This represents the first report of candida arthritis developing in a patient without predisposing factors following arthroscopic arthroplasty. Candidiasis is generally asymptomatic, or only has pain and swelling in the knee [9Kawanabe K, Hayashi H, Miyamoto M, Tamura J, Shimizu M, Nakamura T. Candida septic arthritis of the hip in a young patient without predisposing factors J Bone Joint Surg Br 2003; 85: 734-5.], thus many cases are aggravated by a late diagnosis. If a patient complains of pain and swelling in the knee after arthroscopy, the possibility of a fungal infection should be considered. Although all minimally invasive procedures are not important risk factors for postoperative infection [10Açikgöz ZC, Sayli U, Avci S, Dogruel H, Gamberzade S. An extremely uncommon infection: Candida glabrata arthritis after total knee arthroplasty Scand J Infect Dis 2002; 34: 394-6.], candida arthritis should be in the differential diagnosis in a patient following arthroscopy.

Full written consent was received for the manuscript to be published.