Tissue inhibitors of metalloproteinases (TIMPs) are multi-functional proteins with matrix metalloproteinases-inhibiting activities. We studied expression of anti-inflammatory, TIMP-4 gene in human joint tissues and its regulation by arthritis-associated cytokines.

Enhanced TIMP-4 gene expression in OA synovial membranes and cartilage may be due to induction by TGF-β1, OSM and IL-17, suggesting its pathophysiological role in tissue remodeling in human joints. TGF-β1 induction of TIMP-4 expression is mediated partly by ERK pathway and Sp1 transcription factor.

Synovial membranes from 7 non-arthritic, post-mortem (3 female and 4 male, mean age 53.6 years) tissues with no knee joint disease were analyzed. Knee OA synovial membranes were from eight patients (4 female and 4 male, mean age 71.3 years) with clinically and radiologically defined knee OA and were obtained after total knee replacement surgery. For TIMP-4 gene expression in human knee (patient data not available) and femoral head cartilage (non-arthritic hip fractures, 2 females, mean age, 83 years; hip late-stage OA, 9 female and 6 male, mean age 72.1 years; osteophytes excluded), chondrocytes were released after digestion with pronase (1mg/ml) for 1 h followed by collagenase (2 mg/ml, Sigma type-II) for 8 h at 37oC with agitation, grown for one week in DMEM supplemented with 1X penicillin-streptomycin solution and 10% fetal calf serum as primary cultures, maintained in the same medium without serum for 24 h and RNA extracted. Synovial fibroblasts were obtained by mincing and digestion of non-OA or OA synovial membranes with 0.25% trypsin and 2 mg/ml collagenase, passing through strainer, culturing adherent cells and removal of non-adherent cells. Synovial fibroblasts at passage 3 were kept in 0.5% serum for 24 h before RNA extraction. For cytokine treatments, high-density passage 2 knee chondrocytes (Cambrex) were grown to confluence, kept in serum-free medium for 36 h and treated with TGF-β1 (10 ng/ml), OSM (25 ng/ml), TNF-α (20 ng/ml), IL-1β (10 ng/ml) and IL-17 (20 ng/ml) (all from R&amp;D Systems) for 24 h and RNA and protein extracted. In some cases, chondrocytes in serum-free medium were pretreated with MEK inhibitor, U0126 (Calbiochem) or Sp1 inhibitor, mithramycin (Sigma-Aldrich) for 30 min and then induced with TGF-β1 for 24 h and total RNA analyzed for TIMP-4 and GAPDH expression by RT-PCR. The tissues used in this study were obtained either during autopsy (after 12 h of death due to cardiocerebral events) or during knee/hip replacement surgery at Hopital Notre-Dame du CHUM with the consent of patients or families and with the approval of Comité d’éthique de la recherche du Centre hospitalier de l’université de Montréal (CHUM) protocole number ND98.58 entitled “Base moléculaire de regulation des genes d’inhibiteurs tissulaire des métalloprotéinases-3 (TIMP-3) et (TIMP-4) par les facteures de croissance et antioxydants dans les cellules de tissues conjonctifs”. The research project conformed to the Helsinki declaration and local ethics committee regulations.

TIMP-4 cDNA band intensities were quantified by NIH ImageJ 1.32j (National Institute of Health, USA) software and divided by those of GAPDH. Results are reported as means ± SEM of at least 3 different experiments and were compared with Prism software by student’s t test or ANOVA, followed by a Newman-Keuls multiple comparison. p < 0.05 was considered significant.

Ability of human synovium to express the newest TIMP-4 gene was investigated. RT-PCR analysis of RNA from 7 control and 8 knee OA patients revealed that both categories of subjects expressed TIMP-4 mRNA. One normal and one OA synovium had lower but detectable levels of TIMP-4 mRNA relative to the other samples. Cloning and DNA sequencing of the PCR product at both ends confirmed its identity as TIMP-4 cDNA. The control GAPDH mRNA levels remained consistent (Fig. 1 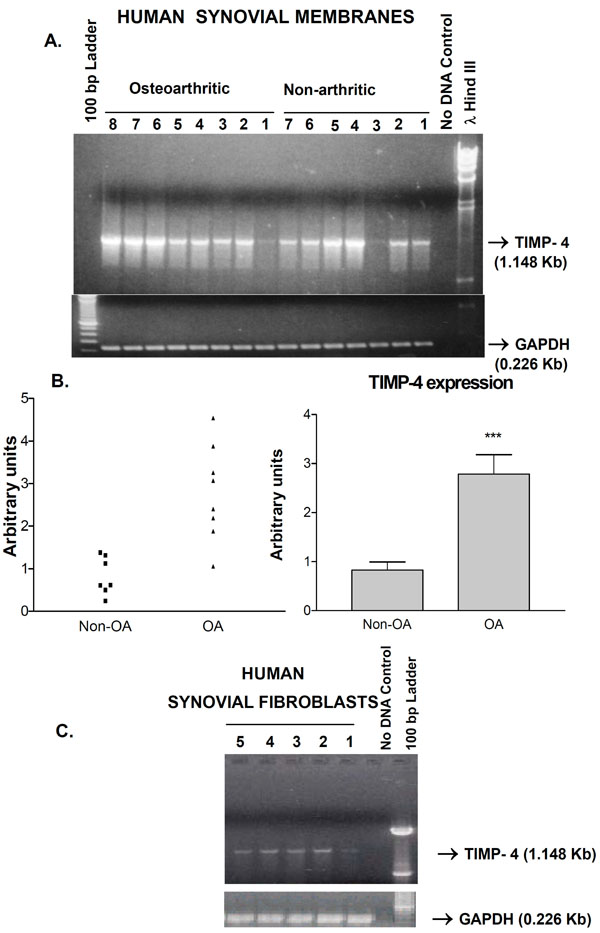 ). Quantitative analysis of the bands revealed a statistically significant (p<0.001) 2.4 fold enhancement of TIMP-4 expression in OA patients (Fig. 1B

To examine if human hip joint chondrocytes expressed TIMP-4 gene ex vivo, RNAs from the quiescent chondrocytes of two older patients with femoral fracture and 15 patients with hip OA were analyzed. All specimens expressed variable but clearly detectable levels of TIMP-4 mRNA along with consistent GAPDH control mRNAs. Determination of TIMP-4/GAPDH ratio revealed an increased tendency of TIMP-4 expression (though not statistically significant) in hip OA chondrocytes (Fig. 2A 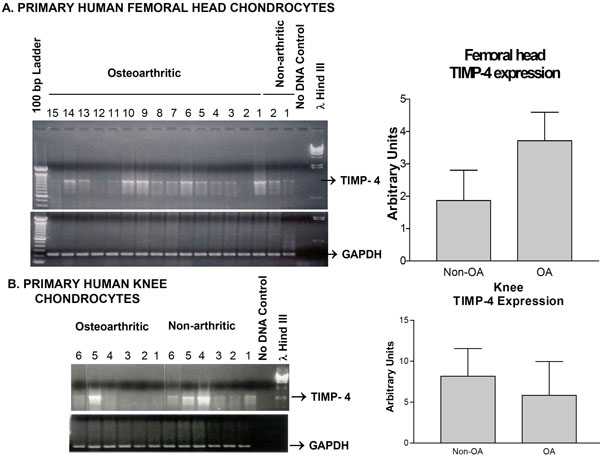 Impact of Cytokines on TIMP-4 Expression in Human Chondrocytes 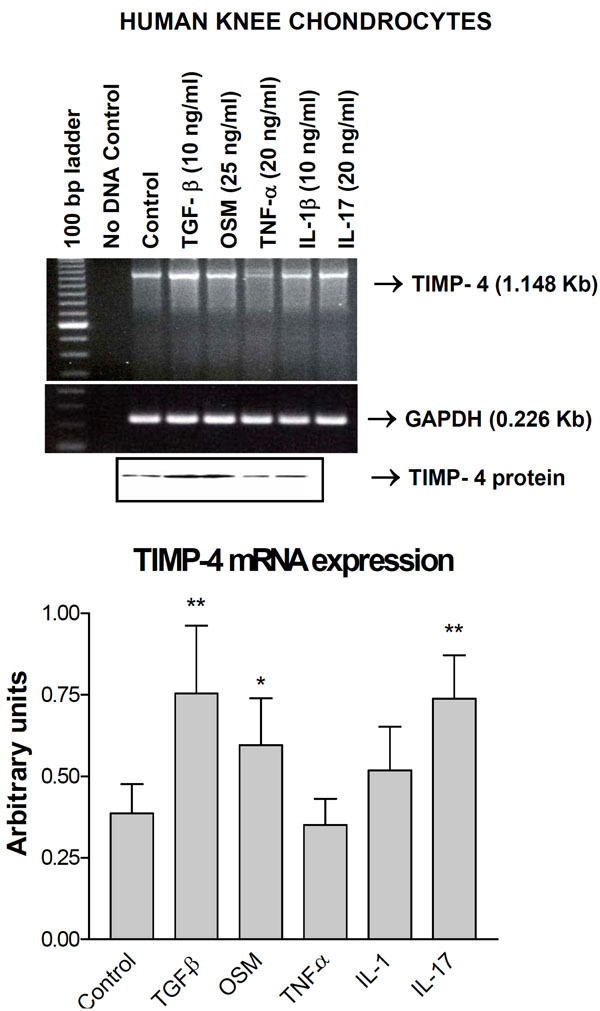 Mechanism of TIMP-4 Induction by TGF-β1 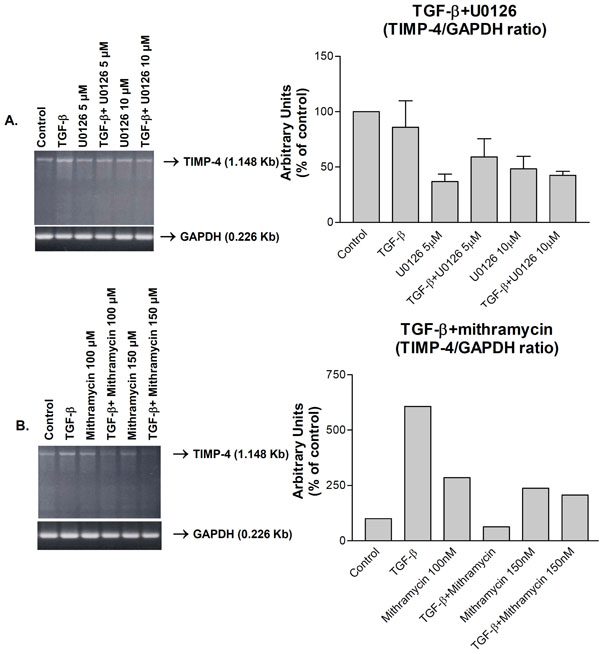 , left panel). Similar inhibition by U016 was observed when TIMP-4/GAPDH ratios from three independent experiments were determined (Fig. 4A

, left panel). Although statistically non-significant, these results suggest that ERK pathway and Sp1 factor are important mediators of TIMP-4 induction by TGF-β1.

In summary, previously undocumented increase of TIMP-4 in human knee synovium and expression in primary hip and knee chondrocytes was demonstrated. TIMP-4 was differentially induced by arthritis-associated cytokines. In vivo increase may be due to its induction by TGF-β1, OSM and IL-17. TGF-β1 induces TIMP-4 gene expression partly through ERK and Sp1 pathways. Due to multiple activities of TIMPs in other tissues, additional studies are needed to define TIMP-4 regulation and functions in joints and its potential for inhibiting cartilage and bone resorption [28Murphy G, Lee MH. What are the roles of metalloproteinases in cartilage and bone damage? Ann Rheum Dis 2005; 64(Suppl 4 ): iv44-7.].

This work was supported by the Canadian Institutes of Health Research (CIHR) grants. MZ is a member of the Canadian Arthritis Network (CAN). We thank Drs Julio Fernandes and Nicolas Duval for tissues.