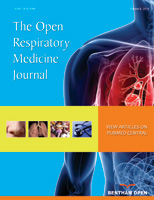 Angiosarcoma Presenting with Spontaneous Hydropneumothorax: Report of a Case and Review of the Literature

An 83-year-old male visited a local clinic because of sudden chest pain, which developed 1 month prior and became aggravated 1 week previously. He was referred to our hospital for the problem of hydropneumothorax. There was no specific history or familial history of cancer, diabetes, or tuberculosis. He had a 25 pack-year of smoking history. On admission, he appeared acutely ill. His blood pressure was 110/70 mmHg, his pulse rate was 100 beats per minute, and his body temperature was 36.6°C. He showed a poor performance status with an Eastern Cooperative Oncology Group (ECOG) scale score of 3. A mass was palpated on the left supraclavicular area, and it was not tender and firm in consistency. There was a skin lesion of 6 mm in size that was not painful and that was violet and dome shaped in elevation on the left parietal lobe of the skull. Breathing sounds in the left lower lung field were decreased, and no crackles were heard. Other physical findings were negative. On the day of admission, his white blood cell count was 10,400/mm3 with 70% neutrophils and 25% lymphocytes, the hemoglobin level was 12.5 g/dL, and the platelet count was 269,000/mm3. Serum biochemical values were as follows: the blood urea nitrogen level was 23 mg/dL, the creatinine level was 1.6 mg/dL, the total protein level was 5.0 mg/dL, the albumin level was 2.6 mg/dL, and other values were within normal ranges. The levels of neuron-specific enolase, carcinoembryonic antigen, alpha fetoprotein, and CA 19-9 were 14.1 ng/mL, 3.6 ng/mL, 1.9 ng/mL, and 7.5 U/mL, respectively. Initial pleural fluid analysis showed a pH of 7.2, the white blood cell count was 6500/mm3 with 90% eosinophils, 7% lymphocytes, and 1% neutrophils, the total protein level was 3.3 mg/dL, the albumin level was 2.0 mg/dL, the lactic dehydrogenase level was 356 U/L, the adenosine-deaminase level was 29.4 U/L, and the carcinoembryonic antigen level was 6.1 ng/mL. Results for microbiology and cytology in the pleural fluid were negative. On the day of admission, chest radiography showed the finding of hydropneumothorax (Fig. 1 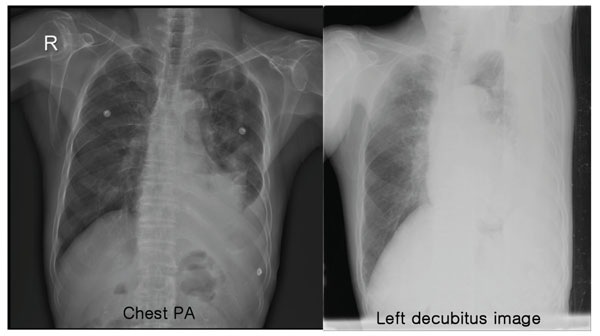 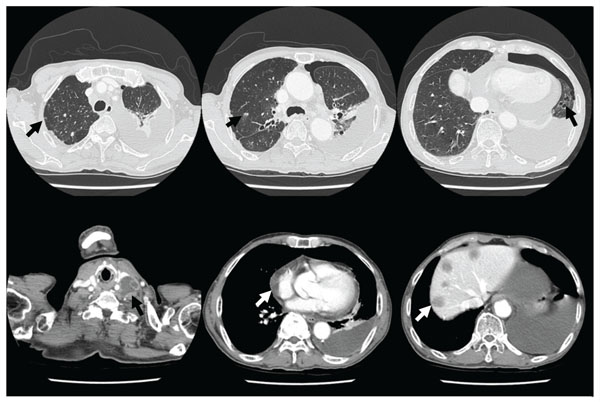 ). Trans-thoracic echocardiography showed a mass with a diameter of 2.0 cm at the right atrioventricular orifice (Fig. 3 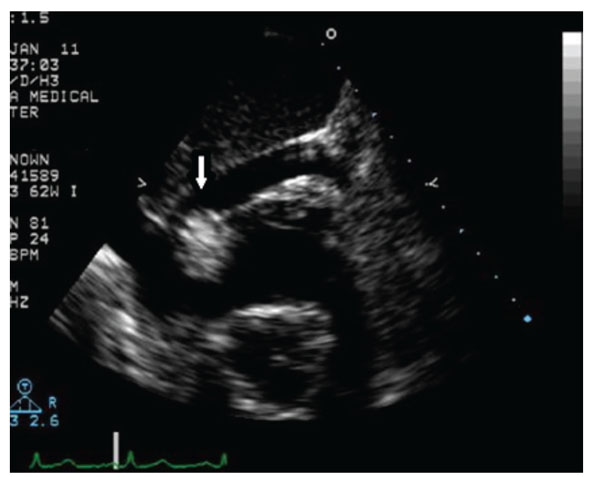 ). Because initial pleural fluid cytology was reported to be negative, excisional biopsy of the cervical lymph nodes was performed. Histopathology revealed that the lymph nodes were almost replaced by the tumor, which formed an anastomosing network of sinusoids lined by hyperchromatic nucleated endothelial cells (Fig. 4

). Positron emission tomography-CT showed a standardized uptake value of 14.3 on fluorodeoxyglucose uptake at the left tonsil and also increased uptake at cervical lymph nodes, both lungs, and the liver (Fig. 5 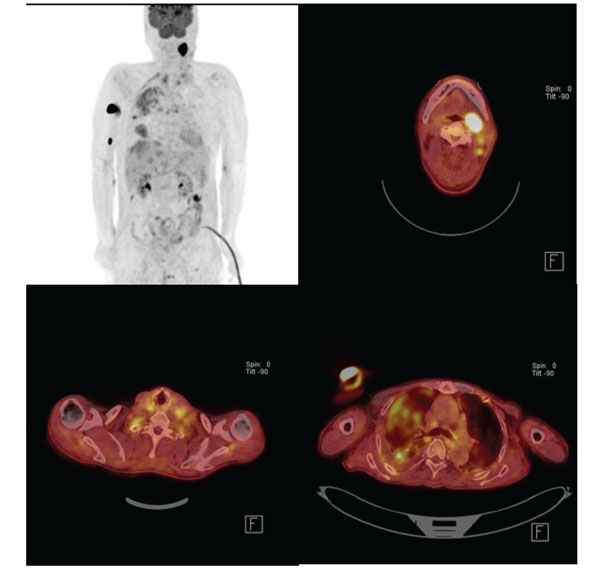 ). A second thoracentesis revealed pleural metastasis of angiosarcoma under the stains of CD31, CD34, and von Willebrand factor for the atypical cell cluster of the pleural fluid (Fig. 6 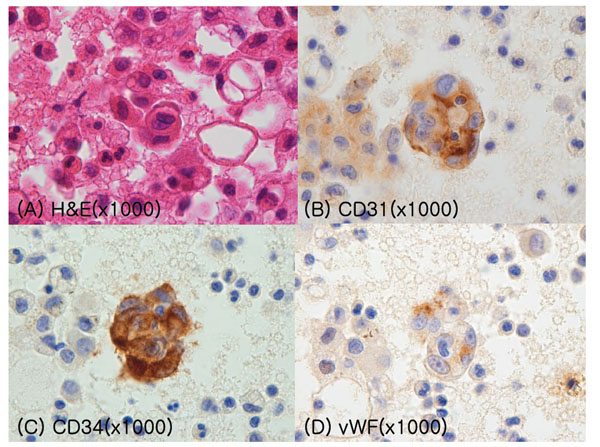 ). Because of the involvement of angiosarcoma in the heart, lungs, pleura, multiple lymph nodes, skin, and liver, the patient was discharged after conservative treatment with consideration of age and current performance status.

Angiosarcoma is a malignant cancer that rarely occurs and has a poor prognosis. Angiosarcoma occurs at a male predominance, and mostly affects elderly people, although it can occur at all ages. We reviewed 33 patients from 24 previous reports concerning angiosarcoma with pneumothorax that were based on a PubMed search since 1978. Among the 33 subjects, 21 cases were available for review; 16 subjects were male and 5 were female. The mean age was 68 years, and the most common computed tomography findings were multiple thin-walled cysts and nodules located in the subpleural area (Table 1). As a spontaneous pneumothorax in an aged person, the differential diagnosis was most commonly emphysema (91%), followed by isolated bulla or blebs (4%), mesothelioma (2%), and rare cases of subpleural fibrosis, congenital cystic adenomatoid malformation, tuberculous pleuritis, and angiosarcoma [7Jordan KG, Kwong JS, Flint J, Muller NL. Surgically treat pneumothorax radiologic and pathologic findings. Chest 1997; 111: 280-5.].

Cases of angiosarcoma with spontaneous pneumothorax reported since 1978.

Thanks to Ms. Haesoo Chang for the support of English revision.