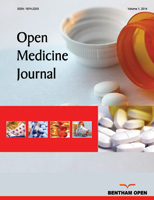 Mannose-Binding Lectin (MBL) is a member of the collectin family and is an important protein in the immune system. It is a pathogen pattern-recognition molecule that binds to specific carbohydrate motifs on the surface of many pathogens. MBL activates complement via lectin pathway. Single nucleotide polymorphisms in the MBL gene influence serum MBL concentration and function. MBL deficiencies increase the risk of infection and disease-specific complications, especially in those who are already immune compromised with pre-existing conditions. This review discusses the molecular genetics of human MBL and the association of MBL polymorphisms with liver diseases including liver fibrosis, viral hepatitis B, viral hepatitis C, and infection post-liver transplantation.

The complement system, a major component of innate immunity, provides immediate defence against infection and has a pro-inflammatory response. It consists of plasma and membrane proteins, which mediate 3 pathways, namely classical, alternative and the most recently described lectin [1Ikeda K, Sannoh T, Kawasaki N, Kawasaki T, Yamashina I. Serum lectin with known structure activates complement through the classical pathway. J Biol Chem 1987; 262(16): 7451-4.
[PMID: 3584121] ]. Activation of these pathways of cascading enzymatic reactions results in the deposition of fragments that promote inflammatory and immune response. The classical pathway is activated when Immunoglobulin M or Immunoglobulin G antibody bind to antigens such as viruses and bacteria that the resulting immune complexes are recognised by C1q, the first component of the classical pathway. The activation of lectin pathway is similar to the classical pathway except that pathogens are directly recognised by a lectin, which includes MBL. MBL is an equivalent of C1q. 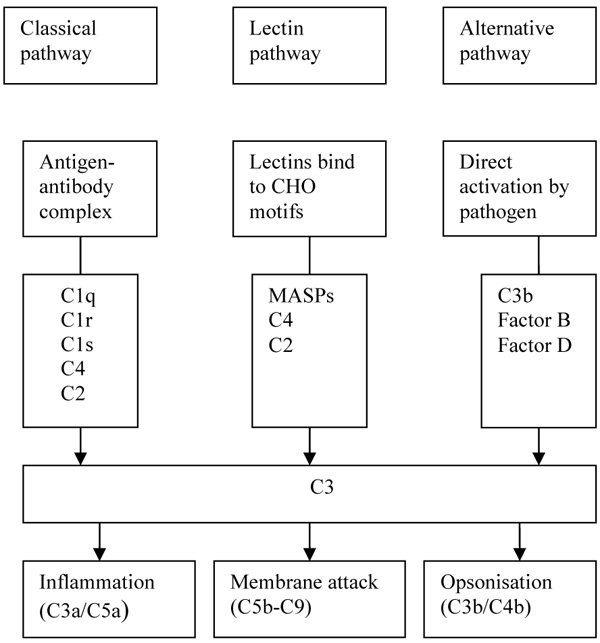 ). The effects are membrane modification and promotion of the inflammatory response. Complement fragments including C3b deposit in large numbers on microbes and unwanted materials such as apoptotic cells and necrotic tissue. This coating or opsonisation of bacteria and altered-self elements allows specific receptors on peripheral blood cells, especially phagocytes, to bind these ligands. Additionally, activation of complement results in the formation of the membrane attack complexes (C5b-9), which perturb the bacterial cell membrane, thereby causing lysis of the microbes. Activation of the complement system leads to the release of pro-inflammatory peptides. Additionally, complement is also bactericidal as C3a and C4a directly kill microorganisms [2Pasupuleti M, Walse B, Nordahl EA, Mörgelin M, Malmsten M, Schmidtchen A. Preservation of antimicrobial properties of complement peptide C3a, from invertebrates to humans. J Biol Chem 2007; 282(4): 2520-8.
[http://dx.doi.org/10.1074/jbc.M607848200] [PMID: 17132627] ]. 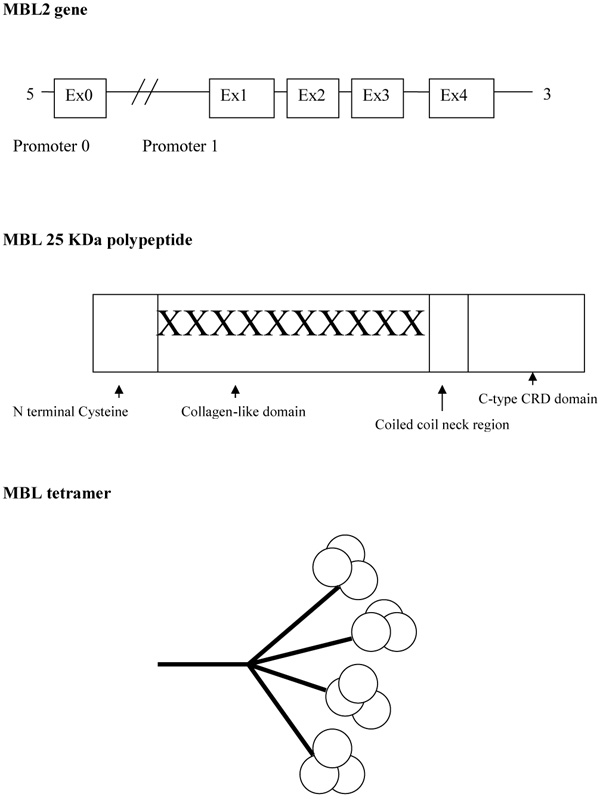 3. MBL AND ITS ROLE IN LIVER DISEASE

In a large normal population of 566 blood donors, the median serum MBL level was 1.3µg/ml (range 0-8.4µg/ml) with 10% having a very low MBL level (<0.1 µg/ml) [20Kilpatrick DC, Delahooke TES, Koch C, Turner ML, Hayes PC. Mannan-binding lectin and hepatitis C infection. Clin Exp Immunol 2003; 132(1): 92-5.
[http://dx.doi.org/10.1046/j.1365-2249.2003.02122.x] [PMID: 12653842] ]. Studies have shown that liver cirrhosis does not seem to have any impact on the serum MBL level as 10.7% cirrhotic patients were also found to have very low levels of MBL (<0.1 µg/ml). This was confirmed in a larger Hungarian study [21Altorjay I, Vitalis Z, Tornai I, et al. Mannose-binding lectin deficiency confers risk for bacterial infections in a large Hungarian cohort of patients with liver cirrhosis. J Hepatol 2010; 53(3): 484-91.
[http://dx.doi.org/10.1016/j.jhep.2010.03.028] [PMID: 20605050] ], which found that among patients with liver cirrhosis of various aetiologies, the median MBL level was 1.118 µg/ml, and was not statistically different compared to the healthy control (1.027 µg/ml). Analysing subsets of liver disease did not reveal any particular liver disorder with lower MBL level. However, in cirrhotic patients, the risk for infection was significantly higher among MBL deficient patients and there is a shorter time to develop infectious complications when compared to non-deficient MBL cirrhotics.

4. MBL AND HEPATITIS B VIRUS (HBV)

With a mother to child transmission rate of HBV in the region of 5 -10%, intra-uterine transmission of HBV may be related to a failure of HBV infected mothers to stimulate an increase in foetal MBL levels to combat the virus. It has been shown that non-infected neonates of HBV mothers have an induced increase in MBL levels conferring protection whilst neonates born with HBV have a significantly lower level of MBL [37Wu Y, Zhou Q, Wang H, et al. Potential role of mannose-binding lectin in intrauterine transmission of hepatitis B virus. Jpn J Infect Dis 2013; 66(5): 391-3.
[http://dx.doi.org/10.7883/yoken.66.391] [PMID: 24047736] ].

Following liver transplantation, the donor’s liver influences the MBL status of the recipient, as the liver is the primary source of MBL production. Therefore, if the recipient receives a liver with an exon 1 MBL2 variant genotype with decreased MBL level production and its suboptimal function, it is highly plausible that the recipient is at increased risk of infection post-liver transplantation. Several studies have suggested this to be the case, finding that the presence of MBL variant alleles in the MBL gene of the donor's liver, but not in the recipient, was associated with a strongly increased incidence of clinically significant infections after transplantation [45Bouwman LH, Roos A, Terpstra OT, et al. Mannose binding lectin gene polymorphisms confer a major risk for severe infections after liver transplantation. Gastroenterology 2005; 129(2): 408-14.
[http://dx.doi.org/10.1016/j.gastro.2005.06.049] [PMID: 16083697] -47de Rooij BJ, van der Beek MT, van Hoek B, et al. Mannose-binding lectin and ficolin-2 gene polymorphisms predispose to cytomegalovirus (re)infection after orthotopic liver transplantation. J Hepatol 2011; 55(4): 800-7.
[http://dx.doi.org/10.1016/j.jhep.2011.01.039] [PMID: 21334396] ].

However, not all studies showed the same association. A large single-centre study involving 290 donor livers failed to find any association between the donor MBL genotypes and the risk of bacterial infection after liver transplantation [49Curvelo LA, de Mare-Bredemeijer E, de Canck I, et al. Does the donor mannose-binding lectin genotype really predict the risk of bacterial infections after liver transplantation? Hepatology 2011; 53(5): 1786-7.
[http://dx.doi.org/10.1002/hep.24114] [PMID: 21520193] ]. Cevera et al. concurred with this finding but concluded that although liver transplantation from an exon 1 MBL 2 variant genotype was not associated with a higher incidence of infection, the reduced levels of MBL contributed to poorer outcome as infectious events were of higher severity. They proposed that MBL2 genotyping be performed as deficiency could represent a major risk factor for infection-related mortality [50Cervera C, Balderramo D, Suárez B, et al. Donor mannose-binding lectin gene polymorphisms influence the outcome of liver transplantation. Liver Transpl 2009; 15(10): 1217-24.
[http://dx.doi.org/10.1002/lt.21834] [PMID: 19790141] ].

The role of MBL in the susceptibility to various diseases, including liver diseases, is sometimes controversial. For the same disease, association, or the lack of it, have been reported.

8. THE ROLE OF MBL REPLACEMENT THERAPY IN LIVER DISEASES

Although the data is conflicting and no clear-cut association can be concluded between MBL polymorphisms and numerous liver diseases including liver fibrosis, viral hepatitis B, C and infection post-liver transplantation, the balance of opinion would be that MBL levels do contribute to disease progression and outcomes. Although plausible, MBL replacement therapy, which is still in its infancy stage, is unlikely to play any significant role in liver diseases. Further larger studies are required before MBL polymorphisms can be accepted, or refuted, as having an association with liver diseases.

The authors declare that there is no conflict of interest, financial or otherwise.