There is scarcity of data about the prevalence of non-AIDS defining comorbidities among stable HIV-infected patients in Peru.

We aimed to describe the most frequent cardiometabolic comorbidities found among ambulatory adults on ARV in Peru.

A review of records for patients attending regular visits at 5 clinics in Lima-Callao in January-February 2016 is presented. Patients were adults on ARV for >6 months, with no recent AIDS-defining condition.

A high proportion of metabolic comorbidities was found, with dyslipidemia being the most frequent, followed by obesity and diabetes. In contrast, cardiovascular disease was documented less frequently. Medical treatment was started for only a third of dyslipidemia patients. HIV care policies need to consider proper management of chronic comorbidities to optimize long-term outcomes.

A sample of HIV-infected patients attending five clinics in Lima-Callao for regular follow up visits between January 1 and February 29, 2016 was evaluated. Subjects were adults (>21 years), on ARV for ≥ 6 months, with no current or recent (≤ 6 months) AIDS-defining condition, that had a scheduled appointment for routine outpatient follow up with a physician member of the study team. Medical charts of all consecutive adult patients attending an appointment with a study investigator at the participating clinics during the study period were reviewed. Epidemiological, clinical and laboratory information was collected from medical records of subjects that met eligibility criteria. A target of at least 50 subjects was set for each participating site.

All participating sites are major providers of care for people living with HIV within the two Peruvian public-funded systems (Social Security and Ministry of Health) in Lima and Callao, urban areas where approximately 63% of the HIV-infected Peruvian population reside [32 Boletín Epidemiológico de VIH, Marzo 2017. Ministerio de Salud, Peru. Available from: http://www.dge.gob.pe/portal/docs/ vigilancia/vih/Boletin_2017/marzo.pdf]. Four of the sites provide hospital-based and ambulatory services, and one provides only ambulatory care.

Approval from the institutional review board at each participating site was obtained. No informed consent was obtained, since none of the study procedures involved direct contact with patients and information was handled anonymously.

Obesity and excess weight were estimated with anthropometric data recorded (height and most recent weight within 6 months of visit). Obesity was defined as Body Mass Index (BMI) >30 kg/m2, and excess weight as BMI between 25 and 30.

In addition, patients were considered to have a history of coronary artery disease if they had one of the following events: known coronary insufficiency, previous myocardial infarction, coronary artery bypass grafting, or coronary angioplasty or stenting. Renal function was estimated with Cockroft-Gault formula (based on most recent serum creatinine within 6 months) to identify cases of renal impairment (creatinine clearance <70 mL/min/1.73m2).

Descriptive statistics were applied to summarize epidemiological and clinical findings. Chi-square test with the Fisher´s exact test was used to assess differences among groups.

Hypertension was found in 8.9% (n=27) of the patients. Other diagnoses of cardiovascular disease (coronary artery disease, congestive heart failure, cerebrovascular disease) were found in 3.3% (n=10), including a patient that had a diagnosis of acute myocardial infarction. The large majority of patients with diabetes and/or hypertension were receiving treatment for those conditions (91.3%), but only 29.3% (n=46) of those with dyslipidemia were receiving specific pharmacologic treatment.

Renal function impairment (estimated Cr Cl<70) was observed in 19 patients (6.2%) and included two cases of subjects with end-stage renal disease not related to HIV. Seventeen remaining patients had milder degrees of deterioration, with 14 of them having a risk factor, such as older age, hypertension or diabetes mellitus. Only four of these 17 patients had a history of current exposure to tenofovir.

Distribution of obesity and excess weight was very similar within subgroups stratified by gender, age (Table 2), duration, or type of ARV (Table 3). Dyslipidemia, diabetes mellitus, hypertension, appeared related to older age (p values between 0.006 and <0.001). Dyslipidemia showed also an association with longer duration of ARV (p = 0.005). The strength of association with longer duration of ARV was weaker for diabetes mellitus (p = 0.071) and hypertension (p = 0.061). Renal function impairment was associated with older age (>50 years) (p < 0.001) (Tables 2 and 3).

Table 2
Frequency of metabolic and cardiovascular comorbidities observed by age group and sex.

Table 3
Frequency of metabolic and cardiovascular comorbidities observed by type of ARV and duration of treatment.

In summary, the analysis of cardiometabolic comorbidities versus age, gender, duration and type of antiretroviral therapy, revealed that: 1) excess weight and obesity were highly prevalent but did not differ among groups for the variables analyzed; 2) the prevalence of dyslipidemia, hypertension, renal function impairment and diabetes mellitus was higher among those 50 years or older when compared to those under 50 years of age; and there was a trend toward those with longer (>5 years) duration of ARV having dyslipidemia, hypertension or diabetes mellitus; 3) cardiovascular disease was observed in a low number of individuals precluding analysis of associations among groups.

In this sample of HIV-infected adults that were clinically stable, had been receiving predominantly NNRTI-based initial antiretroviral therapy for several years, and had a high proportion of virologic and immunologic control, a high proportion of metabolic comorbidities were found, with dyslipidemia, obesity and type-2 diabetes being the most frequent. To our knowledge, this is the first study that assesses cardiometabolic comorbidities among an adult population that has received ARV for a median longer than three years in Peru. The mean time on ARV was 7.78 years in our study versus 1.5 years in RAPID, and 3 years in a recent study from a different Lima Hospital [31Cahn P, Leite O, Rosales A, et al. Metabolic profile and cardiovascular risk factors among Latin America HIV-infected patients receiving HAART. Braz J Infect Dis 2010; 14(2): 158-66.
[http://dx.doi.org/10.1016/S1413-8670(10)70030-1] [PMID: 20563442] , 37Rondan PL, Flores-Flores O, Doria NA, Valencia-Mesias G, Chávez-Pérez V, Soria J. High frequency of dyslipidemia in VIH-infected patients in a Peruvian public hospital. Rev Peru Med Exp Salud Publica 2017; 34(2): 239-44.
[http://dx.doi.org/10.17843/rpmesp.2017.342.2587] [PMID: 29177382] ]

While the global trend is to observe a growing proportion of patients having metabolic and cardiovascular comorbidities, differences have been reported in various settings. For example, frequencies of hypertension appear to be much higher in countries like Puerto Rico, Malawi, Uganda and Switzerland (Table 4). A comparison of the main findings from this and previous studies, including some from Latin American countries and some from other parts of the world is presented in Table 4. As a reference, we included studies from populations not infected with HIV. Differences in study designs limit the comparisons. However, some similarities can be observed in Latin American studies in terms of demographic composition (gender, age) and frequency of metabolic comorbidities [30Wilson G, Wolff M. A decade of antiretroviral therapy: A profile of patients with 10 years of highly effective triple therapy. Rev Chilena Infectol 2012; 29(3): 337-43.
[http://dx.doi.org/10.4067/S0716-10182012000300015] [PMID: 23096476] , 31Cahn P, Leite O, Rosales A, et al. Metabolic profile and cardiovascular risk factors among Latin America HIV-infected patients receiving HAART. Braz J Infect Dis 2010; 14(2): 158-66.
[http://dx.doi.org/10.1016/S1413-8670(10)70030-1] [PMID: 20563442] , 39Mauas R, Laurido M, Cabral L, et al. Prevalence of comorbid conditions in a cohort of women living with HIV in Argentina. P022, HIV & Hepatitis in the Americas 2018. In: JIAS, Abstract Supp, 21(Suppl 3), April 2018.]

Table 4
Comparison of study results versus other published studies.*

In this study, obesity and excess weight were highly frequent and with similar distribution within subgroups divided by age, gender, type and duration of ARV, perhaps reflecting the importance of non –HIV related factors such as diet and lifestyle as seen in the general population.

Dyslipidemia, diabetes, and hypertension showed an association between older age and to a lesser extent to longer duration of ARV. This observation suggests a possible association of those metabolic comorbidities with the long-term use of regimens combining NRTI plus either NNRTI or PI. Protease inhibitors are well known to be associated with dyslipidemia and alterations in glucose metabolism, and efavirenz is associated with dyslipidemia [40Nduka CU, Stranges S, Kimani PK, Sarki AM, Uthman OA. Is there sufficient evidence for a causal association between antiretroviral therapy and diabetes in HIV-infected patients? A meta-analysis. Diabetes Metab Res Rev 2017; 33(6)
[http://dx.doi.org/10.1002/dmrr.2902] [PMID: 28437854] -42da Cunha J, Maselli LM, Stern AC, Spada C, Bydlowski SP. Impact of antiretroviral therapy on lipid metabolism of human immunodeficiency virus-infected patients: Old and new drugs. World J Virol 2015; 4(2): 56-77.
[http://dx.doi.org/10.5501/wjv.v4.i2.56] [PMID: 25964872] ]. While patients with HIV and dyslipidemia may benefit from lipid-lowering therapy according to current ASCVD guidelines [43Stone NJ, Robinson JG, Lichtenstein AH, et al. 2013 ACC/AHA guideline on the treatment of blood cholesterol to reduce atherosclerotic cardiovascular risk in adults: A report of the American college of cardiology/American heart association task force on practice guidelines. Circulation 2014; 129(25)(Suppl. 2): S1-S45.
[http://dx.doi.org/10.1161/01.cir.0000437738.63853.7a] [PMID: 24222016] ], the field is evolving towards the preferential use of more lipid friendly antiretroviral drugs such as integrase inhibitors, including switch strategies [44Maggi P, Di Biagio A, Rusconi S, et al. Cardiovascular risk and dyslipidemia among persons living with HIV: A review. BMC Infect Dis 2017; 17(1): 551.
[http://dx.doi.org/10.1186/s12879-017-2626-z] [PMID: 28793863] ].

An important limitation of this study is that no laboratory or additional exams were requested due to its observational nature. Information on transmission risk group was unavailable due to the nature of the study. Since information was collected from medical records and abdominal circumference was not routinely measured, it was not possible to estimate the frequency of metabolic syndrome. In addition, a number of patients did not have complete laboratory values or complete diagnostic workup, potentially resulting in an underestimation of the prevalence of cardio metabolic comorbidities. While we identified a low proportion of patients on medical therapy for dyslipidemia, we did not determine whether all subjects met current criteria for pharmacologic treatment of dyslipidemia.

The objective of the study was to evaluate the frequency of cardiovascular and metabolic comorbidities. Consequently, other complications such as neoplasia, chronic infections, substance abuse and mental illness were beyond its scope.

The prevalence of cardiometabolic diseases evaluated in this study seems to be similar to those reported for Peruvian general population as shown in Table 5 [50Encuesta nacional de indicadores nutricionales, bioquímicos socioeconómicos y culturales relacionados con las enfermedades crónicas degenerativas 2006. Available from: http://www.ins.gob.pe/repositorioaps/0/5/jer/ estud_vigi_cenan/ESTUDIOS%20EPIDEMIOLOGICOS.pdf-53Instituto Nacional de Estadística e Informática. Peru, Enfermedades Transmisibles y No Transmisibles Lima, INEI 2015.https://www.inei.gob.pe/media/MenuRecursivo/ publicaciones_digitales/Est/Lib1357/index.html]. There is a need for a prospective study that would include comprehensive active diagnostic evaluations in order to better ascertain the prevalence of cardiometabolic comorbidities and cardiovascular risk among adults living with HIV in Peru who are on ARV.

Table 5
Comparison of study results to estimates for the Peruvian general population.

In this sample of middle-aged, clinically stable HIV infected adults, receiving predominantly NNRTI-based initial antiretroviral therapy, a high proportion of metabolic comorbidities were found, with dyslipidemia, obesity and type 2 diabetes mellitus being the most frequent, showing an association to longer duration of ARV and older age (Fig. 1 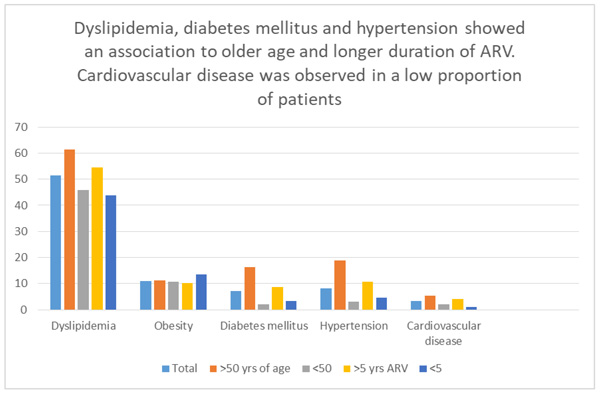 ). Most patients with dyslipidemia were not receiving lipid-lowering therapy. A relatively low frequency of cardiovascular disease was found in comparison to studies from other regions, including Latin America. These results highlight the importance of screening for comorbidities and providing timely and appropriate interventions to address patient’s comorbidities in order to improve long-term outcomes of HIV care in resource-limited settings.

Approval from the institutional review board at each participating site was obtained.

No informed consent was obtained, since none of the study procedures involved direct contact with patients and information was handled anonymously.

Three of the authors, Lourdes Rodriguez, Alberto La Rosa and Raul Gutierrez, are staff of MSD Peru. This is declared as a potential conflict, however this study did not involve the use, evaluation or promotion of any particular drug therapy. They have participated in the design of the study, interpretation of results and preparation of the manuscript. Other authors do not present conflicts of interest to disclose.

Funding for this research was provided by Merck Sharp & Dohme Peru S.R.L.