Ketorolac has advantages over other analgesics as a pre-anaesthetic medication. Considering this in mind, the present meta-analysis aims to identify the effect of oral ketorolac premedication on the anaesthetic efficacy of Inferior Alveolar Nerve Block (IANB) in patients with irreversible pulpitis.

Full-texts of eligible studies were obtained from electronic databases. The extracted data was analysed using non-Cochrane mode in RevMan 5.0 software. Relative risk [95% CI] was calculated for the success of IANB.

Oral ketorolac can be successfully administered as a premedication before conventional inferior alveolar nerve block for endodontic treatment for irreversible pulpitis.

Management of pain is one most important aspect to be addressed while planning treatment procedures in dentistry, especially endodontic treatment. Inferior Alveolar Nerve Block (IANB) has been routinely used to achieve profound anaesthesia during endodontic treatment. However, the success rate of IANB alone has been reported to vary between 15 and 57% [1Reader A, Nusstein J, Drum M. Endodontic anaesthesia -Successful local anaesthesia for restorative dentistry and endodontics. Hanover Park II: Quintessence Publishings 2011; 131-48.]. The practice of prescribing pre-medication using various Non-Steroidal Anti-Inflammatory Drugs (NSAIDs) and opioid analgesics for pulpal inflammation, prior to local anaesthesia, has been explored in various randomised controlled trials [2Parirokh M, Ashouri R, Rekabi AR, et al. The effect of premedication with ibuprofen and indomethacin on the success of inferior alveolar nerve block for teeth with irreversible pulpitis. J Endod 2010; 36(9): 1450-4.
[http://dx.doi.org/10.1016/j.joen.2010.05.007] [PMID: 20728707] -5Aggarwal V, Singla M, Rizvi A, Miglani S. Comparative evaluation of local infiltration of articaine, articaine plus ketorolac, and dexamethasone on anesthetic efficacy of inferior alveolar nerve block with lidocaine in patients with irreversible pulpitis. J Endod 2011; 37(4): 445-9.
[http://dx.doi.org/10.1016/j.joen.2011.01.016] [PMID: 21419287] ]. NSAIDs act by inhibiting cyclooxygenase and recently scavenging of reactive intra-cellular products has been attributed for its anti-inflammatory activity [6Fernandes E, Costa D, Toste SA, Lima JL, Reis S. In vitro scavenging activity for reactive oxygen and nitrogen species by nonsteroidal anti-inflammatory indole, pyrrole, and oxazole derivative drugs. Free Radic Biol Med 2004; 37(11): 1895-905.
[http://dx.doi.org/10.1016/j.freeradbiomed.2004.09.001] [PMID: 15528048] ]. Amongst the NSAIDs, ketorolac has beneficial effects in patients with exaggerated or severe inflammation and it can be used even as an opioid-sparing analgesic drug [7Joishy SK, Walsh D. The opioid-sparing effects of intravenous ketorolac as an adjuvant analgesic in cancer pain: Application in bone metastases and the opioid bowel syndrome. J Pain Symptom Manage 1998; 16(5): 334-9.
[http://dx.doi.org/10.1016/S0885-3924(98)00081-5] [PMID: 9846029] ]. Parenteral ketorolac has been suggested as an appropriate analgesic in the pre-hospital settings in patients with acute pain [8Mallinson TE. A review of ketorolac as a prehospital analgesic. J Paramedic Practice 2017; 9: 522-7.
[http://dx.doi.org/10.12968/jpar.2017.9.12.522] ]. Patients with irreversible pulpitis have moderate to severe type of odontogenic pain consequent to which the success of IANB may be low. In a recent study, it was observed that pulpitis patients without pain have better success rate for IANB than with pain [9Tortamano IP, Siviero M, Costa CG, Buscariolo IA, Armonia PL. A comparison of the anesthetic efficacy of articaine and lidocaine in patients with irreversible pulpitis. J Endod 2009; 35(2): 165-8.
[http://dx.doi.org/10.1016/j.joen.2008.10.020] [PMID: 19166765] ]. Hence, various investigators have tried ketorolac as a pre-anaesthetic medication for improving success of IANB. However, until date, there is no systematic compilation on such studies to observe the relative effect estimate of ketorolac with other pre-anaesthetic drugs. Thus, we carried out the present systematic review and meta-analysis to identify the anaesthetic efficacy of inferior alveolar nerve block after pre-medication with oral ketorolac, for endodontic treatment of tooth diagnosed with irreversible pulpitis.

The protocol for this review was registered with International Prospective Register of Systematic Reviews (PROSPERO) with the registration number CRD42016039273. The review protocol can be accessed at http://www.crd.york.ac.uk/PROSPERO/register_new_review.asp?RecordID=39273&UserID=16309

A through literature search was conducted and completed on 20 May 2016 on Medline (via PubMed), Cochrane central register of clinical trials (CENTRAL) and Database of Abstracts of Reviews of Effects (DARE) using ketorolac [tiab] and inferior alveolar nerve block [tiab] as keywords. This search was further supplemented by hand searching of references from eligible studies. Studies published only in English language were included.

Only those studies with randomized controlled design with the following requirements were included in the present study:

Two authors independently screened all the data and identified abstracts for possible inclusion. Full-text articles were obtained for all the eligible studies. A pre-tested data extraction form was created and both the authors independently extracted trial site, year, trial methods, participants, interventions, and outcomes. Disagreement between the authors was resolved through discussion. The extracted data were analysed using non-Cochrane mode in RevMan 5.0 software. The methodological quality of eligible trials was assessed using the Cochrane collaboration’s tool for assessing the risk of bias. We followed the guidance to assess whether trials took adequate steps to reduce the risk of bias across six domains: sequence generation, allocation concealment, blinding (of participants, personnel, and outcome assessors), incomplete outcome data, selective outcome reporting, and other sources of bias. The judgment was categorized into the low, high or unclear risk of bias [10Higgins JPT, Green S. Cochrane Handbook for Systematic Reviews of Interventions. 5.1.0 2011. Available from www.cochrane-handbook.org]. Due to a limited number of studies, publication bias could not be checked. Percent difference between the experimental (ketorolac group) and control (placebo or any other drug) group were assessed and the mean difference in the percent and percent standard error were considered for final assessment. Relative risk [95% CI] was calculated for the success of IANB. The heterogeneity between the studies was assessed using the Forest plot visually, I2 statistics wherein more than 50% was considered to have moderate to severe heterogeneity and Chi-square test with a statistical P-value of less than 0.10 to indicate statistical significance. Random-effect models were used in case of moderate heterogeneity. The present meta-analysis was conducted and presented in accordance with Preferred Reporting Items for Systematic Reviews and Meta-Analyses (PRISMA) guidelines [11Moher D, Liberati A, Tetzlaff J, Altman DG. Preferred reporting items for systematic reviews and meta-analyses: The PRISMA statement. J Clin Epidemiol 2009; 62(10): 1006-12.
[http://dx.doi.org/10.1016/j.jclinepi.2009.06.005] [PMID: 19631508] ].

Eight studies were obtained during the screening, of which four were found to be eligible to be included for the final review and quantitative synthesis (Fig. 1 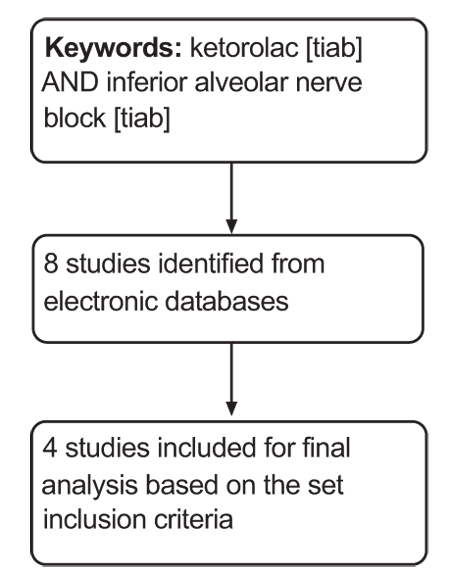 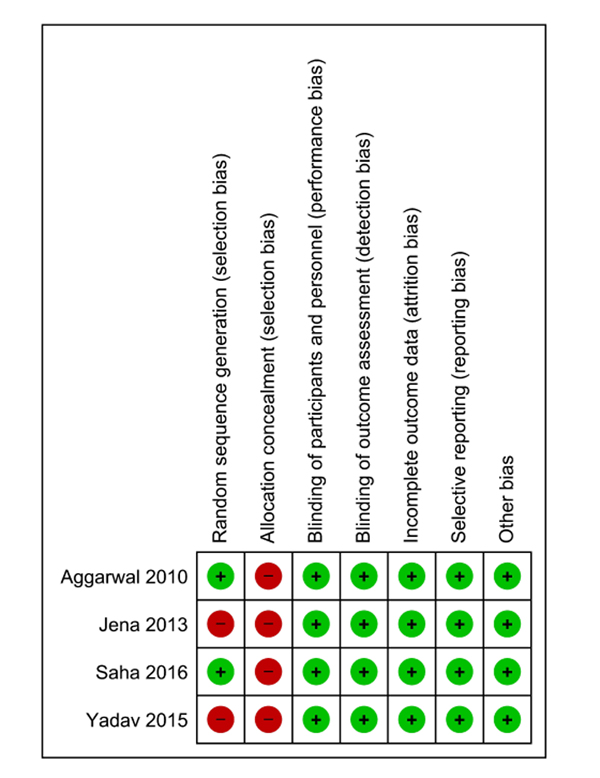 All the four included studies evaluated the success rate of IANB with ketorolac pre-medication in comparison with placebo, in a total of 221 study participants in which 65 successful events were observed in the ketorolac group and 35 in the placebo group. The pooled relative risk for the success of block was observed to be 1.87 [1.36, 2.56] and was statistically significant favouring the use of ketorolac as a pre-anaesthetic medication (Fig. 3

Three out of four studies compared VAS for pain between the ketorolac and placebo group in a total of 171 patients. The pooled mean difference was not statistically significant between the groups with the MD being -13.55 [-33.91, 6.82] (Fig. 4

The four studies included in the systematic review and meta-analysis identified ketorolac oral pre-medication had a statistically significant effect on the success rate of an inferior alveolar nerve block in patients with irreversible pulpitis. However, the pain scale as measured by VAS was not statistically significant. The study is limited in the fact that EMBASE could not be searched for appropriate studies. Nevertheless, checking the cross-references of the included studies is likely to negate this issue.

Considering the advantages of ketorolac over other agents and the results obtained in the present study, we conclude from the systematic review and meta-analysis that oral premedication using ketorolac should be considered before conventional inferior alveolar nerve block for endodontic treatment of irreversible pulpitis. However, long-term randomized controlled trials are warranted.