The Evaluation of Osteoblastic Cell Behavior on Treated Titanium Surface

There are several potential advantages in optimizing the initial events of osseointegration in the benefit of clinical outcome.

The objective of the present study was to evaluate the behavior of osteoblastic cells on surfaces treated by double acid etching using HNO3 and H2SO4.

The data obtained were analyzed using t-test or two-way ANOVA followed by Bonferroni’s test at 95% significance. The titanium surfaces showed average roughness values for the machined and treated surfaces of 0.29 and 1.16, respectively (p<0.05). An increase in cell proliferation was observed, which was corroborated by the viability assay. Both type I collagen secretion and intracellular expression were higher on the double acid-etched surface compared to the machine surfaces (p<0.05).

Previous studies have shown faster osseointegration of dental implants with greater surface area obtained after treatments, characterized by the formation of new bone, which results in improved predictability of immediate or early loading procedures [8Ríos-Santos JV, Menjívar-Galán AM, Herrero-Climent M, et al. Unravelling the effect of macro and microscopic design of dental implants on osseointegration: A randomised clinical study in minipigs. J Mater Sci Mater Med 2018; 29(7): 99.
[http://dx.doi.org/10.1007/s10856-018-6101-1] [PMID: 29946992] -10Buser D, Nydegger T, Oxland T, et al. Interface shear strength of titanium implants with a sandblasted and acid-etched surface: A biomechanical study in the maxilla of miniature pigs. J Biomed Mater Res 1999; 45(2): 75-83.
[http://dx.doi.org/10.1002/(SICI)1097-4636(199905)45:2<75::AID-JBM1>3.0.CO;2-P] [PMID: 10397960] ]. Among the surface treatment types, many commercial brands use subtractive treatment with acids, which in addition to allowing decontamination of the surface with homogeneous removal of the oxide layer, results in greater roughness.

Thus, considering the potential advantages of HNO 3 ftfor titanium surface treatment, the objective of the present study was to evaluate the behavior of osteoblastic cells on surfaces treated by double acid etching using HNO 3 and H 2 SO 4 , in order to optimize the initial events of osseointegration,

Surface characteristics of the samples were assessed using Scanning Electron Microscopy (SEM). The samples were mounted on metallic platforms (stubs) and viewed in a SEM, JEOL 6100 (Jeol USA Inc., Peabody, MA, USA) and the images processed on Adobe Photoshop.

Pre-osteoblastic MC3T3-E1 cells were obtained from the American Type Culture Collection (ATCC, Manassas, VA). The culture conditions were DMEM/F-12 medium (LGC Biotechnology, São Paulo, SP, Brazil) combined with bovine fetal serum at 10% (LGC Biotechnology) and penicillin at 100 U/ml plus streptomycin at 100 μg/ml (Sigma, St. Louis, Missouri, USA). The culture medium was replaced every 2 to 3 days and the cell cultures were maintained in a moist incubator at 37 °C containing 5% CO2 and 95% air. For every experiment using cell culture, it must be considered that the disc of titanium was placed on the bottom of well plate and cell suspension was placed over the disk.

Cell viability was assessed using the 3-[4,5-dimethylthiazol-2-yl]-2,5- diphenyl tetrazolium bromide (MTT, Sigma) method at 24h, 48h and 72h of culture from 3 randomly selected wells from each group. The cells were incubated with MTT at 10% in culture medium (5 mg/mL) at 37 °C for 4 h. The MTT solution was then discarded by aspiration and 200 µL of Dimethyl Sulfoxide (Sigma) was added to each well followed by gentle agitation for 5 min on a plate shaker. Subsequently, 150 μL from each sample solution was transferred onto a fresh 96-well plate. Optical density was assessed at 570-650 nm on a spectrophotometer (Epoch; Bio-Tek, Winooski, VT) and the data expressed as absorbance.

Quantification of Type I Collagen was evaluated at 24h, 48h and 72h. Briefly, culture medium was collected from each sample (machined and double acid etching discs) and centrifuged at 336 g for 10 min and the supernatant was aliquoted and stored at -80°C. Type I Collagen quantification was performed using the Mouse Collagen Type I Kit (Wuxi Donglin Sci&Tech Development, Wuxi/Jiangsu Province, China) following the instructions provided by manufacturer. The values were expressed as ng/ml.

Cells were cultured on the titanium discs from both groups for 24h, 48h and 72h. Cell lysates were then prepared by homogenization at 4°C and centrifuged at 1.000 g for 15 minutes at 4°C. Protein concentration was measured via BCA (Pierce, Rockford, IL). Protein extracts were separated in 10% sodium dodecylsulfate–polyacrylamide gels, transferred onto polyvinylidene difluoride membranes (Hybond; Amersham Biosciences, Piscataway, NJ) and incubated for 1 hour with the primary antibodies anti-type I collagen (1:1000; Abcam, Cambridge, UK) diluted in TBST + 5% skimmed milk and the anti-GAPDH (1:1000; Santa Cruz Biotechnology, Santa Cruz, CA), which was used as an endogenous control. After incubation with a rabbit monoclonal secondary antibody (1:2.500), the reaction was revealed using Western blotting chemiluminescence detection reagents (Opti-4CN; Bio-Rad Laboratories, Hercules, CA) on a Luminescent Image Analyzer (ImageQuant LAS 4000, G&E). Optical density measurements were established on ImageJ 1.37 (National Institutes of Health, Bethesda, MD). All experiments were performed in triplicate. Fold induction was calculated by normalizing relative optical density values to that of the control value.

The experiments were performed in triplicate and the data obtained were analyzed using t-test or two-way ANOVA followed by Bonferroni’s test at 95% significance.

Ultrastructural analysis of the titanium surfaces showed that the double acid-etched surface presented characteristic peaks and valleys of such surface modifying treatment (Fig. 1A 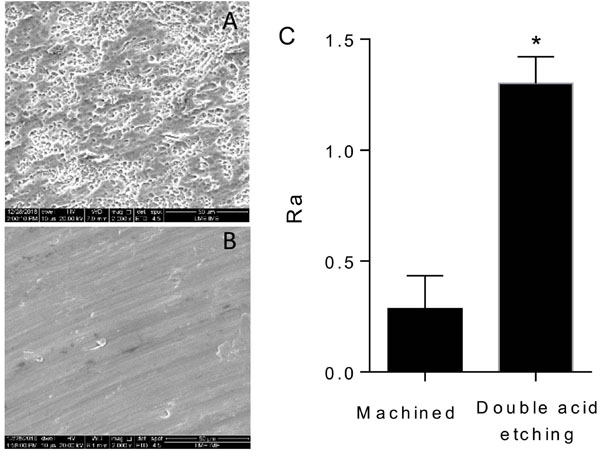 ) whereas the machined surfaces showed irregular grooves resulting from the machining process (Fig. 1B

The results showed an increase in cell proliferation over time, especially after 72h, with significantly greater proliferation of osteoblastic cells on the double acid-etched surface compared to the machined surface (Fig. 2A

). Corroborating the cell proliferation assay, an increase in cell viability was observed on both surfaces over time (Fig. 2B

), though this was not statistically significant (p>0.05).

The results from type I collagen secretion by the osteoblastic cells cultured on both surfaces analyzed are presented in Fig. (3

). The treated surface showed significantly higher synthesis of type I collagen in relation to the machined surface at all evaluated times (p <0.05). The expression of type I collagen by extracts of osteoblastic cell cultures after 24h, 48h and 72h was performed using Western blotting. As demonstrated in Fig. (4

), type I collagen was overexpressed in all analyzed time periods for the discs with treated surface, reiterating the secretion findings obtained from ELISA.

In addition to roughness, the treatment of dental implants surfaces with acids increases surface area for various cellular responses, including adhesion and migration of cells involved in osseointegration [ 13Braceras I, De Maeztu MA, Alava JI, Gay-Escoda C. In vivo low-density bone apposition on different implant surface materials. Int J Oral Maxillofac Surg 2009; 38(3): 274-8.
[http://dx.doi.org/10.1016/j.ijom.2008.12.016] [PMID: 19200692] ] . Thus, different acid etching strategies have been adopted by the companies, involving type, concentration, time and temperature of the acids used for the treatment of implant surfaces. Although many studies have been conducted using H2SO4 and HCl solution for titanium surface treatment, the present study was carried out to evaluate the etching treatment with HNO3 and H2SO4, in the initial events of osseointegration.

Implant installation into the alveolar bone induces a cascade of healing events starting with the formation of a clot followed by maturation of the bone in contact with the implant surface. From the biological point of view, osseointegration is associated with decreased inflammation and gene expression upregulation associated with osteogenesis, angiogenesis and neurogenesis during the early stages of wound healing [20Salvi GE, Bosshardt DD, Lang NP, et al. Temporal sequence of hard and soft tissue healing around titanium dental implants. Periodontol 2000 2015; 68(1): 135-52.
[http://dx.doi.org/10.1111/prd.12054] [PMID: 25867984] ]. Bone remodeling begins with osteoclast bone resorption characterized by the dissolution of inorganic bone matrix. Osteoblasts then secrete non-collagenous proteins that permeate surface irregularities and undergo mineralization, forming a thin layer of non-collagenous mineralized extracellular matrix known as the “cement line”. Subsequently, osteoblasts secrete collagen fibers that become organized, mineralized and bond to the cement line [21Davies JE. Bone bonding at natural and biomaterial surfaces. Biomaterials 2007; 28(34): 5058-67.
[http://dx.doi.org/10.1016/j.biomaterials.2007.07.049] [PMID: 17697711] ]. Interestingly, both ELISA and Western blotting assays demonstrated that the surface treatment used in this study was able to stimulate the osteoblastic cells to synthesize larger amounts of type I collagen.

Based on the results obtained in vitro , implant surfaces treated by double acid etching with HNO 3 and H 2 SO 4 positively affected the early events of the interaction between titanium and osteoblastic cells.

The datasets analyzed during the current study are available from the corresponding author upon request.

The authors wish to thank Pollyanna Tombini Montaldi for her excellent technical support.