Microstructural Observation with MicroCT and Histological Analysis of Human Alveolar Bone Biopsy from a Planned Implant Site: A Case Report

The subject was a 53-year-old male. An alveolar bone sample was obtained from the site of the lower left first molar, before dental implant placement. Although the details of the trabecular structure were not visible with conventional computed tomography, micro-computed tomography (microCT) three-dimensional images of the alveolar bone biopsy sample showed several plate-like trabeculae extending from the lingual cortical bone. Histological observations of the bone sample revealed trabeculae, cuboidal osteoblasts, osteoclasts and hematopoietic cells existing in the bone tissue at the implantation site. Bone metabolic markers and calcaneal bone density were all within normal ranges, indicating no acceleration of the patient’s bone metabolism.

Using microCT, and histological and histomorphometrical techniques, a great deal of valuable information about the bone tissue was obtained from a biopsy sample extracted from the patient’s planned implant site.

In this case report, an alveolar bone sample was extracted from a patient’s implant recipient site and its bone tissue was directly assessed using micro-computed tomography (microCT), and histological and histomophometric techniques, in order to obtain precise, detailed information (including bone cell information) from this sample, with respect to bone remodeling and bone volume.

The patient was a 53-year-old male. About 30 years previously, his lower left first molar had been extracted at a private dental clinic following severe dental caries, with a fixed dental bridge having been constructed in the region of the missing tooth. Approximately fourteen years later in 1991, a new fixed bridge was constructed at the same site, at our hospital’s dental clinic. In 2005, the patient returned, and requested implant treatment to replace the bridge (Fig. 1 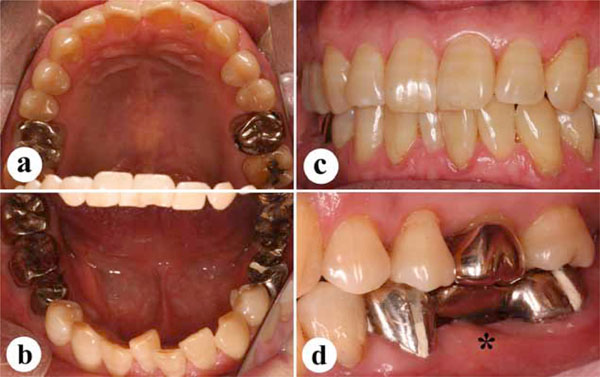 Using a trephine bur, an alveolar bone sample (column-shaped; 2 mm in diameter, 7 mm in height) was obtained from the implant site (Fig. 2a 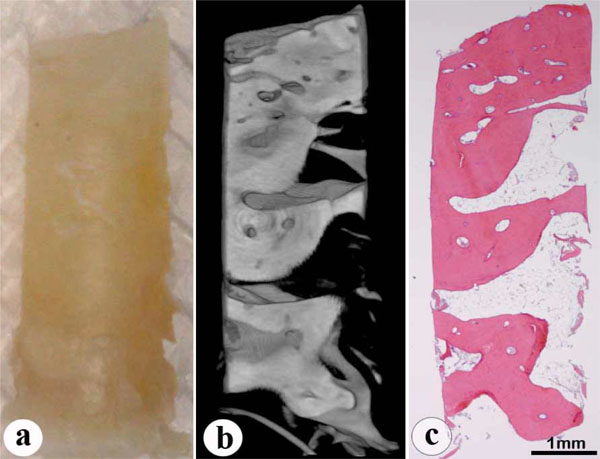 ), before the the implant was placed (5 mm in diameter, 13 mm in height, Brånemark system®, Nobel Biocare, Gothenburg, Sweden). The sample was fixed in 4% formaldehyde solution for 24 hours.


After fixation, the fine trabecular structures of the sample were observed with microCT (Fig. 2b

The patient enrolled in the study received a verbal and written explanation of its goals and procedures, and subsequently signed an informed consent form, prior to participating in the study. All the procedures involved had already been approved by the Niigata University Ethics Committee (20-R13-08-06).

The panoramic and periapical radiographs revealed an irregularly-shaped radiolucency under the alveolar crest at the planned implant site (Fig. 3 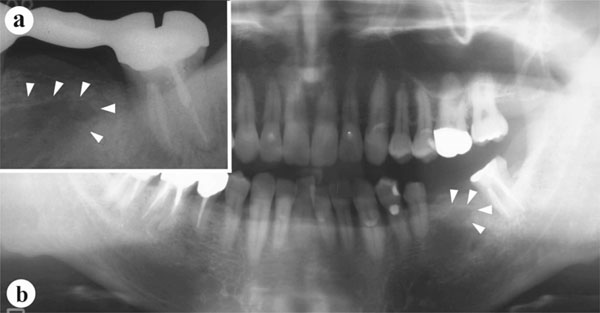 ), and the trabeculae were not clearly visible with ordinary CT (Fig. 4 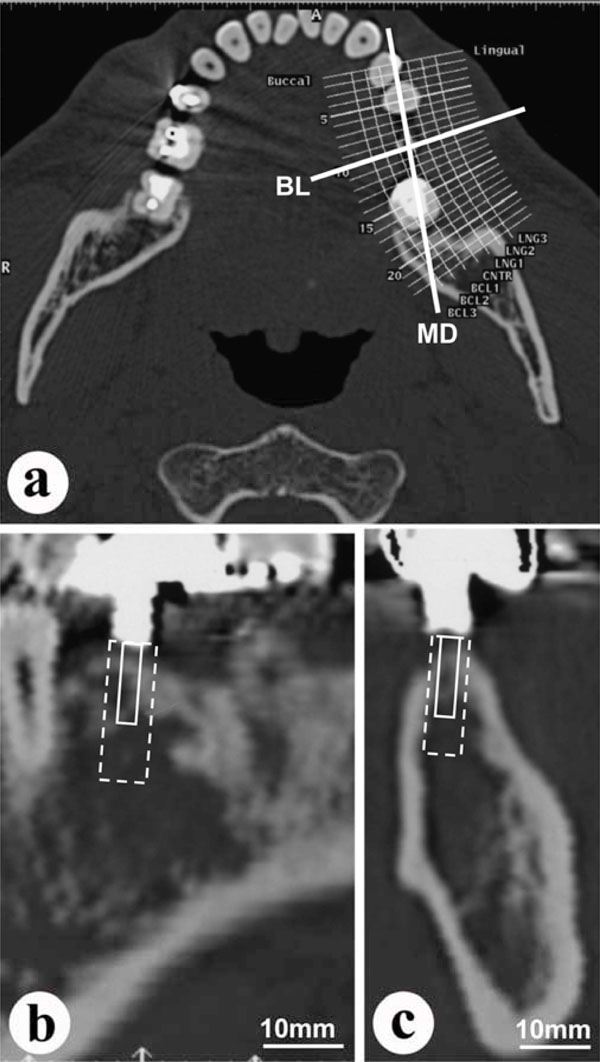 ). Blood and urine analyses indicated that the patient’s bone metabolism was within the normal range (Table 1). The calcaneal bone density was slightly lower than the average for the same age group, but still within the standard deviation (SD) range (Table 1). MicroCT three-dimensional (3D) images of the bone sample clearly showed several plate-like trabeculae extending outward from the lingual cortical bone (Fig. 5

). These trabeculae were poorly connected and widely separated.


Histological observations revealed that the marrow space was filled with adipose tissue (Fig. 6a 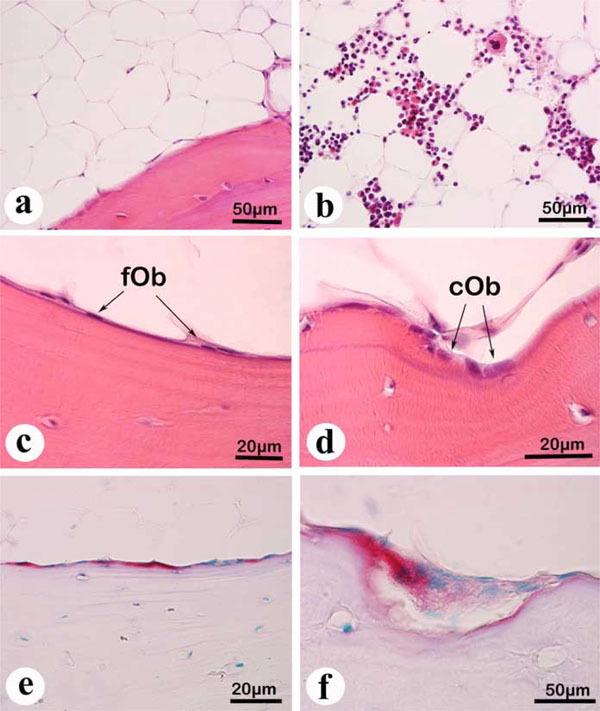 ), and that most of the bone surface was covered with flattened osteoblasts (Figs. 6a

). However, some hematopoietic cells were observed in the bone marrow (Fig. 6b

), and cuboidal osteoblasts were also seen on the bone surface in a few regions (Fig. 6d

). The histomophometricdata are shown in Table 2.


The dental implant is still functioning well, with no bone loss detectable on X-rays (Fig. 7 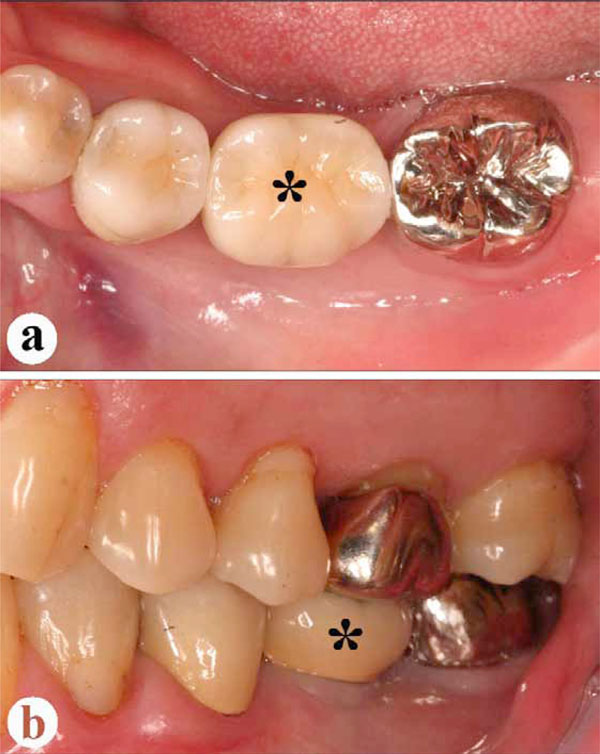 Several thin trabeculae extending outward from the lingual cortical bone were clearly visible on the microCT images of the sample taken from the implant site, although the trabecular structure was unclear in the CT images obtained with conventional CT. This led us to expect that the implant would have enough direct contact with the cortical and trabecular bone surfaces for sufficient primary stability. The existence of cuboidal osteoblasts, together with a small number of osteoclasts, also underlined the occurrence of bone remodeling in this region.

The presence of marrow spaces containing mesenchymal cells, together with blood cells surrounding the implant surfaces, have been reported to be of great importance in achieving implant osseointegration [12Marco F, Milena F, Gianluca G, Vittoria O. Peri-implant osteogenesis in health and osteoporosis Micron 2005; 36: 630-44.]. In our patient’s alveolar bone, although the marrow space was mostly occupied with adipose tissue, blood cells were also found in small areas of the marrow. We were therefore able to expect sufficient osseointegration would be achieved between bone and implant [8Nkenke E, Hahn M, Weinzierl K, Radespiel-Troger M, Neukam FW, Engelke K. Implant stability and histomorphometry: a correlation study in human cadavers using stepped cylinder implants Clin Oral Implants Res 2003; 14: 601-9.], and in fact, the implant has actually been functioning well for two years since its insertion.

Calcaneal SOS and bone turnover markers of our patient were all within normal ranges. This would indicate that this patient’s systemic bones were in normal condition, and that he was not at risk for osteoporotic fractures: calcaneal SOS in particular has been reported to be an effective predictor of the risk of osteoporotic fracture [13Turner CH, Peacock M, Timmerman L, Neal JM, Johnson CC Jr. Calcaneal ultrasonic measurements discriminate hip fracture independently of bone mass Osteoporos Int 1995; 5: 130-5.]. Histological observation indicated that his alveolar bone status was also normal. Although the present study is a case report, it would seem to suggest the more general possibility of predicting a patient’s systemic bone condition using alveolar bone biopsy. If histomorphometric data for many alveolar bone samples could be gathered and compared with the systemic bone metabolic markers and/or bone mineral densities of the same subjects, clinically-useful diagnostic reference values for alveolar bone histomorphometry might be established. Recently, some studies have tried to determine the presence of osteoporosis based on minute alveolar bone changes [14Arisaka R, Matsuo A, Chiba H, et al. Preliminary clinical study to evaluate the relationship between systemic bone turnover and the microstructure of the alveolar bone Oral Sci Int 2009; 6: 27-35.-16Yamashita-Mikami E, Tanaka M, Sakurai N, et al. Correlations between alveolar bone microstructure and bone turnover markers in pre- and post-menopausal women Oral Surg Oral Med Oral Pathol Oral Radiol Endod 2011. (in press)]. In the future, more data will be necessary in order to establish clinical guidelines for when these microCT procedures would be recommended, and when they would be unnecessary, due to the presence on conventional medical CT and/or CBCT images of sufficient alveolar bone trabeculae. More data would also allow for the creation of morphometric standards for quantifying the bone quality required for osseointegration to occur, and resist the loading stresses arising from mastication.

Due to the invasive nature of bone biopsies done on ribs or iliac bones, it is not easy to convince healthy subjects to undergo them. However, it is relatively simple to use an alveolar bone tissue extracted as part of the implant cavity preparation process, for the purpose of biopsy samples, with few ethical problems involved as well. It must be admitted that the alveolar bone sample extracted during the implant operation is smaller than samples obtained from the iliac bone or rib. On the other hand, such invasive biopsies involving the rib or iliac bone may be avoidable thanks to this procedure, as sufficient information about systemic bone metabolism may be obtainable from the alveolar bone sample.

Another limitation of the procedure discussed in this case study is that the alveolar bone sample can only be analyzed once the operation has been carried out. For this reason, such samples cannot be used in making a decision about the initial viability of the implant treatment: for this purpose, conventional techniques involving CT imaging of the alveolar bone are generally used. However, once the operation has been done and the sample obtained, the information obtained from it could be useful for the clinical evaluation of patients’ systemic bone conditions, as well as predicting the success of implant osseointegration.

An alveolar bone biopsy sample was obtained from a 53-year-old male patient’s mandibular bone during implant cavity preparation. Important information was directly obtained from this sample using microCT and histological and histomorphometric techniques, such as the existence of thin trabeculae and several active bone cells. Such a detailed understanding of the condition of the bone at a planned implant site, obtained prior to the insertion of the implant, would therefore seem to be useful in predicting its successful osseointegration.

This work was supported by a Grant-in-Aid for Research Activity Start-up from JSPS (No. 23890061). The authors also wish to thank Associate Professor Ian Megill of Niigata Seiryo University, for his assistance in preparing the manuscript.