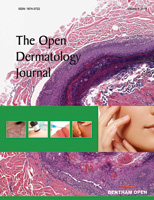 Nail unit melanoma (NUM) poses a considerable treatment challenge, particularly in cases with in situ or early invasive lesions, and wide excision with phalanx amputation. For post-excisional skin defects, stump plasty and/or split-thickness skin grafting may cause persisted irritation and ulceration as a post-operative complication, because of the insufficient underlying tissue volume, vascularity, and stability.

To seek out other superior management avoiding disadvantages associated with the conventional NUM surgery.

Three consecutive cases with NUM were treated by a novel two-phase surgical procedure using a commercially available dermal regeneration template; as the first phase, the lesional nail unit was excised and subsequently covered by a dermal regeneration template onto the phalangeal bone surface, allowing development of robust granulation with extracellular matrix and vascular network. Thereafter, the second phase employed a full-thickness skin grafting.

All three cases accomplished complete removal of the NUM lesion, and achieved a good cosmetic and functional outcome, maintaining physiological firmness, contour, and less contraction and atrophy of the overlying skin. They did not complain of major post-operative complications.

Our two-phase approach using a dermal regeneration material is a satisfactory and straightforward technique, achieving a substantial benefit functionally and cosmetically in the post-operative period. We propose that the additional use of a tissue regeneration material can provide superior results for the reconstruction step of excised NUM.

A 60-year-old Japanese man was presented with longitudinal melanonychia suspicious for NUM in situ on his left thumb (Fig. 1a 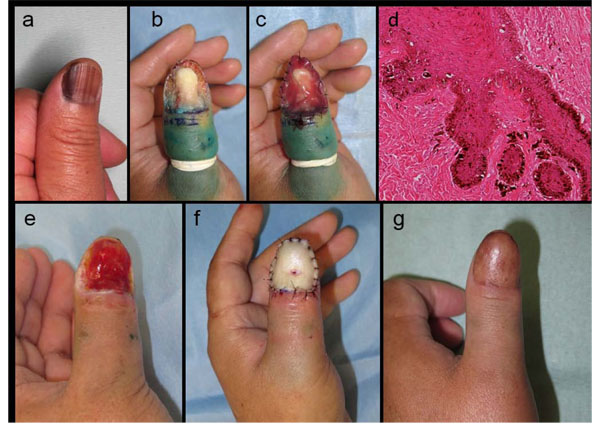 ). We performed a wide skin excision extending vertically to the subperiosteal layer (Fig. 1b

), and then placed a dermal regeneration template, INTEGRA®, directly onto the phalangeal bone surface with anchoring suture (Fig. 1c

), compatible with NUM in situ. The lateral and vertical margins were free of tumor. A month after placing the INTERA® template, the surgical defect was fully covered by abundant granulation bed (Fig. 1e

), followed by a PSVNSG donated from his subclavicular skin (Fig. 1f

). Subsequently, a local injection of IFN-β was done as an adjuvant therapy. One year after the skin grafting, the patient’s affected thumb has almost recovered to the original length and volume, and maintained its contour and texture (Fig. 1g

). He has had no recurrence of NUM and no post-operative complication, such as irritation and fragility of the overlying skin, for 4 years after surgery.

A 62-year-old Japanese man presented to our hospital for evaluation of possible NUM on his left great toe (Fig. 2a 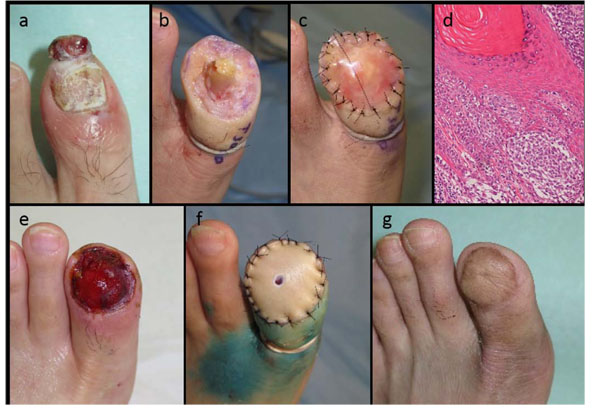 ). At the first examination, however, the pigmented nail unit was fully covered with the dirty marks and crusts. Therefore, we first biopsied the lesional skin for the confirmative diagnosis of melanoma, performed a wide skin excision including the periosteal layer tissue, and then scraped the minimum amount of neighboring bone that was subsequently covered by the INTEGRA® template (Figs. 2b

). Pathologically, the tumor mass consisted of atypical melanocytic nests at the hyponychium and intraepidermal spreading of individual melanoma cells along the basement membrane (Fig. 2d

), and a PSVNSG was performed using the patient’s abdominal skin (Fig. 2f

), with local injection of IFN-β for adjuvant therapy. Six months after the skin grafting, his great toe retained substantial volume and firmness with smooth texture of the overlying skin, although it was slightly shortened compared to the contralateral great toe (Fig. 2g

). He remains free from the local recurrence of melanoma during 1-year of follow-up, as well as incidence of post-operative complication in the grafted skin.

A 78-year-old Japanese man with NUM experienced nail destruction on his right thumb prior to his first admission (Fig. 3a 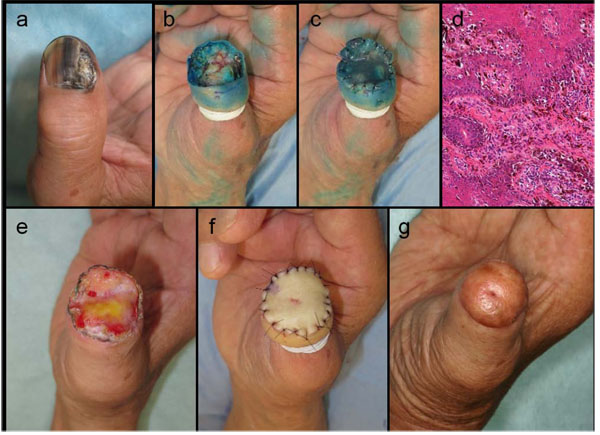 ). We performed a wide skin excision, as was in our two cases described above, and disconnected the protuberant distal phalanx (Fig. 3b

). Subsequently, the INTEGRA® template was sutured briefly onto the defected tissue (Fig. 3c

), all of which were completely resected. One month later, the regenerated dermal tissue completely covered the surgical defect (Fig. 3e

). A PSVNSG was then performed using a graft harvested from the patients’ subclavicular skin (Fig. 3f

). After the operation, he was followed by a local injection of IFN-β. One year after the skin grafting, the affected thumb had maintained the substantial volume with only minimal shortening from its original length (Fig. 3g

). There is no recurrence of melanoma.

We treated three cases of NUM by a two-phase surgical procedure designed to maintain, as much as possible, their original length, contour, and volume of the affected fingers, and obtained a favorable outcome in terms of cosmetic and functional reconstruction. This approach utilized a dermal regeneration template INTEGRA®, attributing to shift towards a later reconstruction step with PSVNSG.

INTEGRA® is a bilaminar membrane system consisting of porous bovine tendon collagen and shark glycosaminoglycan (chondroitin-6-sulfate), covered with the superficial silicone layer as a temporary epidermal substitute. The structure and regeneration process of this dermal template have been well described by Burke et al. [8Burke JF, Yannas IV, Quinby WC Jr, Bondoc CC, Jung WK. Successful use of a physiologically acceptable artificial skin in the treatment of extensive burn injury. Ann Surg 1981; 194(4): 413-28.
[http://dx.doi.org/10.1097/00000658-198110000-00005] [PMID: 6792993] ]; the spongy bovine collagen layer acts as a scaffolding matrix to support the ingrowth of host fibroblasts and endothelial cells, known as a tri-dimensional neo-dermis, and is gradually saturated with integration of host (endogenous) collagens and extracellular matrices. After vascularization in the regenerated dermis, the superficial silicone layer is easily removed and replaced with an epidermal autograft onto the surface. The regenerated dermal tissue induced by INTEGRA® is applicable for covering any type of small tissue defects with capillary beds, like exposed bone or tendon [9Chou TD, Chen SL, Lee TW, et al. Reconstruction of burn scar of the upper extremities with artificial skin. Plast Reconstr Surg 2001; 108(2): 378-84.
[http://dx.doi.org/10.1097/00006534-200108000-00015] [PMID: 11496178] ]. In our present case series and initial trial [10Iino S, Kiyohara T, Hasegawa M, et al. Proceedings of the 29th Annual Meeting of the Japanese Association of Dermatologic Surgery. 1994 Sep 13-14; Wakayama, Japan: Wakayama Medical University 1995.], the INTEGRA® template may thus provide a safety and satisfactory regeneration result within at least one month after invasive excision to the subperiosteal tissue layer of the nail unit.

PSVNSG, first reported in 1980, is a method for full-thickness skin grafting that preserves the vascular network within the areolar tissue between the dermis and fat layer [7Tsukada S. Transfer of free skin grafts with a preserved subcutaneous vascular network. Ann Plast Surg 1980; 4(6): 500-6.
[http://dx.doi.org/10.1097/00000637-198006000-00009] [PMID: 7002007] ]. It is considered to organize superior results in the overall reconstruction outcomes compared to other skin graft methods. However, PSVNSG requires preparation of the sufficient post-excisional wound bed to ensure the proper skin engraftment [11Shimada K, Aoki Y, Ide Y, Ishikura N, Kawakami S. Burn due to misuse of an acetylene gas burner: A case report. Burns 1999; 25(7): 666-8.
[http://dx.doi.org/10.1016/S0305-4179(99)00044-3] [PMID: 10563697] ]. On this basis, the combined use of the INTEGRA® template and PSVNSG can be a preferable approach for the NUM surgery, although the template would also provide a potential benefit with split-/full-thickness skin graft procedure.

Another advantage of our two-phase reconstruction method is that we can confirm a conclusive diagnosis of the excised skin lesion histologically between the two phases, achieving a curative skin grafting at the second reconstruction step. This enables us to keep the opportunity for further excision in the case of an incomplete excision, without compromising our repair. In such a case, we would simply remove and then reput the INTEGRA® following further excision.

Based on the several post-operative performance, we propose that the two-phase method using a dermal regeneration material is an advanced and reliable option for the treatment of NUM.