Enterococci rank among leading cause of nosocomial bacteremia and urinary tract infection in hospital and community acquired infections. Several traits that may contribute to enhanced virulence have been identified in Enterococci. Extracellular surface protein (Esp) is a virulence factor that contributes in biofilm formation and resistance to environmental stresses. In this study we aimed to determine occurrence of esp in E. faecium and E. faecalis isolates isolated from urinary tract infections and to investigate whether there is any correlation between presence of esp and antibiotic resistance. One hundred and sixty six isolates were collected from patients with UTI and after identification by biochemical and PCR, antibiotic resistances were examined. The presence of esp was investigated by primer-specific PCR. 43.3% of isolates identified as E. faecium and 56.7% as E. faecalis. The esp gene was found in 76.1% of E. faecium isolates and 77.9% of E. faecalis isolate. There were significant correlation between esp positive E. faecium and resistance to Vancomycin (p<0.01), also in E.faecalis we found correlation between esp positive and resistance to Ampicillin, Chloramphenicol and Tetracycline (p<0.01, p<0.01, p<0.01 respectively). Occurrence of esp in our isolates from urinary tract infection was high that indicates importance of this gene in urinary tract infections and shows importance of ability to forming biofilm and hydrophobicity of surface of Enterococci for causing urinary infection by Enterococci. Also, our finding showed significant correlation between resistance to antibiotics and presence of esp in Enterococci.

Extracellular surface protein (esp) is a cell wall associated protein first described in Enterococcus species by Shankar et al. [9Shankar V, Baghdayan AS, Huycke MM , et al. Infection-derived Enterococcus faecalis strains are enriched in esp, a gene encoding a novel surface protein Infect Immun 1999; 67: 193-200.]. It is thought to promote adhesion, colonization and evasion of the immune system, and to play some role in antibiotic resistance [1Foulquié Moreno MR, Sarantinopoulos P, Tsakalidou E , et al. The role and application of enterococci in food and health Int J Food Microbiol 2006; 106: 1-24.]. It has also contributions in biofilm formation of Enterococci, which lead to resistance to environmental stresses, and adhesion to eukaryotic cells, such as those of the urinary tract [10Borgmann S, Niklas DM, Klare I , et al. Two episodes of vancomycin-resistant Enterococcus faecium outbreaks caused by two genetically different clones in a newborn intensive care unit Int J Hyg Environ Health 2004; 207: 386-9.]. Shankar et al. showed contribution of esp in the persistence of Enterococci in the animal model of urinary tract infections [11Shankar N, Lockatell CV, Baghdayan AS , et al. Role of Enterococcus faecalis surface protein Esp in the pathogenesis of ascending urinary tract infection Infect Immun 2001; 69: 4366-72.]. In this study we aimed to determine presence of esp gene in E. faecium and E. faecalis isolated from urinary tract infections and to investigate any relationship between presence of esp gene and rate of antibiotic resistance.

Chi-square test (or Fisher exact test) was performed for data analysis. P values below 0.05 were considered to be significant. Statistical analysis was done by Spss. 21 software.

From 166 clinical isolates of urinary tract infections of Enterococci, 59.7% of isolates were from females and 40.3% from males. By biochemical differentiation and PCR for specific genes, 43.3% of isolates were identified as E. faecium and 56.7% as E. faecalis. Antibiotic resistance of strain described by disc diffusion (Figs. 1 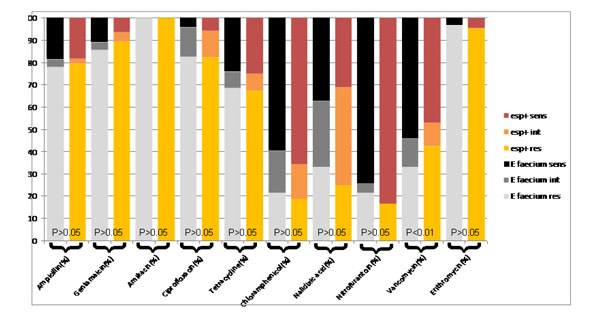 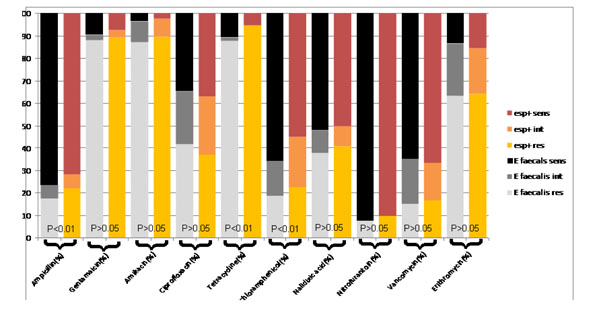 ). In E. faecalis we revealed correlation between resistance to Ampicillin, Chloramphenicol and Tetracycline (p<0.01, p<0.01 and p= 0.006 respectively) and presence of esp gene (Fig. 2

) in E. faecalis. In a study by Billstrom et al, they revealed strong correlation between esp carriage and antimicrobial resistance to Ampicillin and Ciprofloxacin and Imipenem in clinical blood culture isolates of E. faecium [24Billström H, Lund B, Sullivan A , et al. irulence and antimicrobial resistance in clinical Enterococcus faecium Int J Antimicrob Agents 2008; 32: 374-7.]. But in our urinary tract isolates of E. faecium, we didn’t find similar correlation (Fig. 1

In conclusion, our finding provides additional evidence for the presence of esp in Enterococcus isolates from urinary tract infection and high rate of antibiotic resistance may lead to strong biofilm formers and strong adherent to host cells. These three factors may play an important role in enterococcal infections. The presence of these bacteria in urinary tract infection in addition to its multi resistance, close attention should be given to these strains in order to reduce risk for development of disease caused by Enterococci in other areas of the body. Furthermore, additional studies about role of esp expression on biofilm formation of enterococci is needed.

We would like to thank all staff of educational hospitals for cooperation in collecting samples and antibiogram of isolates. Also we thank Dr. Hossein Navidinia for their helpful comments on manuscript.

This study was granted by Iran National Elite foundation for Hossein Samadi Kafil.