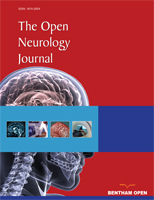 The purpose of this study is to investigate the epidemiology of the idiopathic normal pressure hydrocephalus (iNPH) in Germany.

This is the first population-based epidemiologic study on iNPH in Germany covering a ten year period.

Better understanding of the pathophysiology of iNPH together with advances in brain imaging prompted interest in this condition by health care providers and policy makers. The epidemiology of iNPH in the industrialized countries, specifically the prevalence of the disease among all forms of dementia, is, however, difficult to estimate. Data from Vestfold County in Norway with a stable population of 220000 inhabitants suggest a prevalence of probable iNPH of 21.9 and an incidence of 5.5 per 100,000 [2Greitz D, Hannerz J, Rähn T, Bolander H, Ericsson A. MR imaging of cerebrospinal fluid dynamics in health and disease. On the vascular pathogenesis of communicating hydrocephalus and benign intracranial hypertension. Acta Radiol 1994; 35(3): 204-11.
[PMID: 8192953] ], with up to 1.5 / 100,000 patients undergoing surgery annually [3Brean A, Fredø HL, Sollid S, Müller T, Sundstrøm T, Eide PK. Five-year incidence of surgery for idiopathic normal pressure hydrocephalus in Norway. Acta Neurol Scand 2009; 120(5): 314-6.
[http://dx.doi.org/10.1111/j.1600-0404.2009.01250.x] [PMID: 19832773] ].

In Germany, researchers interested in the epidemiology of iNPH often refer to data from the cross-sectional Starnberg study, a door-to-door survey conducted in two rural villages in the Isar valley in Bavaria, Southern Germany, almost two decades ago. The study was originally intended to study Parkinsonism, not iNPH, and may thus suffer from substantial misclassification bias [4Trenkwalder C, Schwarz J, Gebhard J, et al. Starnberg trial on epidemiology of Parkinsonism and hypertension in the elderly. Prevalence of Parkinson’s disease and related disorders assessed by a door-to-door survey of inhabitants older than 65 years. Arch Neurol 1995; 52(10): 1017-22.
[http://dx.doi.org/10.1001/archneur.1995.00540340109020] [PMID: 7575219] ]. The researchers claimed a prevalence of iNPH-related gait disorders of 4 / 982 (0.41%). This estimate is not representative for the German population either.

Compulsory health insurance in Germany is covered by various insurance bodies and companies. The Barmer GEK is one of the largest statutory insurance companies and provides health insurance for 8.7 million people (about 10% of the entire German population, see http://www.barmer-gek.de). German data safety and protection rules are very strict and limit research activities based on routine administrative hospital and discharge information.

Yet, Barmer granted these researchers access to anonymized datasets to answer the following key questions

Barmer allowed the investigators to search several combinations of hospital diagnoses according to ICD-9 (International Classification of Diseases, Ninth Revision) and OPS codes (German modification of the International Classification of Procedures in Medicine [ICPM], and official classification of surgical procedures). Due to legal restrictions, any data allowing for identifying individual patients, medical institutions or physicians in any form were kept anonymous. The number of individuals insured by Barmer between 2003 and 2012 ranged from 6.8 to 8.7 million. Cumulative data from all Barmer-covered subjects discharged from hospital care between 2003 and 2012 were included in the study.

Based on literature data and own experience and expertise, the authors developed a query logic using seventeen ICD-9 and OPS item combinations to trace iNPH cases (or insured subjects with a high probability of iNPH). Table 1 summarizes the query steps.

Translation of the epidemiological questions into a query logic of operations of ICD and OPS codes.

The number of patients meeting the combinations of criteria of the queries Q1 to Q18 were calculated as follows:

Q1 Incidence of Hydrocephalus in Germany

Q3, Q4 Complications and revision surgery in patients with NPH

The number of patients who underwent revision surgery was queried by the combination of the ICD code for iNPH (G91.20) and the OPS codes for shunt implantation and shunt revision (5-023.00 resp. 5-023.10 AND 5-024*). The query was split into a) va shunts and b) vp shunts. Q4 traced revision operations that were performed in the year following initial shunt surgery, thus representing late complications.

Q8, Q9 Mechanical complications and over-drainage in patients with NPH

Mechanical complications were queried by the OPS for any mechanical dysfunction of hydrocephalus shunt valves (T85.0). To calculate the incidence of patients with over-drainage complications, the ICD code G97.2 was added.

Q10 determined the frequency of ICP measurement for NPH diagnostics. Q11 targeted the number of patients who underwent surgery after being diagnosed with NPH by ICP measurement.

Q12 Prevalence of NPH in Germany

The prevalence of NPH independently of a procedure was ascertained by the G91.20 code.

Co-morbidities were evaluated using a combined query for patients who were simultaneously coded with NPH and Alzheimer's disease (Q13) or Parkinson´s disease (Q14). Q15 and Q16 assessed co-morbidity in patients who underwent vp shunt surgery.

Q18 was used to calculate the frequency of ETV procedures for any kind of hydrocephalus.

The prevalence and incidence of iNPH were reported as n/100,000 inhabitants. Since the number of Barmer insurants represent almost one tenth of German population, epidemiological estimates were regarded representative for the entire nation.

This study was exploratory, and no inferential statistics were applied. Presuming a Poisson distribution, 95% confidence intervals (CI) were calculated for all rate and ratio estimates. STATA 11.2 software was used for all descriptive analyses.

The results of invidual queries are shown in Tables 2-8. 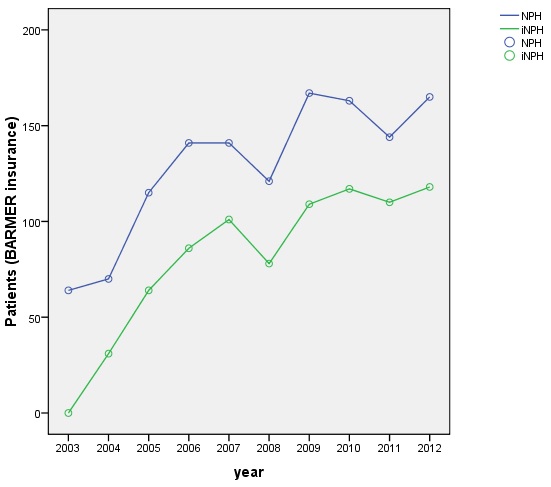 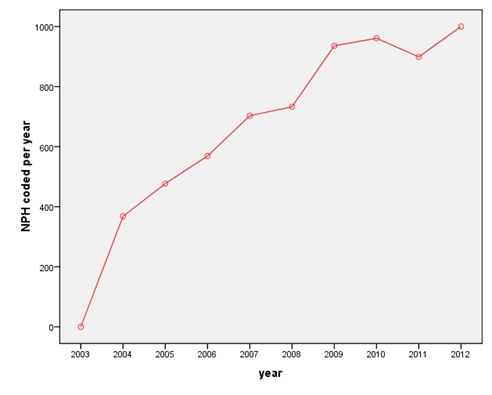 Among the annual mean number of 129 NPH patients in the Barmer population undergoing surgery, the mean number of infectious complications according to different definitions ranged from 0 to 1 per year (Table 5). Also, the frequency of reported over-drainage events was extremely low, suggesting some underreporting. It is likely that shunt infections and mechanical complications were frequently not coded correctly since only the general OPS code for shunt revision is relevant for reimbursement under German Diagnosis Related Group (DRG) conditions (Tables 5, 6).

Frequencies of mechanical complications in NPH patients as coded for the Barmer population.

The mean annual number of ETV procedures for all types of hydrocephalus ranged from 51 to 487 during the 10-year observational period (Fig. 3 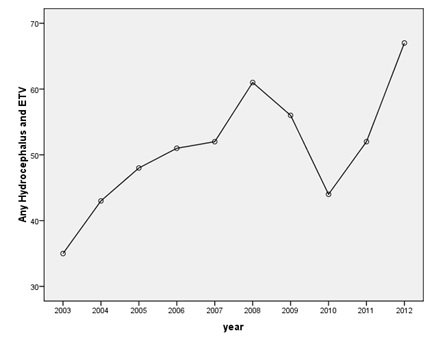 This study is the first nationwide, population-based investigation on the epidemiology of idiopathic normal pressure hydrocephalus (iNPH) in Germany. It is based on a representative sample of 7.5 million patients covered by the Barmer health insurance company. The incidence of iNPH calculated in this study resembled to that reported in ten previous investigations. These studies included between 233 and 4.6 million subjects and suggested annual incidence rates between 1.09 and 5.5 / 100,000.

The cohort investigated here resembles a population that may have included a large number of false positives and may have excluded false negatives. Different definitions of iNPH are a likely source for the variation in incidence rates as shown in different studies (Table 9).

The low incidence of infectious and mechanical complications observed in this study differs markedly from literature estimates which range from 3 to 12% (4;14-17). We recently found over-drainage rates of 30% with conventional programmable valves in a randomised multicentre study (6).

Available prevalence data were often derived from selected populations such as inhabitants of nursing homes and are therefore not comparable to the present results.

Also, the risk of selection bias may be higher in smaller populations, we could not substantiate a correlation between the reported prevalence data and the population size of the studies (Table 8). So, the prevalence reported by the different authors seems to be not very stable.

Our findings suggest a 10times higher rate of ETV in all hydrocephalus cases compared to iNPH. This is in contrast to another recent population-based study on 12,845 and 652 (20:1) discharges after ETV and VPS recorded between 2007 and 2010 (18).

Based on the analysis of ca. 7.5 million insurants of the Barmer health insurance we estimated an incidence of iNPH for Germany of 1.08 / 100,000 / year.

The authors declare that they have no competing interests.

Data from the Barmer health insurance company provided by the Barmer Berlin / Brandenburg bureau form the basis of this study. We like to thank the bureau for allowing us access to these data. However, the interpretation and conclusions presented in this manuscript do not necessarily represent the views of Barmer.